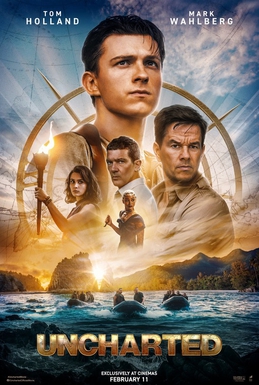 The promotional poster for "Uncharted," starring Tom Holland. By Courtesy of Wikimedia Commons
By Monique I. Vobecky, Crimson Staff Writer

With intrigue, adventure, and an eye-drawing cast list, Ruben Fleischer’s “Uncharted” takes on the task of bringing a popular video game to the big screen — and the result is disappointing.

While “Uncharted” had the opportunity to display Holland’s acting range, the underdeveloped script — notably the biggest hindrance to the movie’s success — renders it nearly impossible for him to realize his potential. Writers had the opportunity to deepen the character arc of the well-known video game character, an all-knowledgeable historian and explorer. However, most of Holland’s appearances fell short of being memorable, with his performance in the movie frequently relying on his ability to execute complex action sequences.

Holland fits well in the role of Nathan Drake, largely because of his successful execution of these stunts. The seamless execution of these stunts was remarkable, making them one of the major highlights of the film. Throughout the video games, Drake uses his historical knowledge and adventuring expertise to find the treasure he is after. Through this lens, it makes sense that the focus of the film should be on Drake’s skill — and Holland succeeds at highlighting this expertise in fighting. However, Drake in this film, while having the opportunity to be a remarkable character capable of solving any problem, feels stale as a character. Holland’s Drake falls short of the confident explorer version of Drake from the video games. As a result, the movie presents a hesitant Drake who tends to live in his brother’s shadow, resulting in a flat and underwhelming version of the well-known action character.

The promise of seeking riches beyond one’s dreams is a familiar movie trope that requires a niche perspective to distinguish it from others. “Uncharted” fails at this task, blending in alongside many other adventure-focused films. As such, the plot is an expected, stale take on the betrayal trope of adventure movies. The film broadcasts seemingly endless cycles of betrayal and expected “surprises” that leave viewers wondering about their significance to the plot.

Although the script falls short, Holland and Wahlberg’s dynamic makes a lasting impression and carries the dialogue of the film. Both characters seem to tap into their mentor-mentee relationship, a dynamic that gives the film much-needed comic relief. Mark Wahlberg’s appearance in the movie adds further depth to Holland’s character, providing vital plot points through his dialogue that Holland subsequently follows. Overall, Wahlberg successfully performs his character when Holland’s appearance becomes stale. In contrast to Holland’s unexciting portrayal of Drake, Wahlberg is able to deliver striking dialogue and saucy banter with Holland that presents him as a believable money-hungry and manipulative treasure seeker. Wahlberg’s compelling portrayal of the selfish explorer that grows to put behind his greedy motives and befriend Drake adds depth to the character of Sully — and provides new insights into the original game character.

Despite disappointments in the film’s dialogue and performances, the visuals through the sets of the film are stunning. Starting the movie in medias res could have been unsuccessful for the film, but it was a surprisingly refreshing way to engage the audience from starting with Holland’s stunt sequences and later tying back to this scene through an exciting full-circle fight sequence. The recurring images, such as a seemingly unimportant vintage red car that ends up hitting Holland out of a plane, work to enhance the details of the set design. Most notably, the film’s climax takes place with two Magellan ships docked in an idyllic grotto that get lifted into the air, with the characters fighting on these moving ships. These impressive scenes of picturesque rock islands turning into a battlefield vitalize the already stunning visual images seen throughout the film.

Though “Uncharted” has a mix of high and low points, most of these were forgettable after heading out of the theater. Most regrettably, the film fails to take advantage of the opportunity to add depth to the plot and characters of the video games — ones that have yet to be seen by fans of the games. Regardless, fans of the original game can be sure to get excited about future films. Featuring a post-credit scene that unsurprisingly alluded to a sequel, it is clear that cinema will see more of the “Uncharted” franchise for years to come.