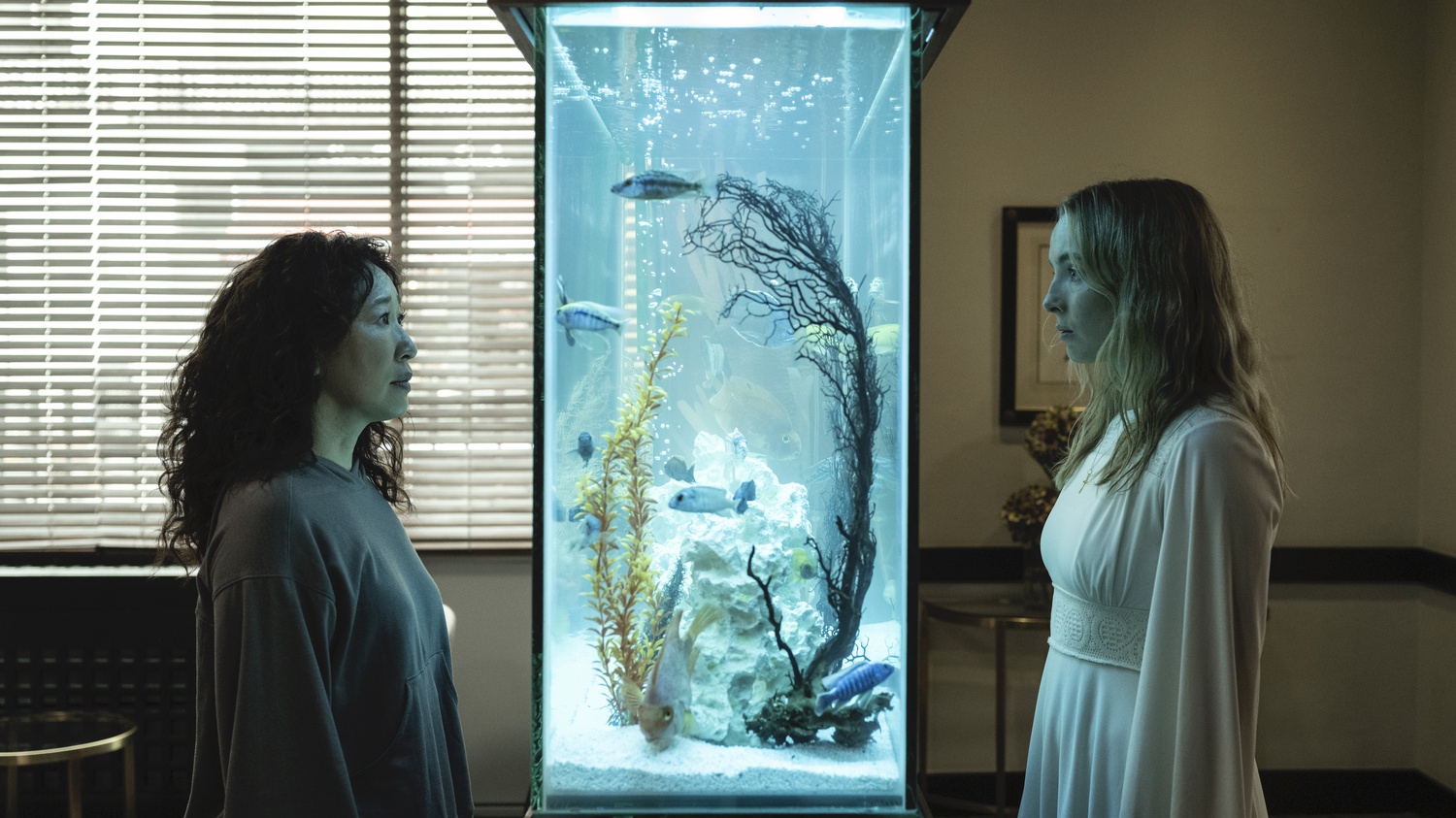 The season four premiere of “Killing Eve” aired on Feb. 27, reuniting loyal fans with psychopath Villanelle (Jodie Comer) and obsessive intelligence agent Eve Polastri (Sandra Oh). The first episode of the final season was defined by a surprising reversal of roles as Eve becomes the season’s newest villain and Villanelle attempts to shed her lethal past and seek salvation in Christ. Though these out-of-character portrayals and other unconvincing moments are initially disappointing, enough of the duo’s familiar, alluring bad habits peek through their good girl/bad girl facades to make the episode interesting — hopefully promising a return to the women’s obsessive dynamic that warrants sticking with the final season.

In an apparent homage to characteristic Villanelle fashion, the episode opens with a woman in a skin-tight motorcycle suit, brandishing a gun and forcing her way into a Russian government building. The only difference? It’s not Villanelle at all — it’s Eve. She confronts Konstantin (Kim Bodnia), who now appears to be a small-town mayor, and proceeds to shoot him in the hand. Not only is Eve’s portrayal out of character and not entirely convincing, it’s overshadowed by the confusion this scene raises. Given no explanation as to how a man that was, as of the season three finale, involved in an all-powerful terrorist organization and almost executed is suddenly a small-town mayor, viewers are left with more questions than answers. Unfortunately, this seems to be a theme throughout the premiere.

Set almost entirely in Russia, episode one is devoid of the many idyllic European landscapes and bustling cities that fill the background of prior seasons. Beyond aesthetic considerations, however, the setting raises some logistical questions. When Villanelle is able to leave her Baptism (yes, the same Villanelle who has spent three seasons killing without a trace of remorse is getting Baptized), pop in to see Eve unannounced, and return to the church all in a matter of hours, viewers are left to wonder where these women are situated geographically and why they are so close. There is a lingering sense of disappointment as well: As the allure of “Killing Eve” lies in the chase, Villanelle showing up at Eve’s hotel with little effort and minimal conflict doesn’t do justice to the intricate game of cat and mouse fans have followed for three seasons.

Eve continues to investigate the Twelve — the top-secret terrorist organization that formerly employed Villanelle — under the guise of working for a private investigation company. While she is joined in this venture with a new co-worker and romantic interest Yusuf (Robert Gilbert), Villanelle seeks salvation in the Church. She takes refuge in the home of a priest and his daughter May (Zindzi Hudson) who seems to be the new object of Villanelle’s desire. At a family dinner with the two, Villanelle sports a tie-dyed “What Would Jesus Do?” T-shirt and a gold cross around her neck while serving loaves of bread and fish. Though Villanelle’s transformation has the potential to be a compelling change of pace, scenes like this one are almost too on the nose.

Because it is in such stark contrast to past seasons, the incongruity of Villanelle’s transformation into a devout Christian eclipses Eve’s own character development throughout the episode. If they weren’t occurring parallel to one another, perhaps the viewer might give more pause to moments when Eve tells Yusuf how good it felt to shoot Konstantin or when, upon Villanelle showing up unannounced and trying to demonstrate she’s changed, Eve slaps her across the face.

While both transformations are unsettling for characters who have historically seemed so set in their ways, the extremes of Villanelle’s new persona are especially unnerving and at times feel like a letdown — who is Villanelle if not evil? Who is Eve if not obsessively tracking down Villanelle? Lucky for us, though, old habits die hard. As Villanelle’s possessive personality and violent tendencies break through the facade she’s created, Eve’s own obsession with the Twelve is rekindled when Carolyn (Fiona Shaw) brings her new evidence. Perhaps these new personalities aren’t as concrete as the writers would like us to believe.

The premiere of “Killing Eve”’s final season asks viewers to refrain from asking questions when plot points aren’t given adequate explanation and to place a certain amount of trust in the show’s writers as its two protagonists undergo significant transformations. While such stark changes and unconvincing moments throughout may put viewers off, seeing Eve and Villanelle fall into old habits is nevertheless promising. Fans of the show should suspend disbelief for maybe a bit longer, if only to see Eve and Villanelle back at it in their obsessive, dramatic, queer game of cat and mouse.