Cordae Concert Review: Cordae Loves His Fans And They Love Him Back 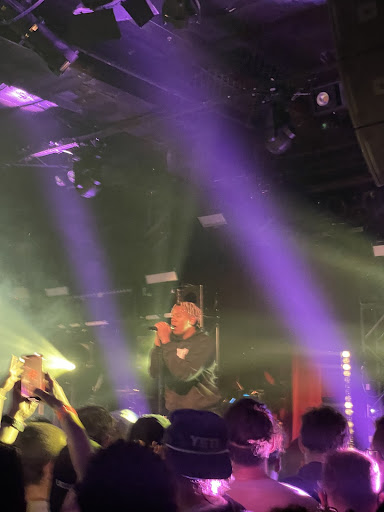 Grammy-nominated Maryland rapper Cordae performs at the House of Blues on his nationwide “From a Birds Eye View” tour. By Courtesy of Derek Yuan
By Derek Yuan, Crimson Staff Writer

On Feb. 17, Grammy-nominated rapper Cordae dropped by Boston for the latest stop on his nationwide “From a Birds Eye View” tour. The show comes almost exactly a month after the release of Maryland-based Cordae’s sophomore album of the same name. In that short amount of time, a small army of Bostonians had already managed to learn all the words to the rapper’s new songs. The concert setlist drew heavily from his new album, as well as 2019’s critically acclaimed “The Lost Boy.”

Opening for Cordae were supporting acts BLK ODYSSY and Justine Skye. After two strong performances from the artists, fans waited eagerly for Cordae’s appearance, chanting his name in anticipation. In a memorable entrance, Cordae proceeded to kick off the set with the opening track from his latest album, “Shiloh’s Intro” from backstage. The song, featuring an a capella verse from Cordae’s younger brother Shiloh recorded through a prison phone, energized fans and set a strong tone for the concert as audiences cheered for Cordae’s appearance. As the intro wrapped, the live band transitioned into the boom bap backing for “Sinister,” whereupon Cordae launched into his explosive opening.

Cordae burst onto the stage wearing huge black sunglasses and a similarly large gray plaid puffer jacket, belying the heat and intensity already permeating the building. His next song, “Super,” showcased his ability to combine intricate lyrics with head-banging pop appeal. Ironically, the first line of the song declares, “Last year, I made seven million / Didn't have to do a single fuckin' show.” But here he is now, doing a national tour, with an even greater potential for growth on his horizon.

But Cordae, ever so introspective, also made sure to return to his humble beginnings, shouting out his day one fans out in the crowd. And with that, he transitioned into “Kung Fu,” an exciting and versatile track that helped first bring him into the limelight back in 2018, which showed off his nimble lyrical acrobatics in the context of the show. And it seems that a number of day one fans were in attendance, because the vast majority of the audience knew the lyrics by heart.

Cordae’s storytelling, whether stump speeches or legitimate accounts, defined the concert as well. Apart from the standard declarations of, “Boston, I fucking love this city,” Cordae regaled the audience with quick stories that would transition into songs. We learned that apparently, Cordae has an ex from Boston that would bother him at the most inconvenient times, for whom he doesn’t have time “Today.” Or, reflecting on the concert and its energy, Cordae realized that the experience was a sort of therapy for him, which made him think back to when he was “Broke As Fuck.”

“Broke As Fuck,” “Today,” and the aforementioned “Super,” were all certified bangers that had the room shaking. That is not to say, however, that the concert was without its melodic and slow jams. Performances of “Want From Me,” “Thousand Words,” and “Bad Idea” showed off Cordae’s strong singing abilities with only a slight autotune assist. For these songs, Cordae chose to stay planted at the microphone stand, swaying slightly with the rhythm of the music.

Cordae songs, unlike the repetitive hooks embraced by many of his contemporaries, are no simple matter. He’s known for elaborate flows and multisyllabic rhyme schemes. That night, despite the technically demanding verses, or heat and energy of the crowd, Cordae’s rapping continued to be clear and precise. And, despite the deafening bass, one could understand every word he spoke.

But perhaps even more amazingly, the audience, too, kept up with Cordae’s rapping. In an hour long setlist, fans demonstrated their true dedication towards Cordae’s music, as they repeated verses with laser precision, such as; “Despite it all, we remainin' the same, I'm just changin' the game / Heart pure, never tainted with fame.” Not a single song went without distinctly audible audience accompaniment.

After the last song of his set, fans began chanting Cordae’s name, to which he responded that he loved them. And it was clear that this love went both ways. Cordae let the crowd know that they were not his “friends” or “fans,” — they were “family.” Cordae explained that his fans could be “watching Netflix,” “jerking off,” or having carnal knowledge with a “significant other,” but instead they chose to be here. And for that, he loves them.

Much of Cordae’s appeal has been his ability to meld the lyrical and rhyme-focused sensibilities of hip-hop’s past with today’s catchy and accessible trap sounds. This concert proves his approach has been truly successful.

The rest of Cordae’s tour stops can be found here.