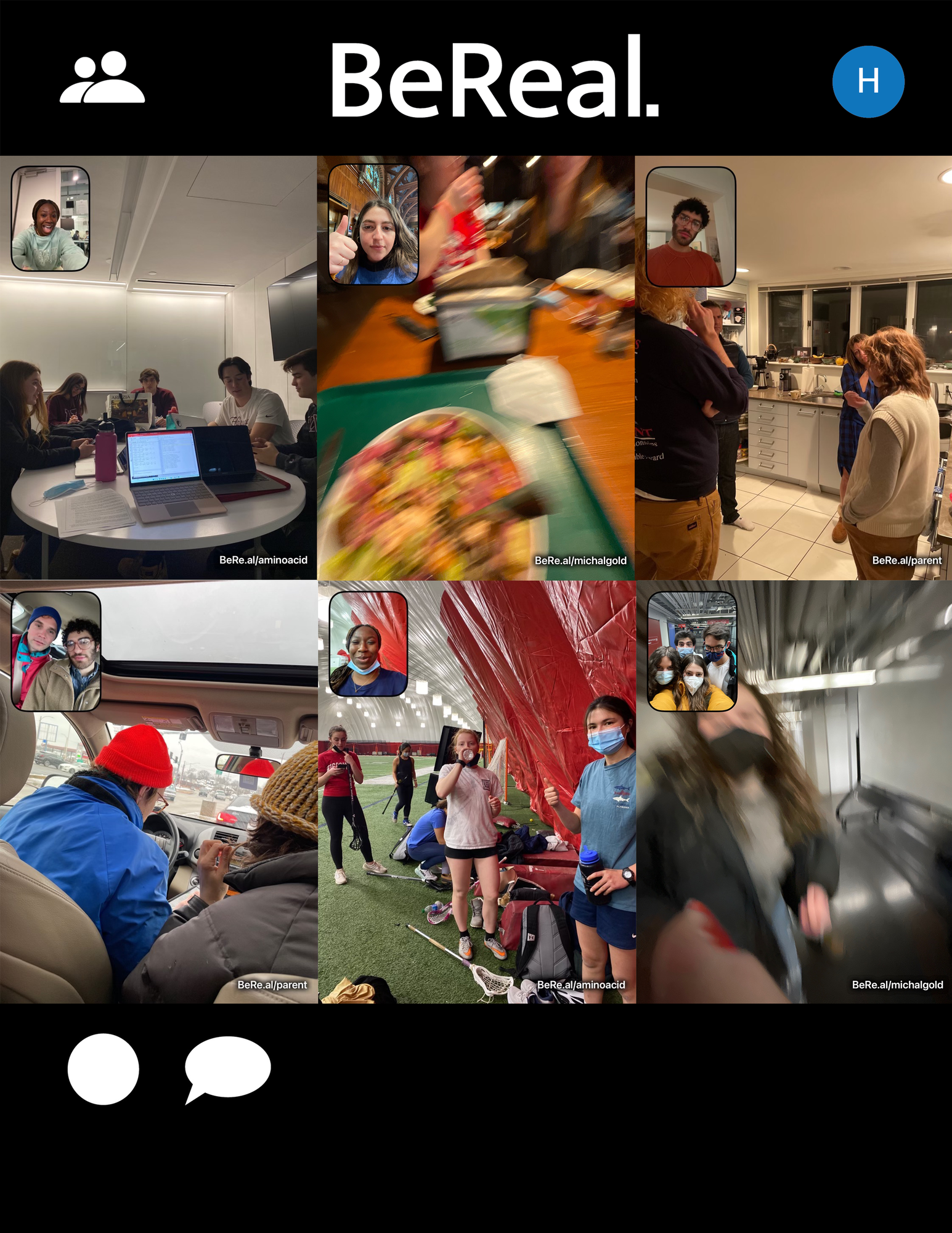 How Real is BeReal?

The first time one of my friends tried to sell me on BeReal, I balked. A mandatory photo of my face at an unpredictable time each day?
By Tamar Sarig

The first time one of my friends tried to sell me on BeReal, I balked. A mandatory photo of my face at an unpredictable time each day? My first thought: I would have to do my makeup every morning.

Of course, that unscripted quality —the loss of control over how your friends see you, and when — is the whole point of BeReal, an app that bills itself as a way to “discover who your friends really are in their daily life.” Launched in 2020, BeReal first gained steam in Europe, then exploded across American college campuses this spring.

The idea is to strip away the curation, planning, and artificiality of other content-sharing apps like Instagram. Once a day, at a random time, the BeReal notification flashes on users’ screens, warning them that they have two minutes to post their daily photo. (You can choose to post late, but the app shows everyone else exactly how late you posted.) You can’t see your friends’ photos until you post yours, and once you’ve shared, you can comment and react to everyone else’s. The feed stays up until the next day’s BeReal alert, at which point the old photos disappear —a nod to Snapchat’s ephemeral stories. 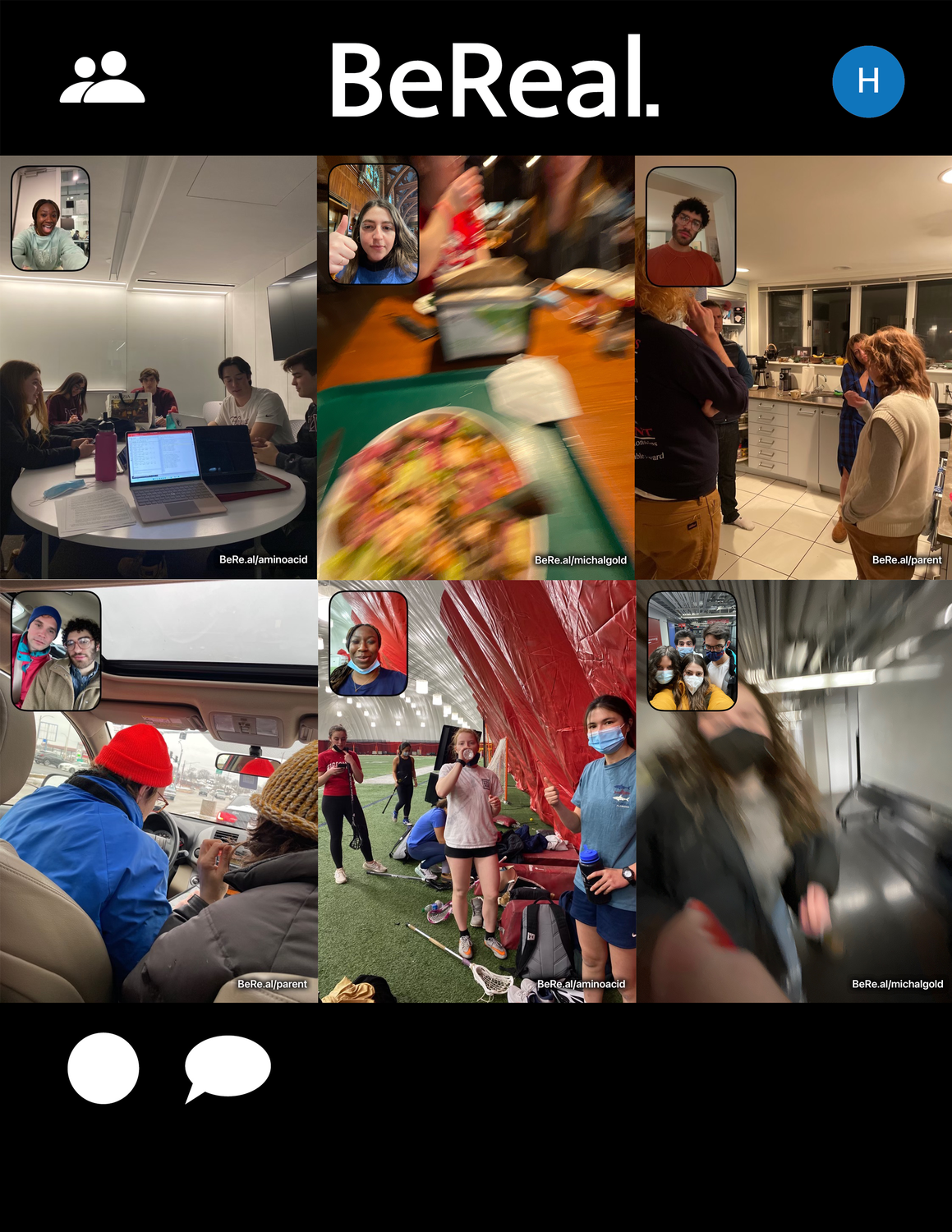 A collage of BeReal posts. By Samantha Simpson

BeReal self-consciously styles itself as a sort of anti-social media. Its App Store description warns, “BeReal is life, Real life, and this life is without filters.” Andrea Mach di Palmstein, BeReal’s head of growth, described the app’s selling points in a LinkedIn post as “no social pressure, no toxicity and no social comparison on social media.” Some of the app’s descriptions explicitly call out other platforms, like TikTok and Instagram, as the antithesis of what BeReal wants to do.

By the time I heard about BeReal, my screen time was already embarrassingly high. Adding another social media app to my repertoire of distractions seemed unwise. Fundamentally, I didn’t like the idea of being caught off-guard — of feeling social pressure to show myself at my worst, if necessary.

For Karen Chan ’22, though, that’s exactly what makes BeReal so much more enjoyable than other types of social media.

“I think a lot of times, you’re used to interacting with your friends in very well-chosen and specifically chosen instances and times of the day,” she says. “And unless they’re your roommate, or a really, really close friend, you don’t really get to see them beyond the public instances when you choose to hang out. And I think the fun thing about BeReal is that you get to see a side of their lives that you don’t normally see.”

Amina T. Salahou ’25 agrees, to an extent, that BeReal is more genuine than other apps.

“When I post on Instagram, it’s a process,” she says. By contrast, BeReal leaves no time to think about how you look or where you’re posing. Still, Salahou says the app is far from an unfiltered window into real life.

“Especially just with Gen Z and the way people are, there’s kind of no way for things to not be curated,” she says. She cites another feature where you can see the number of times a post was retaken. “I remember once me and my friends were on the app, and we saw some guy re-took a picture of his feet, like, seven times.” She’s planning to delete the app soon, she says; she doesn’t feel the need to see her friends out on a jog when she’s still lying in bed.

For the sake of honest journalism, when I was assigned to write this article, I decided to download the app and give it a fair shot, at least for a week.

Things started off well enough: On day two, BeReal blessedly caught me in the middle of an outing to the Boston Symphony Orchestra. I’m not the kind of person who goes to orchestra performances, but my friend had offered me a free ticket, so I got to post a photo of us in our regal outfits at intermission.

Of course, that artificial scarcity is a double-edged sword: if capturing exciting moments spent with friends makes us feel happy and grateful, then how does capturing all the mundane moments make us feel?

Emily Weinstein, Research Director at the Harvard Graduate School of Education’s Project Zero, has spent much of her professional career asking similar questions about young adults and their technology use. She first heard about BeReal in early February, during a panel discussion held for her Ed School class “Digital Dilemmas.” Weinstein emphasizes that the effects of BeReal, like every other social media platform she studies, are nuanced and personally specific, but she points out that the nature of the app can make users increasingly self-conscious about their daily lives.

“Another thing that came up in the early conversations was this kind of awareness of, ‘how many times I am getting the push to post that I’m alone?’” Weinstein says. “And does that elevate your own sense of when you’re with others and when you’re alone? And how does that make you feel?”

On the fifth day of my experiment, I was already late when I got the BeReal notification. I’d spent most of the past few hours alternatively panicking about an upcoming job interview and crying because I’m scared to be unemployed. My room was its usual level of messy, and I was attempting to work from my bed, which I hadn’t made in days. Both the front-facing and back-facing camera views felt a little too humiliating. I decided to wait until I’d at least gotten out of bed.

For Michal Goldstein ’25, a Crimson News and Magazine editor, BeReal makes her feel the opposite of alone.

“I think any social media that tries to sell itself as authentic and not a way to outwardly show your life is falsely advertising what it is,” Goldstein says. But she thinks BeReal’s authenticity is beside the point.

She and her friends started using the app as a way to stay connected over winter break; rather than call or text each other constantly, they could easily share little spontaneous snippets of each other’s lives every day.

For Weinstein, the uncurated aspect of BeReal is also not necessarily the app’s purpose. “I wonder if maybe it makes sense to flip the question, so that instead of judging if others are authentic, we focus more on questions about how we feel, and specifically questions that might signal whether we're being authentic in ways that matter for ourselves,” she says. “So I’m asking questions like, ‘How do I feel when I share on this app? What am I getting out of this?’”

After about a week on BeReal, I gave up on feeling bad about the unglamorous parts of my life. For three days in a row, I posted a picture of myself alone in my room, on my computer, doing homework. I posted several truly hideous back-facing selfies, the kind of photo I would rather die than put on Instagram. It helped that I only have 17 friends on the app — a common theme among everyone I spoke to is that BeReal doesn’t encourage building a vast, performative network of followers like other apps do. But I still couldn’t stop myself from retaking my pictures five times before they finally felt acceptable enough to show to my ten closest friends.

While the BeReals we post are temporary to everyone else, users can scroll back through their own archive, flipping through the random moments like a photo album. When I look back at my (now going on a) month’s worth of memories, I see what Glist meant. I’ve assembled a little mirror image of my life, more or less accurate despite the brief and random moments I captured, 90 percent of them intensely mundane: me in my common room with my friends, me working in my room, me on the shuttle to class. The remaining 10 percent (restaurants and parties and spring break by the pool) feel the way they should — special, unusual, precious, but not inherently better or worse than the millions of boring moments, like the 3pm sun beaming in through the windows on an ordinary Tuesday in my ordinary dorm with my beloved, ordinary friends.