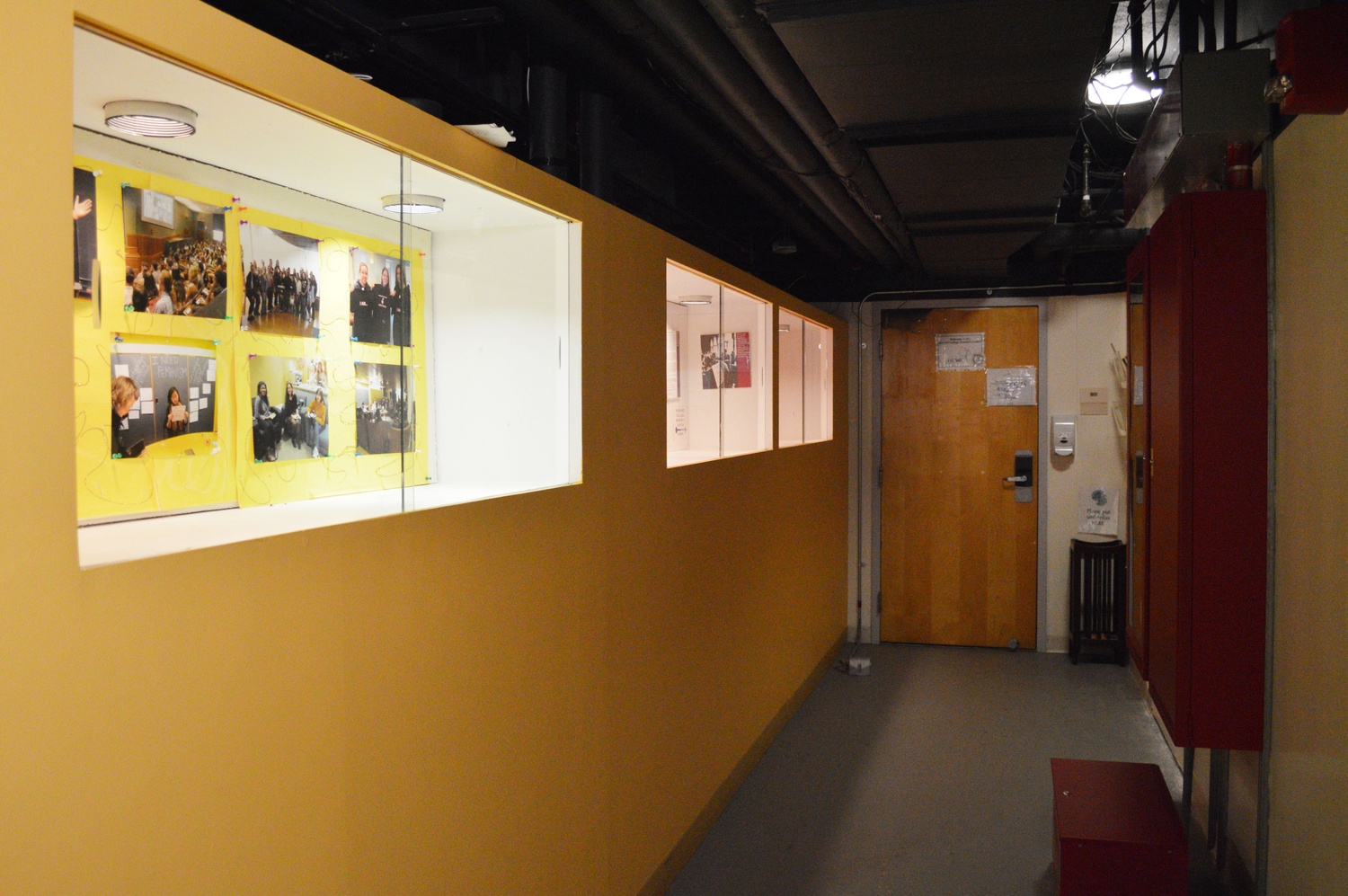 A wall displaying photos from various Women's Center events, pictured in 2015, leads the way to the Women's Center door at the basement of Canaday B. By Y. Kit Wu
By Darley A.C. Boit, Crimson Staff Writer

The Harvard College Women’s Center kicked off its 16th annual Women’s Week on Tuesday with a presentation entitled “Female Solo Travel” in the first of seven events aimed at recognizing women’s achievements and struggles.

The launch of the week-long series — which the Women's Center has run since 2007 — coincided with the start of Women’s History Month. The theme of this year’s Women’s Week is “On the Horizon,” in recognition of women’s resilience in the face of difficulties and their contributions in various fields.

“When you do see dialogue about women and gender issues, it's often almost framed in an infantilizing way, just reducing women to being victims,” Naworski said. “Yes, womanhood is hard, but also women are amazing, and we should empower women.”

“Our theme of ‘On the Horizon’ is really reflecting both the struggles and the power of women combined,” she added.

Naworski and Ananda M. Birungi ’24, the current design and publicity chair for Women’s Week, have worked since August to organize this iteration of Women’s Week. Other events include “Fetishes, Fantasies, and Fever,” a discussion focusing on the fetishization of Asian women, and “Yoga on the Horizon,” a candle-lit yoga class.

“Women are not one hundred percent safe in any situation in the world,” Van der Sluijs said. “It doesn’t mean you should tell us not to travel. It means we need a bigger culture shift.”

Birungi said the week’s events aim to emphasize the importance of balance in feminist work.

“We should uplift each other, but also take time for ourselves,” Naworski said. “Really balancing how we view our own gender and both appreciating women but recognizing our struggles — I hope that [students] get that holistic picture from these events.”

Birungi said the week’s programming covers a wide range of perspectives and issues.

“Especially this year, you'll notice if you've looked at our events schedule, we have clubs that aren't just about gender,” Birungi said. “Facilitating conversations on gender across clubs that you wouldn't normally expect to necessarily talk about [gender] is a really important thing that we're very happy to do.”

Birungi and Naworski encouraged everyone to attend the week’s events, regardless of identity, and said the programming is meant to engage all students.

“The purpose of women's week is to have a dialogue about gender struggles, especially at Harvard. Everybody should come to all of the events if they can,” Naworski said. “Getting people who normally don't talk about gender to talk about it is one of the biggest accomplishments we could have this week.”

Women’s Week will close with the Women in Foreign Policy Conference, a collaboration between the Women’s Center and the Harvard Undergraduate Foreign Policy Initiative. The conference brings together students from Boston-area universities and includes keynote speakers, mentorship opportunities, and workshops for students of all identities.

“It's not just about this one week — the Women’s Center is constantly doing work to support women and femme-identifying students on campus throughout the years,” Birungi said. “It's also a reminder to know that this work is continuous and it's not just a one-week thing.”