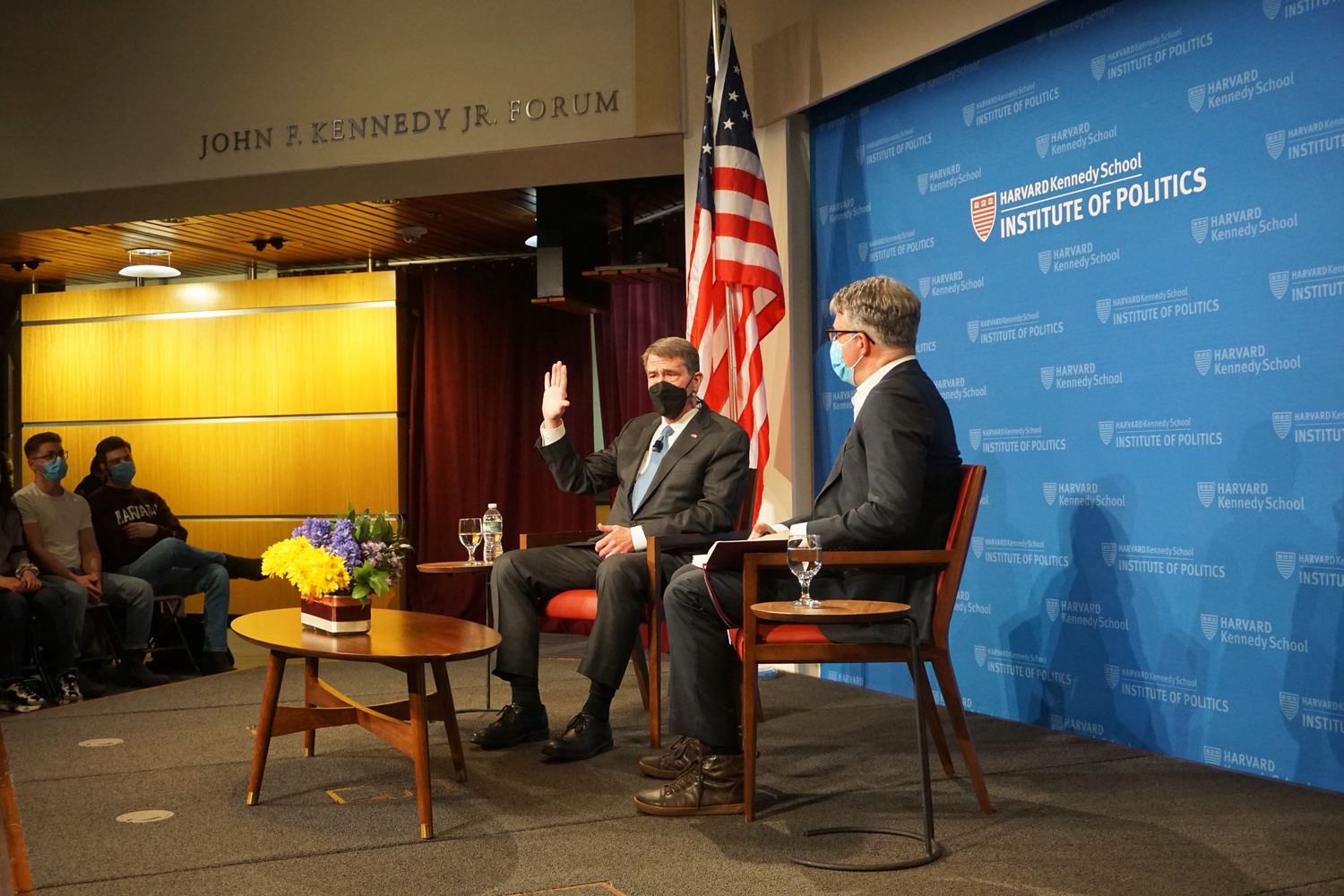 Former U.S. Secretary of Defense Ashton B. Carter discussed the historical events leading up to Russia’s invasion of Ukraine and its global consequences at a Harvard Institute of Politics forum on Wednesday evening.

Carter was joined by his former chief of staff, Eric B. Rosenbach — co-director of the Harvard Kennedy School’s Belfer Center — at the event, which was held less than a week after Russian President Vladimir Putin launched his invasion of Ukraine.

Wednesday’s event was the most-attended IOP forum since the start of the coronavirus pandemic, as loosening safety restrictions allowed the IOP to raise its capacity limit “for the first time since resuming in-person events in September,” according to IOP spokesperson Lauren L. Miller.

The event began with Ukrainian student Nika O. Rudenko ’24 sharing a personal account of the war in Ukraine and its impact on her.

“I’m originally from Donetsk, Ukraine, which means that in 2014 we were forced to flee my hometown,” she said. “At that moment, my life changed forever, and five days ago, my life changed again.”

Rudenko also called on Harvard to disclose any potential financial connections to Russia.

“We believe that the policymakers have the power and moral obligation to make Harvard disclose its investments or provide proof that there are no companies or funds affiliated with Russia,” she said.

Harvard spokesperson Jason A. Newton previously declined to comment on whether the school has financial ties to Russian companies.

Carter said he and other colleagues who were in the Pentagon in the 1990s had opposed rapid NATO expansion because they were afraid of creating a situation in which Russia felt “aggrieved.”

“We wanted to slow the ball,” Carter said. “The phrase we used at the time was — we don’t want to create a ‘Weimar Russia.’”

Unlike NATO’s hasty expansion, Carter said the West was too slow to understand the danger posed by Russia’s longtime president.

“I think that the Western family of nations came too late to a realization of what we had in Vladimir Putin,” he said.

Carter also said he does not believe the threat of sanctions would have prevented Putin from invading Ukraine.

“I don’t think that Vladimir Putin was going to be deterred by that,” he said. “I think the purpose of sanctions is punitive, vengeance, and deterrence of something way down the road.”

Carter, however, also said he does not support the implementation of a no-fly zone over Ukraine, something Ukrainian President Volodymyr Zelenskiy has repeatedly called on the United States to do.

“A no-fly zone implemented by NATO is an act of engaged military engagement with Russia,” he said. “This situation would have been very different if Ukraine had been a NATO ally, but for right now, it is not our policy.”

“I personally don't favor doing that — that we enter the war on Ukraine’s side,” he added. “That’s a very, very dangerous situation. That means war between the United States and Russia.”

In an interview after the forum, Rosenbach said he agrees with Carter that the U.S. should not implement a no-fly zone.

“We do not want something to escalate into an outright war with Russia, in particular given the threat of a nuclear exchange,” he said.

Rosenbach also said he believes Western decision-makers understand that the implications of the war between Russia and Ukraine extend beyond the borders of either country.

“I think most of the senior leaders and thoughtful people in the West realize that this is about more than just Ukraine,” he said. “This is about democracy, it’s about principles, and it’s about values of human rights and international law.”