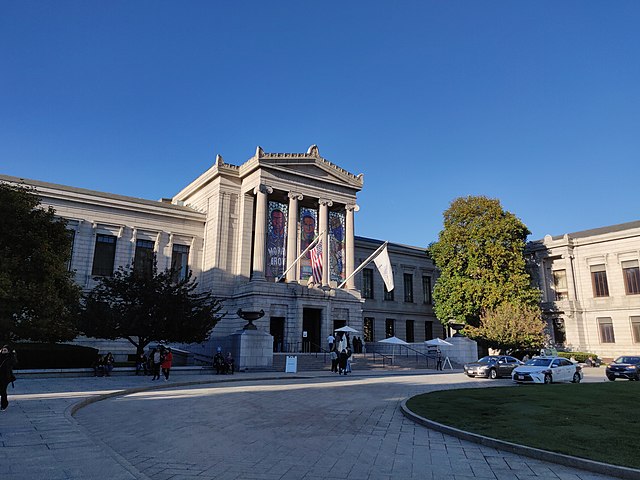 The main entrance of the Museum of Fine Arts, Boston. By Courtesy of Sdkb / Wikimedia Commons
By Ebubechi J. Nwaubani, Contributing Writer

With the resurgence of nostalgic trends driven by Gen Z photographers and the endless re-emergence of styles from the 20th century, the “Real Photo Postcards: Pictures from a Changing Nation” exhibit at the Museum of Fine Arts in Boston brings some class to the act of reminiscing.

Born from the MFA’s Leonard A. Lauder Postcard Archive and curated by Lynda Klich and Benjamin Weiss, the exhibit highlights the youth and playfulness that defined photography following the creation of the postcard camera, as well as the expansion of news coverage and public fascination in disasters. Panels of postcards show snapshots of hot air balloons and grounded biplane aircraft. One image depicted people swimming in a lake with a figure in mid-dive; the bottom left corner read “COME IN THE WATERS FINE” in perky handwriting.

Shots like these transport visitors into a time they never knew: the early 1900s, awash in brown and gray tones with scenes fit for a Charlie Chaplin film. The ease with which photos could be produced seemed to birth a hedonistic photography style where pictures were taken “just because.” A small child sat with pumpkins in one card, a picnic in another, and a landscape in a third. Photography no longer had to be so serious but a pastime that many could enjoy.

The images, spanning from casual to orchestrated and formal, were oddly similar to what we might see today on Instagram and, as a result, felt intimate. Each photo had a different personality, each portrait representing a different life.

One display was titled “When you look at this, think of me” and was filled with rows upon rows of people posing for a photograph that seemed to box up their personality nicely and tie it with a bow. Some individuals were in lumberjack uniforms, one was seated with a phonograph, and yet another was dressed in a clown costume. Upon taking in the display, one is likely to be overcome with the recognition of the multitude of experiences that are had outside of their own. Despite or perhaps because of this grand understanding, the images still manage to pull viewers closer to each story that is encompassed in the miniature postcard frame.

Veering into a more formal use of postcard cameras, the exhibit features a crescent moon backdrop for visitors to take pictures against — a commonly used backdrop in the early 1920s. While the anthropomorphized crescent moon and starry night background may be an interesting choice for professional pictures today, it emphasizes the playfulness and eccentricity that could be embraced when the risk of not getting the perfect shot with limited film was no longer such a risk.

Families in the 20th century posed in front of paper crescent moons while some children lay on top of it, all of whom were in what seemed to be their finest gowns and suits. It’s almost comical to look at in retrospect, but it’s a nice reminder of the creativity drawn from innovation and new experiences. A reminder that one can pose in their finest clothes in front of a paper moon with a dramatized face on it “just because.” A reminder that, at times, the rules of what should and shouldn’t be done fall away.

Despite the frivolous nature of domestic postcard camera use during this time period, it also enabled darker topics to enter the public eye more consistently. Train car wrecks, tornadoes, and fire rescues in postcard format that eventually circulated through news media were also on display at the exhibit. Media coverage of such tragedies in the 21st century has become a given, yet there is still surprise and fear when those images come up on the news. The feeling is no different when viewing the exhibit’s postcards. From a 20th century perspective, shots like these capture not only the disasters at hand but the growing ubiquity of photography during this time.

“Pictures of a Changing Nation” is the epitome of taking a step back, maybe not always to the ‘good ole’ days,’ but never too far from it. The images span what seems to be everything that life was during the early 1900s — the best parts and some of the worst. The exhibit doesn’t fail to submerge the audience in the ongoings of the photographs, and in doing so, allows the shift in the limits of photography and what that meant for society to be thoroughly understood.