Artist Profile: Don Braden and The Universe at Work 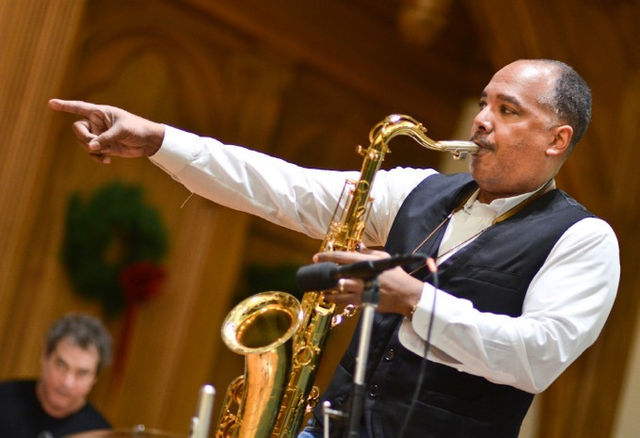 Don Braden performing with the Big Fun'k in New Jersey in 2011. By Courtesy of Adam Zyto
By Ebubechi J. Nwaubani, Contributing Writer

In early December last year, composer, world-class saxophonist, and jazz musician Don Braden ‘85 directed The Harvard Jazz Combo Initiative’s Jazz & Java Cafe performance in Leverett House. Unbeknownst to many in the audience, the performance occurring that night was the culmination of over 40 years of “the universe at work,” in the words of Braden himself.

Many of the core experiences that Braden relayed during a conversation with The Crimson led him right back to where he began at Harvard: jazz. It all started in the ’70s in his hometown of Louisville, Kentucky.

“I remember how hot it was, it was the summer, my feet were burning through my shoes, I still remember that feeling. I was 15 years old and my feet were so hot that I almost couldn’t stand on the stage,” Braden said.

Born in Cincinnati, Ohio but raised in Louisville, Kentucky, Braden grew up surrounded by the ’60s and ’70s music of his parents and Black neighborhood. Being involved in music from a young age as well as having the opportunity to play in a variety of bands all added to the momentum that led him into a life-long career in jazz.

After playing sunny stages at The Belvedere in Louisville and discovering a proclivity for tenor saxophone in his school band, Braden was prompted to apply to Harvard University by a school friend, Drew Chuppe. So, he did — and he got in.

“My freshman roommate was Leon Gruenbaum who was, actually, quite an excellent jazz pianist. So from the get-go, we were playing together and used to play all kinds of things around Harvard as a duo. Don & Leon. The universe put us together and to this day we have a fruitful relationship,” said Braden.

“My sophomore year, Leon and I were playing somewhere and this kid comes in, Jill Suttenberg,” Braden continued.

Jill Suttenberg ‘87 was all set to go to Yale but happened to be visiting Harvard just to make sure she covered all of her options. It was on this visit that she saw the Don & Leon tag-team playing on campus and was introduced to Harvard’s jazz scene and, most importantly, band director Thomas G. Everett.

“Getting into Harvard was definitely the perfect thing for my music, and the reason why is because — well it’s two reasons. Harvard, in Boston, had a healthy jazz scene at the time, and it’s still pretty good. At the time, Tom Everett, who was the director of bands when I was there, was a big jazz guy. He brought all kinds of jazz luminaries into Harvard on a regular basis,” Brady said.

The Crimson soon came to find out that Suttenberg’s feelings toward music at Harvard were equally as amicable. She ended up enrolling in Harvard instead of Yale. The stars aligned such that Braden would make another friendship his sophomore year that would help propel his music career and opportunities.

“In my sophomore year, a guy came in, alto player, Sasha Lewis. Sasha Lewis, as it turns out, was the son of the great John Lewis, the pianist from the Modern Jazz Quartet. His son came to Harvard. So we became great friends. [Sasha] was the one who took me on my early trips to New York and I stayed with John Lewis in his house. We used to just talk about jazz and music and life and it was great. John Lewis actually found me my first apartment in New York when I took my year off from Harvard, which turned into 40,” Braden said.

Today, Braden performs regularly in New York City at a handful of venues but travels extensively for music gigs. He has ventured as far as Japan and even the Netherlands to perform with fellow New York City musicians and teach music. Since leaving Harvard to further pursue a music career, Braden has formed two main bands: Big Fun’k and the Don Braden Quartet.

“So all the incredible gigs and things that happened since then all were because of John Lewis basically finding me a good place to live and helping me out. Sasha and I, that was a Harvard connection. He’s class of ‘86 and I’m class of ‘85 and then class of ‘87 is Jill,” Braden said.

“So fast forward to about five years ago, [Suttenberg] gets married, she gets her masters and marries [David Matthew Altshuler] and he gets a doctorate and they’re a power couple and they build a whole bunch of money and they give a chunk of money to Harvard because she was so inspired by her time at Harvard, particularly by Tom Everett. She gave money and created something called the [Thomas] G. Everett Jazz Innovation Fund and this is 30 years later, just 5 years ago,” Braden said.

In the meantime, band director Tom Everett called Braden to inform him that he was retiring and wanted to know if Braden could direct the band in the interim. Braden, of course, agreed and ran the Harvard Jazz Band for three years before the current director, Yosvany Terry, was hired. It was Terry who eventually called Braden with the suggestion that would bring his jazz life at Harvard full circle. Braden said, “Yosvany called me and said ‘Connect with Jill for the combo program.’”

About three years ago, after that phone call, Braden sat down for a dinner with Suttenberg, who presented Braden with the concept of starting up a combo initiative using the Innovation Fund.

Braden said, “We had a big band at Harvard but there is a lot of people who can’t fit in the big band because of the configuration. You can’t put a lot of bodies in it. But if you run a combo program you can take everybody and just figure out how to get them all together. [Suttenberg] said, ‘If you do this, this fund will pay for it.’ So we did it. So what I did three nights ago was the final concert for this Jazz Combo Initiative which came out of this fund that she paid for from hearing me and the students.”

Braden emphasized the inclusivity and openness of the combo initiative, the main goal of which is to develop the talents of Harvard undergraduate students interested in jazz at all musical levels. In both the fall and spring semester performances, the students are given opportunities to showcase their refined talents in an atmosphere that would have otherwise not been available to them due to the inflexibility of other musical groups on campus.

With the Harvard Jazz Combo Initiative having just finished their routine fall semester performance and preparing for their spring performance on April 19, Braden said, “Coming full circle now to this, or coming — whatever the path, it’s not circular — kinda this crazy path to last night where the kids get to present their concert. There are so many intertwining stories with that and it’s just super cool. I’m really glad to be at Harvard, number one, and really gratified to see all the connections that have grown from those seeds of those undergraduate years and ultimately share it with the students in a very productive and inspiring way.”

So, if Drew never told Don to apply to Harvard, Don & Leon would have never convinced Jill to come to Harvard, play in the band under Tom Everett, and create the Thomas C. Everett Innovation Fund that funds the Jazz Combo Initiative for which Braden just finished directing a performance at Harvard 40 or so years later. As Braden said, “Here is the universe at work.”