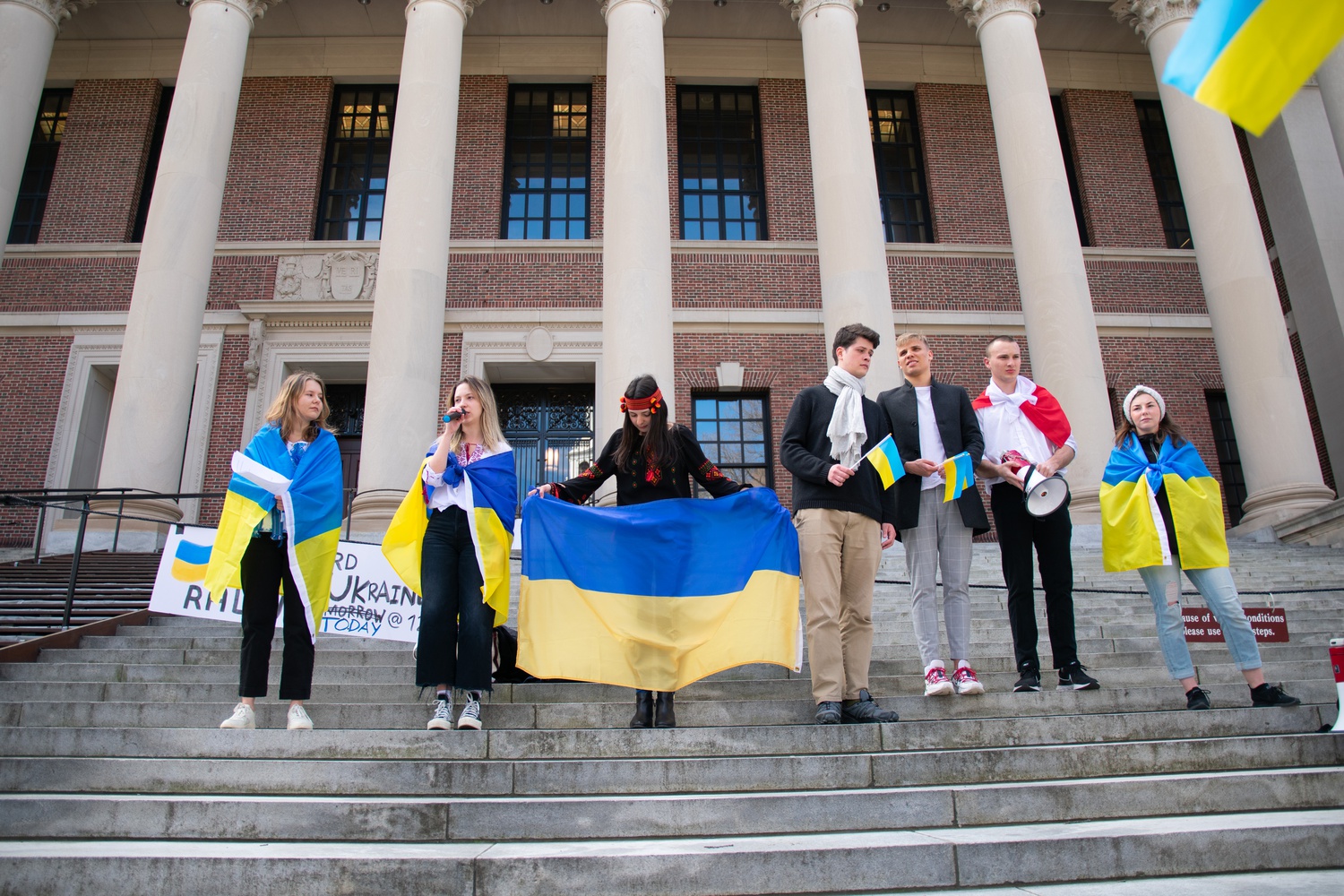 One month after Russia launched its invasion of Ukraine, more than one hundred demonstrators rallied in Harvard Yard on Saturday in support of Harvard students and scholars impacted by the war.

Harvard students, parents, faculty members, and other supporters attended the protest, the second major rally on campus since the war began. Speakers took turns denouncing Russian President Vladimir Putin — whose invasion of Ukraine has left more than 1,100 civilians dead — and calling for the University to do more to help affected Harvard affiliates.

University President Lawrence S. Bacow condemned the invasion in a Feb. 28 event hosted by the Davis Center for Russian and Eurasian Studies and the Ukrainian Research Institute.

“Harvard will continue to support in whatever ways we can members of our community who face grave uncertainty,” Bacow said. “We will continue to share knowledge of Ukraine and advance understanding of its culture, history, and language.” 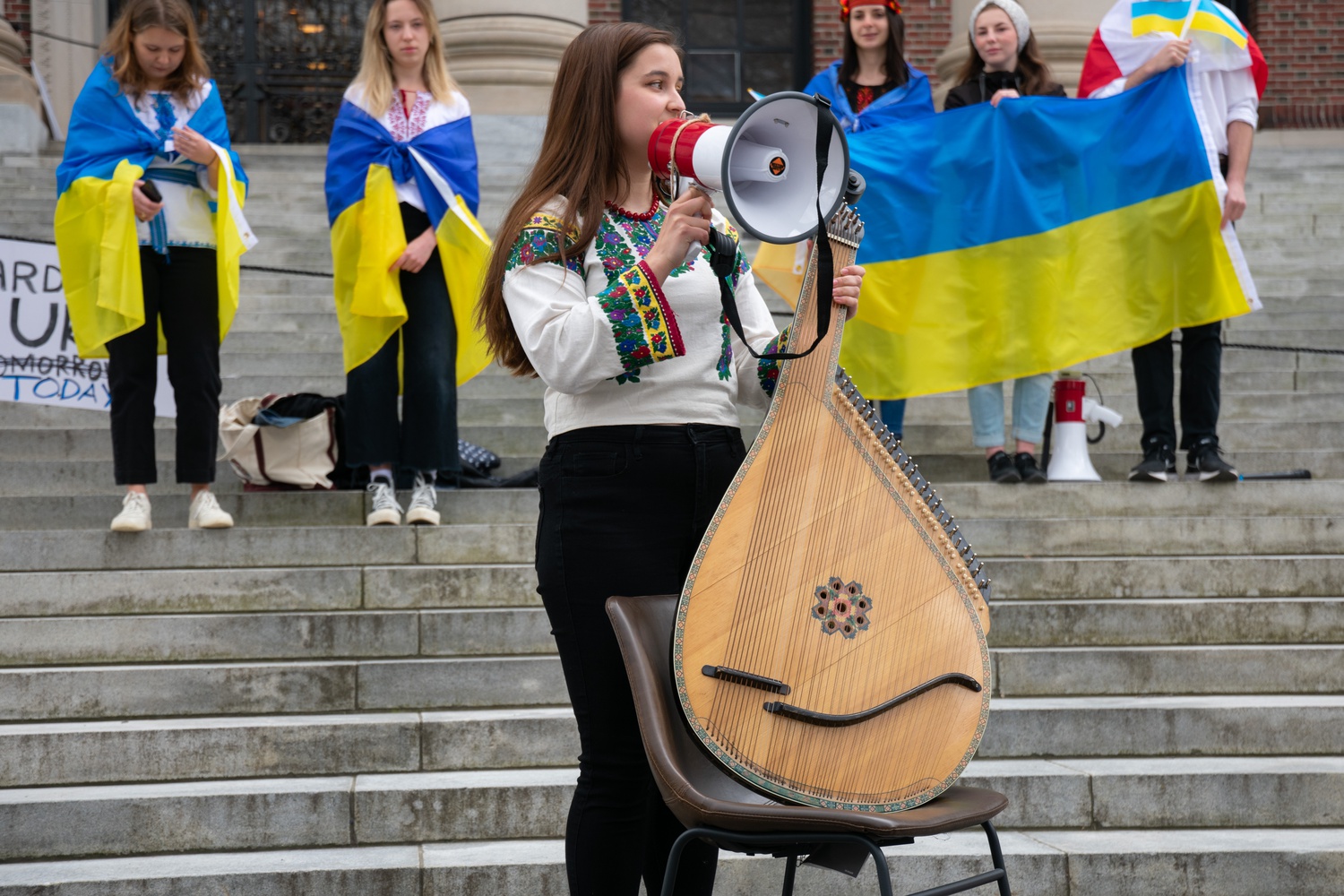 Taisa Kulyk '22 played the bandura at the Harvard for Ukraine rally on Saturday. By Julian J. Giordano

Andrew Berry, a lecturer on organismic and evolutionary biology who attended the rally, said he was concerned about student well-being.

“If Ukrainian students, or affected students, are trying to get appointments with University mental health [services], for obvious reasons, and they're having to wait and wait and wait — that's crazy, and it's such an easy thing to change,” he said in an interview. 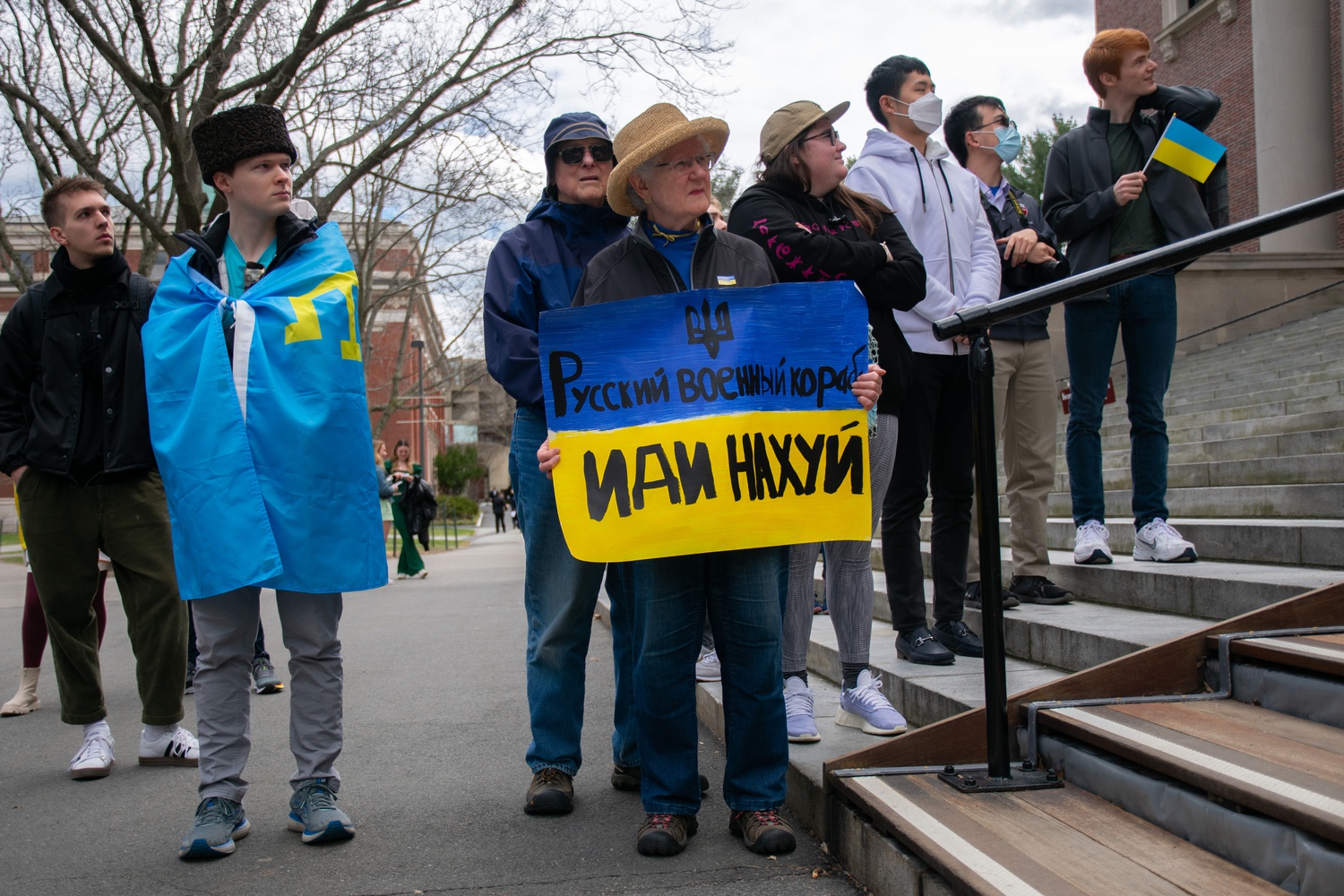 Jane Lytvynenko, a Ukrainian research fellow at the Shorenstein Center, said she has family displaced by the war and friends who are still in danger.

Taisa Kulyk ’22 called on the U.S. to supply Ukraine with more anti-aircraft weapons and drones.

“The world cannot just bear witness to terrorism on this scale and choose not to stop it,” she said. “It has been a month. Bombs can be stopped. Airplanes can be stopped.”

But not everyone at the rally supported sending more weapons to Ukraine.

Michael A. Miccioli ’22 silently held two signs behind the speakers that read “Abolish NATO” and “No Weapons, No Sanctions, No No-Fly Zone, Negotiate!” 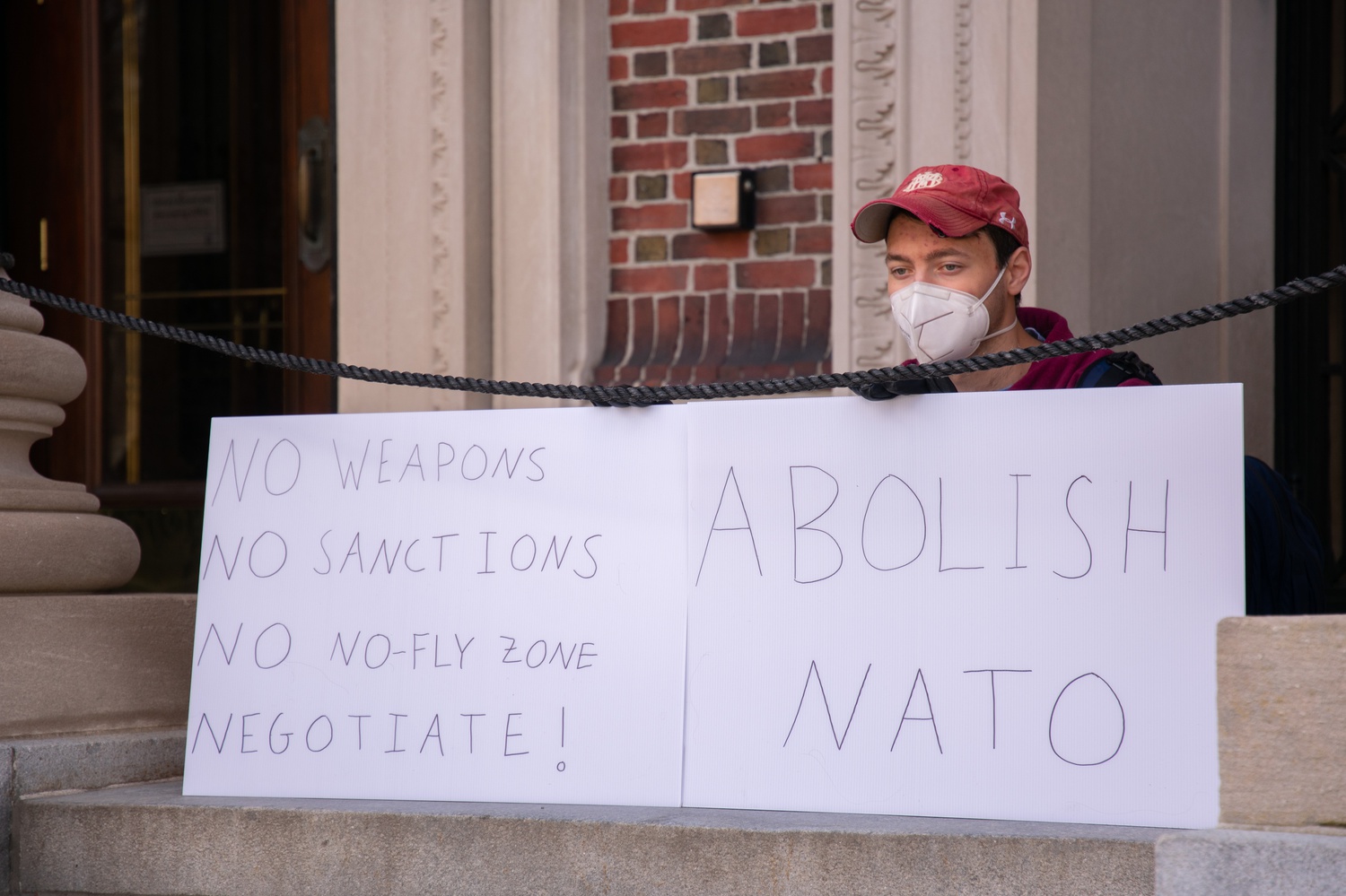 Michael A. Miccioli '22 displayed signs at the rally calling for no sanctions and the abolition of NATO. By Julian J. Giordano

In an interview during the rally, Miccioli refused to categorize his action as a counter-protest, noting he supports several of the organizers’ humanitarian demands.

“I support letting in as many Ukrainian refugees as would like to come, as well as supporting refugees from anywhere across the world,” he said.

Miccioli said he doesn’t support a no-fly zone because it would result in “conventional warfare with another nuclear armed power” which might lead to “World War III and potentially a nuclear holocaust.”

“A no-fly zone — which we're seeing Zelenskyy call for, which we’re seeing certain people in Congress call for — is just completely insane to me,” he added.

Four of the rally’s attendees blocked Miccioli’s signs by sitting in front of them, drawing a loud round of applause. Afterward, another supporter of the rally ripped the signs out of Miccioli’s hands and threw them on the ground. 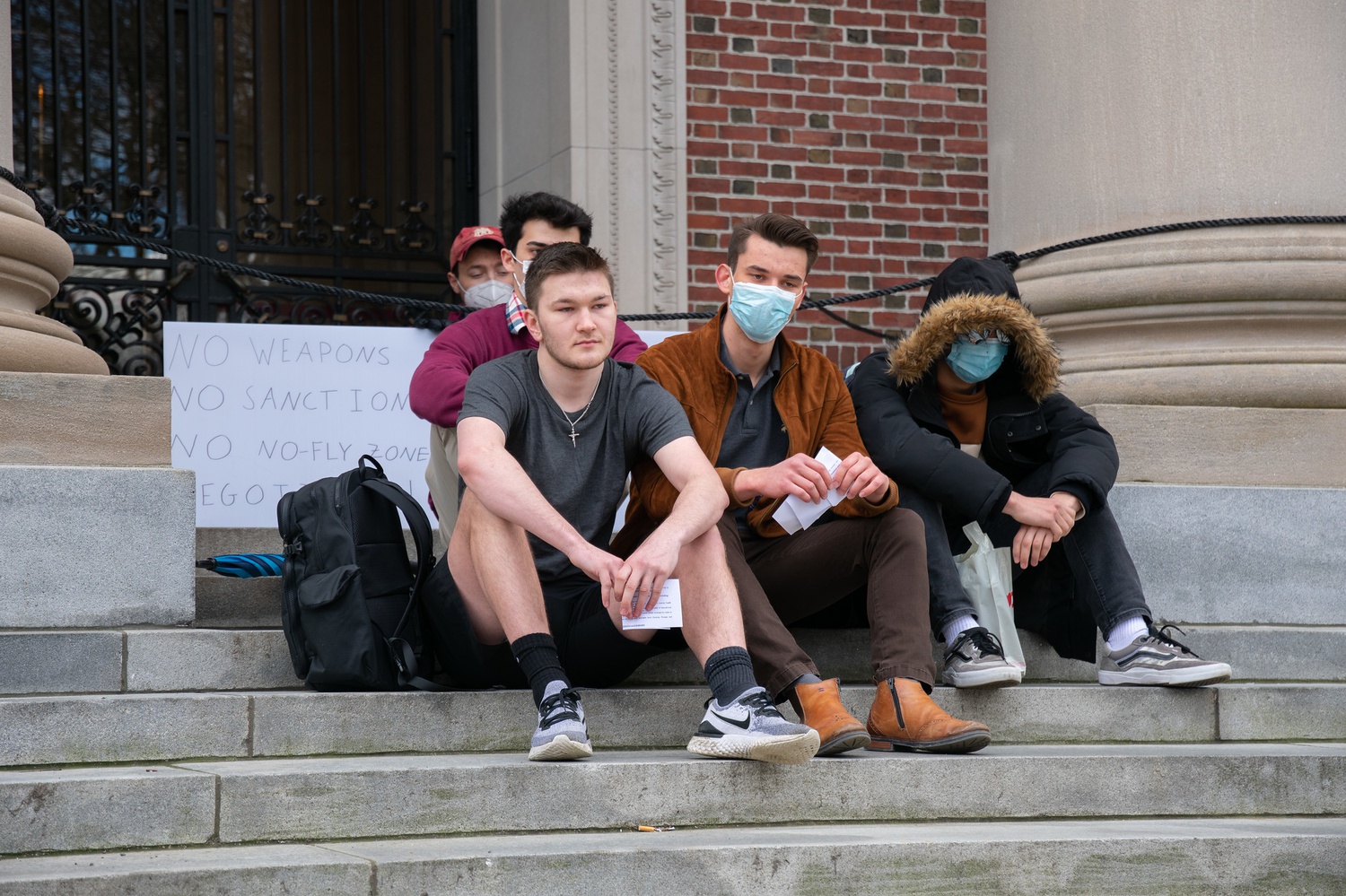 Four rallygoers blocked signs by held up by Michael A. Miccioli ’22 that read “Abolish NATO” and “No Weapons, No Sanctions, No No-Fly Zone, Negotiate!” By Julian J. Giordano

Ukrainian student Yegor Tverdokhlibov ’25 said he disagreed with NATO’s reluctance to join the fight against Russia.

“I think that NATO is afraid of Putin, but I don’t think they should be afraid,” he said.

“I think they’re wrong because if we stopped Russia right now, there'll be one hundred less wars in the future,” Tverdokhlibov added.