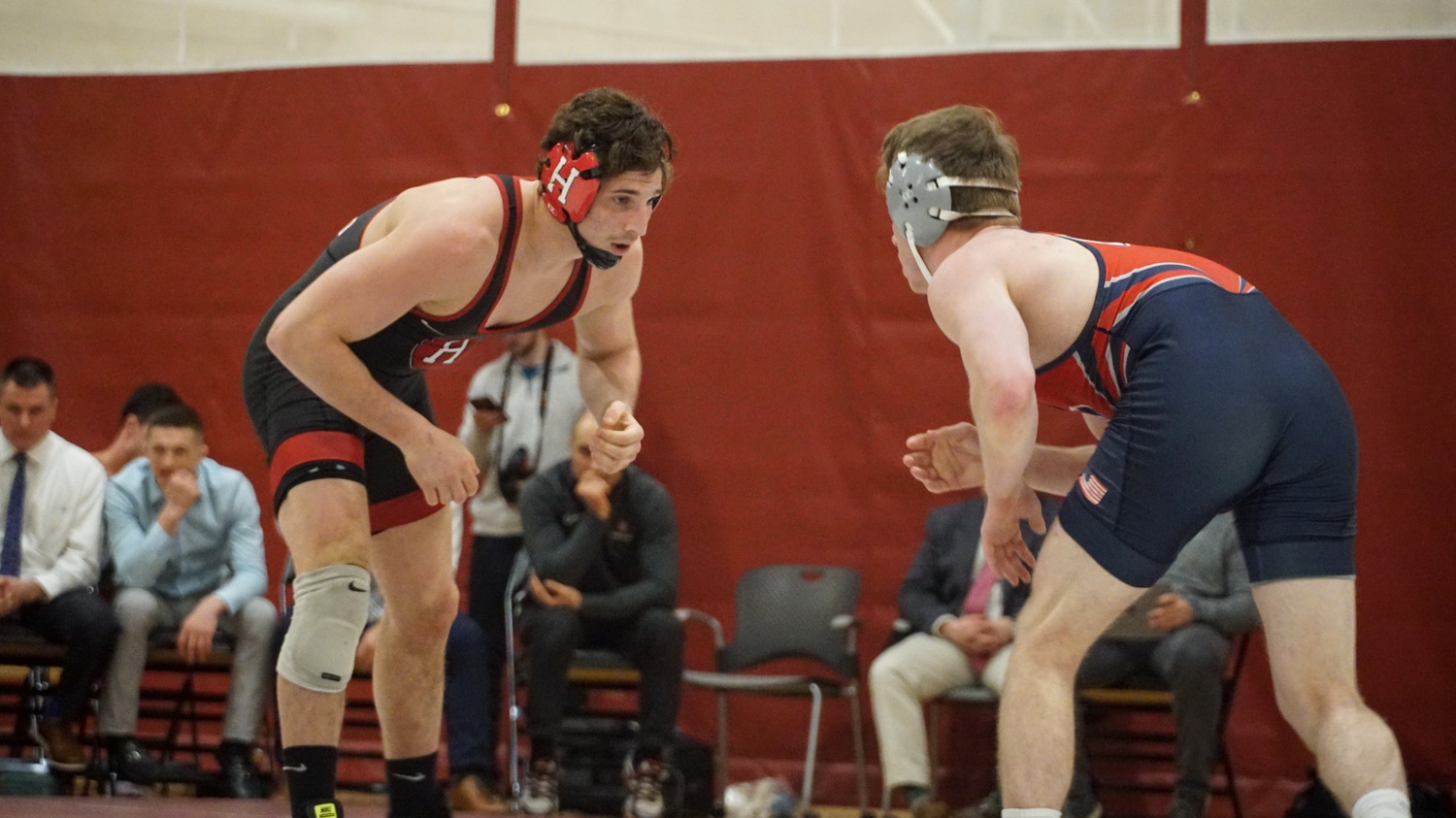 Then-first-year Philip Conigliaro wrestles against Brian Krawsowki in a match on Feb. 1, 2020. In 2020, Conigliaro took third place at the EIWA Championships. This year, during his sophomore campaign, he took first place at the EIWA Championships and was the No. 8 seed in the NCAA tournament. By Zadoc I. N. Gee
By Thomas Harris, Contributing Writer

To conclude a long season, including the challenges of fighting against Covid-19 isolations and injuries, Harvard Wrestling (4-5 EIWA) sent head coach Jay Weiss and sophomore Philip Conigliaro to Detroit, Mich. to compete in the 2022 NCAA Division I Wrestling Championships.

To qualify for the national championship, Conigliaro dominated the field at the Eastern Intercollegiate Wrestling Association (EIWA) conference tournament, going 4-0 to win the 165-pound weight class and securing the Crimson’s first EIWA title since 2016. He tallied a technical fall as well as three decision victories at the conference meet, earning the No. 8 seed headed into nationals.

In Detroit, Conigliaro opened Thursday with a 6-4 victory over No. 25 seed Brevin Cassella of Binghamton University in the Round of 32. Later that day, Conigliaro fell to the No. 9 seed, West Virginia’s Payton Hall, in a 7-3 decision in the Round of 16, which sent him to the wrestlebacks.

On Friday, the sophomore from Dedham, Mass. came out strong with a 5-3 win against the No. 25 seed, Lucas Revano, from the University of Pennsylvania in Consolation Round Two of wrestlebacks. He followed that up with a decisive 7-2 decision against Austin Yant of the University of Northern Iowa, the No. 16 seed, before his season was put to a close by the No. 3 seed, Iowa’s Alex Marinelli, in the Round of 12.

“It was three years in the making, so I was just really excited to go out there and experience it for the first time,” Conigliaro said. “The crowds were nothing compared to what I’m used to. You’re wrestling in front of 15,000 people instead of just a couple hundred.” 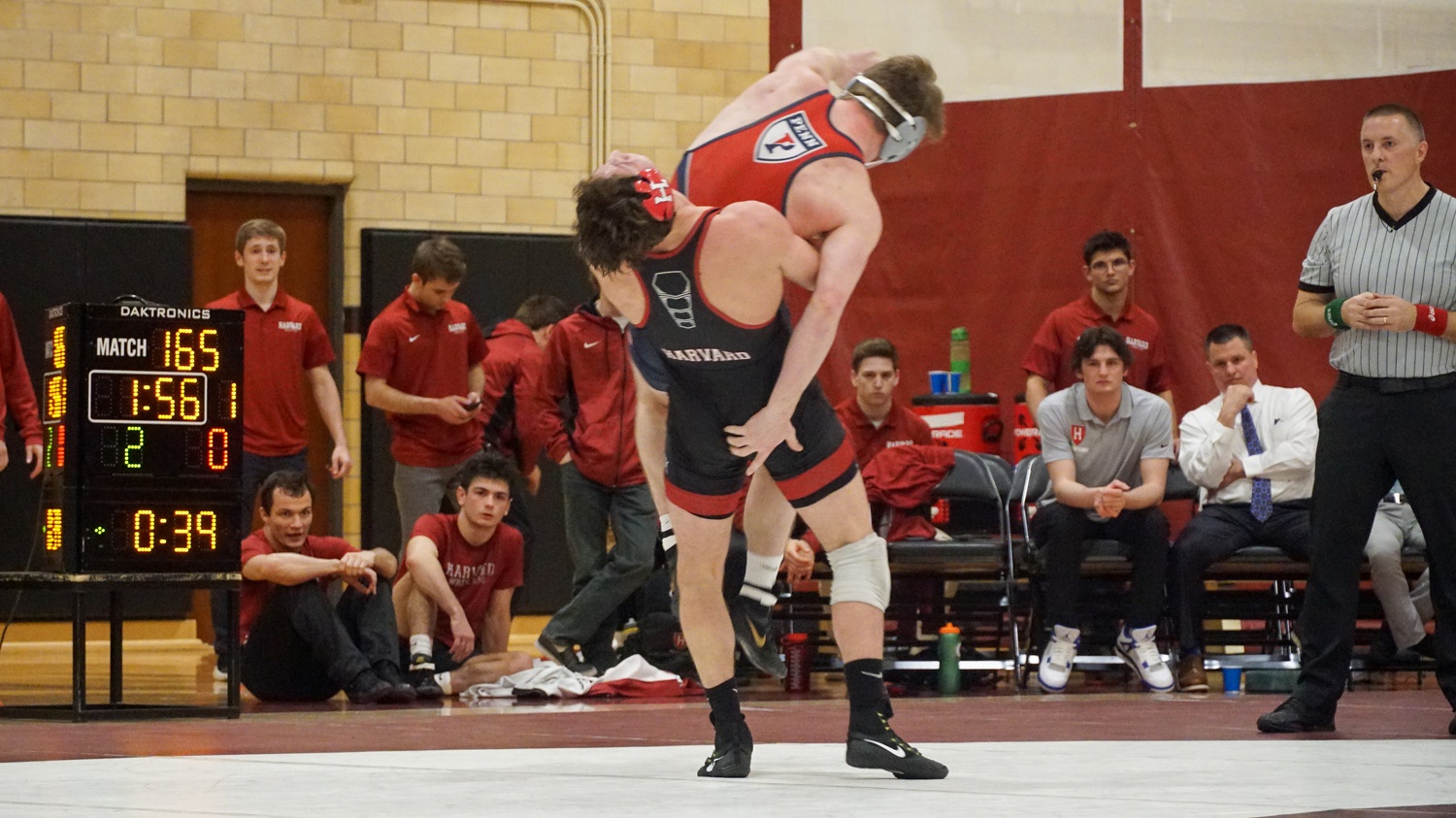 Conigliaro picks up his opponent before slamming him to the mat in the Crimson's match against the University of Pennsylvania on Feb. 1, 2020. By Zadoc I. N. Gee

“I don’t know if he had his best on the first day of the NCAA tournament, [but] the second day he came bouncing back hard,” said Harvard Wrestling head coach Jay Weiss when reflecting on Conigliaro’s performance. “Two big wins to put him into the Round of 12, which is the best and the worst round of wrestling. If you win, you’re All-American, you lose, you get a slap on the back,” he continued.

Conigliaro fell short in the Round of 12, losing 6-2 and walking away from a phenomenal year just short of All-American status.

“You walk back to that locker room, you have a lonely, lonely time,” Weiss said when asked if this result would motivate Conigliaro. “If that doesn’t motivate you, you’re in the wrong sport. Absolutely this is what’s going to motivate him and bring him to a better place down the road.”

“I was just grateful to compete,” Conigliaro said. “Being there wrestling the top ten guys in the country makes me believe that I can get on the podium for sure."

Conigliaro had some big takedowns that, combined with his escapes, led him to his three decision victories over the tournament weekend. Conigliaro’s focus was put to the test, as he was aware that he had to be at his peak performance all week.

“They call it March Madness for a reason, because anything could happen,” Conigliaro said.

Conigliaro credited his trust in his game plan during competition, especially against Revano, which allowed him to get a takedown in the first period. He then held his lead to emerge victorious and keep his hopes alive in the championships.

“We didn’t compete last year, and no one got hurt because no one cut weight, but to go from that to [competing], guys got banged up, guys got COVID,” admitted Weiss. “It was hard to say that it was a successful season, we dealt with a lot of adversity.”

However, despite all the adversity the team has faced, Weiss had nothing but positivity when speaking on Conigliaro and the team’s future.

“Phil’s real close. He can beat anybody, and it really sets us up for what’s going to be a good year,” Weiss said. “He has two more years in, so I think he’s going to win it.”

Looking ahead to next season, Coach Weiss is especially optimistic.

“We have the right guys in the right places, and I really think we probably [have] more talent than I’ve ever seen in my short career here,” said the coach of 27 years. “So, I think there are things that we’ve got to do. We just need to have a good spring and good summer: that’s what’s going to determine where we are going into next November.”