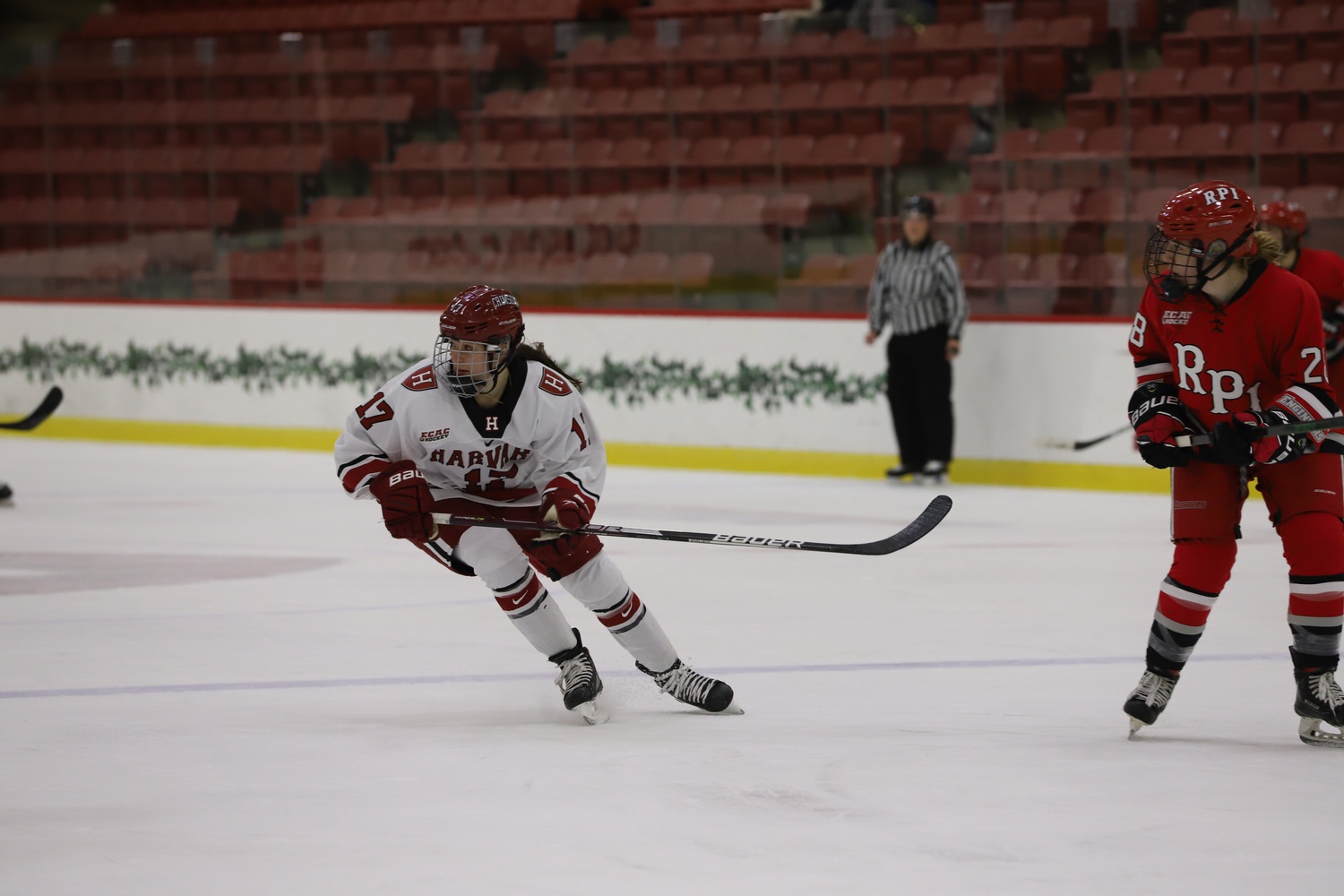 By The Crimson Staff
By Christopher D. Wright

Harvard traveled to Ridder Arena, the site of its last NCAA tournament game in 2015, hoping to kick off a successful NCAA tournament run. Its tournament run started with a matchup versus a familiar foe, the University of Minnesota Duluth; the Crimson had already lost to the Bulldogs twice during the regular season and looked to change its fortune.

“Duluth got the better of us today,” Crimson coach Katey Stone said.

Only 39 seconds into the game, UMD kicked off the scoring when forward Elizabeth Giguere delivered a pass from behind the goal that was sent into the back of the cage by Hughes. Around two minutes later, Harvard tried to mount an offensive of its own. After a series of saves, junior forward Kristin Della Rovere sent a shot that narrowly missed and hit the pipe. Intense back and forth continued throughout the period without any addition to the scoreboard. This was due in large part to the defensive effort of Crimson senior goalie Becky Dutton who bounced back after the early score to save seven shots in the period.

“Becky was a huge pillar for us and I wish we could have given her more,” senior defender Emma Buckles said.

The beginning of the second period was almost identical to the first. Harvard fell behind two goals after Anna Klein delivered a pass that was scorched into the back of the net from just inside the faceoff circle by Hughes. Midway through the second, the Bulldogs extended their lead when Hughes fired a shot from close range. The goal resulted in the first collegiate hat trick for the 2022 Patty Kazmaier finalist, an award that is given annually to the best division 1 women’s hockey player. Despite a three goal differential, both teams were tied at 19 shots after the second frame.

“They took advantage of their opportunities and we were playing catchup for the entire 60 minutes,” Stone said.

Six minutes into the final frame, McKenzie Hewett scored off a wrist shot to extend the UMD lead to four. The Crimson went on the power play with 13 minutes left in the game after the Bulldogs were assessed a two minute minor for body checking. However, it was unable to score and thus its comeback chances flickered out.

UMD’s first line of Klein, Hughes, and Giguere proved to be the difference in the matchup. The lineup, consisting of a former Patty Kazmaier winner and a 2022 finalist, accounted for all of the goals and assists throughout the first two periods.

“They’re a phenomenal line, there is no going against that,” Dutton said.

When reflecting on the season in the post-game press conference, Stone highlighted one characteristic that she thought was core to the identity of the team.

“The heart and soul of this team is nothing to be reckoned with,” Stone said.

For Harvard, the first round exit was a sad ending to an otherwise successful season. The season was the most successful for the Crimson since the 2015 season that featured a run to the NCAA tournament championship game. Harvard claimed the Beanpot Championship, Ivy League Championship, and ECAC regular season title all for the first time since 2015. The 21-22 season win total and No. 9/9 ranking were also the highest marks achieved since the 2015 season.