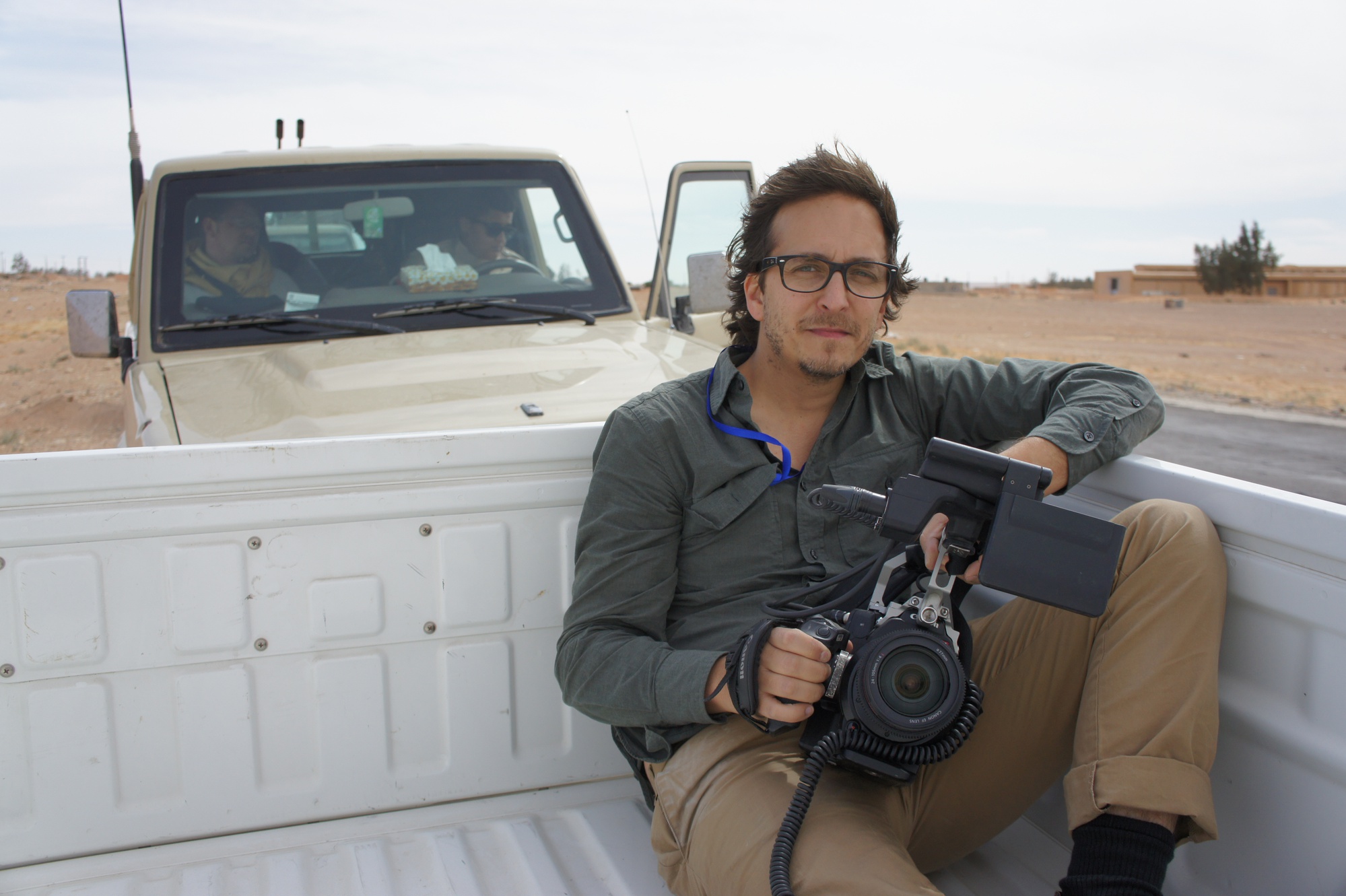 Brent Renaud, pictured in a Libyan Desert outside Sirte, at the time an ISIS stronghold. By Courtesy of Jeff Newton

Acclaimed filmmaker and former Nieman Foundation fellow Brent A. Renaud was killed on March 13 by Russian forces in Irpin, a suburb of Kyiv, while filming Ukrainian refugees fleeing from the war.
By Leah J. Teichholtz

Acclaimed filmmaker and former Nieman Foundation fellow Brent A. Renaud was killed on March 13 by Russian forces in Irpin, a suburb of Kyiv, while filming Ukrainian refugees fleeing from the war.

Renaud, age 50, was an American journalist who produced award-winning documentaries with his brother Craig. The Renaud brothers’ work often spotlighted the costs of conflict and included coverage of the ISIS invasion of Iraq and cartel violence in Mexico. Other work tackled drug addiction in New York and Arkansas and homelessness in New Orleans.

Renaud spent the 2018-2019 school year at Harvard through the Nieman Fellowship, which gives journalists the opportunity to audit classes, attend workshops, and forge relationships with other fellows. During the fellowship, Renaud studied the ways mental illness affects poverty and violence in America.

Renaud was shot while working on an assignment for Time Studios about the global refugee crisis. He was filming alongside journalist Juan Arredondo, another Nieman fellow, who survived the attack with injuries.

Over his career, Renaud and his brother produced films for many media organizations, including HBO, the New York Times, PBS, Discovery, and VICE.

‘He Let His Films do the Talking’

Jeffrey S. Newton, a television producer who was Renaud’s colleague and friend, said though Renaud was outwardly “quiet and reserved” he was also “relentless” in his work.

“He was always up early, hours before anybody else,” Newton said. “He just didn’t have it in him to sleep a lot — he was always thinking about the next thing to do.”

Renaud was rarely outwardly opinionated and instead used his documentaries to express his political views, Newton said.

“He let his films do the talking for how he felt about things,” Newton said. “You want to know about how he feels about economically disadvantaged people in the United States — you only have to go back and watch his films.” 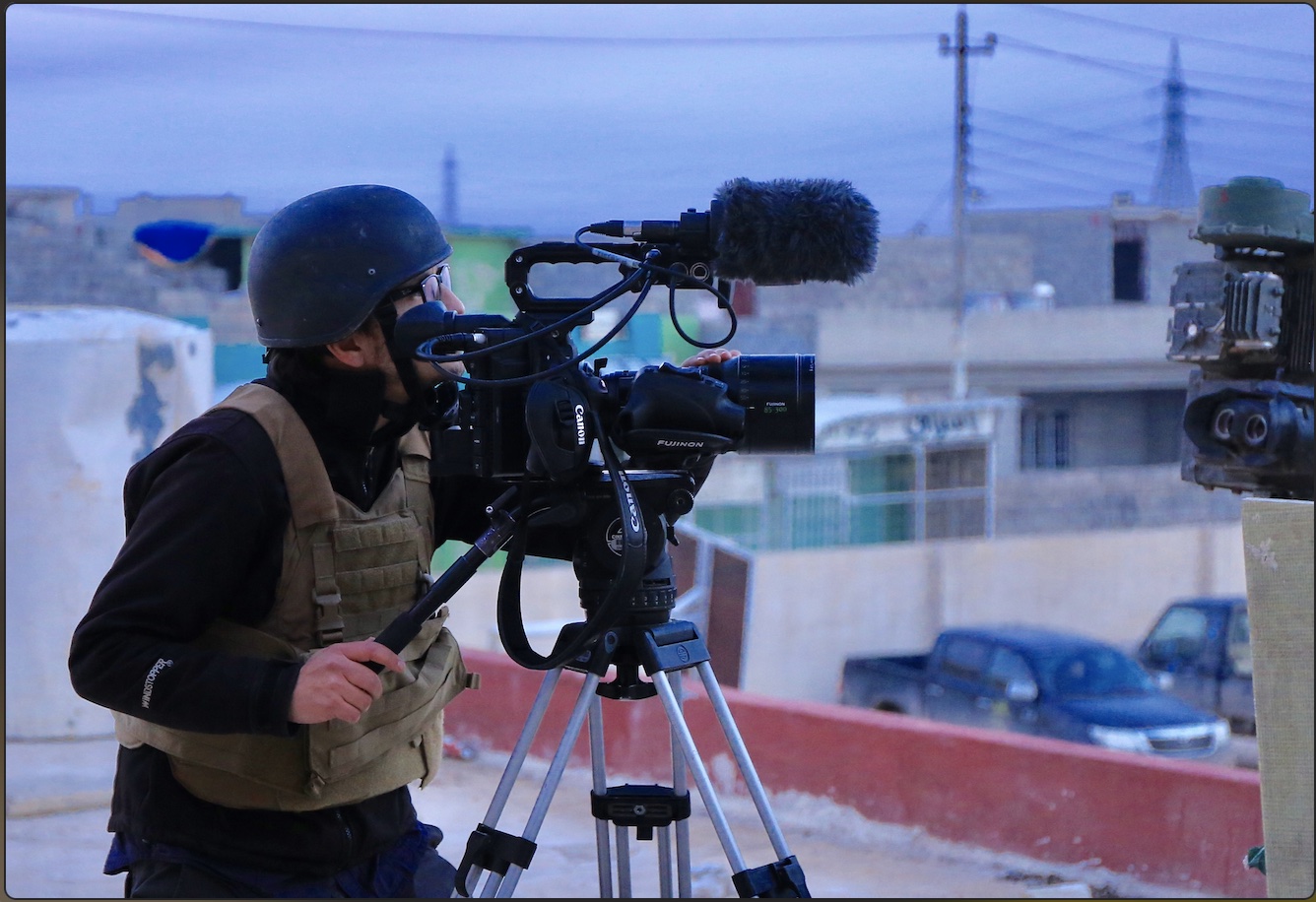 Newton said Renaud was just as talented an interviewer as he was a videographer. He recalled the way that Renaud’s “supremely basic questions” led to compelling responses from a soldier while filming in a warzone.

“The way he went about getting those stories told, I just sat sort of in awe of how good he was,” Newton said. “This is a guy that wherever I go around the world — not only can I trust him and I love working with him — but I’m going to learn from him for a great number of years.”

Mami K. Renaud, Renaud’s sister-in-law, wrote in an email that the Renaud brothers were like “night and day” and “moon and sun.” Brent, who was more introverted, differed greatly from Craig, a “social butterfly.”

“Together, they created a perfect portrait of what society really looked like. How people really were. What war was really like,” she wrote. “In order to shine a light on a hidden issue or problem of our world, you actually needed sun and moon.”

“He never rushed a story,” Lipinski said. “There was just a real kindness to the way he went about his work, even in the toughest and most challenging circumstances.”

Renaud was born in Memphis, Tenn., and grew up in Little Rock, Ark. He graduated from Southern Methodist University in 1994 and received a master’s degree from Columbia in 1996.

“He found his love for filmmaking in the place that he grew up in. And I think that gave him a special ability to look at people similarly, without any pretense of what he felt about them,” Newton said.

The Renaud brothers collected many awards for their work, including a duPont-Columbia Award for “Arming the Mexican Cartels,” a film about how guns from the U.S. fueled cartel violence, and another for “Surviving Haiti’s Earthquake: Children,” a film detailing the devastating 2010 earthquake in Haiti. 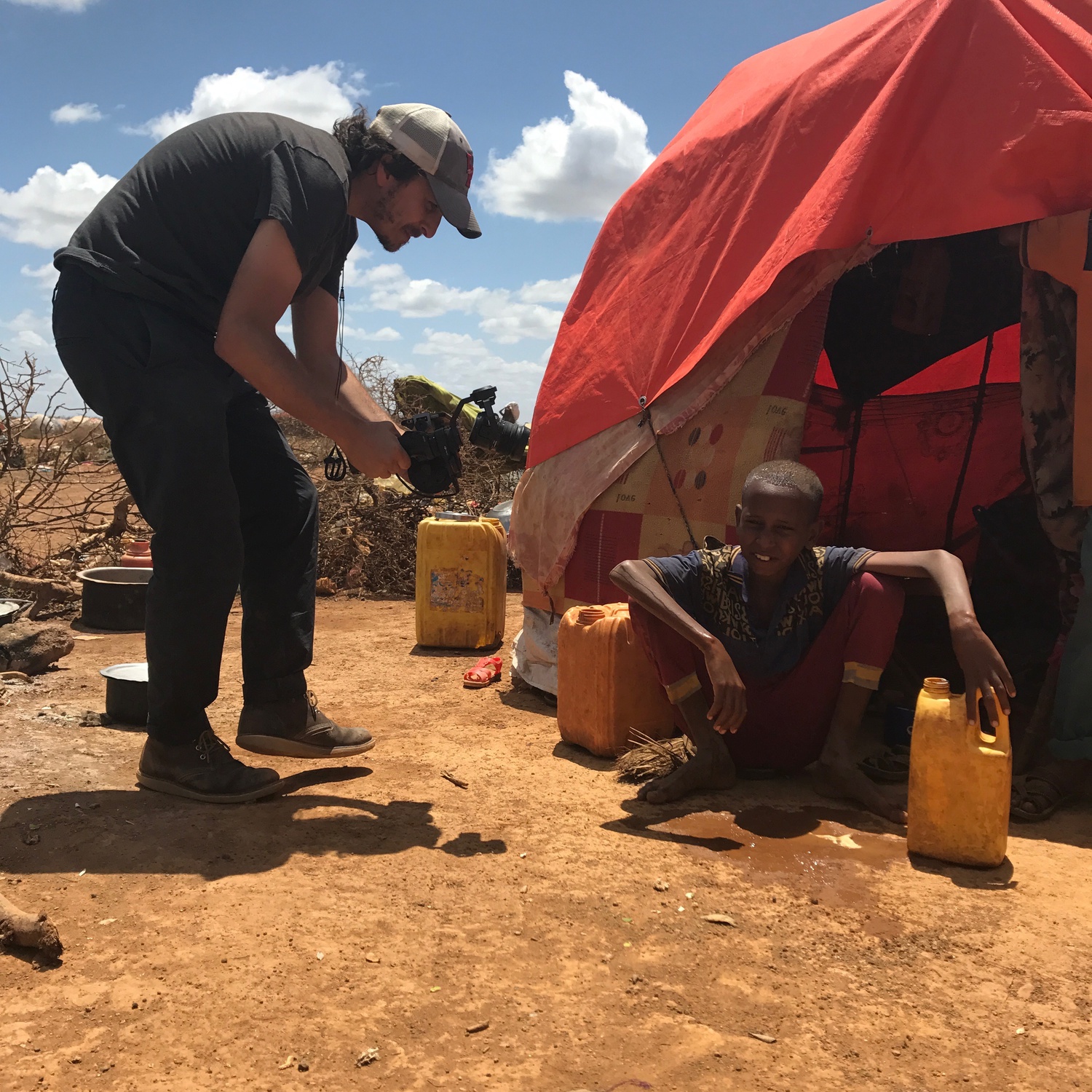 Brent Renaud films refugees at a UN refugee camp outside Baidoa, Somalia. Renaud was working on a project about the child soldiers of Al Shabaab, a terror group fighting for control of Somalia. By Courtesy of Jeff Newton

They received the Peabody Award in 2014 for “Last Chance High” — a documentary series about a Chicago school for students with severe emotional disorders.

Still, Newton said Renaud only “reluctantly” accepted the many awards his films garnered.

Steve B. Almond, an author who taught the narrative nonfiction class for Nieman fellows, said he was originally surprised to learn Renaud’s medium was film, not print, because he was such a talented writer and reader.

“He didn’t speak a lot in class, but you had the sense that he was listening and absorbing everything very deeply,” Almond said. “People really leaned forward when he spoke.”

Almond recalled an “astonishing” long-form piece that Renaud wrote for the class about facing difficulties finding his place during his upbringing.

“I think he’d gone through some tough situations in his own life and had converted that into a real effort to tell stories that made other people feel what it is like to be a troubled youth, for instance, or what it’s like for people who are in terrible circumstances,” Almond said.

Kaeti R. Hinck, a Nieman fellow in Renaud’s class, described him as “a great human” who always “surprised” those around him.

“He was incredibly kind, incredibly funny, and he was sort of a soft-spoken, quiet guy, but had a very mischievous sense of humor,” Hinck said. “Any time you talked to him, you would learn some new, wild story about his life.” 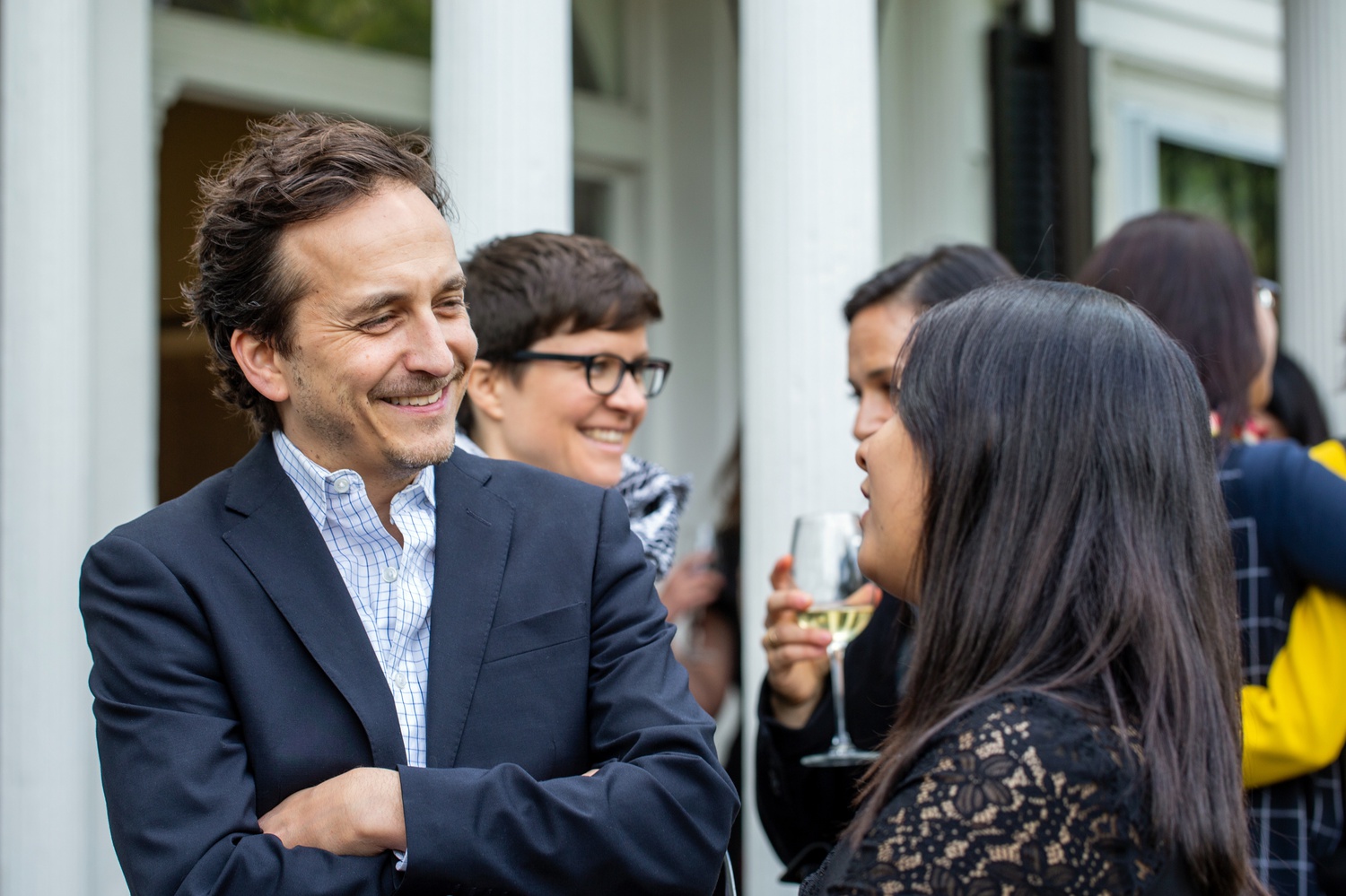 Hinck said Renaud emphasized getting to know his subjects and would stay in touch with them after the camera stopped recording.

“He really wanted to know the people whose story he was telling,” Hinck said. “And that meant walking alongside them and sitting with them in some of the most painful moments of their lives.”

“He deeply and genuinely cared,” she added.

Renaud was loyal, courageous, and sensitive, friends remembered. He loved animals and had a dog named Chai. He deeply valued his relationships with his family and was especially close to his nephew Taiyo.

“Brent Renaud was the best uncle in the whole wide world,” Mami Renaud wrote. “I know he would have happily died for my son. Anything to protect him.”

‘Very Generous in His Time’

In addition to traveling the world to work on his many films, Renaud devoted time to mentoring a younger generation of journalists at Harvard.

In the spring of his Nieman Fellowship, Renaud mentored students on the Multimedia Board of The Crimson, helping them create portfolios through photography critiques and providing advice on pursuing careers in journalism and honing their craft.

Former Crimson Multimedia chair Kathryn S. Kuhar ’20 said Renaud was “very generous in his time,” adding that his mentorship was an “incredible opportunity.”

“He spent hours teaching a bunch of college photojournalists and videographers about professional journalism and about storytelling, and about how to really get to know sources and tell those stories,” Kuhar said.

Sara Komatsu ’23-’24, Craig Renaud’s niece, fondly recalled Brent — whom she called a “big inspiration” — reaching out to her after she learned she had been accepted to Harvard.

“He was very kind and generous and open to giving me all the advice that you could possibly give,” said Komatsu, a Crimson Arts editor.

“He always showed up, whether it was for a presentation, or somebody’s birthday, or just grabbing drinks after a long week,” Hinck said. “He’s the kind of person that would just be there and be there for you.” 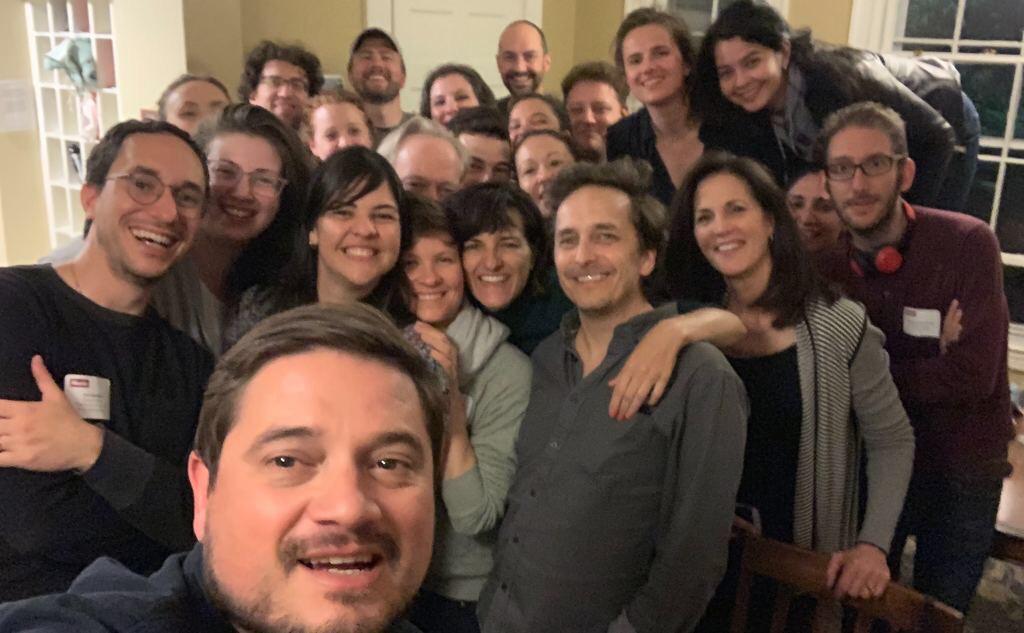 A selfie of the 2018-19 class of Nieman Fellows taken by Juan Arredondo, who was shot during the attack that killed Brent Renaud in Ukraine earlier this month. By Courtesy of Kaeti Hinck

Nieman fellow Tanya N. Ballard Brown, who first met Renaud through the program, said she remembered a trip she took to New York City for a standup show where he offered to host her at his home and even drove her to the door of her gig.

“I know when people pass away, people tend to focus on all the good things about them, no matter what the course of their life [was], but I don’t know anything bad about him,” Ballard Brown said. “Everything you hear about him is true.”

Renaud is survived by his brother Craig Renaud; his sister, Michele Purifoy; and his parents, Louis Renaud and Georgann Freasier.

On March 14, Ukrainian president Volodymyr O. Zelenskyy shared a letter expressing his condolences to Renaud’s family and said the people of Ukraine were also “mourning” his loss.

“May Brent’s life, service and sacrifice inspire generations of people all around the world to stand up in fight for the forces of light against forces of darkness,” Zelensky wrote.