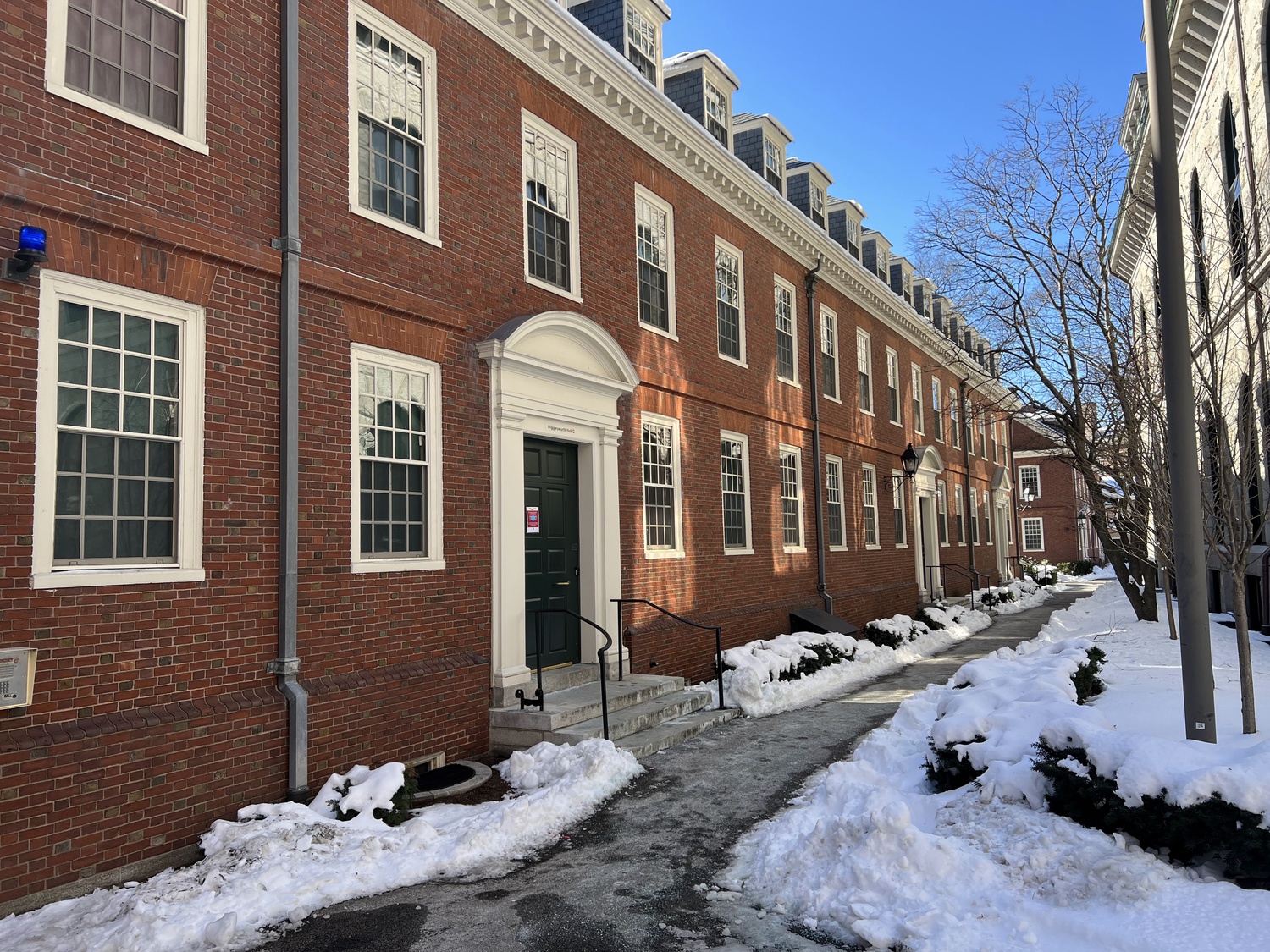 Wigglesworth Hall was one of three freshman dorms burglarized in the span of nine days. By Christopher Hidalgo
By Sarah Girma and Brandon L. Kingdollar, Crimson Staff Writers

During all three thefts, a suspect trespassed into a student’s residence, stole a laptop, and escaped undetected. Several other items were also stolen in the Wigglesworth burglary, including two additional laptops, an iPhone, and an iPad.

“In both instances, occupants reported that while they were sleeping, someone climbed through their first floor window and stole laptops, Air Pods, a backpack, and a wallet from their rooms,” Catalano wrote.

In the advisory, Catalano reminded students to secure their dorms’ windows and doors and urged them to report any suspicious activity in or around the undergraduate residences. He added that it was unclear whether the Mower and Wigglesworth incidents were related.

Nicholas D. G. Apostolicas ’25, who lives in Mower Hall, said he had left the window in his first-floor suite’s common room open about six inches while working on a project in his bedroom next door. Around 2 a.m., an intruder slid open the window screen and climbed in.

“I was completely oblivious to what was happening,” Apostolicas said. “If I instead just went out to say hi to my roommate or something, I wonder about how that would have gone down.”

According to Apostolicas, the members of his suite did not notice anything amiss until the following morning when his roommate texted their group chat to ask if anyone had seen his laptop. Soon after, Apostolicas noticed that some of their belongings, such as masks and water bottles, had been thrown out of their common room window.

“Things started to click then, and I was like, ‘Oh, shoot,’” Apostolicas said. “We called HUPD but, honestly, they say ‘Oh, we'll look into it,’ but we just know nothing's going to be done.”

“If they had cameras or stuff that would have been a lot different, but there's really just not much they’re able to do in order to help,” he added.

Four days later, HUPD closed the case with no resolution.

Apostolicas noted that though several other expensive items were also in the common room, such as his camera, the thief had only stolen the laptop.

“The whole situation is quite bizarre and kind of frightening as well,” he said.

Connor J. Buchheit ’25, who lives in Mower Hall in the dorm adjacent to Apostolicas’ suite, said he was shocked to learn of the incident.

“I certainly felt a little bit scared because it’s the dorm right next to me,” Buccheit said. “We've been keeping the window closed ever since that happened at all times.”

Sabrina M. Freidus ’25, whose laptop was stolen during the Canaday burglary two days after the advisory, said she was surprised that someone burglarized her suite given that it is not on the ground floor.

“I always thought that, being on the fourth floor, we were safe from anything like that,” Freidus said. “The fact that we have a hallway door and a suite door — I just didn't think that it would happen.”

Freidus said she noticed the suspect — whom she described as a tall man wearing a puffy navy jacket — standing outside her door as she was leaving her suite Sunday evening. She thought the man was one of her suitemates’ guests and allowed him to enter. When she returned, she could not find her laptop, though none of her floormates’ belongings had been taken.

Freidus noted that her laptop was still connected to Apple’s Find My application, and that since the theft, she had watched its movements using the service. Since the burglary, the laptop has been transported to Medford and Boston’s South Bay neighborhood.

“I don't think it's going to change my mindset when I walk around campus,” Freidus said. “But I am definitely going to be better about keeping our suite door locked.”