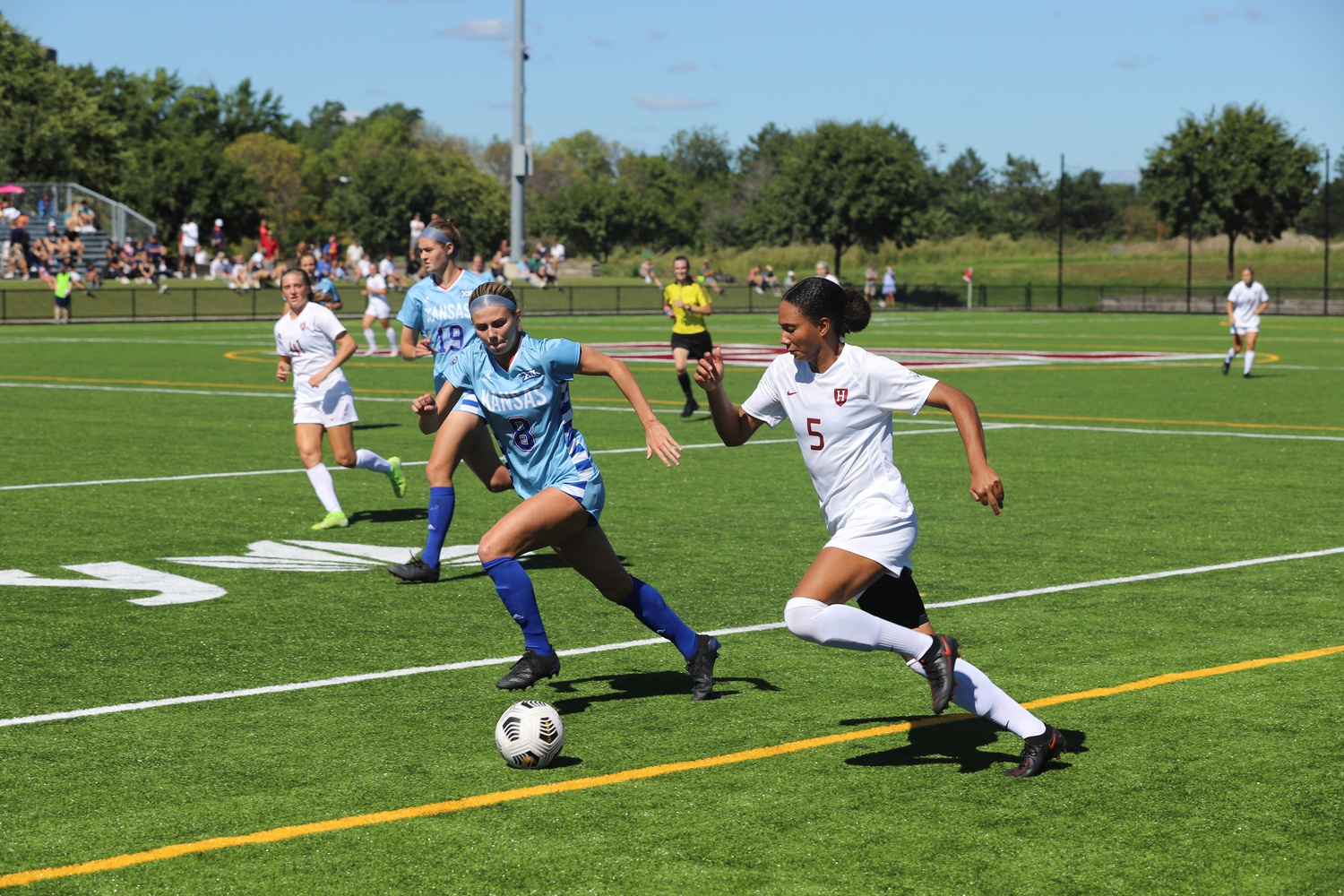 First-year defender Jade Rose pushes the ball down the pitch during a game against Kansas on Sept. 19. Harvard went on to win 2-1. By Owen A. Berger
By Zing Gee, Crimson Staff Writer

While Harvard’s season (12-3-1, 5-2-0 Ivy League) may have ended late last fall after an impressive regular season and an at-large bid to the NCAA Tournament, numerous Crimson players are either slated to or have already taken the field across the world this spring with their respective national teams.

“I think it’s fantastic for these players to get such good experiences at that level,” said head coach Chris Hamblin. “It is the highest level available to represent your country at the World Cup, and so to have those experiences…and bring them back to our team and our environment, is such a valuable asset for our program.”

Sophomore forward Cayla McFarlane is playing for Trinidad and Tobago’s senior national team as they gear up for the CONCACAF Women’s Championship in Mexico this July, which is the qualifier for both the 2023 World Cup in Australia and the 2024 Summer Olympics in France. McFarlane has Trinidadian citizenship through her mother, who was born there.

McFarlane started during both of Trinidad and Tobago’s matches on Feb. 17 and Feb. 20, in which they defeated Nicaragua 2-1 and Dominica 2-0, respectively.

“I definitely think there's a level of physicality that the international game has that college soccer just does not…it's just a lot more intense,” said McFarlane. “Every little bit, every little aspect, of what we do internationally is taken so seriously…and we really try to show and demonstrate how taking something extremely seriously can really advance our game here at the college level.”

Sophomore goalkeeper Anna Karpenko and first-year defender Jade Rose are both playing for Canada’s U20 squad in the U20 CONCACAF Championship in the Dominican Republic, which is being held right now from February 25 through March 12. The event is also Canada’s qualification route for the 2022 U20 World Cup in Costa Rica.

Rose and Karpenko’s Canada squad has excelled thus far in their most recent leg, having won their last five matches, with their sixth and final competition slated for later today against Mexico. Hamblin spoke highly of the duo, highlighting their previous accomplishments and their bright futures.

Rose started fifteen games last fall, and was second on the team in minutes played. She was also named to First-Team All-Ivy, in addition to having won the Canada Soccer Youth Player of the Year award twice. Karpenko, who is starting in goal for the U20 team, played in fourteen games last season, splitting time in goal with junior Hannah Gardner.

First-year midfielder Hannah Bebar is playing for the U.S. U23 national team which is currently midway through the Thorns Preseason Tournament, having faced off against the National Women’s Soccer League’s Chicago Red Stars and Portland Thorns FC so far, drawing 0-0 and losing 0-3, respectively, ahead of their third and final upcoming match against OL Reign on Friday, March 11.

Bebar is coming off a fantastic rookie season, having been awarded Ivy League Rookie of Year, First Team All-Ivy, and Third Team All-America. She ranked fifth nationally in assists per game with 0.67, led the Ivy League in assists, and finished with five goals and ten assists.

While the Crimson has historically always had a number of players playing at the international level, Hamblin alluded to the increasing amount of active players competing with their respective national teams—including a handful of players beyond just McFarlane, Rose, Karpenko, and Bebar—and the benefit it has on the program.

Hamblin also referenced the level of commitment and time it takes to balance Harvard academics and athletics with national team preparation and play, applauding his players for doing so. He explained how he and his coaching staff communicate frequently with the coaching staffs of different national teams both to help players prepare for international play but also to receive feedback from their time playing on the international circuit.

Players focus much more on individualized training plans and skill-work when in the college offseason. Preparation for playing in temperate environments like the Dominican Republic and Costa Rica requires some creativity during wintertime in Cambridge, which for the Crimson includes using stationary bikes inside the Blodgett Pool building to condition in a warmer, more humid environment.

As international play continues, McFarlane, Rose, Karpenko, and Bebar have a chance to advance and qualify for even bigger stakes—World Cup and Olympic appearances—all the while gaining valuable experience they can use to hone their game heading into next fall’s NCAA season.

“It's really special for us to have such a diverse group of players from all around the world bringing in their experience to our locker room,” said Hamblin. “Soccer is the global game, Harvard is the global university, and so it's a really, really cool combination that we’re able to get together and put the Harvard women's soccer product out on the field from all corners of the planet.”