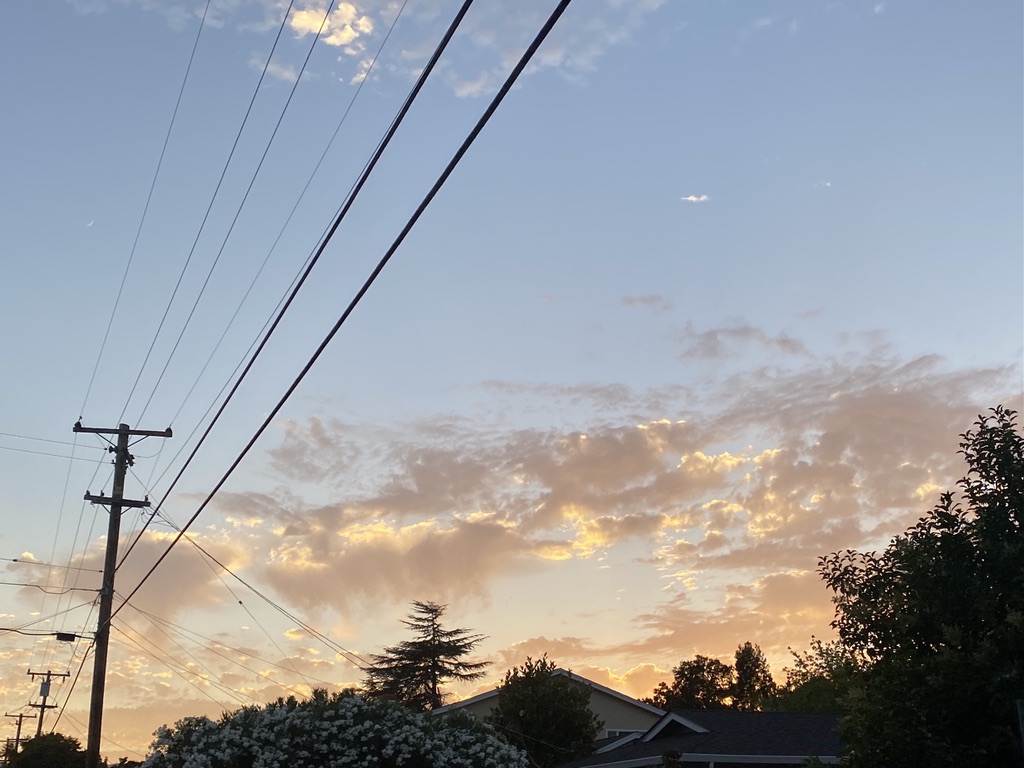 Sunset paints the clouds a pale orange near the author's house in California. By Courtesy of Kaitlyn Tsai
Advertisement
Advertisement

In a time when I felt I had nothing, not even a sense of who I was, I remembered that the earth gives me — gives us — so many gifts that I don’t have to work to earn or prove myself worthy of.
By Kaitlyn Tsai

A creek cuts through the monotonous suburbia of my hometown. When I’m home, I make a point of visiting it on my daily walks, crunching through the leaves blanketing the makeshift dirt paths paved by creek-goers before me. I sit on a rock along the bank, tree branches arching just over my head, and watch the water flow: the mesmerizing ripples over the hundreds of pebbles on its floor, the continuous cascade downstream. My mind quiets. I inhale, hold the earthy, woodsy scent in my lungs for as long as I can, and when I exhale, I imagine my breath is pure, purged of the negative energy churning within me. In these moments, only the creek matters.

I started falling in love with nature when I had nothing else to fall in love with. Specifically, during the period beginning in spring of 2019, when I had lost and lost and nearly lost again: a breakup, a death in the family not one week later, and just months after that, a near-suicide. Despite needing others more than ever, I felt as though I didn’t have anyone to turn to. My friends remained by my side, but I feared burdening them with my problems. My parents were supportive of me, but after my grandfather’s death they were shouldering far more emotional strain than I’d ever seen before, and I didn’t want to add more to their plate.

With no one to lean on and still reeling from these upheavals, I felt displaced. My heart felt like a meaty, throbbing something, its strands of broken tissue dangling like the roots of a plant ripped from the earth.

In an effort to ground myself and find some semblance of control over my life, I convinced myself to work out more often, eat clean, be healthy, lose weight. I told myself it was part of my journey to self-improvement. I told myself I would create a new me, a better me. 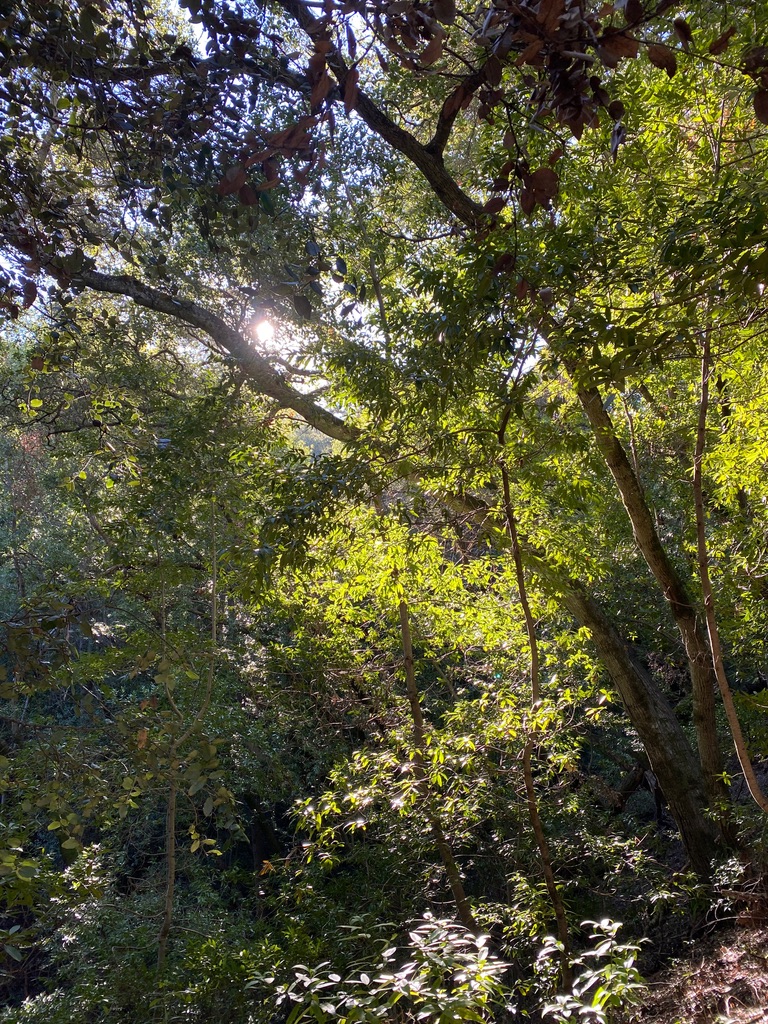 Sunlight illuminates the trees on the author's favorite hiking trail in Villa Montalvo. By Courtesy of Kaitlyn Tsai

It started with cutting out “junk” food and spiraled quickly when I began counting calories. Lying on my bedroom floor in the summer, I watched the fitness app light up on my home screen as it finished installing. I bit my lip and opened it, entering my height, weight, and goal: lose weight. My suggested calorie intake popped up on the screen. Without thinking, I pressed a little minus button, watched the number drop, drop, drop. Almost immediately, I could feel the digits hanging over my head, a ceiling I couldn’t penetrate.

For almost an entire year, my life became consumed by calories and the number on the scale. I ate almost nothing except for fruits and vegetables and the obligatory bits of rice I’d have with lunch and dinner. When I knew I’d be eating out, I would panic and eat as little as possible earlier in the day. I exercised excessively, going on runs even in over 80-degree weather. Without even realizing it, I had made my life a living hell.

Yet throughout it all, I found ways to handle my emotions in healthier ways, journaling and reconnecting with my love for writing. And most of all, I did the best thing I could’ve done for myself at that time: I went outside.

What started as a chance to be alone with my thoughts quickly evolved into something far more therapeutic and beautiful. I became enamored of the fragrant jasmines blooming in people’s front yards, the dewdrops clinging to wild grasses along the creek after a rare bout of California rain, the salmon clouds that always made the tenderest nostalgia swell in my chest. I turned to hiking, immersing myself in the rich scents of the forest, the light chatter of birds and squirrels, the solidness of the earth beneath me. 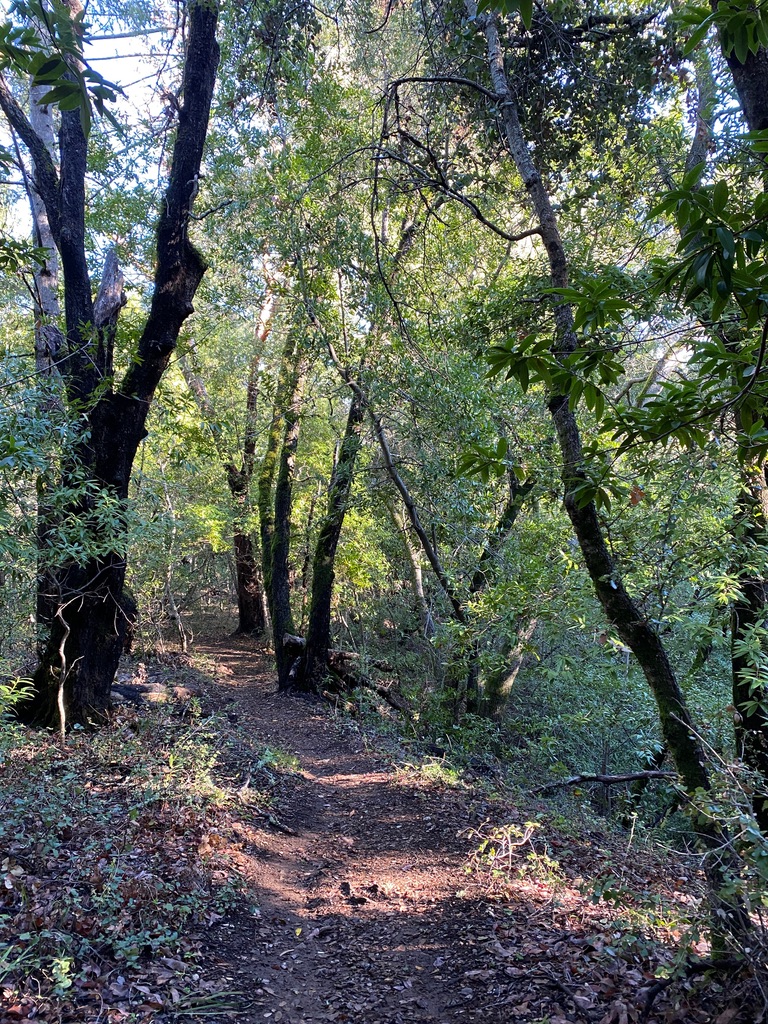 Walking along the author's favorite trail in the California winter. By Courtesy of Kaitlyn Tsai

In nature, away from others, away from the gloomy clouds that swirled in my mind, away from everything, I found comfort tucked in every crevice of the earth. In a time when I felt I had nothing, not even a sense of who I was, I remembered that the earth gives me — gives us — so many gifts that I don’t have to work to earn or prove myself worthy of. And I seized every gift I could get, held as much pine-scented air as I could in my lungs, if only to feel grateful, again, that I was in this world.

But it wasn’t just these reminders of beauty that kept me grounded. All around me, I noticed different stages of life. During a rare period of springtime rain, I saw flowers battered to the earth, leaves and branches hurled into the river, signs of destruction everywhere. Yet on a walk by the creek the day it stopped raining, I found myself pulled toward the myriad of fungi that sprang from the now-moistened earth and the lush wild grasses and clovers coating the sides of the path. Staring at the green, I felt something open in my chest, and it hit me: Growth and decay, sudden destruction and loss, regeneration and healing — all of it is natural. And all of it feeds into each other.

In the most comforting way possible, I felt small. I’ve never been a spiritual person, but for the first time, I understood the solace one can find in being connected to something greater. But instead of feeling connected to something beyond earth, I was struck by how painfully and beautifully human I was, how I was just another being on this planet. Everything I was going through was just part of those cycles of decay and regeneration. As surely as the grasses would burst from the earth more lush than before, I would find some way, somehow, to grow from this period of my life. 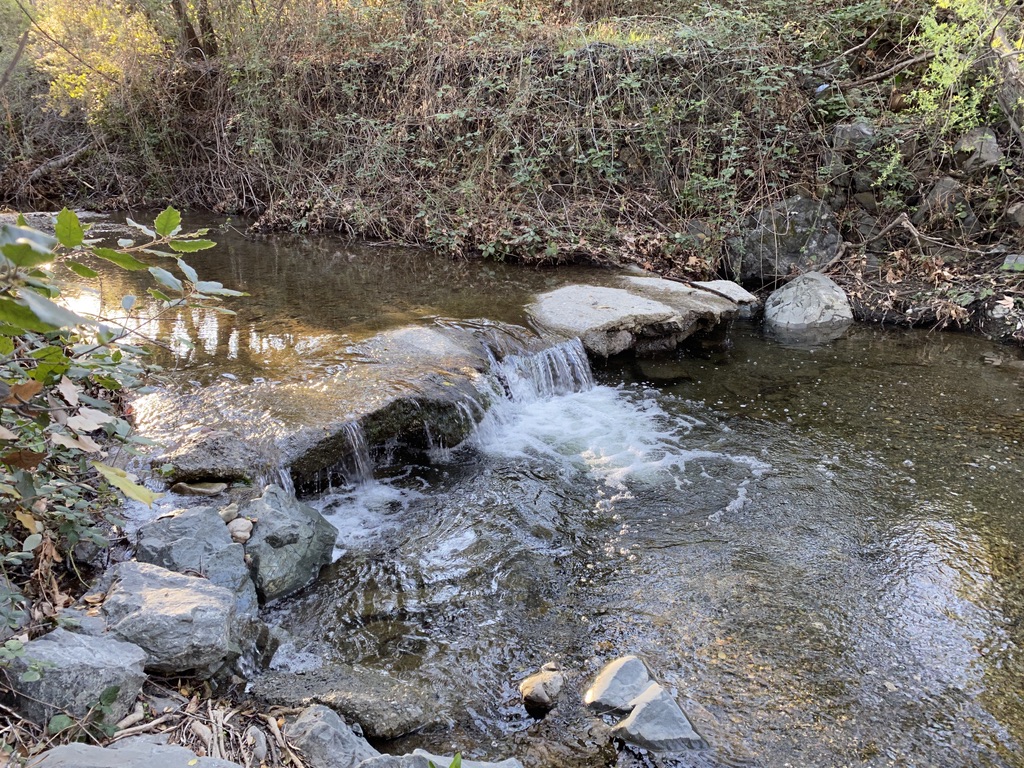 A waterfall on Saratoga Creek, which runs through the author's hometown — her favorite place to slow down and decompress. By Courtesy of Kaitlyn Tsai

It wasn’t as if this realization was a panacea, and it took a while for me to internalize it. But it reframed how I viewed this period of time and served as a light at the end of a tunnel that grew shorter and shorter each day. I let myself feel all the negative emotions that hit me, knowing I couldn’t fully heal without first embracing and understanding all of my pain.

When I beat myself up for not healing quickly enough — when I found myself slipping back into unhealthy coping habits or ruminating on everything that happened — I remembered how growth is never linear, how it almost always relies on death first. I would step outside and watch the fragile silhouettes of leaves sway in the wind as the sun set. I remembered that there are ends to everything, remembered that these leaves will return to the earth, help fuel the growth of another plant, another being. I remembered that, in time, soft, feathery green will blossom from bare branches again. And I remembered that no matter what, the sun will rise, that it paints the sky with the most brilliant colors right as it emerges from the dark.

And life went on, one step, one setback, one cycle at a time.