‘The Marvelous Mrs. Maisel’ Season Four Premiere Review: Caricature With a Side of Comedy 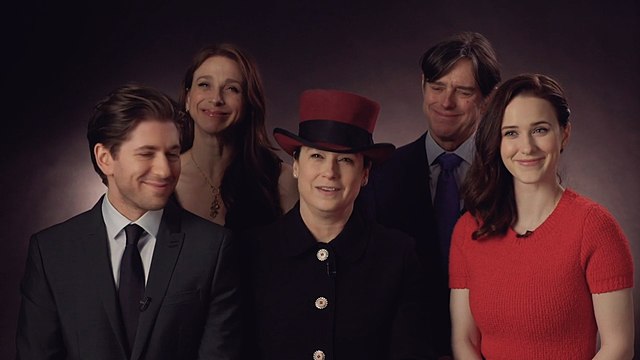 The cast of "The Marvelous Mrs. Maisel." By Courtesy of Peabody Awards
By Serena Jampel, Contributing Writer

Sometimes I fantasize about being Midge Maisel: a beautiful, fashionable, hilarious Jewish woman who is simultaneously put-together and a trainwreck. But while I have related to her in the past, she is becoming less of a fabulous icon and more of a walking stereotype. For the last three seasons, I have loved watching “The Marvelous Mrs. Maisel” because, clumsy as it is with stereotypes, I have found it to be one of the only truly funny shows that centers Jewish people.

Previously, Midge has shined as a stand-up comic, and the various plot developments, from the Maisel family trip to Steiner resort in season two to Midge’s stint in Las Vegas in season three, have given fans so many memorable moments and laughs. But after three seasons of witty stand-up and endearing chaos, it appears that the show’s quick pace and punchy jokes might be losing steam. The premiere of season four showcases the characters and family dynamics fans have grown to love but stumbles when it comes to delivering comedy beyond mere caricature.

Following the success of shows like “Euphoria” and “Succession” with their weekly release schedules, two episodes of “The Marvelous Mrs. Maisel” are released every Friday. The first episode of season four of “The Marvelous Mrs. Maisel,” released on Feb. 18, opens with what can only be described as a “revenge tirade.” Midge (Rachel Brosnahan), clad fabulously (as always) in black, is standing before the microphone at the Gaslight Café delivering yet another angry, slightly unhinged rant-disguised-as-comedy about a man who has wronged her. Fans of the show will appreciate this callback to the iconic scene from the first ever episode of the show — in which Midge hilariously lambasts her husband Joel for his infidelity.

But Midge Maisel is no longer the perky, foul-mouthed housewife of season one. After a brush with international fame at the end of last season that ended in disaster (because, lest the reader forget, Midge effectively outed her boss in front of his entire community), Midge is more demanding; she has become a prima donna of the comedy scene. Her diatribe against Shy Baldwin (LeRoy McClain) delivers many of the same tropes we have come to expect: poking fun at the audience and making obligatory yet crude jokes about Jewishness. The difference is that by season four, it has become much less funny.

“Hello Prague, remember the Jews?” quips Midge right after learning she has been fired from her tour of Europe. In this episode, the viewer is pummeled again and again with one-note one-liners about Jewishness. Midge implies that Klezmer Clarinet would be a good form of torture; Abe Weissman (Tony Shalhoub) tells Midge to work Jesus Christ into every conversation in order to fit in in Prague; Midge works a random joke about “antisemitic Nazis” (as if Nazis could be anything but antisemitic) doing their taxes into a completely unrelated set.

Now don’t get me wrong. Money jokes can be funny, especially when they come from a self-deprecating angle. But when Abe says to two little boys “did you guys bring any money from home? No, I guess I’m paying,” at his grandson’s birthday party, or when Moishe (Kevin Pollak) harps on Midge to repay the loan he gave her while riding a Ferris Wheel at Coney Island, friendly family banter becomes a dig at Jewishness disguised as a joke.

The audience is supposed to find humor in the fact that Moishe lent Midge money, who then tries to repay him with money she entrusted to Susie (Alex Borstein), who has gambled it all away. Susie must then ask Joel (Michael Zegen) to cut her a check so she can give Midge her money to repay Moishe, who is Joel’s father. Not only is it convoluted and confusing (why is Moishe so preoccupied with the money when he lent it to Midge, his ex-daughter-in-law, so recently?), but it plays into harmful stereotypes and tired antisemitic tropes. And crucially, these jokes are simply not funny or interesting.

The momentum of the episode grinds to a halt as the characters bicker over money owed, and since the audience knows none of the characters will ever be in real financial trouble, the whole sequence is gratuitous. This episode seems to loudly reaffirm that Midge is a Jewish-American princess, Moishe is a stingy Jewish factory owner, and that the show will simply continue to tout stereotypes as comedy as the previous seasons have done.

The episode closes with Midge realizing her desire for autonomy in her comedy, but this potentially empowering moment comes across mostly as a display of entitlement and privilege. Having decided that she only wants to say exactly what’s on her mind, Midge insists that Susie, her agent, only set up gigs in which she headlines (“I wanna be me every time I walk on that stage.”) When Susie, ever the pragmatist, responds brusquely “how am I supposed to do that if I can’t even book you?” Midge raises her eyebrows and responds “I don’t know. You’re my manager. Manage me.” Midge’s lifestyle as a beautiful woman who essentially just carouses around Manhattan and buys the latest haute couture is entertaining to observe, but it is dialogue like this that showcases how out-of-touch with reality she truly is. Her journey to become a self-made woman in comedy will be interesting to watch in the following episodes, but only if it starts to show respect towards Susie’s hard work and a check on her narcissism.

Indeed, the premise of Susie and Midge changing the comedy industry has great potential, but only if their motives reach beyond Midge’s personal success. Forthcoming episodes should play up Midge’s comedic talent and leave the antisemitic coding and diva attitude on the cutting room floor. Fans of “The Marvelous Mrs. Maisel '' can count on a season full of fashion and flair, but whether the season will be worth kvelling over remains to be seen.