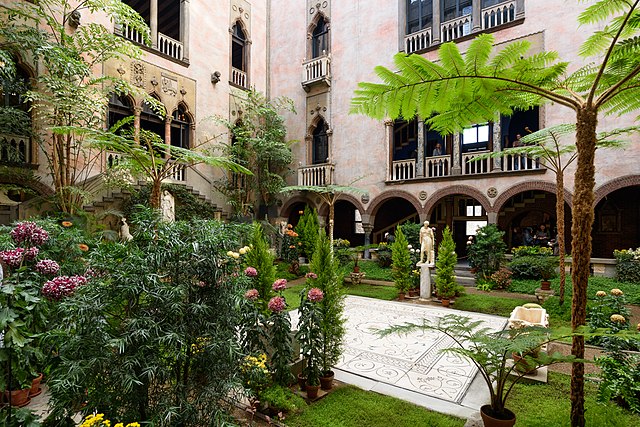 The garden at the Isabella Stewart Gardner Museum. By Courtesy of King of Hearts
By Lena M. Tinker, Crimson Staff Writer

Locals and tourists alike flock to the Isabella Stewart Gardner Museum to view a diverse collection of art and beautiful indoor gardens, but the crowd gathered on the afternoon of Feb. 13 was there to attend a Valentine’s Day concert with Peter and Kara Dugan.

The Dugans, a married couple, created a love-themed program as part of the Gardner Museum’s weekend concert series, with Kara as a mezzo-soprano and Peter playing the piano. The sold-out performance, which took place in the museum’s Calderwood Hall, featured songs from the likes of Florence Price, Stevie Wonder, and George Gershwin.

The Dugans participated in the Gardner Museum’s virtual Valentine’s Day program in 2021 when they were invited to record a snippet of a never-before-performed love song composed by Italian composer Francesco Paolo Tosti that was found in Gardner’s collection. As in-person concerts are again in full swing in Boston, the Dugans were invited to perform live this year.

“There’s something really freeing to be on stage and know that it’s just then, it’s just in that moment, and after that it’s a memory. I love that,” said Peter Dugan in an interview with The Crimson.

Kara Dugan explained that at the core of their musicianship and musical collaboration is a philosophy of experimentation with their instruments and a drive to learn new songs while also performing music that they personally love and grew up with.

“I think it's really fun, and for us it's really personal. We had a wide variety of repertoire on the program because we thought that that sort of spoke to us as artists, and because we thought it told a story in a really interesting way” said Kara Dugan. “We like the idea of bringing people in with a lot of variety in our selections.”

The pieces were certainly personal, including “It’s Not Me, It’s You” — a comedic song composed for them by Peter’s brother Leonardo Dugan — and Jimmy Dorsey’s and Paul Madeira’s “I’m Glad There is You” (1941) — the song they danced to at their wedding.

“I think it’s really exciting to have live music again,” said audience member Martina Diekmann. “I really like the mix of the program, it goes into different directions.”

The Dugans often provided context for their songs before performing, contributing to an intimate and engaging stage presence. Kara, perched on a stool, and Peter, looking up from his piano bench, exchanged glances and bantered candidly throughout the performance.

Art was an important part of the Dugans’ pandemic experience. They created music together, performing and recording from their New York apartment. The social justice movements energized during the pandemic had an impact on their performance, which opened with Stevie Wonder’s “If It’s Magic.” Peter explained that it’s important to acknowledge Black musicians as composers.

“Black musicians have probably done more for musical innovation in the past hundred years than anyone else, in terms of music writ large,” he said. “And for that reason I think it’s really important to us to include someone like a Stevie Wonder, or a Charlie Parker.”

Every piece on the program has immense meaning to the Dugans. As a member of WQXR’s inaugural Artist Propulsion Lab, Kara Dugan created a song cycle called “In a New York Minute: Miniatures for Voice and Piano.” Dugan explained that this cycle, comprising five one-minute pieces, was made from poetry submitted to the Gothamist by average New Yorkers. These poems were then set to music by five different women composers.

“If you ask somebody to name a dozen women composers, I think some people might have trouble doing that within the classical repertoire,” said Kara Dugan. “It was important to me to highlight the fact that women were not given the same opportunities, and to help uplift other women in the community, and to support each other, and to create together.”

The joy felt by the Dugans on stage was echoed by the audience. For audience member Sarah F. Williams, the concert marked the beginning stages of a return to live music.

“I was very happy to have art back in my life. To be two years without that, it was something so big missing. And you don’t know what it is till you don’t have it,” said Williams.

—Staff writer Lena Tinker can be reached at lena.tinker@thecrimson.com.