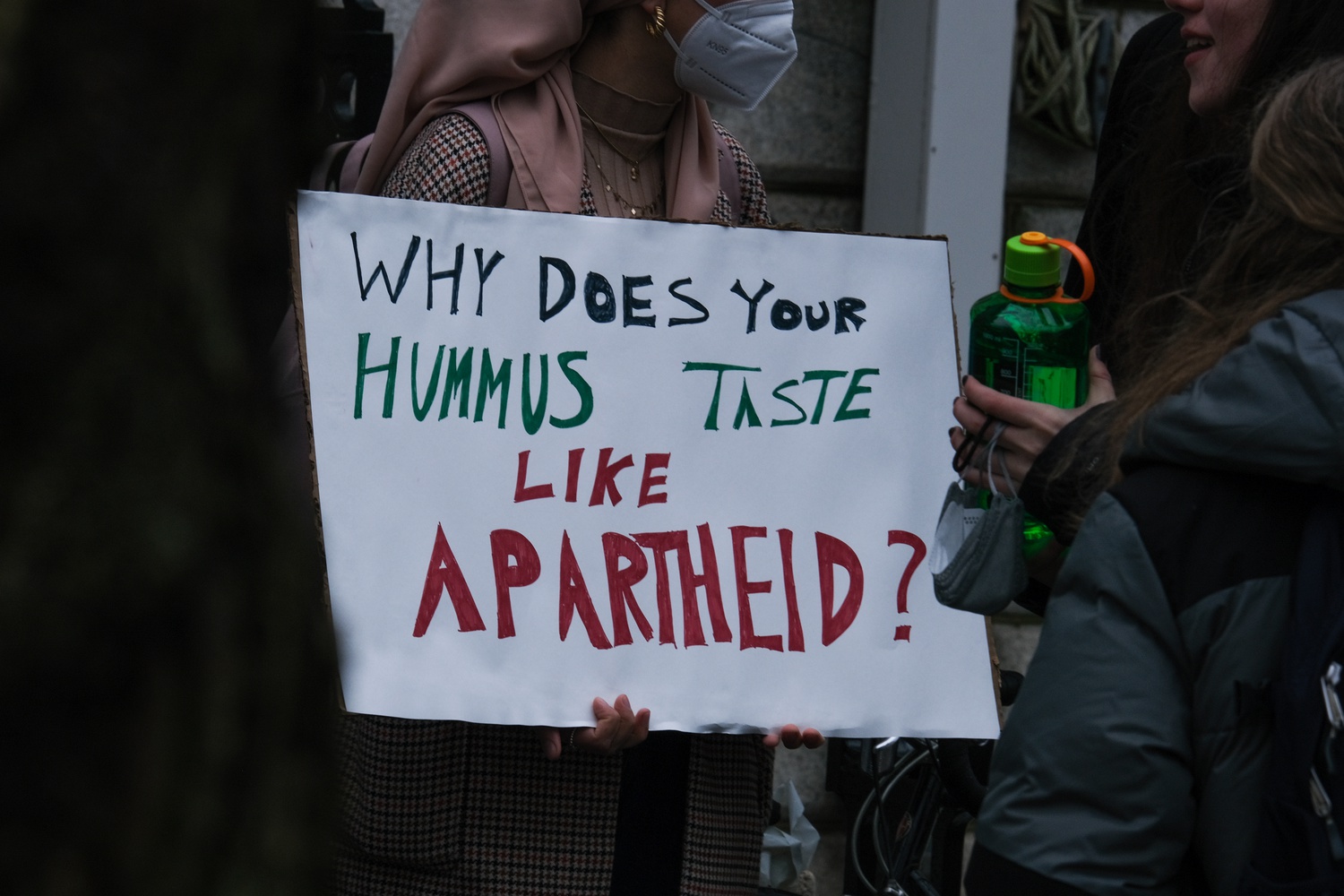 Students gathered in front of Massachusetts Hall Tuesday protest Harvard's use of Sabra products in their dining halls. By J. Sellers Hill
By Ella L. Jones and Monique I. Vobecky, Crimson Staff Writers

Harvard Out of Occupied Palestine held a rally in Harvard Yard Tuesday to call on the University to stop serving Sabra hummus in its dining halls due to the company’s ties to the Israeli Defense Forces.

HOOP is a campaign, spearheaded by the Harvard College Palestine Solidarity Committee, that calls on Harvard to disclose and divest its investments in companies tied to Israel’s presence in Palestine. Israel-based food company Strauss Group — which co-owns Sabra with PepsiCo — has drawn criticism for providing financial support to the Israel Defense Forces’ Golani Brigade.

Joshua D. “Josh” Willcox ’23, a member of HOOP, said the protest’s aim was to spread awareness to students and encourage them to boycott the company.

“We don’t want this company to be in our dining halls,” Willcox said. “This is a general move to not support and not allow any money to go towards companies that involve themselves in an apartheid state.”

“We’re borrowing from the same kind of movement that people tried to do when they wanted to end South African Apartheid,” he explained.

University spokesperson Jason A. Newton did not respond to a request for comment regarding the protest.

Nadine S. Bahour ’22, a HOOP organizer, called on students to rethink the consequences of their day-to-day choices.

“What we can do on an individual basis as students is just making those decisions in our daily lives,” Bahour said. “When students come here for only five, four years, the most basic act that they can take is when they go to Brain Break not to choose an option that funds the Israeli military.”

The Harvard Israel Initiative — a student group that supports “the Jewish nation’s right to exist as a sovereign power in its historic homeland” — posted a statement to its Facebook page Tuesday in response to HOOP’s protest.

“We stand against any attempt to single out the State of Israel and uphold the right of the Golani Brigade — a unit dedicated to combatting terror groups, including Hamas and Hezbollah — to defend Israel from those who wish to annihilate it,” the statement reads. “Choosing to accuse a New York-based hummus company of “murder” is a bad-faith attempt to delegitimize Israel’s right to exist.”

Strauss Group did not respond to a request for comment regarding the protesters’ criticisms.

Willcox said HOOP hopes to expand its outreach on campus through a new initiative called Keffiyeh Thursday, a day in which students don traditional Palestinian scarves.

“I’m really excited about the next couple of weeks because on Thursdays we’re starting a campaign called Keffiyeh Thursdays,” Willcox said. “We’re trying to bring visibility to Palestinians on campus and increase the awareness that people have.”

Willcox said he hopes that HOOP’s efforts will continue to build momentum through regular events.

“We need to make sure that there are events like this every week in the Yard recognizing that this is an active movement and this is something which isn’t going to be quiet,” he said.

—Staff writer Monique I. Vobecky can be reached at monique.vobecky@thecrimson.com.