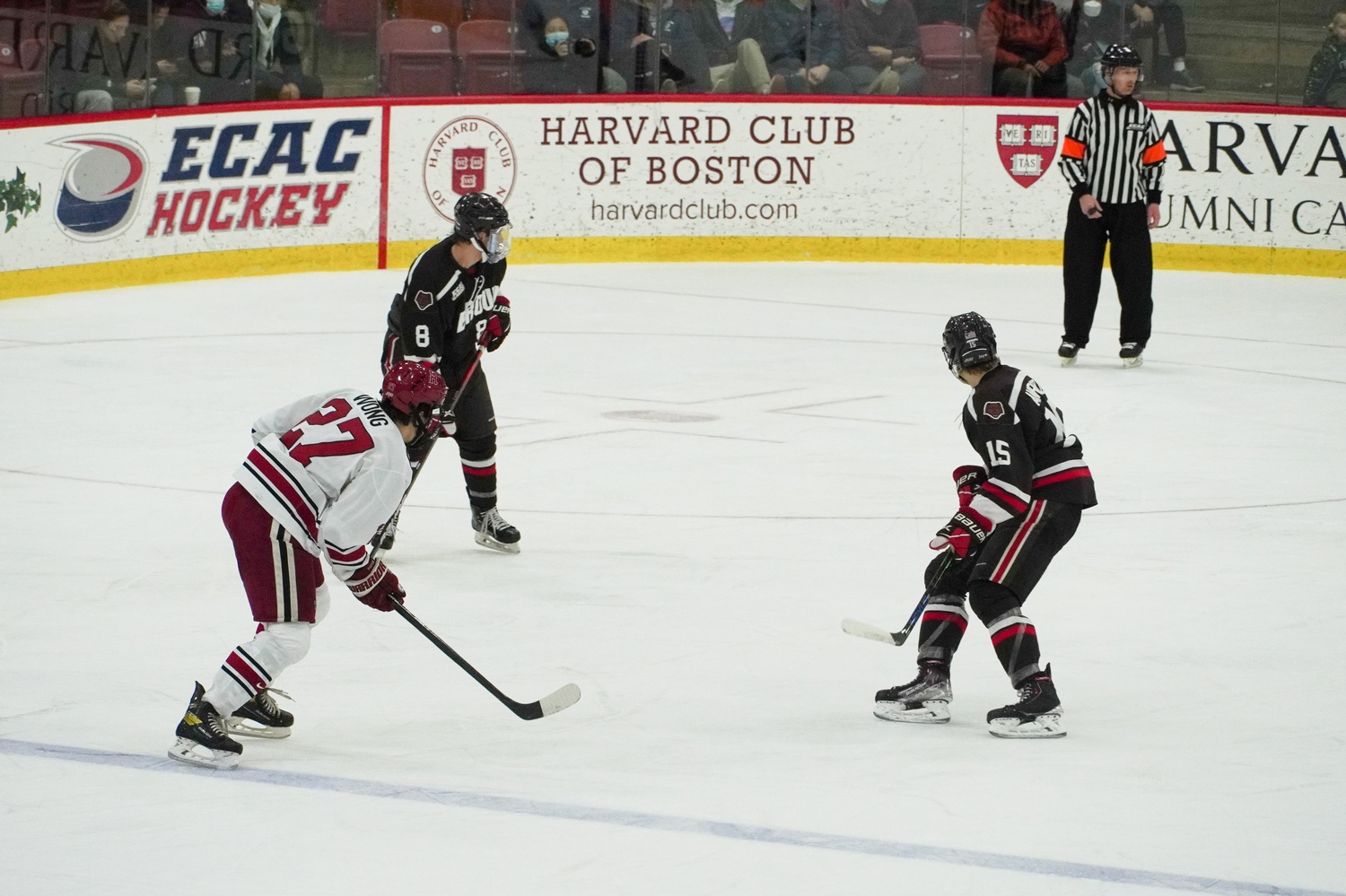 Junior forward Austin Wong sizes up his defender in a 5-2 victory over Brown on Nov. 23. In the victory over Dartmouth, Wong scored an open-net goal in the closing seconds to seal the 3-1 victory. By Josie W. Chen
By Bridget T. Sands, Crimson Staff Writer

The Harvard Men’s Hockey (12-7-2) team was sheltered from Friday’s hail by the Bright-Landry Hockey Center’s roof, as they took on fellow Eastern College Athletic Conference (ECAC) member and Ivy League competitor Dartmouth (3-15-3). The Crimson pulled out the win, 3-1, earning its fourth straight victory.

“It was a good game,” senior forward Jack Donato claimed proudly. “[We] usually throw the records out the window this time of year- they played hard and didn’t make it easy on us…we stuck with it and got what we needed.”

“I thought we did a lot of good things. I give Dartmouth a lot of credit…” head coach Ted Donato added. “[It’s the] time of year where games start to get really tight and competitive and defensive.”

The first period set the tone for a very competitive game. Both teams came out fast, with Harvard dominating the possession initially before the Big Green recalibrated to make the last 15 minutes of the first period a lot more aggressive.

Neither team recorded a score; however, both had power play opportunities. The Crimson’s senior captain and forward Casey Dornbach was charged with interference about 11 minutes in, while first-year forward Austin Wong drew a hooking penalty from Dartmouth’s Braiden Dorfman just past the ten-minute mark.

Harvard came out fast in the second period. Just over two minutes in, Jack Donato scored his third goal of the season, assisted by sophomore defenseman Jack Bar and first-year defenseman Kyle Aucoin. Donato deflected Bar’s slap shot, with the puck finding the net after slipping under the Stevenson’s pad.

About two minutes later, the Crimson had a power play opportunity after a hooking call on Dartmouth’s Sean Koehan. It capitalized on this opportunity, as first-year forward Matthew Coronato finished junior defenseman Ryan Siedem’s initial shot.

Seven minutes, 33 seconds into the period, Harvard’s Aucoin and first-year forward Tommy Lions were both sent to the box, for tripping and slashing, respectively. This gave the Big Green an opportunity at a 5-on-3. Despite Dartmouth not recording any shots on goal in the period before the penalty, Ian Pierce converted on the chance, scoring with just three seconds left in the power play to cut the Crimson’s lead to one.

“I think we can do a little better job staying out of the box,” Ted Donato expressed. “The five-on-three was completely avoidable. We took a retaliatory penalty and that usually does end up biting you.”

The remainder of the period consisted of Harvard controlling the puck, although they were unable to execute on two more power play opportunities. Gibson recorded four more saves.

The third period consisted of tough, competitive hockey. There was only one penalty, as senior Wyllum Deveaux was sent to the box for slashing about three minutes in, but the Crimson were easily able to kill the advantage.

Harvard outshot the Big Green 21-11 in the third; however, it was unable to score until only five seconds remained in the game and Dartmouth had pulled Stevenson from the posts. Junior forward Austin Wong finished the open goal; Jack Donato and junior defenseman Henry Thrun were credited with the assists.

“Get to the front of the net more,” said Jack Donato of his strategy, which has resulted in three points in the last four games. “It's where a lot of the dirty goals are and D [defensemen] are doing a good job of getting pucks to the net.”

The Crimson will take on Boston University, who head coach Ted Donato called “maybe the hottest team in the country right now,” on Feb. 7 in the 69th annual Beanpot Tournament at TD Garden. Puck drop is currently scheduled for 5 p.m. and the game will be televised on NESN+.

-Staff writer Bridget T. Sands can be reached at bridget.sands@thecrimson.com.