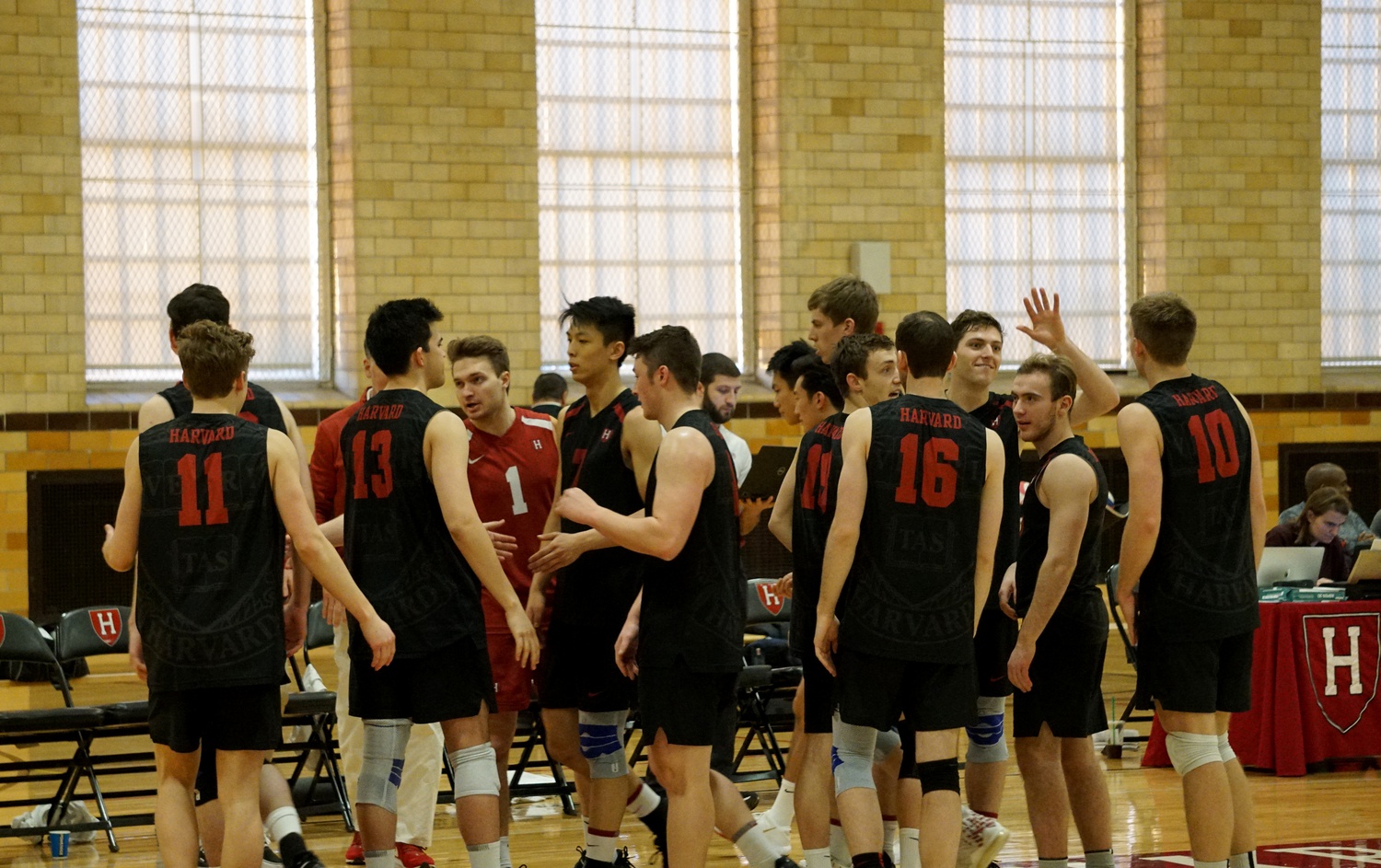 By The Crimson Staff
By Noah Jun

The Harvard men’s volleyball team (2-4) fell to Purdue Fort Wayne (6-4) on Saturday, abruptly ending the team’s two-game win streak at the Malkin Athletic Center. Shouts and cheers from fans and players alike reverberated through the vaulted ceilings of the MAC’s top floor in the first match of the spring semester but ultimately resulted in a Harvard loss.

The Mastodons got off to a strong start in the first set — 6-2 — before the Crimson could stop the damage. Although Harvard managed to dig its way out of this early deficit, subsequent Mastodon runs proved too much to counteract. Although Purdue Fort Wayne took the first set 25-17, the Crimson’s competitive advantages, such as senior outside hitter Eric Li, were quick to warm up despite the team’s two-week hiatus. Li had 11 kills and seven digs overall.

“There’s always a mental and physical aspect to not playing in two weeks,” Li said. “It’s certainly there, though I thought we did a good job to minimize it. It was mainly our own mistakes getting to us in that first set, and [those] are things that, regardless of whether you haven’t played in one month or a few days, you always have to be ready for and be as sharp as you can.”

Service errors plagued both teams, as each side missed 18 serves over the course of the match.

Going into the second set, Harvard looked to pick up its energy and forget its previous mistakes. Nevertheless, the Mastodons continued their momentum by once again taking an early lead of 6-2. Three service errors and a couple kills gave Harvard its second lead of the match at 9-8; the other came at 2-1 in the first set.

“We [settled] in and had a new gear,” Li said. “[It was] the most energy we’ve played with this whole preseason.”

This energy came in the form of attacks from first-year outside and opposite hitters Logan Shepherd and Kade McGovern, who notched 10 and seven kills, respectively. Sophomore middle blocker Ethan McCrary also recorded seven kills. This offense was supported by first-year setter James Bardin, who had a career-high 37 assists on the night and has tallied 177 through his first six collegiate games.

“Coming out of a first set like that, the guys did really well to bounce back in the second,” senior captain Jason Shen said. “We talked a lot about ‘0-0,’ resetting — and the guys came out with energy.”

Shen led the defensive effort on Saturday, digging out 11 balls that otherwise would have been Mastodon kills.

Three-point runs from each team tipped the scales back and forth, but the Crimson managed to pull out two four-point runs, starting at 15-15, to take the second set 25-20.

“We had moments in the second set where we were playing really good volleyball,” Shen said. “We set out for ‘first pass, first set, first swing.’ That’s what we have to do against every team.”

Shen was drawing on lessons he and the rest of his team took from their previous five matches of the season, which began on Jan. 12. Harvard took the court for the first time in 683 days, replacing the frigid, snow-filled streets of Cambridge with sunny California to begin its season with three top-15 matchups.

The Crimson started its Golden State campaign at No. 15 UC Irvine (3-5), playing three competitive sets but falling to the Anteaters 25-19, 25-22, and 25-21. Harvard’s persistence was spearheaded by the team’s younger players, as sophomore blocker Ethan Smith and McGovern posted nine and eight kills, respectively. Bardin led the team with 26 assists in his first collegiate match. The team matched UC Irvine at 33 kills but fell short in aces and blocks, thus paving the way for the Anteaters to go on runs in otherwise deadlocked sets.

The team made its way down the coast to La Jolla to play No. 10 UC San Diego (3-3). The Crimson drew first blood, stunning the Tritons to win its first set of the season, 25-16. Senior outside hitter Campbell Schoenfeld and Li contributed 11 and seven kills, respectively, and McGovern continued his stellar start to collegiate volleyball with 11 more kills. Despite the early success, Harvard lost the next three sets 25-16, 25-20, and 25-23. In the loss, however, Bardin racked up 34 more assists, and Shen fulfilled his libero duties with a strong defensive performance of 12 digs. Shen’s contribution led the Crimson to out-dig UC San Diego 42 to 40, but Triton senior outside hitter Kyle McCauley and middle blocker Logan Clark each posted double-digit kills to give the Californians the edge in the last three sets.

Rounding out its west coast tour, Harvard went up against fifth-ranked Long Beach State (5-1), but the Sharks proved too much, running away with the match 25-18, 25-16, and 25-23. Schoenfeld was the only Crimson player to reach double-digit kills, and Bardin posted 20 more assists. Despite trading points early in each set, Harvard could not stop the onslaught from Long Beach hitters like Clarke Godbold and Spencer Olivier. The team would have to wait for its first win of the season on the east coast.

“Coming out of the west coast tour, it was great because we played a lot of really good teams and knew we could play at that high level of competition,” Shen said. “It showed us we can hold up against big dogs.”

The Crimson would not have to wait long for its first victory of the season, however, as it handily won the first two matches it played at the MAC. In its home debut, the team faced off against Queens University of Charlotte (4-3) and King University (1-6). Harvard easily defeated Queens, 25-20, 25-14, and 25-19 in its first match at home in 699 days and kept the momentum going against King, walloping the Tornado 25-16, 25-19, and 25-16. In all six sets, the Crimson came out firing, gaining early leads and never looking back. Schoenfeld tallied 22 kills over the weekend, many of which were assisted by Bardin, who had 30 assists in both games.

“Despite coming back and our conference maybe not being the same caliber as those West Coast teams, there are still good teams — teams that have beat West Coast teams,” Li said. “We have to take forward the mentality that we’re winning this conference because we can beat anyone.”

Returning to Saturday’s game against the Mastodons, a contest leveled at a set apiece, both teams fought hard to gain the advantage in the third. This task would prove difficult, as neither team had more than a one-point edge over the other until Harvard took a 12-10 lead. The Crimson opened the gap to 19-15 before Purdue Fort Wayne took a crucial timeout, stopping the slide. Harvard fought to gain a 24-22 advantage and two set points, but attack errrors from Li and Smith gave the Mastodons four straight points and the third set, 26-24.

The fourth set saw the Crimson reeling from the disappointing end to the previous one, with Purdue Fort Worth taking an early lead that soon faded at 14-14 as the home team recovered. Mastodon runs once again opened the gap, but this time Harvard did not have the chance to redeem itself, as the match ended with the Mastodons taking the fourth set, 25-20.

“I’m proud of the fact that we were able to battle in a bunch of big rallies that ended our way, but [there were also] a bunch of others that didn’t go our way,” Li said. We have to figure out how to convert those in the future.”

The loss to Purdue Fort Wayne marks a disappointing end to the Crimson’s preseason. The team begins its conference campaign at home next Friday against No. 5 Penn State (7-3, 2-0 EIVA). Despite this defeat, the senior leaders of the team remain optimistic moving forward.

“If we execute what we know how to do, we’ll be able to take [Penn State] down,” Shen said. “I’m excited to see our guys play to their potential on the court in match time, especially in the big moments. That’s going to let everyone have a lot of fun and win the matches we know we can win.”

“Throughout the preseason, the team was able to spend so much time with each other, on and off the court,” Li said. “That’s definitely going to continue as we go through the season, and that’s something I’m really excited about.”

Li also noted the growing pains of meshing a team of veterans like Shen and himself, who had not seen college play since 2020, with rookies such as Bardin, McGovern, and Shepherd, who had never donned Crimson uniforms until this year. The preseason was an opportunity to develop the trust and chemistry that is necessary for the team’s success.

“As we play more, as we see more of each other on the court, that trust is going to continue to build,” Li said. “I think that what’s going to take us the furthest is that we trust in our abilities, we trust in what we train and practice, and that’ll show through in the games.”