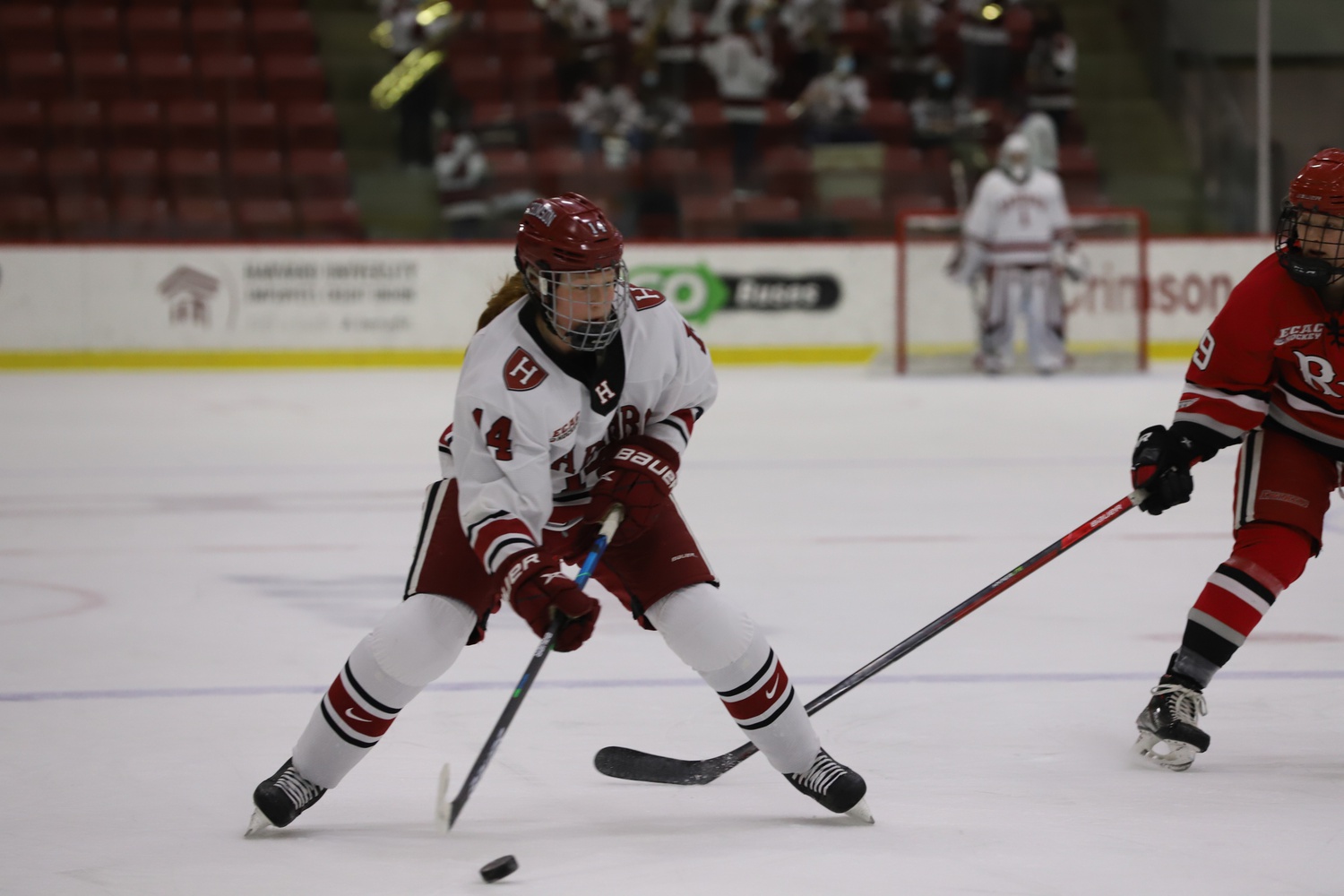 Senior forward Dominique Petrie sizes up her defender in a 4-3 victory over RPI on Dec. 4. This weekend, the Crimson added another victory over the Engineers, this time winning 4-1 in Troy on Friday. By Angela Dela Cruz
By Christopher D. Wright, Crimson Staff Writer

The No. 6/6 Harvard women’s hockey team has already raked in hardware this season, including the Ivy League championship and Beanpot title, but it entered its two final games hoping to add another to the trophy room — the ECAC regular season championship.

However, it would need a little bit of help. Since No. 7/7 Yale (22-6-1, 16-5-1 ECAC) was two points ahead of the Crimson, Harvard would need to win out and hope that Yale would falter against one of its last two opponents. After defeating Rensselaer Polytechnic Institute (9-23, 5-17 ECAC), 4-1 on Friday, the Crimson got what they needed, as the Bulldogs fell to Quinnipiac 4-1. As Harvard prepared for a Feb. 19 battle at Union, it knew that a victory would guarantee it the ECAC title. For the Crimson, it marked the culmination of a two-year journey after the 2020-21 season was canceled due to the Covid-19 pandemic.

“The year off has been a factor in not taking any game for granted,” senior forward Becca Gilmore said. “It is something that is in our hearts everytime we step on the ice.”

Harvard would go on to claim a 3-0 win over the Dutchwomen (5-28-1, 2-20 ECAC), capturing the eighth ECAC regular season title in school history and the first since 2015.

Entering the weekend slate, the Crimson had played seven games within the span of 14 days. Although this span included the Beanpot title, it ended with a loss to No. 9/9 Quinnipiac (23-8-3, 15-7 ECAC) and a tie with St. Lawrence (14-13-7, 10-8-4 ECAC). Due to this, Harvard head coach Katey Stone emphasized mixing on-ice results with off-ice recovery while preparing for the road trip to Upstate New York.

“We played a ton of hockey games in a two-and-a-half week stretch, so making sure we got the proper amount of rest to fill our tanks again was the focus,” she said.

Knowing that a win would guarantee it the ECAC regular season crown, the Crimson traveled to Schenectady, N.Y., to do battle with Union.

“You don't have to say too much in those situations. Our kids know what’s at stake and what they’re playing for,” Stone said.

Harvard would not be able to jump out to an early lead, as Dutchwomen goalie Sophie Matsoukas blocked every shot to amass 17 first period saves. Union would also fail to generate offense despite a first period power play chance.

Twelve minutes into the second, junior forward Kristin Della Rovere broke the tie with a power play goal that was assisted on by first-year forward Taze Thompson and junior defender Kyra Willoughby. However, this would be the only goal the Crimson would score in the second period, failing to convert on a power play shortly before intermission.

Ultimately, Harvard’s title chase would not be denied, as it found its championship-winning goal with five minutes left in the third, when senior defender Emma Buckles found the back of the cage following passes from Hyland and senior forward Dominique Petrie. After assisting on the previous goal, Petrie salted the game away with an empty net goal in the final seconds.

In the first game of the road trip, the Crimson traveled to Troy, N.Y. to take on RPI. In her first game back after a three-game absence, sophomore forward Shannon Hollands scored the opening goal. The goal came six minutes into the game, as a near-post wrist shot slipped past Engineers goalie Amanda Rampado. Later in the first period, Harvard got another opportunity to score, as RPI’s Delaney Weiss was assessed two minutes for hooking. The Crimson seized the opportunity, as Gilmore found the back of the net only a few seconds into the power play.

One minute into the second period, Harvard went on the power play again when the Engineers’ Riena Jahnke was called for a two-minute minor penalty. This time, the Crimson failed to convert, as shots by junior forward Anne Bloomer and Willoughby were all saved by Rampado. Harvard was not to be denied for long, though; halfway through the period, sophomore forward Courtney Hyland extended the lead to three off of a nice dish by Thompson. Later in the second, after RPI was given two minutes for roughing, the Crimson scored their second power-play goal of the night, as Thompson netted her eighth goal of the season.

Although the Engineers entered the game with an ECAC-best 91.3% penalty kill rate, Harvard managed to add two power play goals to its total, its 26th and 27th, good for fourth-best in the NCAA.

“The difference was our shot selection and our net front presence screening the goaltender, '' Stone said.

Asia Taylor-Walters got RPI on the board early in the third. However, the goal would not be enough to spark a comeback, as Harvard held on for the 4-1 victory.

The Crimson will return to action on Feb. 22 in the ECAC quarterfinals. They will play host to the Princeton Tigers (11-13-5, 9-10-3 ECAC) at Bright-Landry Hockey Center. The game is the first of a best-of-three series to determine who advances to the ECAC semifinals.