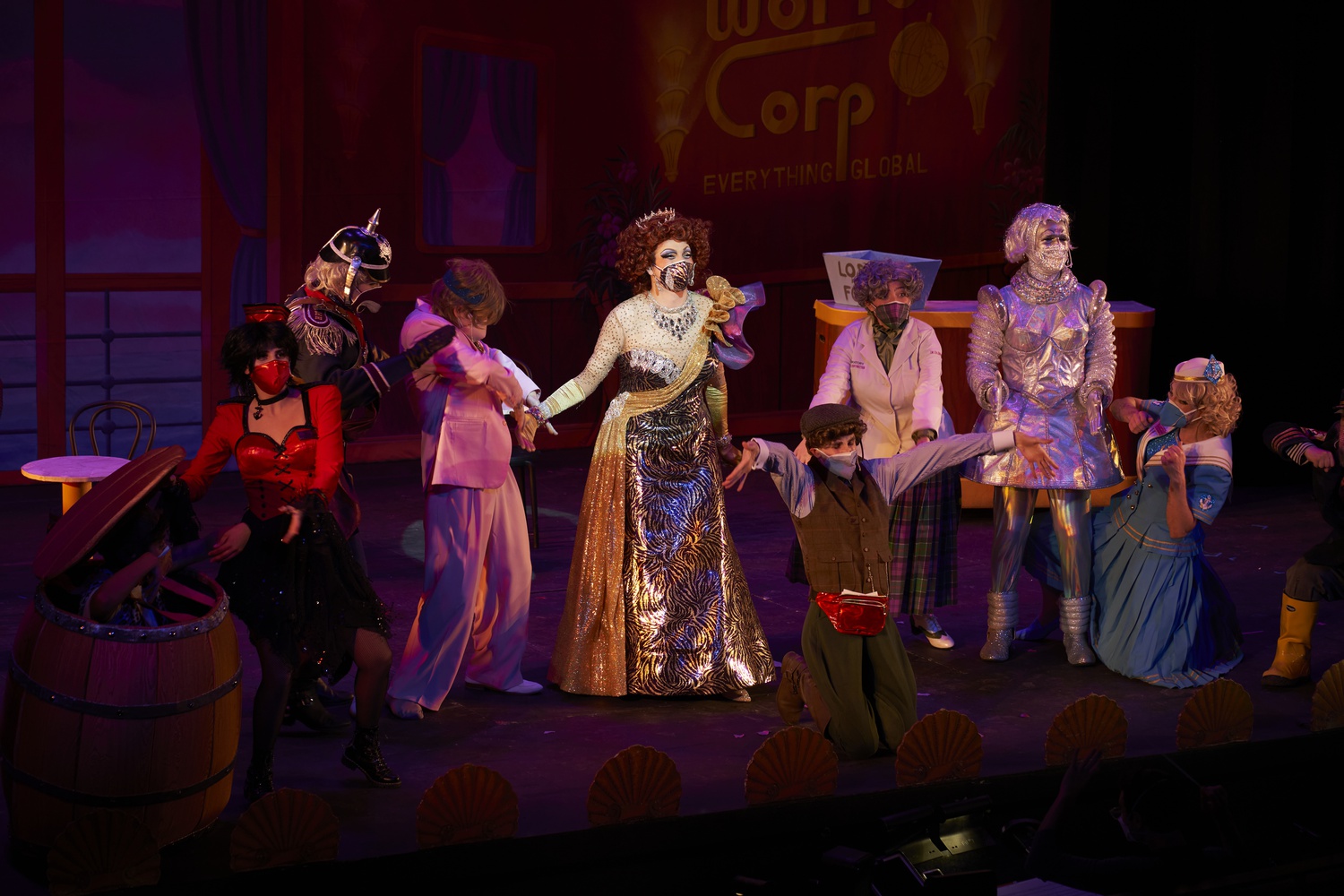 Four misfits walk onto a luxury yacht and what follows is two hours filled with eccentric characters, clever jokes, and some good old-fashioned petty drama.

“Ship Happens,” staged by Hasty Pudding Theatricals and directed by Larry Sousa, runs from Feb. 6 to March 6 and follows Millie Onstospend, the wealthy CEO of World Corp on her quest to pick her successor as she moves on with her life to run to be the Queen of England. The candidates vying for CEO? The vengeful inventor of a remote-controlled iceberg, Greenland’s ex-dictator, a self-absorbed male model, and a luggage attendant pretending to be a world famous adventurer with some personal assistants (both robot and human), and a stowaway thrown into the mix. The characters of “Ship Happens” may at first seem like little more than caricatures that get some good laughs in along the way. But upon closer look, their self-discovery and personal growth draw the audience into the light-hearted and well-produced play.

The plot can be a little hard to follow at times due to the musical nature of the production and because there are so many moving pieces and characters to keep track of. Some parts of the performance can seem random, such as a plotline that revolves around sneezing or a segment at the end of the show where the ensemble launches into a highly-choreographed, several-minute-long kickline that screams 1980s, featuring brightly-colored and perfectly-coordinated costumes.

But the chaos that characterizes “Ship Happens” is good-natured. This spontaneity and eccentricity simply add to the joy the show brings. And once the viewer becomes more familiar with the ensemble cast, it is easy to become quickly invested in the show and root for its protagonists.

A major strength of the play is that it engages with the audience through distinctly Harvard-specific references throughout its runtime. Some lines such as the mention of the Tasty Burger bus crash (“If I were you, I’d become Tasty Burger and get hit by a bus.”) or dialogue poking fun at The Crimson (“Inspiration can come from the meekest, smallest, dingiest places, just look at The Harvard Crimson.”), are particularly relevant.

“Ship Happens” further extends this interaction by having dialogue directly pointed at audience members or drawing attention to moments that would otherwise be ignored. At one point, for example, the characters marvel at the closing of the curtain. At another moment, a member of the Hasty Pudding Band stands up to further the show’s commentary on the “Level 5 Stink” that the band exudes and jokingly asks the audience to keep young children away.

The show pays great attention to detail. Each character’s first and last name form a pun that connects to their storyline — for example, “Lotta Baggage” or “Ida Zervbetter” — striking a balance between cute and cheesy. The costume directors do a fabulous job of working within Covid-19 limitations, using matching masks, some even featuring add-ons like mustaches, as an entertaining addition to the costume.

The unconventional nature of the characters adds value to the production on a narrative level. Through this all, the show pays particular attention to Lotta's struggle with her conflicting identities, and the backlash from others on the yacht. As the story progresses, she grows more confident as she stops hiding her real self and striving to live up to someone else’s ideal.

Beneath the showy costumes, lines that are both heartwarming and corny, and well-timed jokes about Harvard, “Ship Happens” portrays a nuanced story about the power of embracing who you truly are without letting the world’s opinion interfere.