Women's Lacrosse To Return to Action Sunday after 715-Day Hiatus 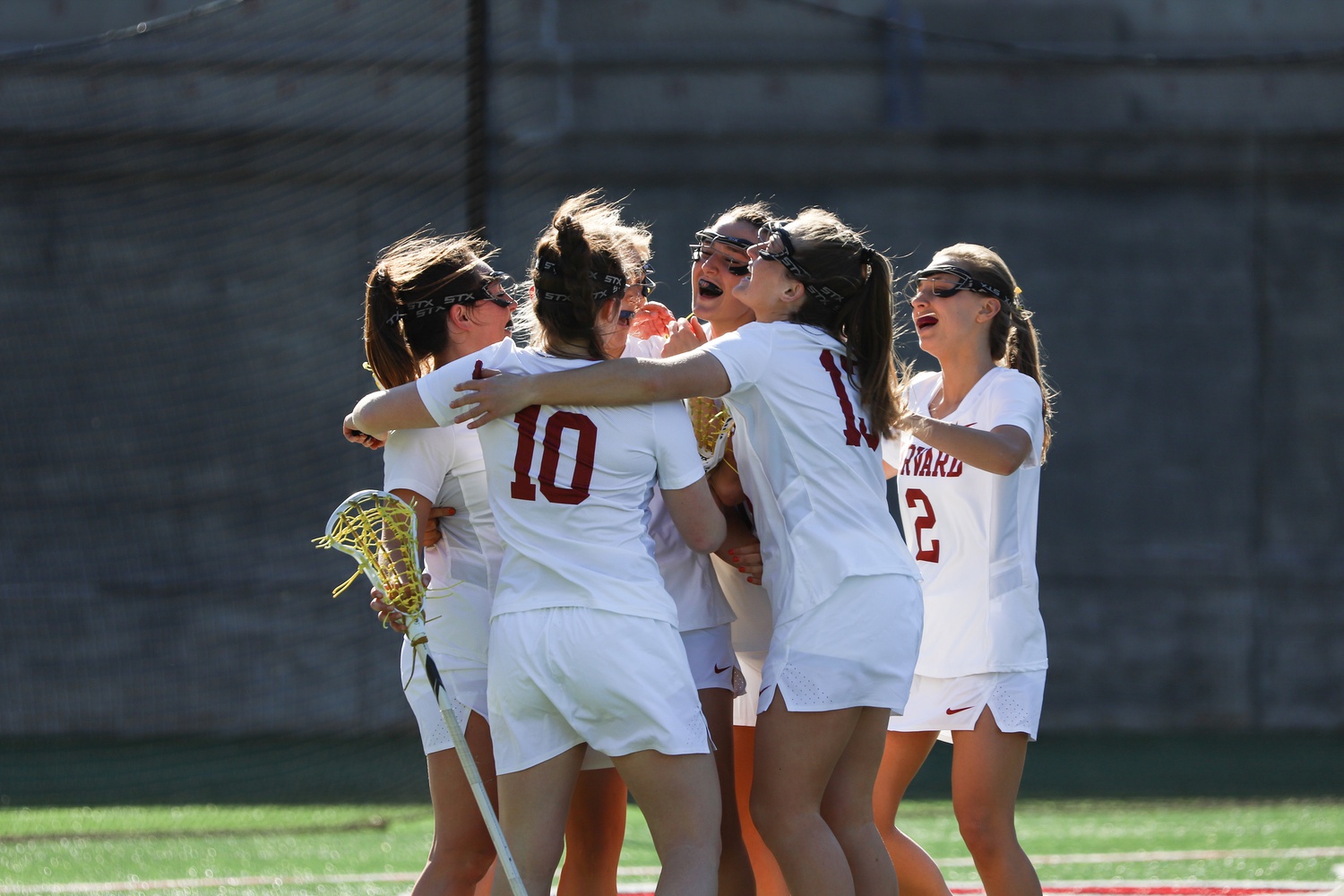 Women's lacrosse celebrates during a game in the 2019 season. It will kick off its 2022 season on Sunday against Colorado. By Quinn G. Perini
By Ben Morris, Crimson Staff Writer

As the cold weather slowly (but surely) starts to subside, the melting snow and ice not only mark the early signs of spring, but also the long-awaited return of the women’s lacrosse team to Jordan Field. The Crimson takes the field against the Colorado Buffaloes this Sunday, Feb. 20, and when it does, it will compete in its first official match in 715 days.

Before the onset of Covid-19, Harvard began the 2020 season with a 3-3 record and was on a winning streak just before Ivy League play was set to kick off. In the nearly two years that have passed since the early shutdown of the 2020 season and subsequent cancellation of the 2021 season, the Crimson has undergone some significant changes.

Most notably, of the 33 active players on the team, only 14 were members the last time Harvard played an official game. The 14 players are composed of five seniors and nine juniors, only three of whom–junior midfielder Shea Jenkins, junior midfielder Grace Hulslander, and senior defender Olivia Gill –started in all six of the games in 2020. In addition to the returning trio, senior attacker Charlotte Clark, who was tied for most points on the team through six games in 2020, with 16 (eight goals and eight assists), also looks to lead the way for Harvard this year. Hulslander and Gill will serve as the team captains for the 2022 season.

While those returning will certainly have to lean on their previous experience, there are plenty of new faces who also look to make their mark and help contribute to the team’s success.

Although Feb. 20 marks a return for the Crimson, the Buffaloes will have played more recently. Colorado was ranked No. 18 in the country the last time it hosted Harvard, two years ago, when the Crimson suffered a close 9-7 defeat. However, unlike Harvard, the Buffaloes came back for a season in the spring of 2021 and finished the year 8-7, including a memorable win over local foe, No. 14 Denver.

Even this season, the Pac-12 opponent has more experience than the Crimson. In its season opener, the Buffaloes came away from their matchup against Louisville with a thrilling 14-13 overtime win. Yet, with fresh legs and an itch to get back on the field after a long time away, Harvard will be playing with plenty of motivation on Sunday.

Following its game against Colorado, the Crimson will continue a three-game homestand, its longest until the final three games of the regular season, with contests against Holy Cross (Feb. 22) and Georgetown (Feb. 26). While this stretch of three games in seven days will be a tough test to start the year for Harvard, and a good measuring stick of where the squad stands after two years away, the team will be rewarded with a full week of rest right after.

On March 5, the Crimson hit the road for the first time and will travel to Philadelphia to take on Penn, its first Ivy League opponent of the year. Harvard has not taken on the Quakers–currently ranked No. 30 in the country–since 2019, but a win in the City of Brotherly Love could set the tone for the season and send a message to the rest of the Ivy League.

The season only heats up from there, as on March 11, the Crimson return home to take on the MAAC’s No. 20 Siena. Three days later, Harvard travels to Jacksonville, Fl., to take on another MAAC opponent, Monmouth. Finally, in its last game before Ivy League play picks up, the Crimson will cap off its trip to Florida when the team takes on its (currently) highest-ranked non-Ivy opponent, No. 16 Jacksonville.

The squad makes its return to Jordan Field on March 26 to face Cornell, its first home Ivy opponent. Coincidentally, Cornell is also the last Ivy League foe that the Crimson took on in 2020 before the season shutdown. Given that intense 9-8 loss to the Big Red, Harvard is likely to come out seeking revenge.

Following games against Dartmouth and at Yale, Harvard faces a local opponent and powerhouse in the ACC’s No. 2 Boston College, which has historically been a lacrosse juggernaut. Finally, to wrap up the regular season, Harvard will host Princeton, the three-time defending Ivy League Tournament champions,Boston University (April 26), and, finally,Brown on April 30.

This year, although a location has yet to be selected, the Ivy League Tournament will take place on May 6 and 8, and, should the team perform well enough, it will have the opportunity to travel to Baltimore, Md., to compete in the NCAA Division I Women’s Lacrosse Tournament on May 27 and 29.

-Staff writer Ben Morris can be reached at benjamin.morris@thecrimson.com.