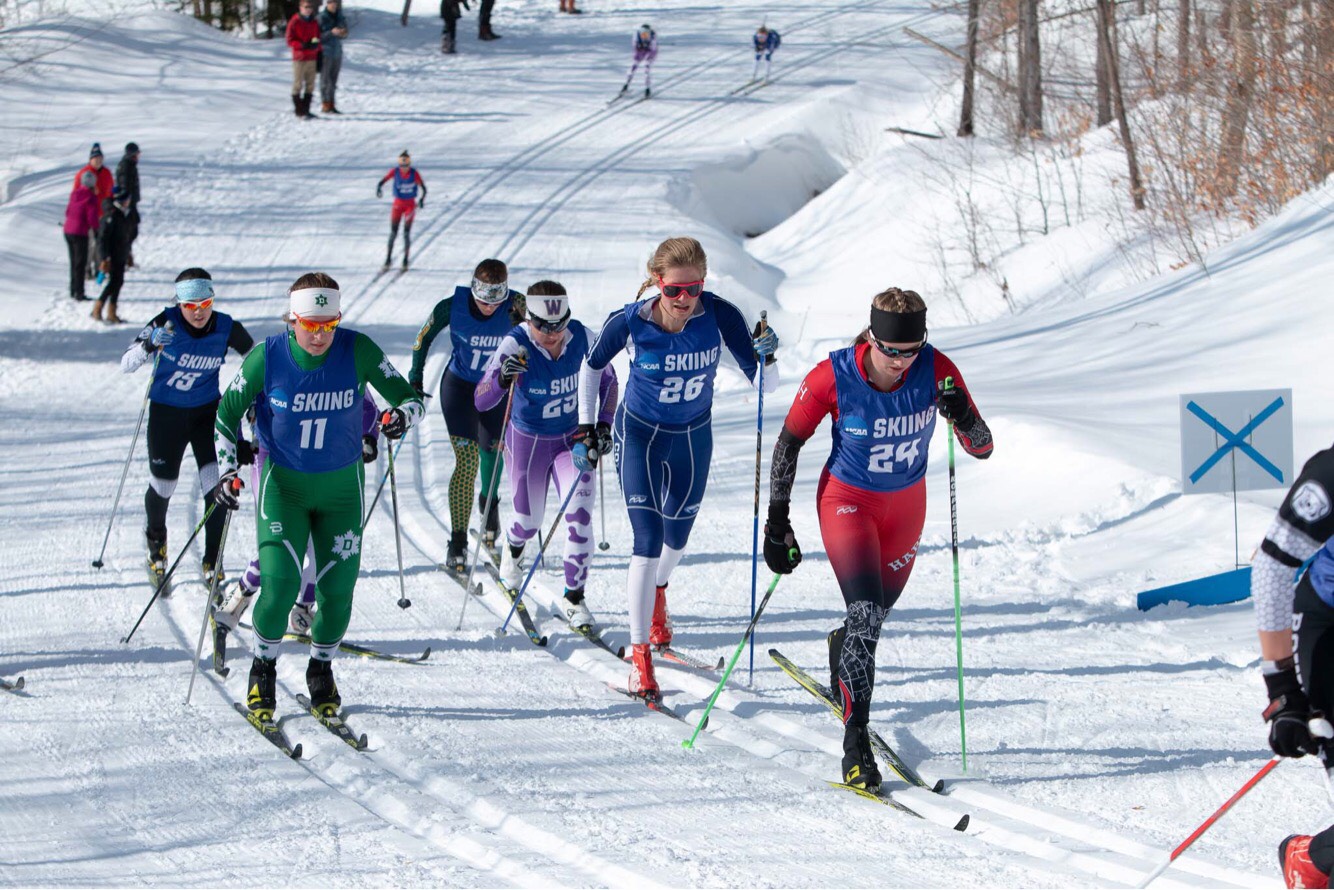 Harvard skiing in competition. By Courtesy of Lily Koffman
By Maddie B. Barkate and Mimi S. Koenig, Crimson Staff Writers

Sophomore standout Rémi Drolet is representing Harvard well at the Beijing Olympics. The Nordic skier has competed in three events for his native Canada, finishing 33rd in the men’s 15km classic, 57th in the men’s skiathlon, and helping Canada to an 11th place finish in the men’s 4x10km relay.

Drolet’s Olympics have been a great learning experience for him. Although some of his results were not what he was hoping for, he is excited to compete in the upcoming 50km race on Feb. 19. Drolet also hopes to better his results in the 2026 Winter Games in Cortina d’Ampezzo, Italy.

“Yeah, that’d be the goal,” said Drolet about representing Canada in 2026. “In cross country skiing, … the peak age is pretty late. Even late 20s, into early 30s, is when skiers are at their best, so if I really want to go for, I guess, really good performances [and]...be really competitive, I’d have to go for one or two more Olympics.”

Drolet is only the third skier to represent the Crimson at the Olympics,the first since 1984, and the first Canadian. Hailing from Rossland, B.C., Drolet made an immediate impact for the Crimson, being named the Eastern Intercollegiate Ski Association’s Nordic Rookie of the Year in 2019-20, as well as being placed on the United States Collegiate Ski and Snowboard Association’s All-Academic Team. In addition to his accolades, he also became the first Harvard male Nordic skier to win a race since the 1972-73 season with his victory in the 20km at the Bates Carnival.

Drolet’s interest in skiing started at a young age. Growing up in a resort town, he was consistently exposed to winter sports. Although he cross-country skied a bit with his parents when he was younger, his main competitive sport was hockey. But around the age of 11, Drolet decided to focus on cross-country.

“[I] wasn’t really enjoying [hockey] anymore…and I was kind of looking for a new sport,” he said. “I did some cross-country skiing lessons with my elementary school, and the instructor from that recommended I join the ski team. So I tried it and I really, really loved it.”

He was able to find success quickly on the youth circuit. Before Harvard, he was a three-time gold medal winner at the Canada Winter Games and a top-10 finisher at the 2019 FIS Junior World Ski Championships.

A Physics concentrator, Drolet chose Harvard primarily for the academic challenge. Out of high school, he focused on only schools in the United States, aiming to find something else to do once his skiing career was over.

“I knew I wanted to go to school, because just having a ski career with nothing else on the side is hard for some people and once you’re done with your skiing career you need to do something with your life,” Drolet said. “I wanted to go to a school where I knew I could be challenged and I was excited about. I visited a couple schools and my favorite one was Harvard.”

Although he originally matriculated as a member of the Class of 2023, Drolet said the decision to take the 2021-22 school year off was an easy one. While the Covid-19 pandemic did not play much of a factor in his decision, qualification for the Olympics would have been difficult to balance along with a demanding training schedule and a full course load of classes. Skiers were able to qualify for the Canadian team from the World Cup circuit, which Drolet was unable to go to. As a result, the Canadian Olympic Committee’s quota for men’s skiing, three, was filled up. However, due to reallocation, the process by which some unused Olympic spots for skiers are “reallocated” to other countries who will use them for additional athletes, Drolet was able to compete to earn the final spot on the Canadian team.

Drolet has good memories of his first-year fall in 2019. Although he found it difficult to juggle skiing and his course load, after his first semester, he was able to better manage his time.

“I really enjoyed it and made lots of friends that I'm really happy about,” Drolet said. ”The skiing team at Harvard is really great. It’s a really supportive environment that really helped me to succeed in every way possible.”

Drolet hopes that, because of slightly increased rest and recovery as compared to the fall, he will be able to recover from the intense training and make one last push for Canada in these Olympics. Devoted Harvard skiing fans can watch him go for gold in his final event, the men’s 50km, this Saturday, February 19th at 1 a.m.

-Staff writer Maddie B. Barkate can be reached at madison.barkate@thecrimson.com.

-Staff writer Mimi S. Koenig can be reached at miriam.koenig@thecrimson.com.