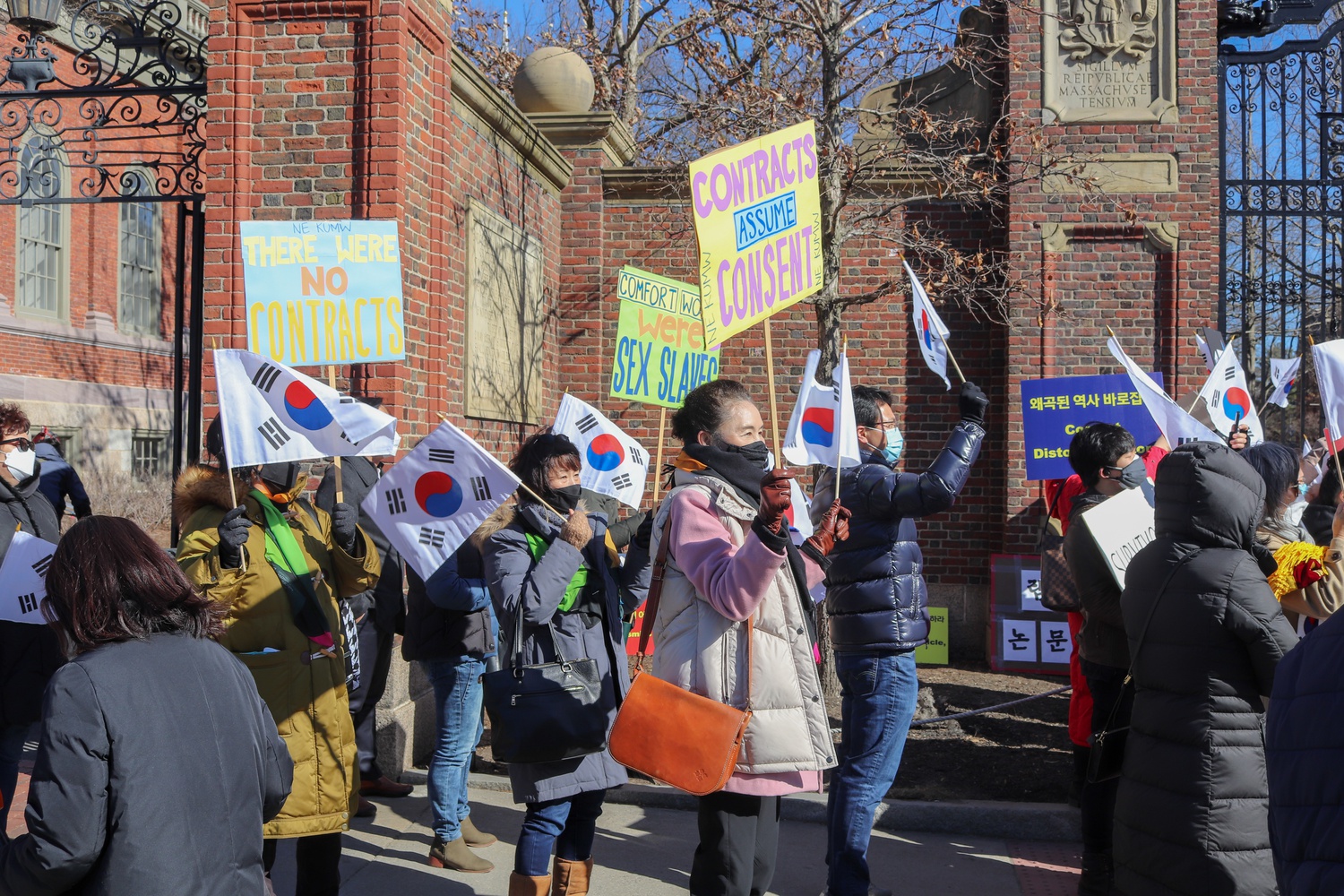 But some scholars and activists say the new paper, published by a Harvard Law School center, fails to adequately respond to criticism of his original piece, which drew intense international scrutiny last year.

Ramseyer’s original paper disputed the historical consensus that “comfort women” — a term referring to women and girls forced into sex slavery by the Imperial Japanese Army before and during World War II — were compelled into sex work against their will. The article, titled “Contracting for Sex in the Pacific War,” garnered international attention after the abstract was re-printed in January 2021 by the conservative Japanese newspaper Sankei Shimbun.

The article was published online by the International Review of Law and Economics, but the March 2021 issue of the journal — to which it was assigned — has not yet been printed. The journal’s website lists the issue as “in progress.”

Both Ramseyer and his critics say their arguments are mischaracterized by the other.

In his response, published as part of a faculty discussion series by the Law School’s John M. Olin Center, Ramseyer contended that his critics ignored the “actual topic” of his original paper.

“My article is exclusively -- exclusively -- descriptive,” he wrote. “Making moral judgments is fine -- but we as scholars need to try to understand why real-world men and women entered into the contracts that they did. Evaluating the moral character of those contracts is decidedly beyond the scope of my inquiry.”

Some historical and legal scholars, though, rejected Ramseyer’s response. They argued that he deflected many of the criticisms they levied against him and mischaracterized their original critiques.

Harvard History professor Andrew D. Gordon ’74 and Korean History professor Carter J. Eckert — whose response to Ramseyer’s original article was the primary focus of the rebuttal he published last month — wrote in a statement that Ramseyer’s response is a “classic example of misdirection.”

“It accuses us of claims we did not make, repeats unfounded claims of his own, and fails to rebut the central points of our February 2021 statement,” they wrote in a Jan. 25 statement published on Harvard DASH.

Ramseyer grouped criticism of his paper into three broad points: first, that comfort women did not work under contracts; second, that the Japanese military “dragooned” Korean women to force them into work as comfort women; and third, that comfort women were sometimes deceived by recruiters or mistreated by the brothel owners.

But Gordon and Eckert said their original critique never mentioned the “gun point dragooning” of Korean women, calling Ramseyer’s “lengthy discussion” of the issue a “red herring.” Their criticism was actually founded on the “powerful evidence of deception in the recruitment of comfort women,” they wrote.

They added that Ramseyer cites contracts aimed at Japanese women as evidence for claims about contracts with Korean comfort women.

“I never claim that I have a cache of actual contracts; rather, I use historical evidence about the contracts,” Ramseyer wrote in his rebuttal. “In the [original] article, I make excruciatingly clear the limit of the information I have. No one could actually read beyond the customary summary language in the ‘abstract’ to the article and imagine that I had a dataset of signed contracts.”

Gordon and Eckert questioned whether he made clear in his original article that he has not seen actual contracts with Korean comfort women.

“We invite interested readers to decide for themselves if in that article he makes it clear that he has read neither actual nor sample contracts,” they wrote.

Northwestern University History professor Amy B. Stanley ’99 and four other professors from universities around the world who had penned a response to Ramseyer’s original paper also voiced concerns with his rebuttal in a Jan. 10 statement.

“His response contains many of the same problems of distortion and misdirection that characterized his earlier work,” they wrote. “Ramseyer seeks to deflect from our criticisms by imputing to us a position that we have not taken, and by implying that we rely on discredited sources to which we have never referred.”

Comfort Women Action for Redress and Education, an organization dedicated to advocacy and education about “comfort women,” condemned Ramseyer’s new paper, writing in a statement that it “reproduces the same flawed methodology” as his initial article.

The CARE statement said he neglected “basic legal principles” in his inquiry by not considering whether arrangements made with the comfort women violated international law.

In his response paper, Ramseyer criticized other scholars for taking issue with his work outside of the confines of academic journals. He wrote that critics violated “long-established academic norms” by calling on the journal to retract his article instead of responding in an academic setting.

“The proper scholarly response is to write a critique (as Lee, Saito & Todres 2021 did) and publish it in a peer-reviewed journal,” Ramseyer wrote.

Gordon, however, said calls for retraction fall within his understanding of academic activity.

“All journals have procedures to entertain such calls,” he wrote in an email.

But Y.S. Lee, who Ramseyer praised as authoring a “proper scholarly response,” also rejected the notion that academics should only respond in the pages of journals.

“For those scholars who do not have a proper venue to publish a rebuttal, I think it’s an acceptable response,” said Lee, a law professor at Georgia State University.

He also said that Ramseyer neglected to engage with the substance of his criticisms, and published a second response in another law journal.

Harvard Law School professor Jeannie Suk Gersen, who penned an article in the New Yorker last year responding to the controversy, said that scholars have a responsibility to find and correct errors of their colleagues.

“A peer-reviewed legal journal in this case was not equipped to catch the errors regarding Japanese-language sources that the historians of Japan have found and that led those historians to believe there was a problem of academic integrity here,” she wrote. “It is the job of the scholarly community to examine and respond to other scholars’ research, and of a scholar to admit research errors when they are brought to light, whether in a peer-reviewed journal or otherwise.”

Ramseyer wrote that the backlash to his work has amounted to a restriction of his academic freedom.

“To understand the reaction to my article, readers need to realize the extraordinary extent to which the South Korean government restricts discussion of the issue,” he wrote.

Joseph E. Yi, a professor at Hanyang University in Seoul, South Korea, wrote in an email that scholars who question the historical consensus on comfort women in Korea are often harassed online, punished by their institutions, and prosecuted in courts.

Lee, the Georgia State University law professor, said academics that publish objections to victims’ stories could be charged for defamation by law in Korea.

“Defamation is a criminal charge in both Japan and Korea,” he said. “Some comfort women, the victims, are still alive. So if you undermine their reputation, if you call the victim who was forced to engage in a sexual act a voluntary prostitute, that is defamation.” 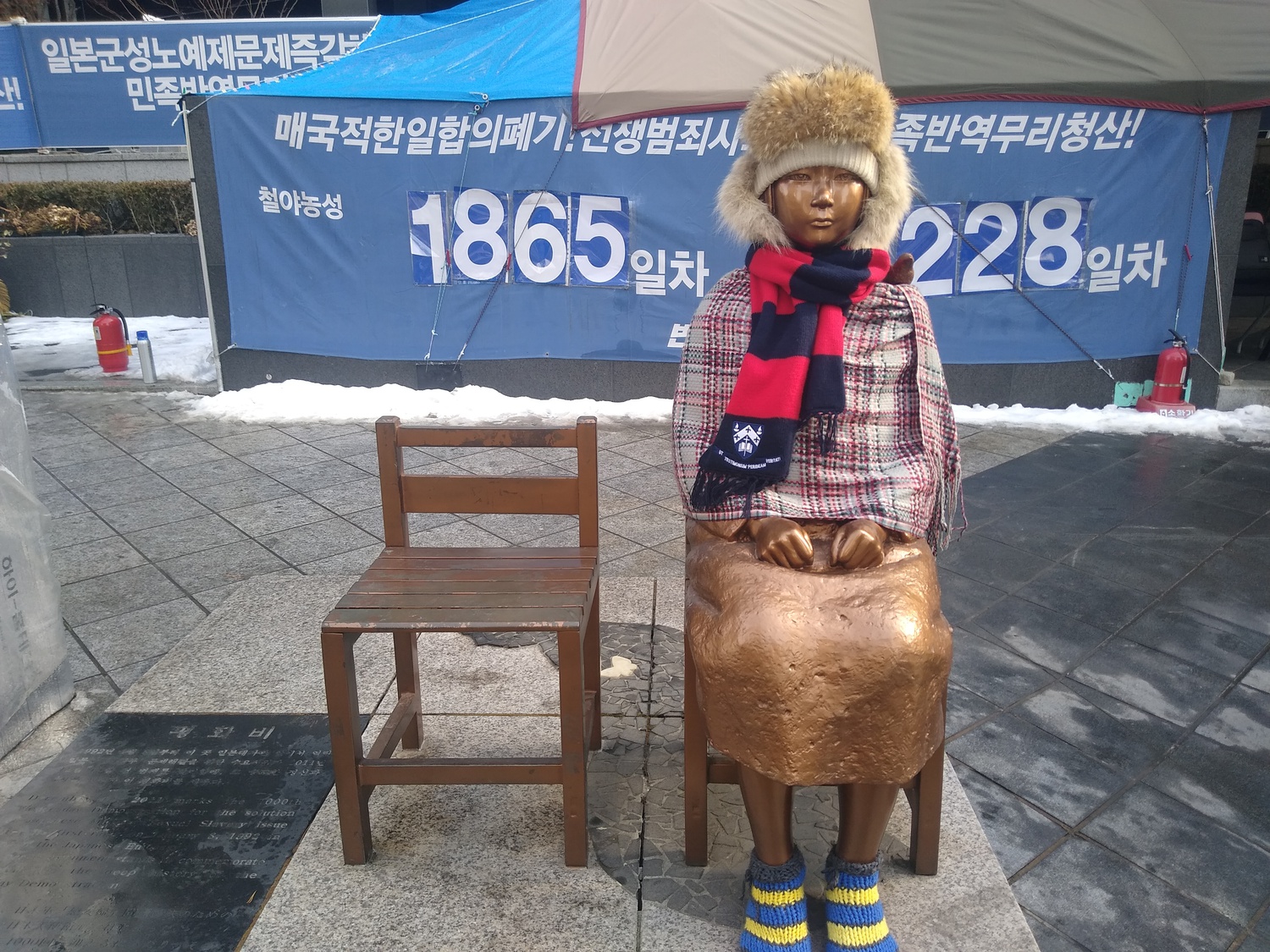 The Statue of Peace in front of the former Japanese Embassy in Seoul, South Korea commemorates comfort women, sex slaves taken by the Imperial Japanese Army during World War II. The slogans on the tarp behind the statue demand the Japanese government to make reparations. By Simon J. Levien

He said the Korean public’s response to Ramseyer’s arguments was analogous to the potential response a scholar would receive for advocating for Nazi war crimes in Germany.

“If I openly advocate Nazi crime in Germany, I think my employment will be endangered by strong pressure from the public,” he said.

Gersen, the Harvard Law School professor, wrote that she defends Ramseyer’s “right to express views that are offensive to some people, on comfort women or any other topic.”

But, she added, “I would not defend a scholar’s right to comport himself with a lack of academic integrity and then take cover under the umbrella of academic freedom.”

Gordon said he believes Ramseyer and his supporters are using the claims that their academic freedom is being suppressed as a “shield” against critiques of their academic integrity.

“With all due respect to academic freedom and the peer-review process in academia, I am obligated to emphasize it is an undeniable fact that Prof. Ramseyer’s article is academically and historically harmful,” Harvard Law School student Janet Park wrote in an email. “It is harmful because it provides a factually inaccurate representation and understanding of WWII history, and the readers of the article will learn the history incorrectly.”

Many of Ramseyer’s critics have called on Harvard and the International Review of Law and Economics to take steps to correct errors that they say exist in his work.

Park, the HLS student, said she hopes the IRLE will publish an “academic response” to Ramseyer’s article within the same issue so that future readers of the journal will not “blindly take Prof. Ramseyer’s claims as facts.”

In February 2021, the journal’s spokesperson, Andrew Davis, wrote in an email that the “print issue is being temporarily held so the Expression of Concern, and comments/replies, can be published in the same issue as the original article to give readers access to the fullest possible picture.”

Later that month, the journal issued an Expression of Concern and announced that it was investigating the historical accuracy of Ramseyer’s work.

Davis did not respond to a request for comment earlier this month.

Stephanie M. Lee — CARE’s program director, who is a practicing attorney — questioned why the journal would publish the original article without vetting it further.

“I think that the IRLE still has not answered that question satisfactorily in terms of why they would publish an article that doesn’t meet that minimum standard,” Lee said.

Ethan Hee-Seok Shin, a researcher at Yonsei University in Seoul, South Korea, called on Harvard to reevaluate the veracity of Ramseyer’s work.

“Whether you like it or not, people give this kind of credibility to research done by people affiliated with any institution at Harvard,” he said.

In an email, Ramseyer declined to address the criticism of his work, writing that he will “comment publicly on the reactions of my critics to my response at a later date.”