‘Me vs. Me’ Album Review: NLE Choppa is His Own Worst Enemy 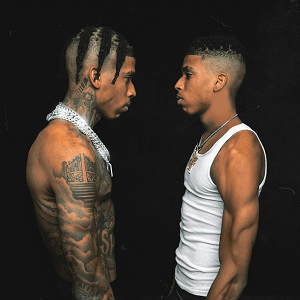 On his new mixtape “Me vs. Me,” NLE Choppa is back in full force. Much like the tape’s title suggests, Choppa can only be described as his own competition, because truly, no one else is doing it quite like him.

On Jan. 28, Choppa premiered his second commercial mixtape. While originally planning to drop the project on Jan. 21, Choppa delayed its release by a week after the death of fellow Memphis rapper and local legend Young Dolph. Rumor has it, however, that Choppa actually postponed his record because of a competing mixtape from “WUSYANAME” rapper NBA YoungBoy dropping the same day. Choppa and YoungBoy have been beefing for a while now, and on Jan. 17, Choppa even threw a punch at a particularly instigative YoungBoy fan in an airport. On “Me vs. Me,” perhaps in response to these troubles, or perhaps not, Choppa has harsh words for his enemies.

You might remember the viral single “Shotta Flow,” which debuted Choppa to the world back in 2019, at the wee age of 16. In that track, listeners were first exposed to Choppa’s most defining quality, his vivacious delivery. Over booming trap basses, sometimes thumping melodic instrumentals, Choppa supplied menacing bars with intense conviction. Back then, and still to this day, there exist few rappers that spit with such energy, conviction, and ferocity.

But even infectious delivery loses its staying power with enough repetition. As Aesop once said, it is definitely possible to have too much of a good thing. Choppa continues to deploy his signature aggressive delivery on this new project, which is good — it’s what drew fans to him in the first place. But he does so with buckshot precision, repeatedly, over the course of a bloated 53-minute project, until this formerly good thing becomes repetitive and uninteresting. It is here that the title “Me vs. Me” rings a little too true, because Choppa’s greatest strength ends up becoming a great weakness. In the three years he’s been on the scene, Choppa has yet to grow creatively.

First, consider the record’s opening track, “Shotta Flow 6.” No, you didn’t misread that. There are indeed five sequels to the first hit that made Choppa famous to begin with (six if you count the Blueface remix). Okay, yes, “Shotta Flow 6” is undeniably a thunderous trap feast, but it nevertheless sets a worrying tone for the album’s originality.

The album moves onto songs like “Trap Phone” and “Stompin,” which are prime examples of Choppa at his most uninspired. They’re dull, run-of-the-mill trap records, featuring monotonic melodies over generic beats. Even with the aggression, Choppa’s unremarkable bars quickly become background noise. The track “Final Warnings,” despite employing brutal descriptions of murder, suffers from a similar lack of ingenuity.

It’s here that the listener begins to realize Choppa really only has three flows, and on top of that, two delivery styles: aggressive shouting and aggressive sing-shouting. Throughout a 16-track project, this formula can get old pretty quickly.

But not even the formula is totally reliable. On “Too Hot,” Choppa’s one selling quality, his powerful delivery, is gone; he actually sounds bored on a song for the first time. Choppa’s presence unfortunately seems to have a chilling effect, as Moneybagg Yo also seems to be drowned in the stupor of it all.

Some features on this EP, however, do shine. On “Push It,” Choppa teams up with Young Thug to deliver a melodic trap banger. In addition to Thug’s reliable verse, the instrumental actually contains some chromatic variation. On “Chicago to Memphis,” G Herbo shows off vocals and lyrics that are genuinely menacing.

On “Change My Ways,” though, the singing takes a turn for the worse. Aggressive bars are followed by nasally singing that is far out of Choppa’s register, resulting in agonizing voice cracks. Songs like “Jumpin” are similarly sonic misses; the instrumental is stagnant and dissonant. Where the ear desperately craves any note progression in the flute riff, there is none.

“Ima Dogg” is hilarious, but not intentionally. The chorus reminds us, "I'm a dog," eight times, leaving you really wondering if he's a dog. Choppa interpolates both Gucci Mane and Famous Dex on this track. “Mmm Hmm,” however, sees Choppa go beyond just interpolation, perhaps leaning too heavily on the signature hums of Kid Cudi.

The best song on the album is also the shortest — this is stated without a hint of sarcasm. “I.Y.B.” is a mean trap banger, and at only a minute and a half long, it is just short enough that Choppa’s vices do not begin to beat the listener over the head. He’s at his best here when the formula is kept short and simple. Fat drums, A booming bassline, and a threatening Choppa delivering cold-blooded bars are all a fan really needs from one of his songs.

You may notice there was seldom a discussion of songs’ lyrical content. This is because one does not listen to NLE Choppa for witty wordplay or thought-provoking lyricism. Already well-known and well-documented (and perhaps also well-criticized) are the tropes of the gangsta rap genre. Choppa, conceptually, provides nothing new or particularly insightful to this style of music. It is the delivery, the beats, and the atmosphere that make audiences gravitate towards Choppa. On this album, there are many moments of that straight-talking trap brilliance, but the majority of tracks unfortunately blend into an unremarkable agglomeration of repetition and monotony.