Former Harvard College Dean Evelynn M. Hammonds said at an event Thursday she regrets initially signing onto a letter that questioned the results of misconduct investigations into professor John L. Comaroff, who is accused of sexual harassment.

Hammonds, a professor of African and African American Studies, moderated a discussion with Anita Hill, a professor at Brandeis University who was thrust into the public spotlight 30 years ago when she accused then-Supreme Court nominee Clarence Thomas of sexual harassment. The event, which focused on gender-based violence, was hosted by the Radcliffe Institute for Advanced Study.

Harvard is reeling over allegations of sexual misconduct against Comaroff, who was placed on unpaid leave in January after University investigations found that he violated the school’s sexual and professional conduct policies.

Hammonds, who served as the dean of Harvard College from 2008 to 2013, signed onto an open letter last week that questioned the results of the misconduct investigations into Comaroff. But after a lawsuit filed Tuesday detailed years of sexual misconduct allegations against Comaroff, Hammonds retracted her support for the original message, along with most other professors who initially signed it.

“This has been a difficult soul-searching moment,” she said at the event Thursday. “After receiving additional information, I retracted my name from the statement. And I want to state that I absolutely stand with the students in this case. And I want to state that I completely support them and I applaud their enormous courage in bringing their charges forward and making these charges known to us all.” 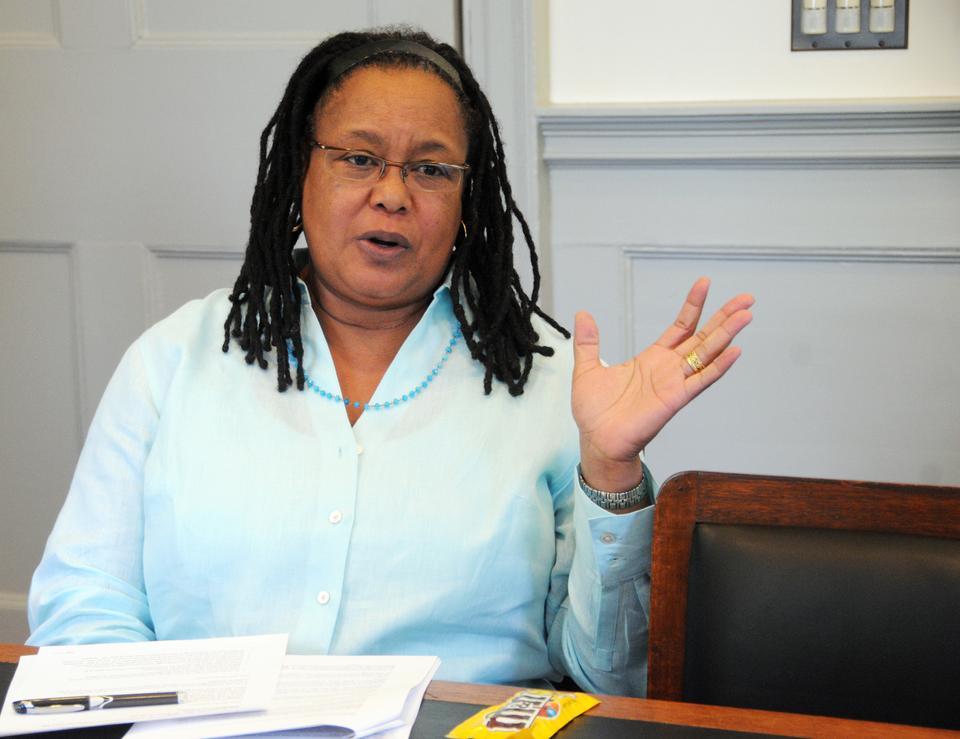 Former Harvard College Dean Evelynn M. Hammonds, pictured during an interview with The Crimson in 2010 By Sara Joe Wolansky

Some of the allegations against Comaroff that were detailed in Tuesday’s lawsuit had been reported previously in The Crimson and the Chronicle of Higher Education.

At the start of the event, Radcliffe Dean Tomiko Brown-Nagin said some Radcliffe affiliates had called for the discussion to be canceled in light of the Comaroff controversy.

“A conversation on the issue of gender-based violence with Anita Hill, who has spoken truth to power for 30 years could not be more important today,” she said. “My position is that as an institution of higher education, we must seize opportunities to explore issues like this and to engage deeply and openly we have an obligation to engage thoughtfully with one another. And it is my hope that this afternoon’s conversation provides an opportunity for us to do precisely that.”

After introducing Hill, Hammonds said she regrets signing the letter.

“What I believed at the time was a lack of transparency with respect to very important and essential processes,” she said. “The letter, though, has been read as supporting the accused and questioning the veracity of the students who brought forth the charges. That was never what I intended, and I truly regret signing the letter.”

The conversation centered around the launch of Hill’s book, “Believing: Our Thirty-Year Journey to End Gender Violence,” which explores the mechanisms of gender-based violence.

—Staff writer Caroline E. Curran can be reached at caroline.curran@thecrimson.com.

—Staff writer Darley A.C. Boit can be reached at darley.boit@thecrimson.com.