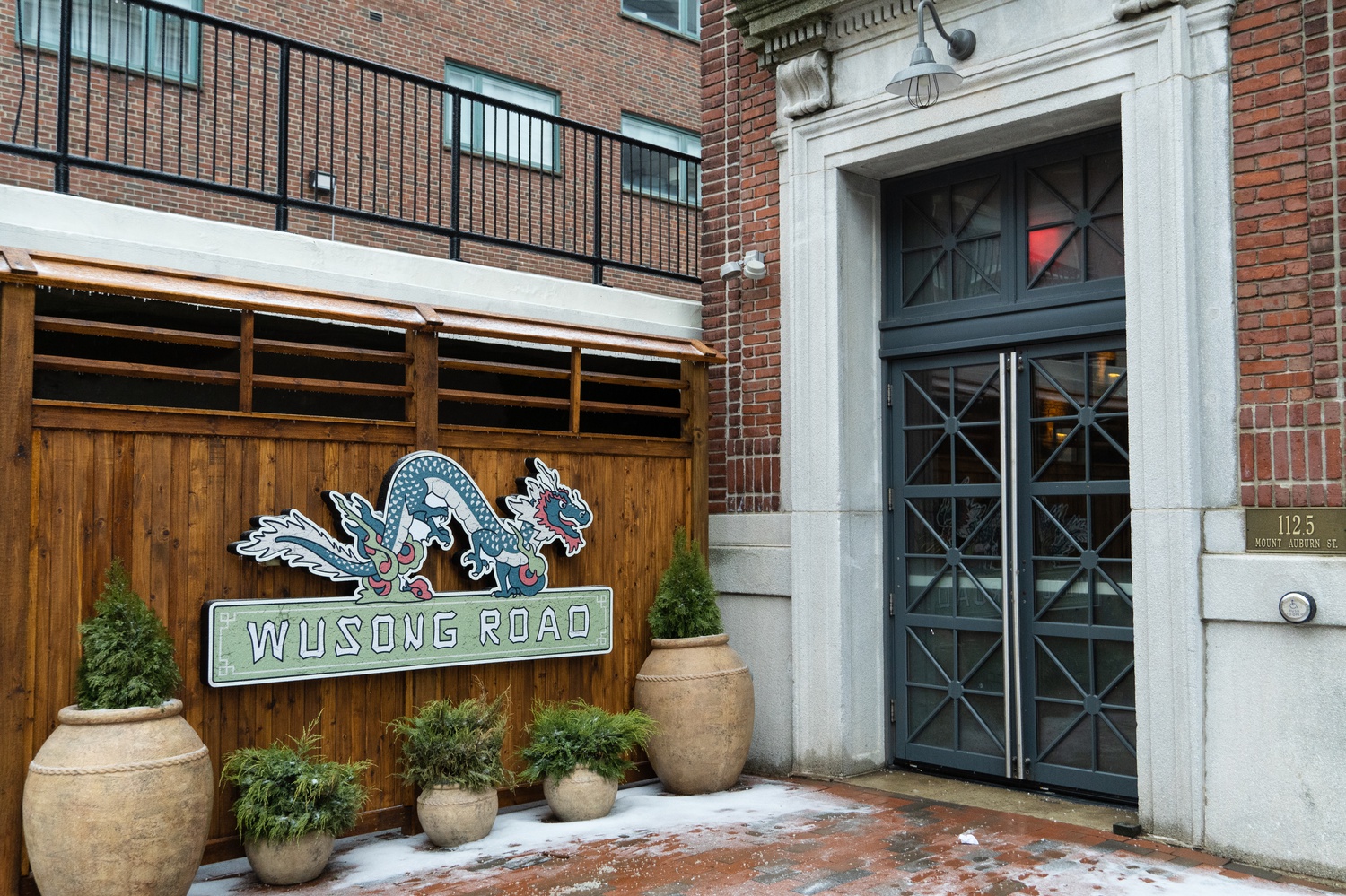 The old Conductor’s Building on Mount Auburn Street stands as an awkwardly narrow wedge, sitting next to an alleyway wider than itself. But while the exterior of the building remains inconspicuous, the inside has been transformed into a Chinese tiki bar and restaurant named Wusong Road after the first Conductor’s Building in Wusong, China.
By Jem K. Williams

The old Conductor’s Building on Mount Auburn Street stands as an awkwardly narrow wedge, sitting next to an alleyway wider than itself. The relatively dwarfed structure seems unsure of its own position in Harvard Square, despite its quintessential Cambridge style: old brickwork framed by ledges of concrete. With sullen windows and edges that retract diagonally from the front, the facade seems to apologize for its own existence.

While the exterior of the building remains inconspicuous, the inside has been transformed into a Chinese tiki bar and restaurant named Wusong Road after the first Conductor’s Building in Wusong, China. The interior glows with a warm light that emanates from the elaborate lanterns hanging on the ceilings. Dark wood and red accents contrast the exterior’s exposed brick, a proudly preserved feature of the original space. The upstairs is a carefully crafted masterpiece of dark green, palm leaves, and textured accents of bamboo and straw that evokes a rustic rainforest with a modern feel.

The story of Wusong Road’s namesake is intriguing in itself. The Woosung Railway was constructed in 1876 by British firm Jardine, Matheson & Company — without the permission of the Chinese government. It faced vehement opposition from the Chinese public and authorities, who saw the foreign intervention as a blatant act of disrespect.

Jason Doo, the owner and chef of the Cambridge restaurant, acknowledges that the railway was built “not necessarily for the best reasons — more for opium smuggling.” Though, he notes in jest, “we ignore that part.”

Tensions flared between the two countries as negotiations went back and forth, with the Chinese trying to buy the railway and remove its British influence. Finally, on Oct. 24, 1876, the two sides reached a settlement, and the Chinese gained control of the railway. Though it was profitable, the railway still drew resentment from official Shen Pao-chen, who ordered its destruction in 1877.

Thirty-five years later, in 1912, the headquarters for the Boston Elevated Railway’s 7th division opened its doors. The Conductor’s Building stood as a symbol of the pinnacle of public transportation at the time. It was part of the new Cambridge subway system that connected Park Street to Harvard Square. Spacious work counters, cluttered bulletin boards, and checkerboard-topped tables occupied the first floor. The second floor remained reserved for the superintendent’s office, waiting rooms, and a sizable records cabinet.

The Boston Elevated Railway was eventually consolidated into the Metropolitan Transit Authority, which became the Massachusetts Bay Transportation Authority. As the organization grew, the Mount Auburn Street headquarters eventually faded from use. For its role in the expansion of the Harvard Square Historic District, it was awarded a place in the National Register of Historic Places in 1988. For nearly 40 years, the relic sat, silently decaying. What once had been a bustling control center of offices, lobbies, and assembly rooms containing the helm of a state-of-the-art transportation system was now a withering eyesore. 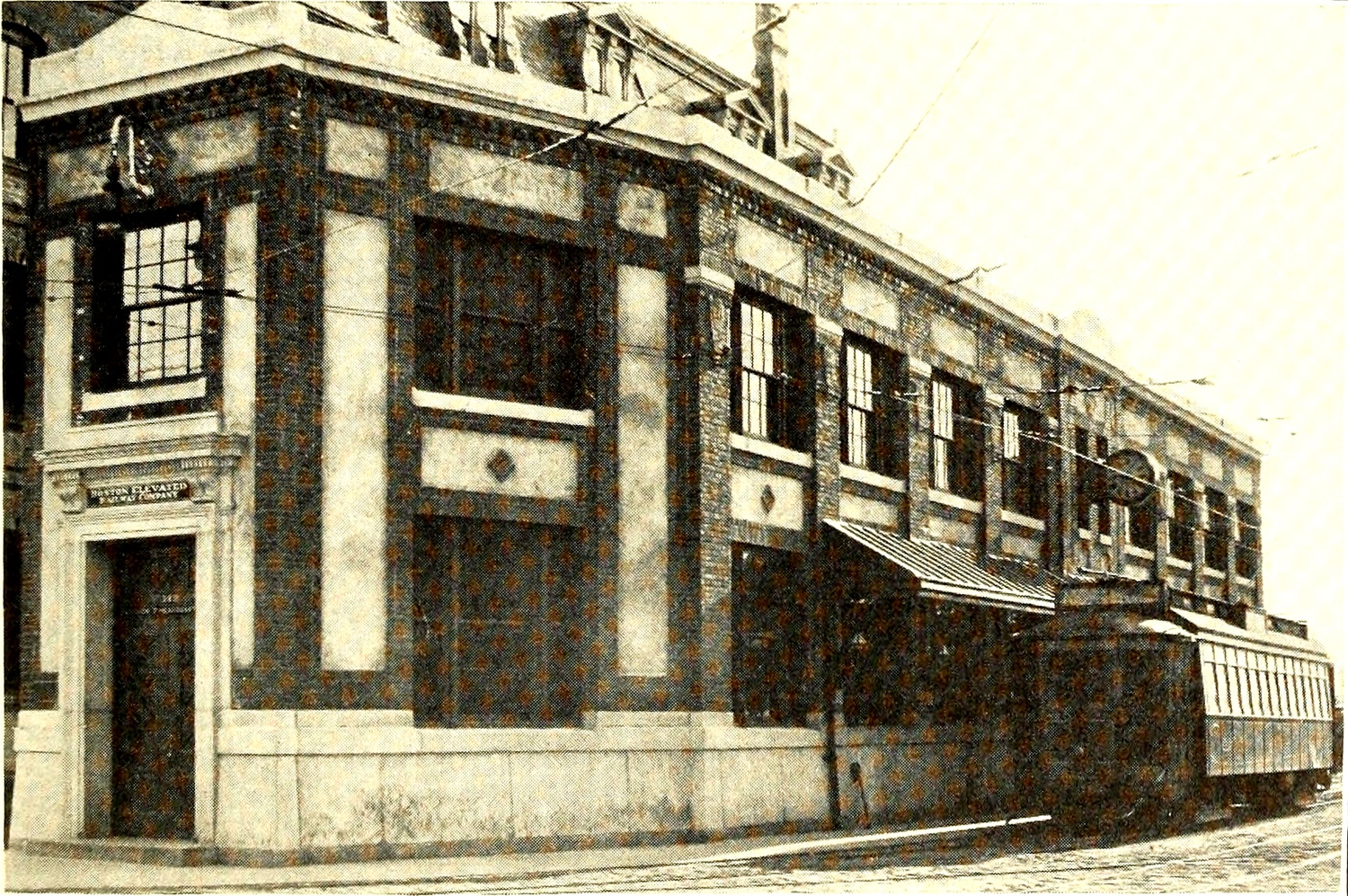 Pre-renovation, the building was a “hollow shell,” Doo says. “The basement was full with four feet of water. Everything was essentially just rotted.”

When the MBTA eventually sold the building in 2012 — 100 years after its original construction — its fate was a source of concern for its neighbors. Though it was in dire need of an update, locals were anxious that developers might use the site to further homogenize Harvard Square. A Cambridge Community Television video conveyed local fears that “the money the property could bring in may win out over its historic value.”

In 2012, the last standing memory of the original Cambridge subway system was sold to Carpenter & Company to be renovated and restored to its former glory.

The rebirth began in 2014 when the new owners officially set out to turn the forsaken structure into a vibrant French restaurant. Les Sablons, named after a train station in France, opened its doors in 2017, only to shut them again the next year. In 2021, the building reopened, now branded as Wusong Road.

Along the way, the building’s historic status has proven to be a major roadblock. Extensive state and local government approval is required for each and every change that the building undergoes.

“I still can’t put signs up on my building,” Doo states with exasperation, because he claims, “it takes 150 days” to get new signs approved.

Despite these limitations, Wusong Road has brought an old building into the new age. Tying together a historically important building with a historically fraught name, Doo has designed an establishment that aims to give them both a new life.