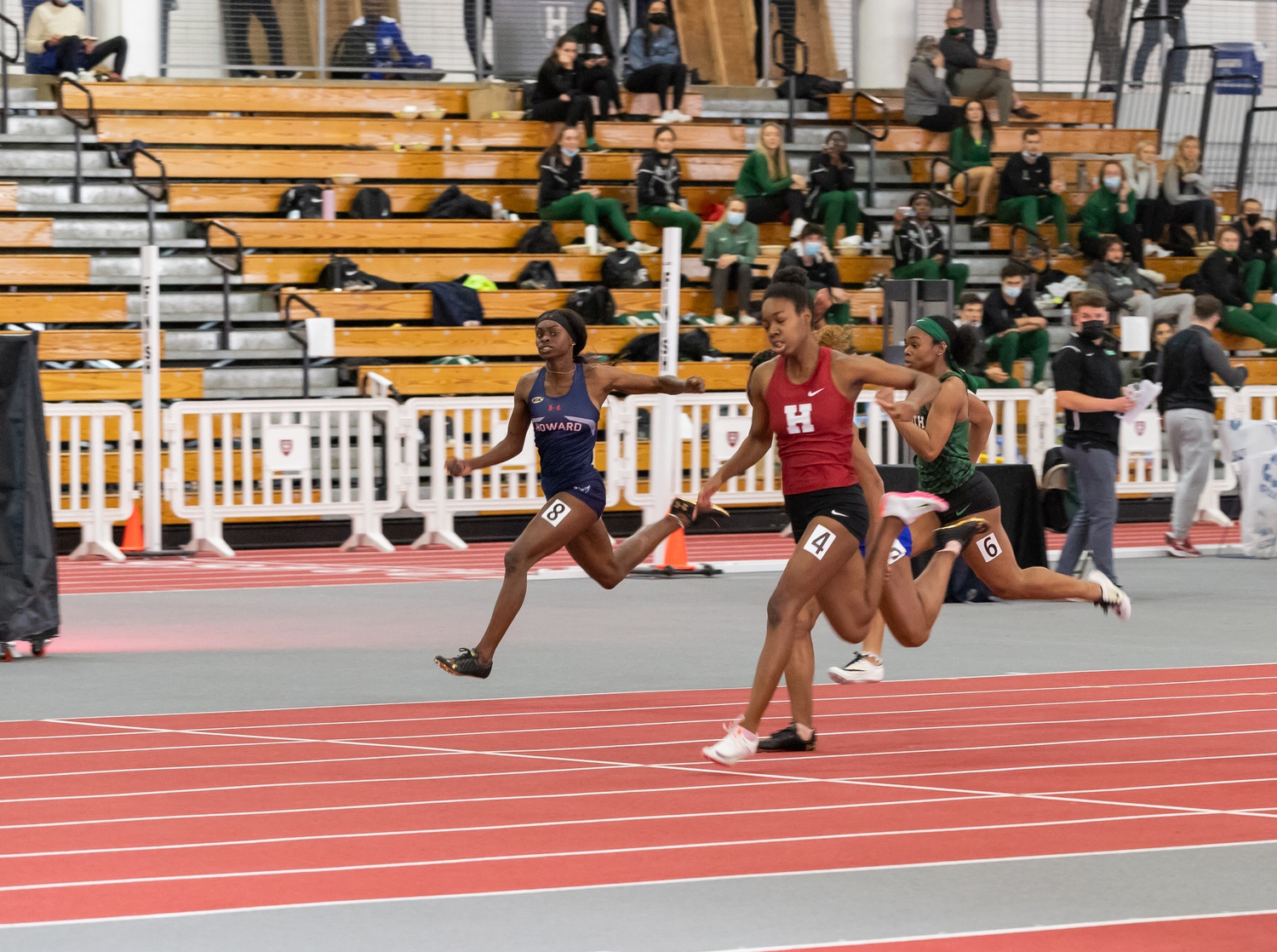 By The Crimson Staff
By William Connaughton

The Harvard Track & Field program has been in strong form recently, breaking school records and coming out on top in the home Crimson Elite meet and winning multiple events in Scarlet & White Invitational.

Following a cancellation of the annual HYP meet during the winter snowstorm on January 28th, the Crimson runners had a quick turnaround, competing in the John Thomas Terrier Classic at nearby Boston University. In the meet, multiple Harvard athletes extended their undefeated streak on the season. Freshman thrower Kenneth Ikeji, junior sprinter Tina Martin, and sophomore standout shot-put Alexander Kolesnikoff all extended their undefeated seasons in the meet, with Kolesnikoff tying his own Harvard record he had set the week before at the Battle of Beantown meet with a distance of 19.05m.

The following week, for the first time in two years, Harvard hosted the Crimson Elite meet with a field of 15 teams, including Ivy League competitors Yale, Brown, and Dartmouth. The Crimson squad dominated the meet, with both the men and women’s teams placing first overall.

“Adjusting to this “new normal” on the athletics side has certainly been a frustrating experience,” commented senior co-captain Max Serrano-Wu. “With over half the team being completely new to campus and college athletics, we’ve had to put in a lot of work to bring back the team cohesion that got us runner up at Heps in 2020. And while we take things one step further than most teams, we’re grateful to have the opportunity to finally compete as a team again and do the sport we love.”

Leading the charge for Harvard was freshman pentathlete Izzy Goudros, who opened up the day for Harvard with a win in the 60m hurdles and the long jump. The Toronto native set the tone for the Crimson capturing Harvard’s first event crown of the day in the event.

Following Goudros’ example, the Harvard women dominated the weight throw, with sophomore Estel Valeanu placing second with a distance of 17.76m and fellow sophomore Cammy Garabian finishing in first with a distance of 17.44m. In a similar show of force, the Crimson women took the first, third, and fourth place in the shot put with junior Sarah Omoregie leading the way with a throw of 15.12m. In the final field events, juniors Alana Carroll, Kylie Hilton, and first-year Anastasia Retsa took the top three spots in the pole vault, with Alana clearing a height of 4.11m. Both Alana and Kylie were the first Harvard women ever to clear 4.00m, with Kylie and Alana both breaking the Crimson record.

On the track, the Harvard women won in both the 60m, with Martin continuing her season-long dominance in her event, and 400m, with first-year duo Victoria Bossong and Egbe Ndip-Agbor capturing first and second respectively in their event. In the 60m hurdles, senior Jada Jones broke the Harvard record previously set by Olympian Brenda Taylor ‘01. However, this performance was still only enough to net her second place in the event amongst strong competition.

For the men, Ikeji and Kolesnikoff remained undefeated in throws, capturing first in the shot-put and weight-throw. Kolesnikoff’s throw of 18.98m was 0.96 meters ahead of second place and 2.53m ahead of third place. Ikeji with a throw of 21.20m broke his own Harvard record and was 1.78m ahead of second place. In the triple jump, the Crimson continued their dominant form in the field events, with sophomore Sebastian Pereira and first-year Daniel Falode taking the top two spots.

Finally on the track, freshman runner Peter Diebold won the 400m, with a time of 48.90. In the 60m sprint, sophomore DeMarkes Stradford placed third with a time of 6.74, tying the Harvard all-time record in the event.

To finish out their week, a subset of the men and women’s team competed in a number of running events at the Scarlet & White Invitational. The Harvard men captured first in the 400m and the 3000m, with strong performances in the men’s 400m and the women’s 200m and the mile.

For the men, sophomore cross-country standout Acer Iverson led the Crimson to the win in the 3000m and fellow sophomore Greg Lapit pulled out the win by only 0.08 seconds in the 400m. With his time of 46.98, Lapit set the new Harvard record. Diebold placed second in the 500m and freshman Joe Ewing placed third in the mile with a time of 3:58.87, good enough for third and second best in the all-time Crimson record books respectively.

The Harvard women enjoyed similar success across the track events. Senior cross-country runner Anna Juul led the way in the mile, with the team placing second, fourth, eighth, ninth, and tenth behind her. Martin continued her dominant streak this time in the longer 200m event, finishing second with a time of 23.80. Finally, to close out the day for the Crimson, sophomore Eloise Freitag crossed the finish line in fourth in the 3000m with a time of 9:35.17.

Splitting up the roster this coming weekend, a portion of the team will compete in South Carolina at the Clemson Tiger Paw Invite, while another portion of the team will compete in BU’s Valentine Invitational. Despite the challenges of integrating the roster after two years off of competing, the team has high hopes to bring both the Ivy League indoor and the outdoor track titles back to Harvard following the championship seasons for men and women’s cross country team in the fall and the second place finish in 2020.

“It’s pretty simple, we want to bring the indoor and outdoor track and field championship trophies back to Cambridge,” noted Serrano-Wu. “The cross country women did an outstanding job winning the Ivy League Championship this past fall, and the men finished in a close second. The league is the strongest it’s ever been, but I believe that both teams can build on our second place finishes from 2020 and come out on top this time.”

Beyond team goals, the program has many athletes competing for individual NCAA championships in their respective events, something to follow as the season progresses.