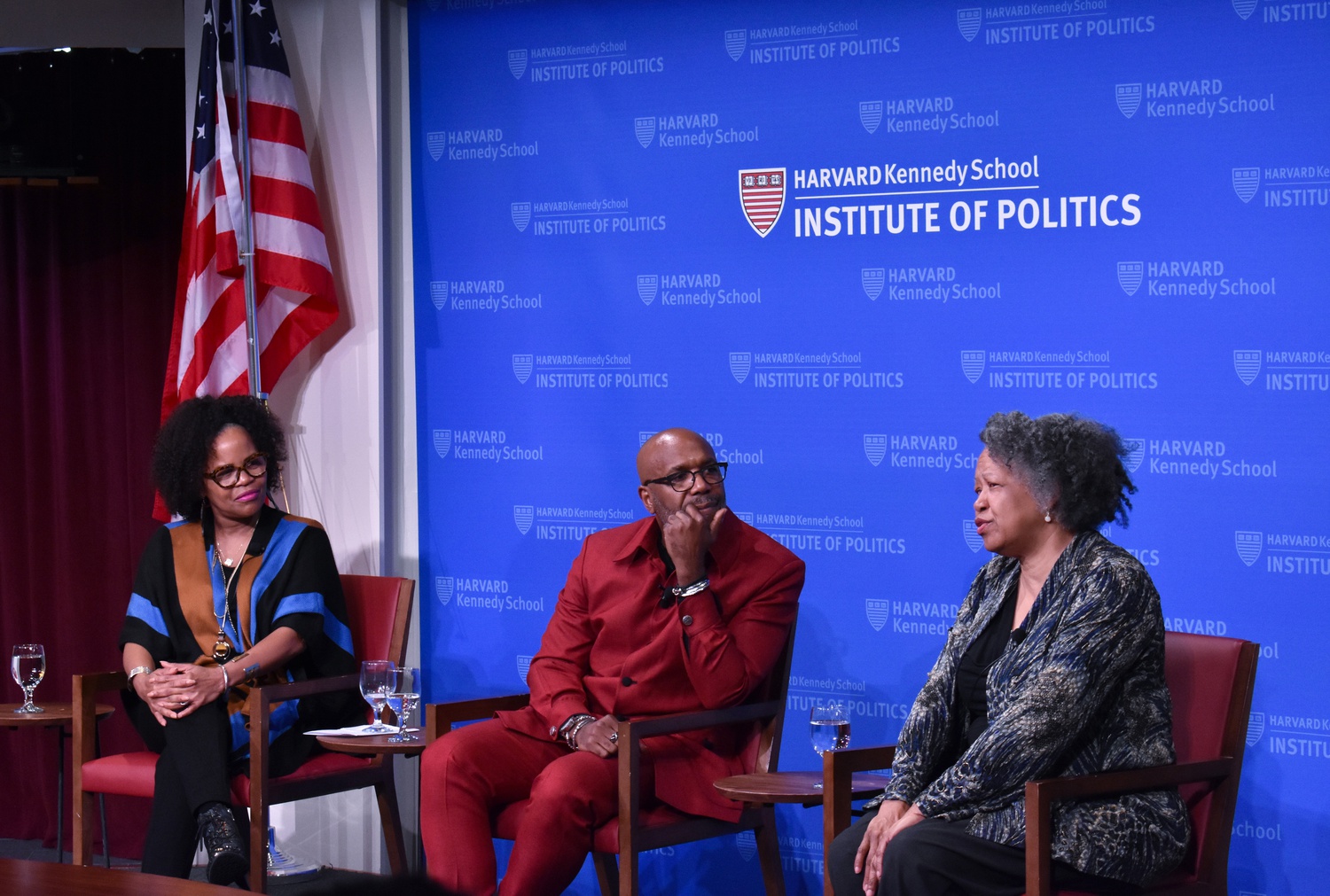 The forum, the last of the fall semester, was part of a larger speaker series on racial justice called “Looking Back, Paying it Forward” jointly hosted by the IOP and the Institutional Antiracism and Accountability Project at the Ash Center for Democratic Governance and Innovation.

Christopher kicked off the event by highlighting what she described as a lack of reckoning with racial injustice in America.

“Over 44 countries in the world have implemented truth and reconciliation processes," she said. "Our country has yet to implement a national truth process."

In response and aiming to spark “transformation of the cultural ethos” in America, Christopher developed the Truth, Racial Healing, and Transformation framework for racial equity. The program focuses on changes in two broad categories: narratives and structures.

“The first is narrative change: understanding that we don't tell the truth about our story. As a country, we don't own up to our history,” she said.

Singleton credited his experience as a graduate student studying the educational system as his impetus for developing the Courageous Conversation protocol for interracial dialogue.

“I discovered inequities in K-12 education — and particularly secondary education — that absolutely astounded me,” he said. “You have all of these students, as you get to the back [of the school], who begin to look like me, who really don't know why they're there.”

“And the big conundrum was that folks in the school could not even talk about these issues,” Singleton added.

He explained that Courageous Conversation is a three-tiered structure aimed at having personally-grounded conversations about racial justice.

Singleton said it can be useful to refer to examples of successful racial equity initiatives across industries to accelerate the racial justice movement. According to Singleton, drawing attention to these “beacons” also helps hold organizations accountable for their racial justice goals.

“It also puts pressure on those organizations to sustain their work because sometimes they get a bit complacent, particularly when everyone's touting them and giving them all kinds of accolades,” said Singleton.

Christopher concluded the event by saying that racial justice can only be achieved by bringing about a change in personal values.

“We will never transform this country until the majority — or at least 25 percent —of the people have totally rejected the belief in a false hierarchy of humanity,” Christopher said.

“However we get there, we've got to get a maximum number of people who have been liberated from the yoke of racism, but more importantly, have begun to understand and value the love that we as human beings can only give to each other,” she concluded.