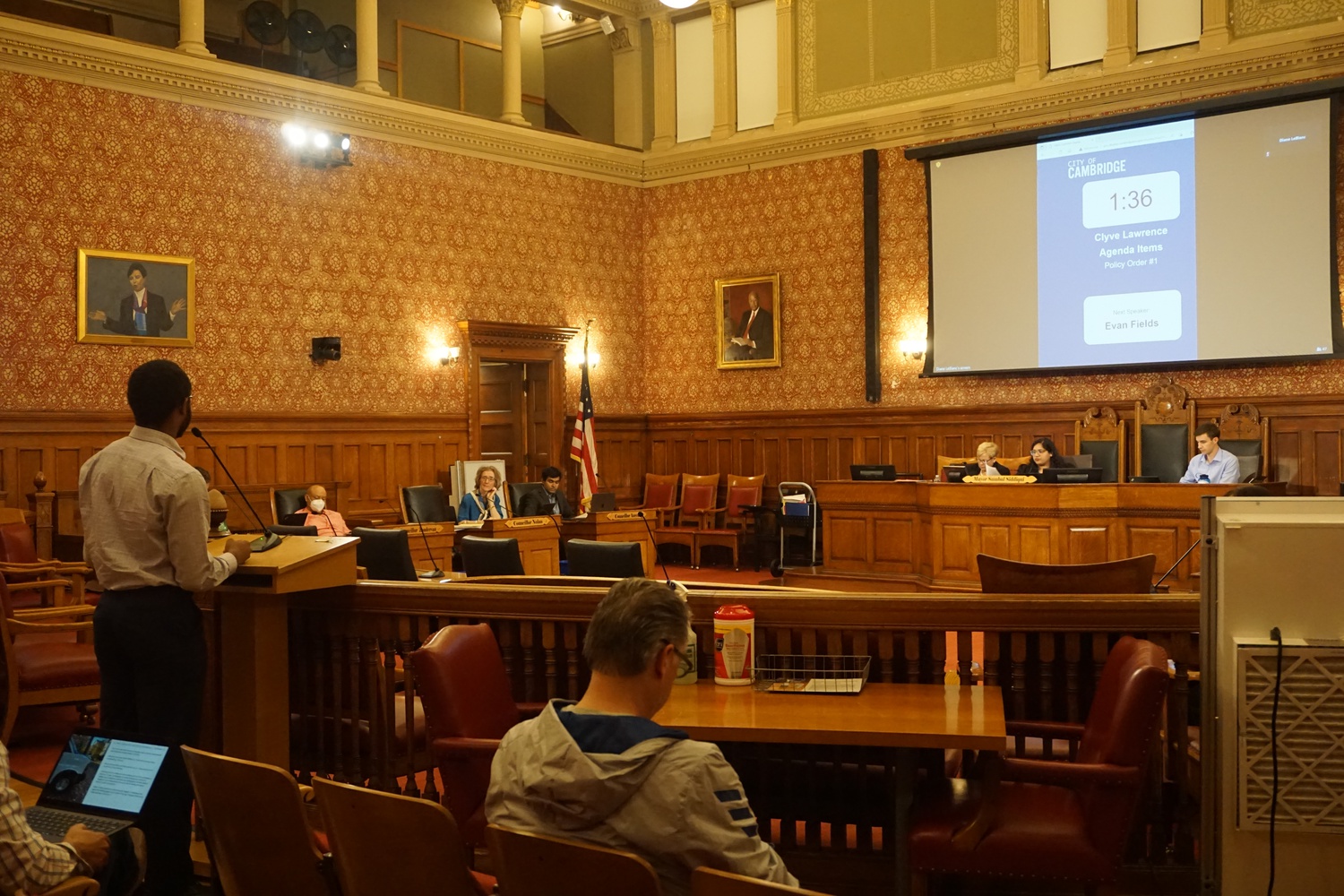 The Cambridge City Council met in the Sullivan Chamber on Monday evening for their weekly meeting. By Claire Yuan
By Elias J. Schisgall, Crimson Staff Writer

During a Monday evening meeting, the Council voted 7-2 to adopt a policy order directing City Manager Yi-An Huang ’05 and city staff to investigate the feasibility of banning right turns on red lights in Cambridge.

The policy order calls on the city to consider banning the driving maneuver to “protect vulnerable road users like pedestrians and cyclists” in accordance with Cambridge’s Vision Zero goals for traffic safety.

Vice Mayor Alanna M. Mallon, who co-sponsored the order, said in an interview that Cambridge needs to identify sources of “dangerous conflicts” between drivers and other road users such as pedestrians and bikers.

“We really just need to make sure that those cars are looking out for folks who are more vulnerable than they are in their cars,” she said.

Mallon cited data from a study in Washington, D.C. that examined banning right turns on red at 100 intersections and found a steep decline in vehicle-on-vehicle conflicts and vehicles failing to yield to pedestrians. The City Council in the District of Columbia has since voted to ban right on red at most intersections by 2025.

According to Mallon, around 70 to 75 percent of intersections in Cambridge already prohibit right turns at red lights with a traffic sign. She said codifying a full ban would signal to other Boston-area municipalities that they should implement similar policies.

“If we really want true safety improvements across the region, we need to be a leader in this,” Mallon said.

But Councillor Paul F. Toner, who voted against the order, described it as “unnecessary,” citing the high prevalence of site-specific prohibitions on right turns at red lights in the city.

“The city traffic authority already has the authority right now to go out and put ‘no turn on red’ signs up anywhere they think it’s unsafe,” Toner said in the meeting. “I just suggest that we continue to follow our current practice.”

In the meeting, the Council unanimously voted on two amendments to the order that gives the Cambridge Traffic, Parking, and Transportation Department and the Massachusetts Department of Transportation the flexibility to allow right turns on red in cases “without any negative safety impacts.”

If the ban is finalized, Cambridge will become one of a handful of American cities that prohibit right turns on red. In addition to Washington D.C., right on red is illegal in New York City and downtown Ann Arbor, Mich.