‘We Just Have to Get Better at Taking Care of Each Other’: Comedian Jon Stewart Talks Veteran Issues at Harvard IOP Forum 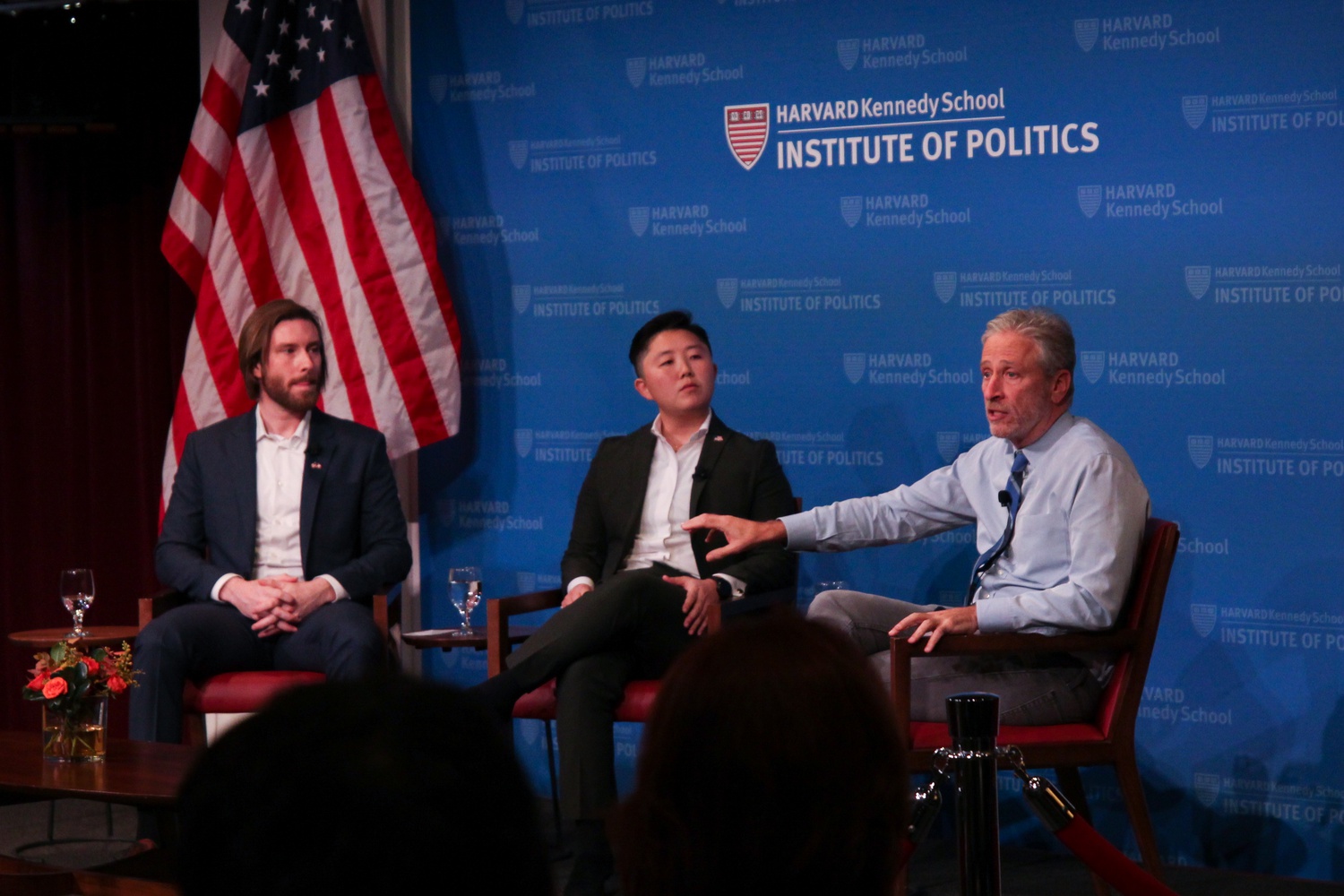 Jon Stewart, a comedian and former longtime host of “The Daily Show,” advocated for increased support for veterans and first responders at a Harvard Institute of Politics forum Friday afternoon.

Stewart has often urged Congress to pass legislation improving health care access and boosting funding for veterans and 9/11 first responders, frequently traveling to the U.S. Capitol to speak with lawmakers in person. Harvard Kennedy School students Grace Y. Park and Soren T. Duggan, who both previously served in the U.S. Army, moderated the discussion with Stewart.

Stewart said he was inspired to advocate for first responders while living in lower Manhattan, where he witnessed the work of emergency workers and volunteers firsthand during the 9/11 attacks.

“I was so appreciative of everything that they were giving and so devastated by what we were all feeling,” Stewart said. “When I found out the struggles that they were having based on this selfless giving that they had done, I tried to turn that fury into something positive.”

Stewart said he vocally opposed the wars in Iraq and Afghanistan on “The Daily Show” and began visiting injured troops at the Walter Reed National Military Medical Center in Bethesda, Maryland. He said his trips to the hospital helped him understand that “the value of this country — in terms of its military, in terms of all of it — is in its human capital.”

“Once you begin to recognize that, you become even more certain that the decisions that are made that affect [service members’] lives and their families’ lives are sometimes made frivolously — and without concern for the cost to that human capital,” he said.

But despite Stewart’s advocacy for first responders and veterans, he said he would not label himself a “patriot.”

“I always really shy away from the types of labels that are reductive,” Stewart said. “I don’t suggest that I’m a patriot.”

“What I do suggest is, I care deeply,” he added.

Stewart also drew a distinction between supporting military service members and supporting the actions they are ordered to carry out in fulfilling their duty.

He added that the United States is often "performative in its patriotism," saying that "there is nothing that we won’t do for our fighting men and women" except take care of their needs.

A nation’s capacity to care for its servicemen is the “lowest hanging fruit” and a marker of its ability to provide for the welfare of the general population, according to Stewart.

“If we can’t do it for them, what chance do the rest of us have?” he said.

Stewart also said it was a struggle to convince Congress to pass laws supporting veterans.

In his closing remarks, Stewart said the government system is “incentivized to be adversarial to the people” and propped up by hundreds of dedicated legislative aides.

“You are going to be those people,” Stewart said. “You are the glue, foundation, and everything. Trust me, what you’re going to do will matter.