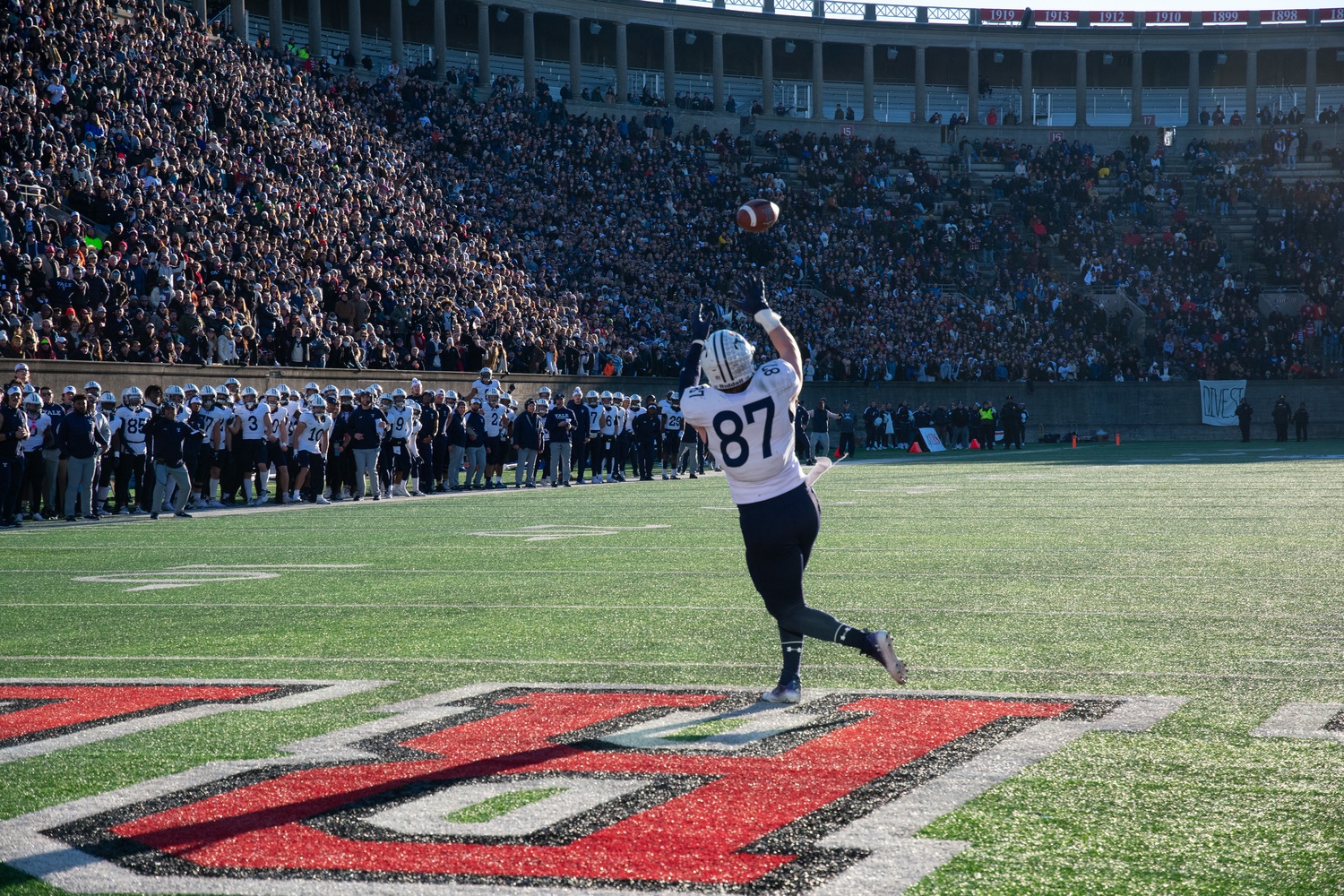 Yale junior Jackson Hawes receives a pass in the end zone in the fourth quarter of the Harvard-Yale game Saturday. The catch gave the Bulldogs a lead that it never relinquished. By Julian J. Giordano
By Jack Silvers and Griffin Wong, Crimson Staff Writers

There must have been a sense of deja vù for Harvard fans during the 138th playing of The Game.

Trailing by five late in the fourth quarter, Harvard had a chance to stage a repeat of the miraculous late-game comeback that lifted it past the Bulldogs in New Haven last November. After forcing a Yale punt, Harvard got the ball back with 42 seconds to go, needing to go 75 yards to the end zone with no timeouts to win the game. The Crimson hoped for a rerun of last year’s final sequence, when Harvard required 66 yards in 59 seconds.

But this year, there was no miracle in the making.

The Crimson failed to reach the end zone as senior quarterback Charlie Dean airmailed his fourth interception of the contest, allowing the Bulldogs to capture a 19-14 victory and the Ivy League title in the first iteration of The Game at Harvard Stadium since 2016.

After a 17-yard completion on a crossing pattern to sophomore wide receiver Scott Woods II to open Harvard’s final drive, any similarities between this year’s final possession and last year’s evaporated. Under heavy pressure and on the precipice of taking a game-ending sack, Dean flung the ball into the air in desperation. But there were no Harvard receivers around, and the football floated instead into the arms of Yale linebacker Hamilton Moore for his second interception of the game.

“We’re really confident in our defense,” Yale head coach Tony Reno said. “We work on situations all the time, and our defense has really grown over the course of the season, and been very good in those situations.” 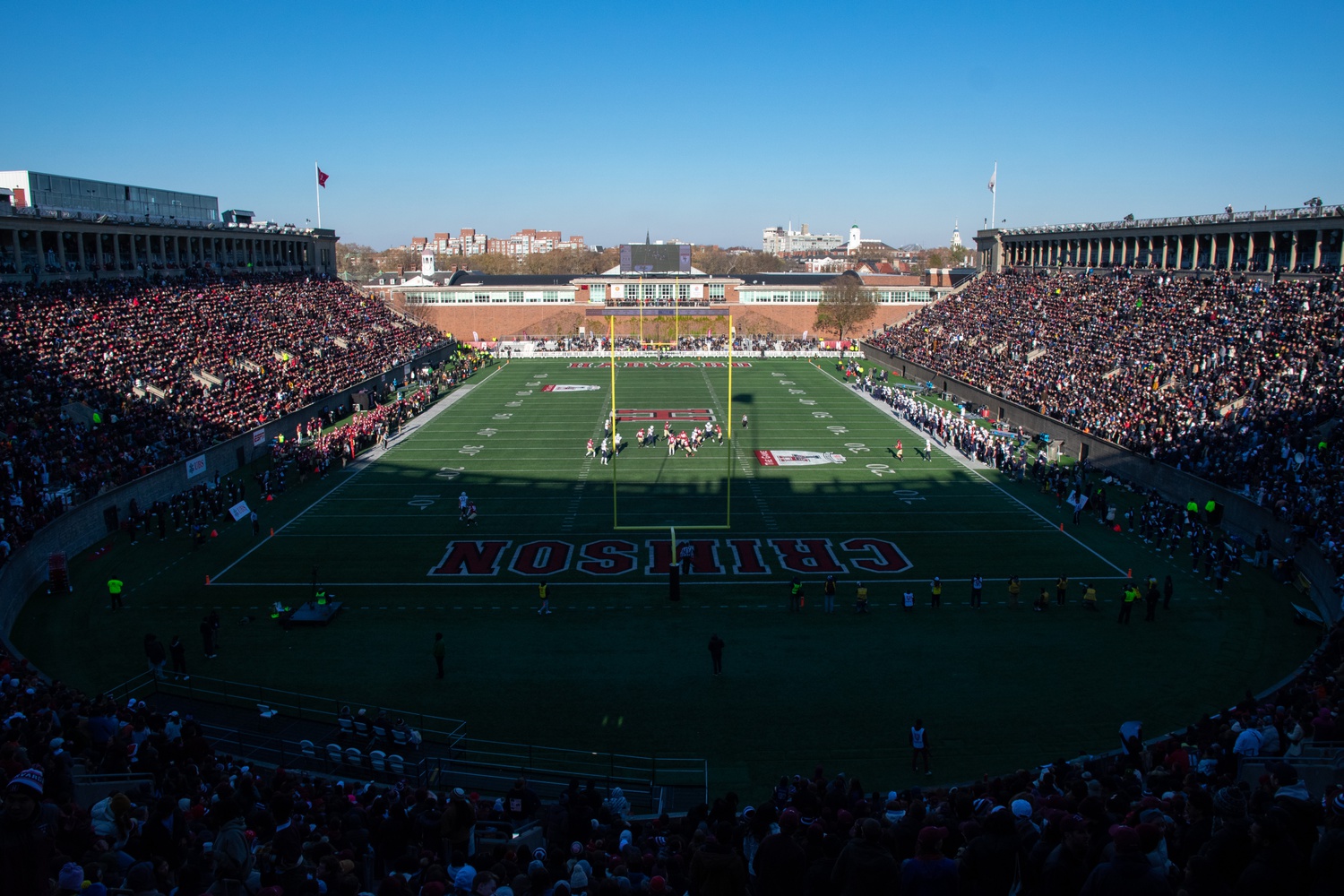 A sellout crowd of 30,006 fans from Harvard and Yale made their way to Harvard Stadium on Saturday for the 138th Playing of The Game. They were treated to an ugly defensive battle, with the Bulldogs coming out on top, 19-14. By Julian J. Giordano

With temperatures in the low 40s, cloudless skies, a sellout crowd at Harvard Stadium, and two teams vying for a conference championship, the conditions seemed perfect for an unforgettable battle in Boston.

But the teams’ offenses were far from perfect. Dean tossed four interceptions and Yale signal-caller Nolan Grooms threw for just 144 yards. In the end, Dean’s aerial ineptitude cost his team the game.

Yale’s victory — combined with a 20-19 Penn win over Princeton — gave the Bulldogs sole possession of the Ivy League crown. The conference title is Yale’s 17th all-time, which ties with Harvard for the third most, behind Dartmouth (20) and the Quakers (18).

Both teams were loose with the football early. Grooms fumbled on the Bulldogs’ first play from scrimmage, allowing the Crimson to get the ball back on the Yale 30. But Harvard was unable to capitalize, and two drives later Dean threw the first of his interceptions, a tipped ball over the middle that Moore snagged in the end zone to end Harvard’s first red zone opportunity. The interception was Dean’s fourth of the season and his first since the Crimson’s 21-20 loss to Columbia Nov. 6. After protecting the ball well all season, the senior signal-caller went on to more than double his season total for picks, as the Yale defense continuously delivered pressure and Dean was fazed.

Early on, the game was dominated by the teams’ punters, Crimson sophomore Sebastian Tasko and the Bulldogs’ Jack Bosman, who were kept busy by offenses that struggled to string together momentum. Of the first seven drives, four were punts, two of which were booted by Tasko. The other Harvard boot was the rarely-seen pooch punt, courtesy of Dean.

Following Grooms’ fumble, head coach Tim Murphy opted to send his offense out on fourth and six from the Yale 26, attempting to draw the Bulldogs offsides. But junior tight end Tyler Neville was called for a false start, knocking the Crimson out of field goal range and staking it to fourth and 11. Murphy responded by sending the offense right back out, but Dean took the snap and then snapped off a rainbow punt that was downed at the six-yard line. 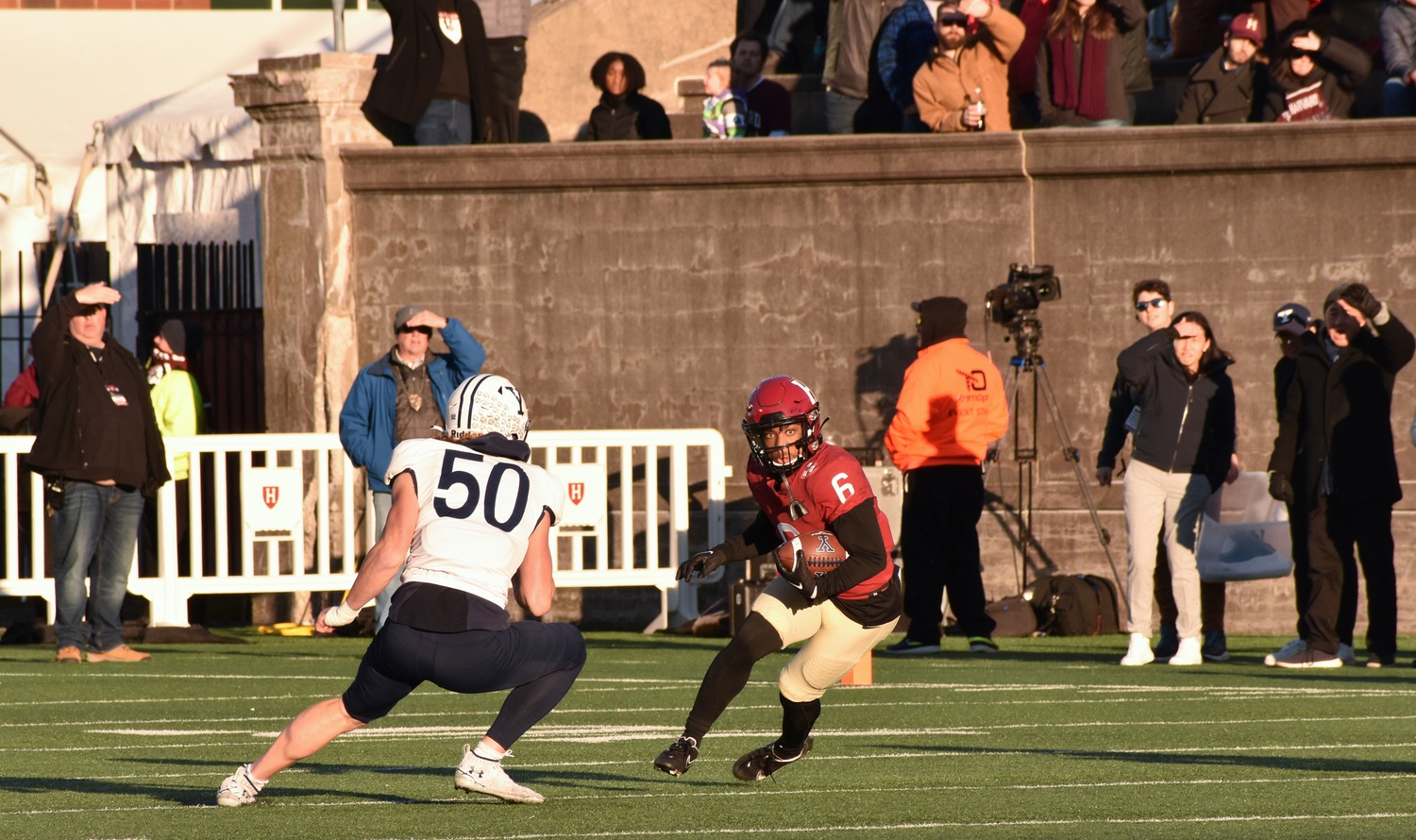 Sophomore wide receiver Scott Woods II looks to make a cut in Saturday's 19-14 loss to Yale. Woods had a breakout performance, scoring the second touchdown of his career on a 64-yard catch-and-run in the second quarter. By Christopher L. Li

The visitors got on the board first on a nine-play, 65-yard drive in which Yale demonstrated why it was the top rushing offense in the Ivy League, gaining 46 yards on the ground. The dagger play was Grooms’ 21-yard third and six carry, in which he found a gaping hole on the right side of the Harvard defense and beat several Crimson defenders to the sideline. The southpaw entered the contest as the Ivy League’s second-leading rusher, behind only Harvard senior back Aidan Borguet. Then, a few plays later, the Robin to his Batman — running back Tre Peterson — punched it in from one yard away to give Yale the first lead of the contest.

“He provided a unique threat in his ability to escape the pocket,” senior defensive lineman and captain Truman Jones said of Grooms.

Overall, the run-heavy Bulldogs offense ran roughshod over Harvard’s typically stout defensive front. Although the Crimson has previously excelled against opposing running backs with its strong defensive line, dual-threat quarterbacks like Grooms have typically posed problems. It has previously been burned by Holy Cross’ Matthew Sluka, Cornell’s Jameson Wang, and Princeton’s Blake Stenstrom, and Saturday was no exception. On his 15 carries, Grooms picked up 63 yards, mostly on scrambles along the left sideline. But Harvard struggled against Yale’s running backs, too, allowing Peterson and change-of-pace back Joshua Pitsenberger to rack up a combined 137 yards.

By contrast, the Crimson struggled to get its running game going. Borguet, Harvard’s offensive star, was held to 62 yards on 18 carries and kept out of the end zone for just the third time this season. The Crimson especially struggled on inside runs, which have been Borguet’s specialty as a ground-and-pound ball carrier during his career at Harvard. Borguet’s 1,182 rushing yards during the 2022 campaign are the fifth most in Harvard history, 120 behind the school’s single-season rushing record, held by Clifton Dawson ’07. 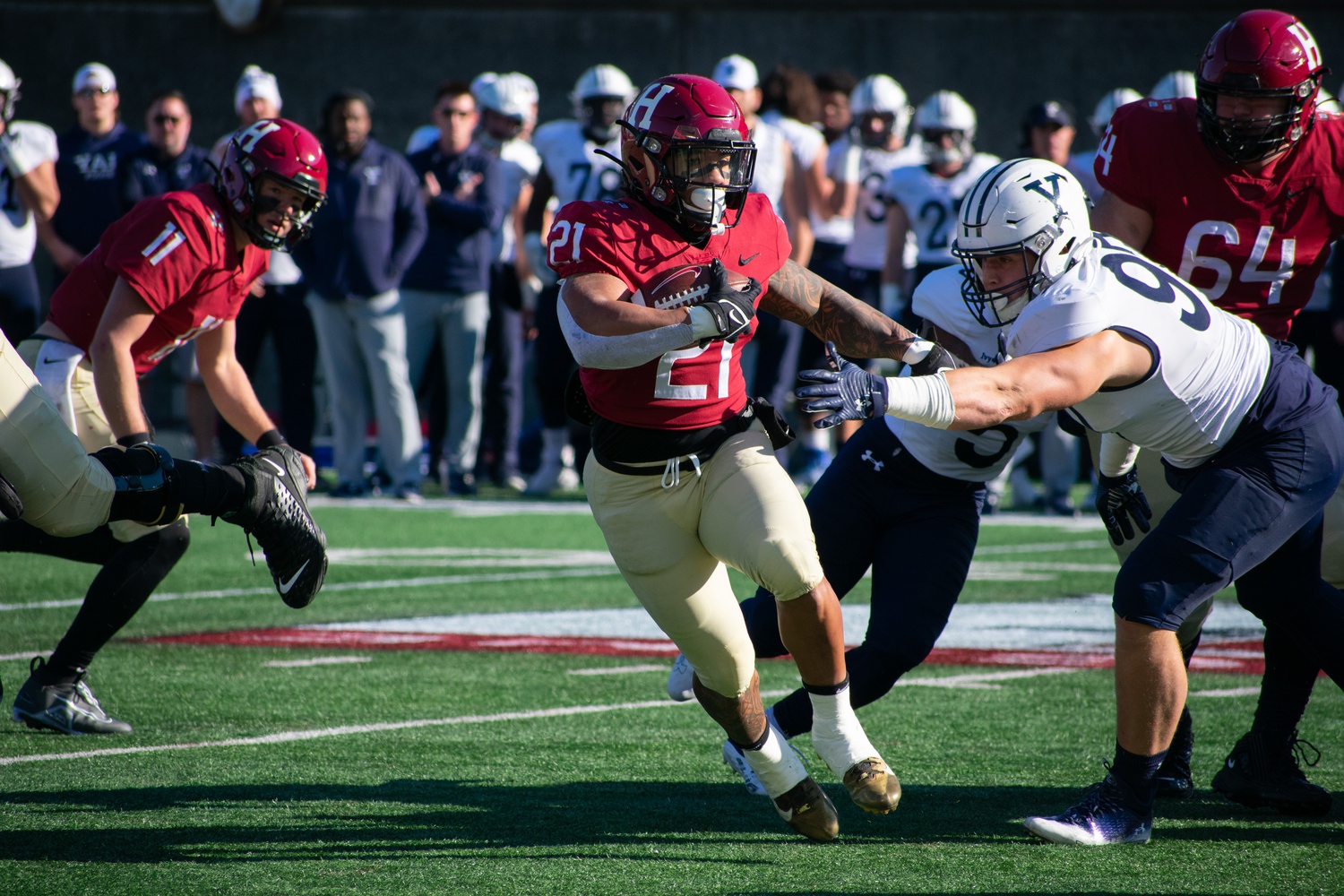 Senior running back Aidan Borguet looks to make a cut after receiving a first-half handoff from senior quarterback Charlie Dean. It was a tough finish to his brilliant Harvard career, as he was held to 62 yards on his 18 carries. By Julian J. Giordano
Advertisement

With Borguet mostly neutralized and the offense’s most dynamic wideout, senior Kym Wimberly, out with an arm injury that he suffered in the Crimson’s victory over Penn last week, Harvard’s two touchdowns came from sophomore wideout Scott Woods II and Neville. The 64-yard catch-and-run was Woods’ second touchdown of the season, after snagging one in the 35-28 victory over Cornell on Oct. 7. The five-foot-eight speedster, who is known for his shiftiness in returning punts, caught the screen pass from Dean at the line of scrimmage, burst through a hole in the defense, and saw nothing but green ahead of him.

Neville’s touchdown, which came 90 seconds into the fourth quarter and gave Harvard its only lead of the game, was his fourth of the season. Neville, who was a hero in the Crimson’s dramatic victory in 2021, broke out this season during the clash in Ithaca, N.Y., when he reeled in three catches and the first score of his career. On his scoring catch on Saturday, the six-foot-four tight end from Williamsburg, Va., got behind the defense, earning at least five yards of separation and waiting for Dean’s pass to land in his hands, upon which he waltzed into the end zone. Although the ball was slightly underthrown, it was still good enough for the touchdown, giving Harvard fans some fleeting hope.

But it was not to be, because as open as Neville was on his touchdown, Yale tight end Jackson Hawes might have gotten even more separation on his go-ahead catch with six minutes, 29 seconds left in the game. After a slow, methodical drive brought the Bulldogs into the red zone, the Crimson managed to get pressure on Grooms on second and nine from the Harvard 16, but the quarterback slithered out of the pocket and kept his eyes downfield, eventually lobbing it short to Hawes, who took it for 11 yards for an improbable first down. Then, after Pitsenberger got stuffed for no gain, Grooms again bought time in the pocket, allowing Hawes to shake his defender and make a sprawling catch, crashing to the turf with his team suddenly up by five. Although Grooms nearly got sacked on the ensuing two-point conversion attempt, the momentum had shifted.

The seven-minute, seven-second drive was indicative of a larger trend: Reno’s ability to control the clock and keep his defense off the field. Overall, the Bulldogs dominated time of possession, holding the ball for 40 minutes, 27 seconds throughout the contest. Continuing a season-long trend of late-down struggles, Harvard converted just two of its 12 third-down opportunities and allowed Yale to earn a fresh set of downs on more than a third of its tries. Because of its poor performance on third down, defensive coordinator Scott Larkee ’99’s unit was on the field for longer than in any other game this season. 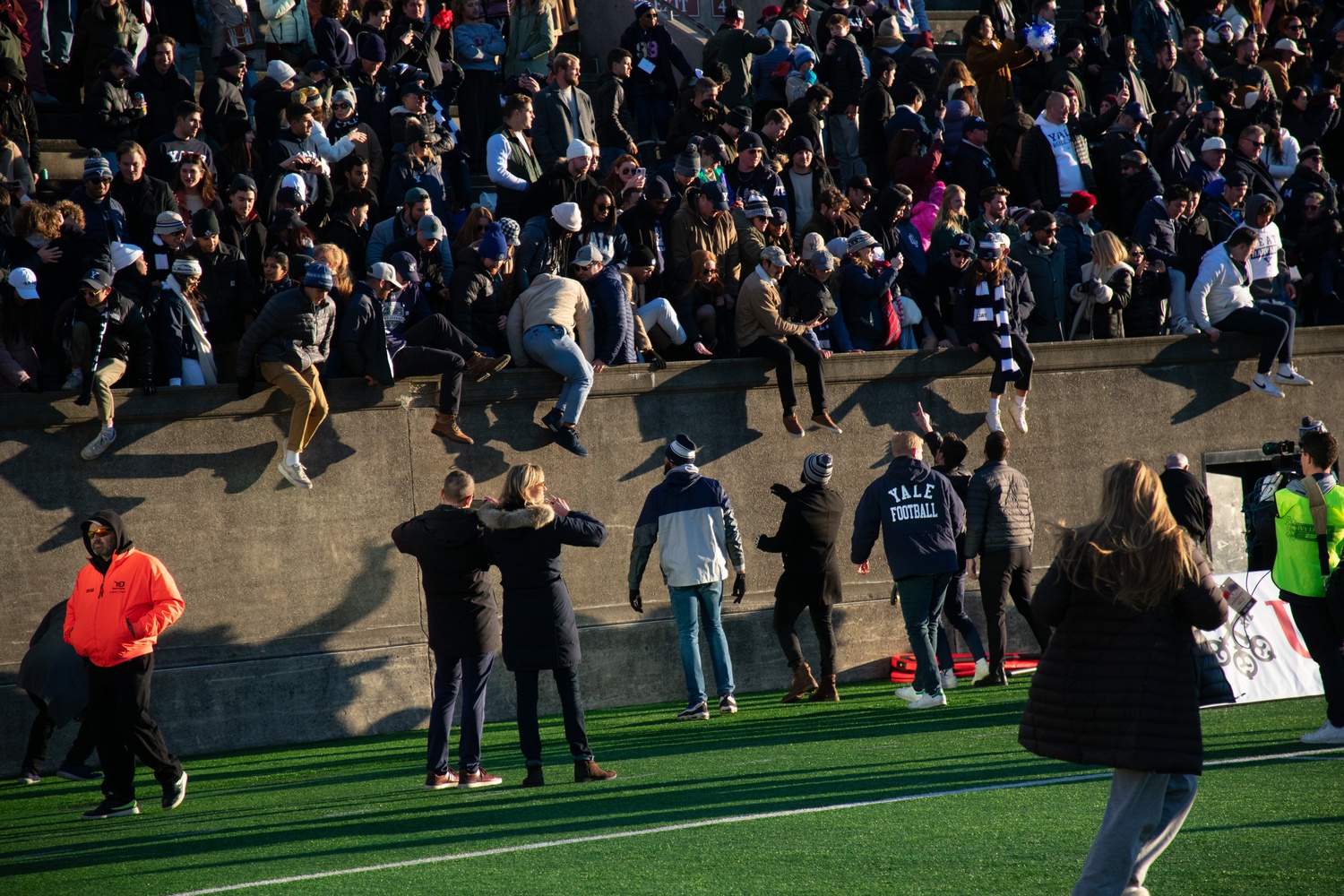 Yale fans leap over the walls onto the field at Harvard Stadium. After crimson-clad supporters flooded the field at the Yale Bowl after last year's incredible victory, Bulldogs fans returned the favor on Saturday. By Julian J. Giordano

With the victory, Yale extended its lead in the series to 69-61-8 and earned its 28th win since The Game became an official Ivy League competition in 1956. It was also the Bulldogs’ fifth win since the turn of the century and their ninth over Murphy, who fell just short of achieving his 10th Ivy League title. Prior to 2015, his previous longest title drought was four years — from 1997 to 2001 — but now the streak will extend to at least eight.

Saturday’s loss marked the final game for a strong class of graduating seniors, who each made a significant impact for Harvard over their four tumultuous years on campus. This year’s cohort, which includes stars such as Borguet, Wimberly, and Jones, spearheaded a successful revitalization of the football program after its only losing record of the 21st century in 2019 and the cancellation of the 2020 season due to the Covid-19 pandemic. Over the past two seasons, the Crimson has gone 15-5 despite starting three different quarterbacks over the 20 games.

“It’s a brotherhood that has been formed this year,” Borguet said. “The guys fought. They fought to the very end, the entire season. That’s a culture thing. That’s a team thing. And that’s something that lives on from team to team.”

“The character of the team really developed to the spirit of Harvard football,” Jones said. “I remember my freshman year, just seeing the caliber of guys and how bought-in and invested they were to this team. There’s been ebbs and flows to that, but I feel like it’s returning to that same level of everyone really buying into this program.”