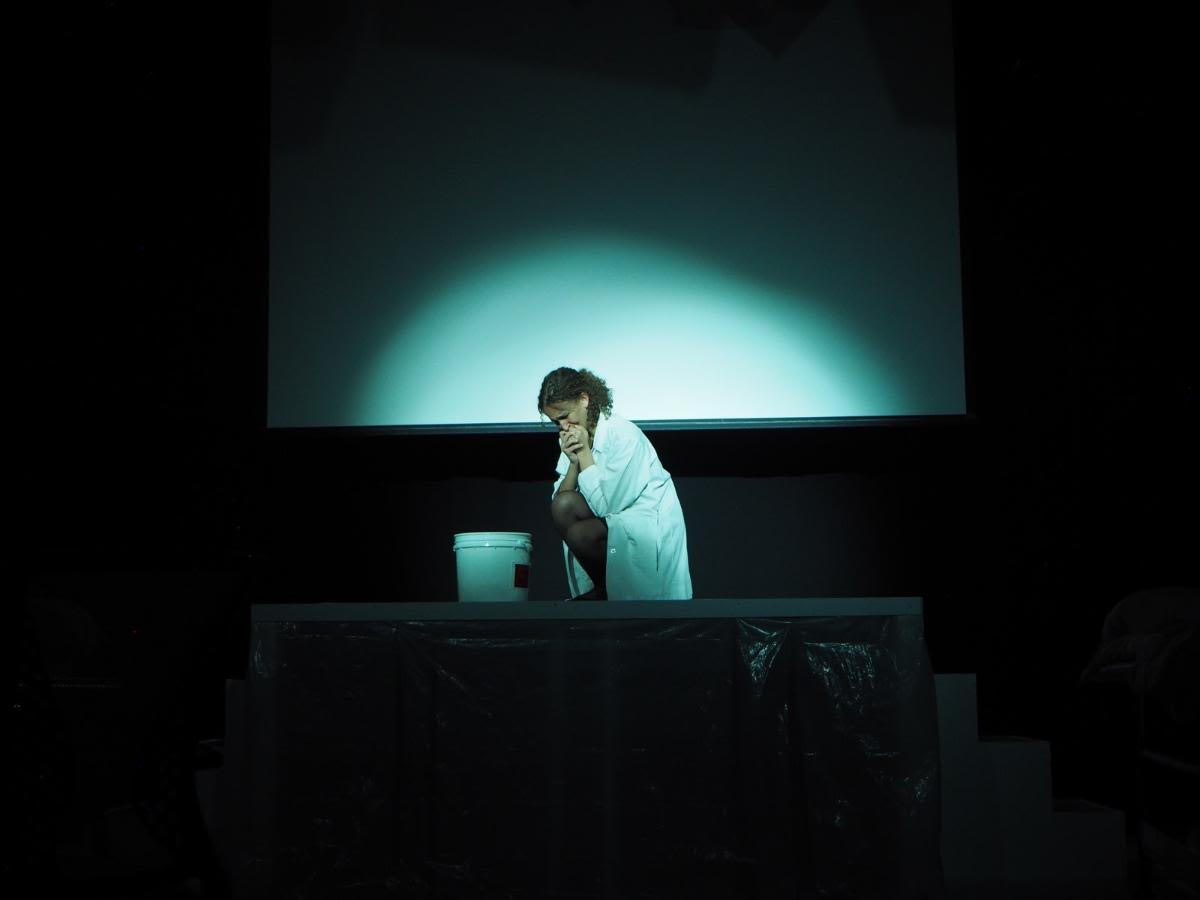 It should come as no surprise that “The Effect,” running from Nov. 10 through Nov. 13, is turning the Ex at the Loeb Drama Center from a stage into a literal hospital ward. After all, if there is a guiding principle behind the show, it is the unity of vision: A bold pursuit of realism and emotion on stage.

“The Effect” is a 2012 play written by the British playwright Lucy Prebble, who domestically is perhaps best known as one of the writers and executive producers for HBO’s “Succession.” At its core, it’s a simple story. Tristan (Robbie S. Owen ’25) and Connie (Tia A. KwanBock ’25), two volunteers in the clinical trial for an antidepressant drug, fall in love and begin to wonder if the feeling is real or a side effect of the medication. Meanwhile, the trial’s overseer, Dr. Lorna James (Sophie M. Garrigus ’25) tries to grapple with the trial’s ethics and her past relationship with her colleague, Dr. Toby Sealey (Benjamin H. Crawford ’25). All to the tune of a completely original score composed by Kaia B. Berman Peters ’23-’24.

“It's a really beautiful, moving piece, and I think it's just a type of theater that we need more of on Harvard's campus,” said Matthew W. Cole ’24, the show’s hair and makeup designer.

The quality is in no small part due to the strength of what Garrigus called “hyperrealistic dialogue and characters.”

“It's such a gift to get to be subtle on stage,” Garrigus added.

“It’s two parallel love affairs,” Owen said. “The show runs in parallel all the time. A lot of that's done by genius directing … [things] come back later on in the show, but with different changes of dynamics.”

The parallel storylines and the changes of dynamics highlight one of “The Effect”’s crucial facets: Under a veneer of simplicity lies a surprising technical, narrative, and emotional complexity.

“It's a very intimate show in many ways: Pure raw emotion, actual intimacy, actual breakdowns. There's all kinds of things that go on,” Crawford said.

Co-director Mira S. Alpers ’24 shares the sentiment. “It puts you in a position where you just have to hold something and grapple with it,” she said.

The show’s diminutive cast of just four might suggest an equally small production team. But the show’s behind-the-scenes hide the same complexity as the story.

“People who come to see the show might think… it's not some crazy huge theater set. They might be fooled into believing that there was not as big of a team behind it, but this is such a technically ambitious show and there's a lot of people working to make it happen,” Cole said.

There’s a reason why the amount of work on the side of the production team can be hard to see: Their aim, and the end result, was a minimalistic set design. “The best thing I can do is just not distract from the artistic vision that's surrounding the rest of the show,” Cole said.

This quality-over-quantity approach results in a great attention to the tiniest details — all the way down to the three cans of Canada Dry Ginger Ale standing on a shelf of a hospital tray — that contributes to a sense of authenticity.

“The white sterility of the floor, the platform, the beds, all of it really works together in a cohesive way that I think really allows a lot of creativity while still maintaining a focus on the realism of the hospital setting,” said lighting designer Joshua G. Caven ’25.

The set design works in unison with the show’s venue — the rather compact Loeb Ex — to create, in the words of Kyra S. Siegel ’25, the show’s co-director, an “immersive experience.”’

“We wanted it to feel like it was simultaneously people being watched in a really scary way because they're being experimented on, but also feeling like the audience and the performers are connected in a way that makes it feel like there is no separation, that there is no performance,” Siegel said.

“The Effect”’s emphasis on reality and creating an engrossing, believable experience is no accident.

“I do things that are intimate and I'm interested in one thing, and that's the complexity of interpersonal relationships,” Alpers said.

And so, when last March the two decided to produce a play together, the choice was not hard. “We knew we wanted to do something small. And this play in particular stood out to me, not just because the themes are really interesting, but because I think Lucy Prebble is just a master of dialogue,” Alpers said.

Now, courtesy of Alpers, Siegel, and the rest of the team, the show with all of its realism and masterful dialogue has a chance to shine at a Harvard stage.