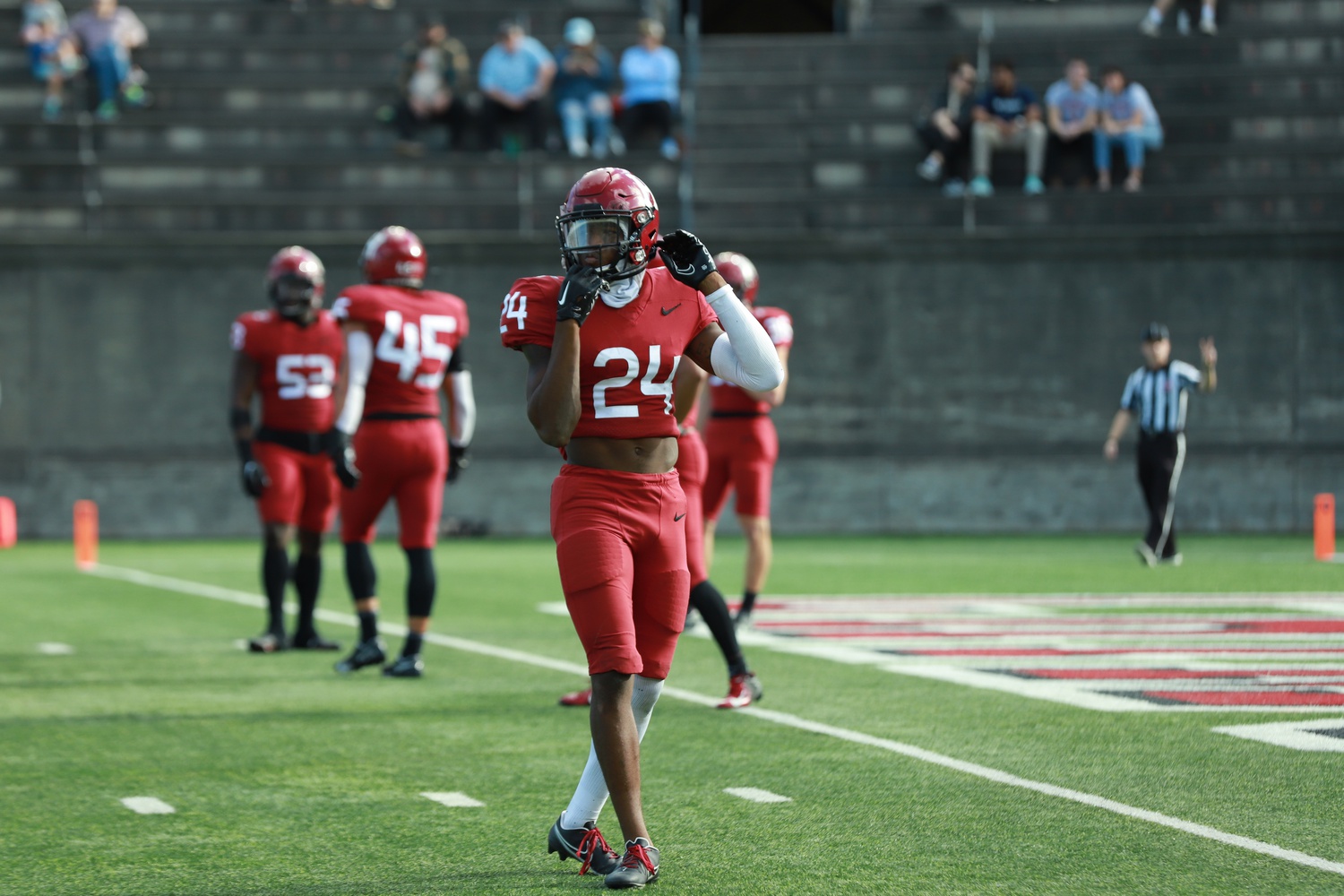 Senior defensive back Khalil Dawsey adjusts his helmet during the 21-20 loss to Columbia last Saturday. Dawsey and the secondary have been porous this season, but found some momentum last weekend, intercepting Caden Bell thrice. By Angela Dela Cruz
By Griffin Wong, Crimson Staff Writer

In just over a week, Cambridge will light up with the energy of thousands of fans as the 138th Playing of The Game comes to Harvard Stadium. But despite students preparing to host their Yale counterparts and the campus starting to get ready for the festivities, the Harvard football team (5-3, 3-2) is focused on another mission: keeping its slim Ivy League championship hopes alive on a Saturday trip to the City of Brotherly Love. In its first trip to Philadelphia since 2018, the Crimson will face off against a much-improved Penn squad (7-1, 4-1), needing two wins and two Princeton losses to share a conference championship with the Tigers. Harvard and the Quakers will kick off at 1 p.m. at Franklin Field.

The Quakers defense played a major role in its 28-21 victory last weekend over Cornell in Ithaca, N.Y., intercepting Big Red signal-caller Jameson Wang twice and sacking him thrice. The unit covered up for a relatively shaky performance by sophomore quarterback Aidan Sayin, who completed just eight of his 18 passes for 137 yards, two touchdowns and a pick. Holding a two-touchdown fourth quarter lead and with Cornell operating a four-down offense, the Penn defense pulled together three consecutive fourth down stops to thwart the Big Red’s hopes at a comeback. By the time Wang finally broke through with a nine-yard touchdown pass to wideout Thomas Glover, the win had already been sealed.

Meanwhile, the Crimson lost a gut-wrenching, nerve-racking battle against previously winless Columbia last Saturday. The Lions blocked three of senior kicker Jonah Lipel’s field goal attempts in a 21-20 victory, the latter a 42-yard attempt that grazed a Columbia defender’s fingertips before clanking into the left upright and falling harmlessly to the turf. In his return from an injury that held him out of the 28-13 victory over Dartmouth on Oct. 29, senior quarterback Charlie Dean was solid, completing 17 of his 29 passes for 220 yards, one touchdown, and one interception – which came on a tipped ball.

In last year’s 23-7 win at Harvard Stadium, senior running back Aidan Borguet played a limited role as the backup to star Aaron Shampklin ’22, carrying the ball eight times for 29 yards. But with Shampklin having graduated – he spent training camp with the NFL’s Dallas Cowboys – Borguet is the feature back of the Harvard offense and is a front-runner for Ivy League Offensive Player of the Year. Last Saturday, as part of a 23-carry, 108-yard, one-touchdown performance, he crossed the 1,000-yard plateau for the season, becoming the eighth Crimson back ever to hit that mark. With 299 yards in his final two games, he could surpass Clifton Dawson ’07 as the single-season rushing leader in Harvard history.

“It’s really fun to work with [Borguet]. That guy does not go down with the first hit,” Elliott said. “He makes it easy on us. He kind of sets up linebackers to make the double teams a little bit easier, and this offensive line has gelled week in and week out. Our communication is top notch, and everyone feels extremely confident lining up against anybody.”

But Borguet cannot do it alone against a Quakers defense that has allowed merely 86.6 yards per game on the ground, a rate which ties for sixth in the nation, a few yards better than the Crimson’s seventh-placed unit. He will have backfield help in senior running back Sone Ntoh, who is from Macungie, Pa., an hour’s drive from Philadelphia. Additionally, Dean’s arsenal appears as if it will be more fully stocked on Saturday. Despite Kym Wimberly missing the Columbia contest with a left ankle injury, head coach Tim Murphy had expressed confidence that his star senior wide receiver would not be out for the rest of the season. Also, sophomore wide receiver Ledger Hatch, who also sat out against Columbia, practiced on Wednesday. In their absence, Dean leaned heavily on first-year receiver Cooper Barkate, who hit the century mark with 102 receiving yards and could factor into offensive coordinator Mickey Fein’s plans on Saturday. Junior tight end Tyler Neville will likely also see significant attention in the passing game against Penn. 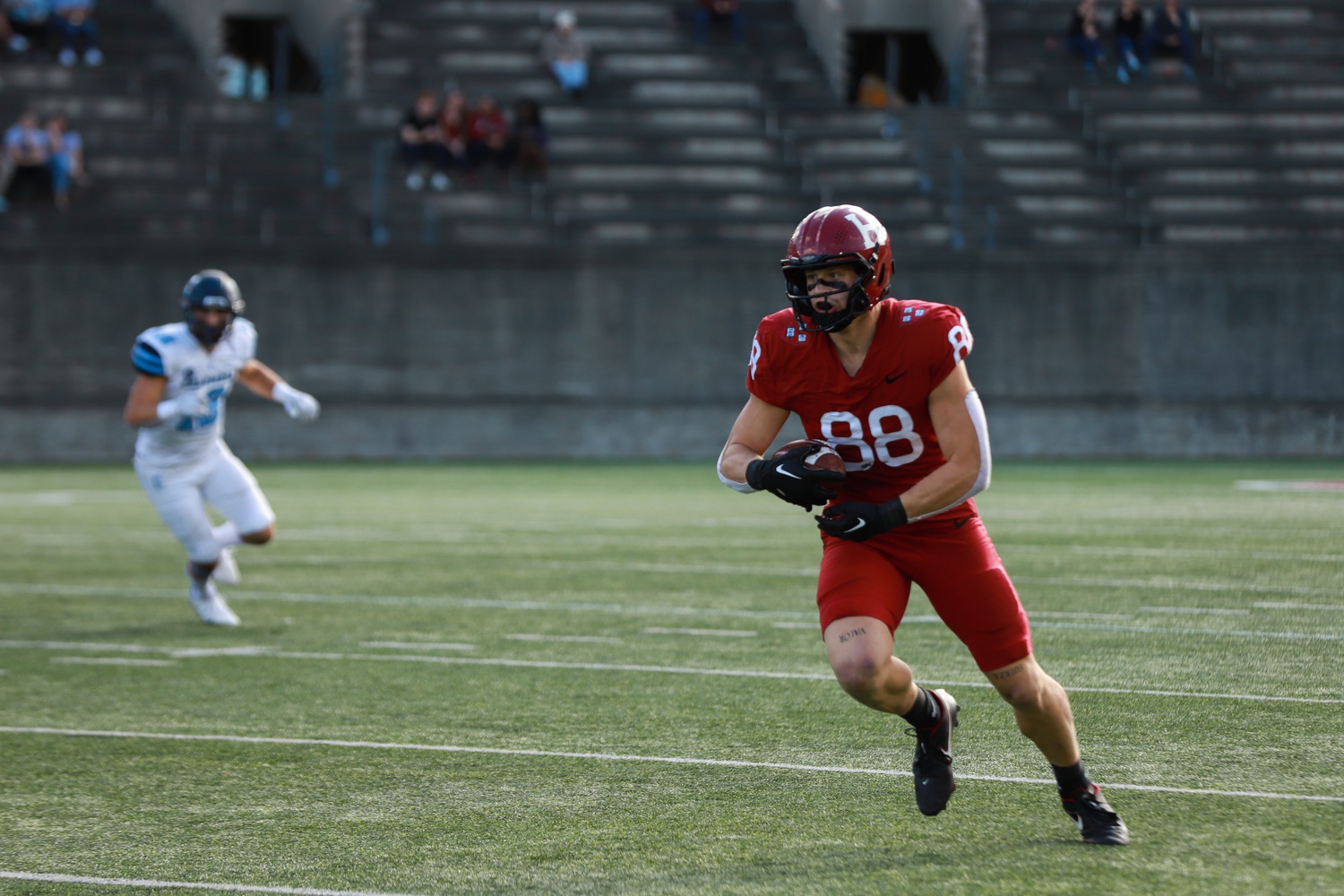 Junior tight end Tyler Neville runs along the left sideline during last Saturday's 21-20 loss to Columbia. Neville figures to play a major role in the passing game in Philadelphia, especially given the Quakers' strong rush defense. By Angela Dela Cruz

Harvard fans can expect Dean to air the ball out frequently in order to dissect the Quakers’ defense, which pairs an elite rushing unit with middle-of-the-pack aerial coverage. The Penn secondary allows 221 yards per game, which ranks 61st in the nation. While the Quakers boast returning players like senior defensive back Jaden Key, who recorded four pass breakups against the Crimson last November, and senior linebacker Jonathan Melvin, who had 2.5 tackles for a loss, the keys to victory for Penn work out of the three-point stance. The elite Quakers defensive line has notched 29 sacks so far this season, good for third-best in the nation. Interior defensive linemen Noah Slackman and Micah Morris have made major strides this year, racking up 4.5 and 2.5 sacks, respectively. They are joined on the outside by Jake Heimlicher, whose seven sacks rank first in the Ivy League. Penn’s front four will be the biggest challenge that Harvard’s eighth-ranked offensive line has faced this season. However, Elliott expressed confidence that his unit was up to the task.

“They blitzed us a lot last year. We expect the same from them this year,” he explained. “A lot of twist games and everything like that, so we just have to be able to get our hips under us, be able to land our hands, and just communicate with all the twists and all the pressure.”

Another key for the Crimson will be converting on third downs, an area where the offense has struggled this season. In the loss to Columbia, Dean’s offense earned a fresh set of downs just twice in 13 opportunities, continuing a season-long trend of dismal performances in clutch situations. After being an elite third-down team on both sides of the ball in 2021, Harvard ranks just 77th on offense, converting 36.5 percent of its tries, and 71st on defense, allowing opposing units to pass the line to gain 41.8 percent of the time. The Crimson’s relative ineptitude on third down has led to it controlling the ball for just 29 minutes each game, which ranks 76th in the Football Championship Series (FCS). Meanwhile, the Quakers allow conversions on just 34.2 percent of opportunities, the third-stingiest rate in the Ivy League.

“We definitely have to do a better job than we did last week,” Elliott said. “We have to be extremely, extremely good on first down, getting at least four, getting half on second down, and we talk about it in all of our unit meetings before Friday, just bucking up and trying to get in those third-and-short, third-and-medium situations.” 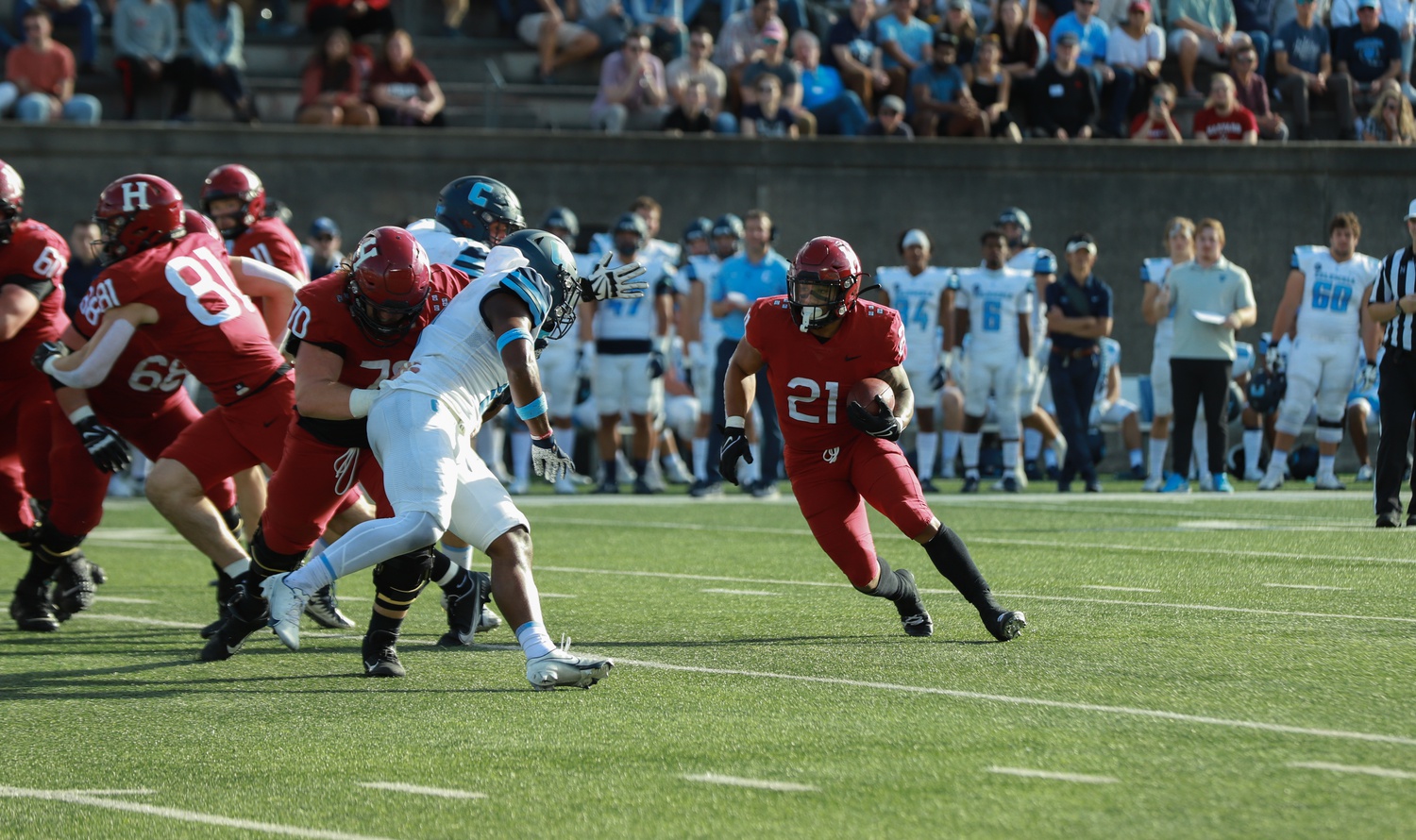 Senior running back Aidan Borguet takes a carry during the 21-20 loss to Columbia last Saturday. With 299 yards in his final two games, Borguet would become the single-season rushing leader in Harvard history. By Angela Dela Cruz

The Crimson’s chances will hinge on the defense as well. After bringing down Jack Zergiotis nine times in the season-opening, 28-21 win over Merrimack, Harvard’s defensive line has slowed down its pace, adding 16 sacks in the seven games since. Senior defensive lineman Nate Leskovec has not taken down the quarterback behind the line since his 4.5-sack performance in the season opener, which earned him FCS Defensive Player of the Week. However, with playmakers like Leskovec, junior defensive tackle Thor Griffith, and senior defensive lineman and captain Truman Jones, the Crimson still presents a challenge for opposing offenses. The secondary appeared to hit its stride in the third quarter of the Lions contest, too, intercepting Caden Bell three times in the frame. The takeaways were just the team’s fifth, sixth, and seventh of the season, but on Saturday, it will hope for better results against Sayin, who it intercepted three times in last year’s win.

“I thought we did a good job forcing some turnovers,” said senior defensive back James Herring on positive takeaways from the defense’s performance in the loss to Columbia. “We had a handful of takeaways. I was pretty proud of how we played for most of the game.”

The Penn signal-caller has improved tremendously since the last time Harvard fans saw him. After tossing seven picks in his five starts last season, Sayin has given the ball away just six times in the first eight games of his sophomore campaign. Overall, he has completed more than 62 percent of his passes for 1,871 yards and 15 touchdowns, adding two more scores on the ground. He is buoyed on offense by running back Trey Flowers, who has turned his 94 carries into 460 yards and seven touchdowns on the ground. Given the Crimson’s strong rushing defense, Sayin will likely take to the air frequently on Saturday, meaning the Quakers’ impressive slate of playmakers in the receiving game will play a major factor in the game. Junior wide receiver Joshua Casilli has been Sayin’s top target so far this year, hauling in 48 passes for 461 yards and four touchdowns. He is supplemented by senior Rory Starkey, Jr., who has added 36 catches, 303 yards, and three scores. Last year at Harvard Stadium, Starkey caught seven passes for 61 yards. Reining in Casilli and Starkey on Saturday will be pivotal for a defense that allowed Holy Cross receiver Jalen Coker and Princeton’s Andrei Iosivas to put up 164 and 176 yards, respectively.

“He’s taken strides,” Herring said of Sayin. “He’s really improving as a Division I quarterback. I have respect for him.”

With the four best teams in the Ancient Eight battling each other in the final two weeks of the season - in addition to Harvard’s contest against 4-1 Yale on Nov. 19, the Tigers will take on Yale on Saturday before concluding its season against Penn – the end of the 2022 campaign will be nothing if not dramatic. For the Crimson, Saturday’s game will mean everything. Not only would Harvard record its first undefeated season on the road since 2015, a win might keep it in contention for a conference title, depending on Princeton’s result in New Haven, Conn.