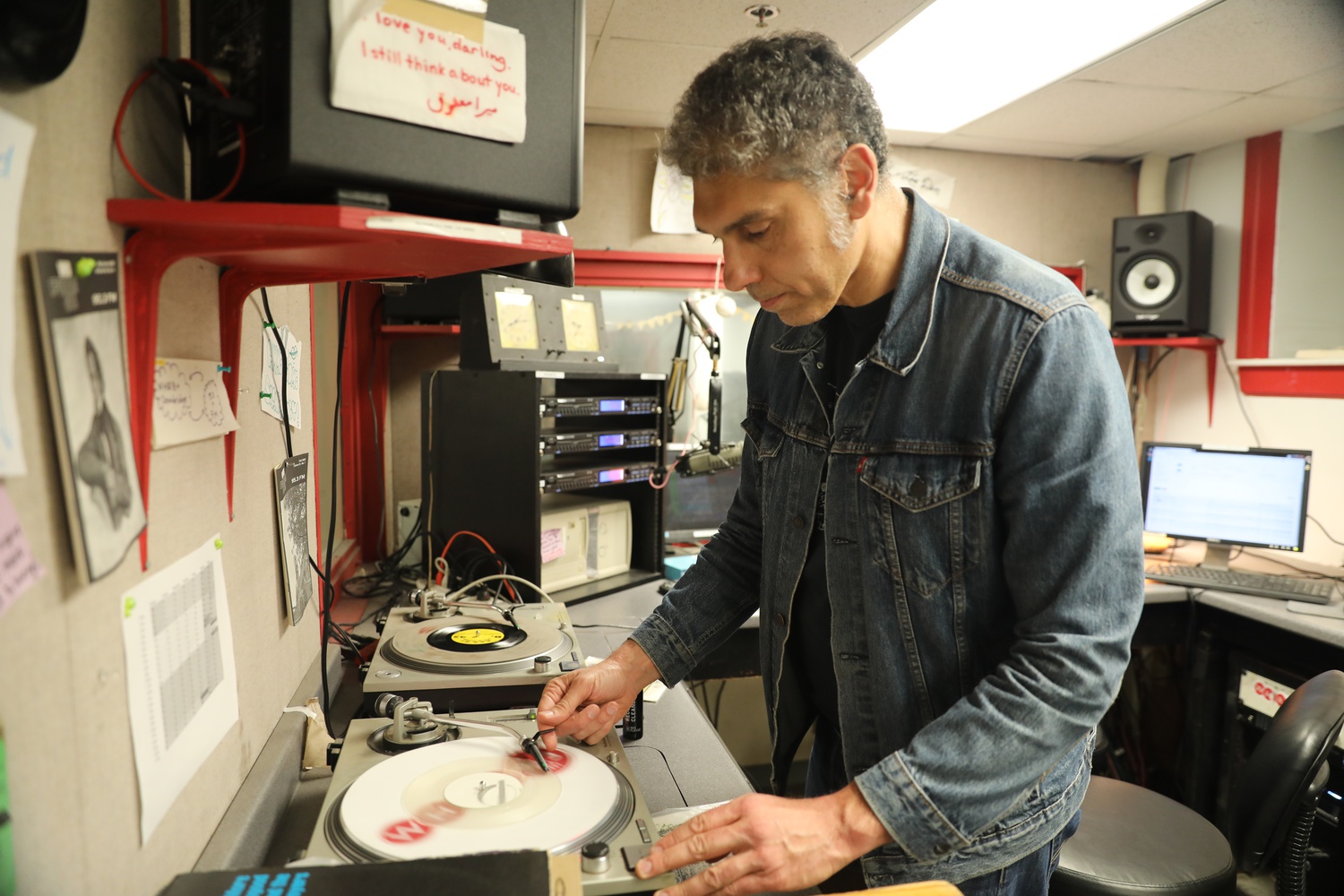 Constantinos “Dinos” Mekios is an associate professor of Philosophy at Stonehill College by day and a DJ for WHRB radio at night. By Marina Qu
Advertisement
Advertisement

Constantinos “Dinos” Mekios, a 51-year-old resident DJ at WHRB, is a philosophy professor at Stonehill College by day; by night, he selects a record to play out of his collection of over 55,000.
By Sazi Bongwe and Sam E. Weil

If you tune into WHRB radio on any Tuesday evening, you might catch a Greek-accented, gravelly voice welcoming you to “Our Little Rendez-vous.” From 10 to 11 p.m., you’ll hear an eclectic mix of songs usually dating from the ’60s, softly crackling from a steady rotation of 45 rpm records.

The man behind the voice, dropping the needle on one of an endless supply of carefully chosen records, is none other than Constantinos “Dinos” Mekios, a 51-year-old resident DJ at WHRB. By day, he’s a philosophy professor at Stonehill College; by night, he selects a record to play out of his collection of over 55,000. Mekios has hosted his show at WHRB for longer than most of the student DJs have been alive. He chuckles, “At this point, after 23 years, people assume that I’m part of the furniture of the station.”

While growing up in Athens — only exposed to his father’s classical collection and the songs played on the state-controlled radio — Mekios believed he “didn’t like music at all.” It was only when he turned 17 and his uncle introduced him to records ranging from Jimi Hendrix and The Stooges to the German krautrock band CAN that he realized, “Oh, it’s not just the music in the top 20 … there’s something else that seems to have more urgency, and I like it.”

Mekios began putting his pocket money together to buy obscure records by bands from around the world — once, he bought a suitcase’s worth of records from South Africa. Thus began his lifelong passion for collecting records, though he’s reluctant to call himself a “collector.”

However, the hobby that absorbed most of young Mekios’s energy was not record collecting but basketball. At 19, he moved to New York to attend Stony Brook University in pursuit of his dream to play basketball at a high level. Mekios was a biochemistry major planning to go to medical school until he took a philosophy course to fulfill a requirement; he was hooked and decided to study both. But the scientist in him was stubborn, and after graduating from Stony Brook, he enrolled in a graduate program in genetics at Columbia University.

While at Columbia, Mekios developed his musical taste by attending shows throughout New York City, which he says “completely changed my perspective about music.” He bought records at every show and spent his free time exploring record stores around the city.

While his love for music grew, his passion for research had not. “I realized that I didn’t have the temperament or the patience to do something super specialized,” he says. He was initially drawn to genetics by questions regarding human nature, but he realized he could engage with those questions more deeply through the study of philosophy rather than “spend[ing] every day in the lab doing a lot of technical work and focusing on very, very narrow details about some pathway in a cell.” Mekios transferred to a graduate program at Boston University to get a Ph.D. in the philosophy of biology.

During the summer of 2000, a year into his studies at BU, Mekios ran into a friend from New York who offered to hook him up with a show on WHRB. When Mekios went on air for the first time, he grew hyper-aware of his thick accent and felt overwhelmed by the mechanics of operating the studio.

“I made every mistake one could make,” he laughs. He had dead air for more than a minute and played songs at the wrong speed. But listeners began calling in, appreciating his unique taste. “I guess people were more focused on what I was playing,” he says, smiling. “To hell with whether I speak English well or not; it’s fine. It’s more about the things that I play.”

Soon enough, Mekios became a regular at the studio. Now, he lends his wisdom to each new generation of DJs, teaching them how to use the equipment. “You see how people develop over the time they are at the station, both their tastes and how they develop their leadership skills,” he says He equally enjoys his work teaching philosophy at Stonehill College in Easton, Massachusetts, which he’s been doing since the fall of 2006. 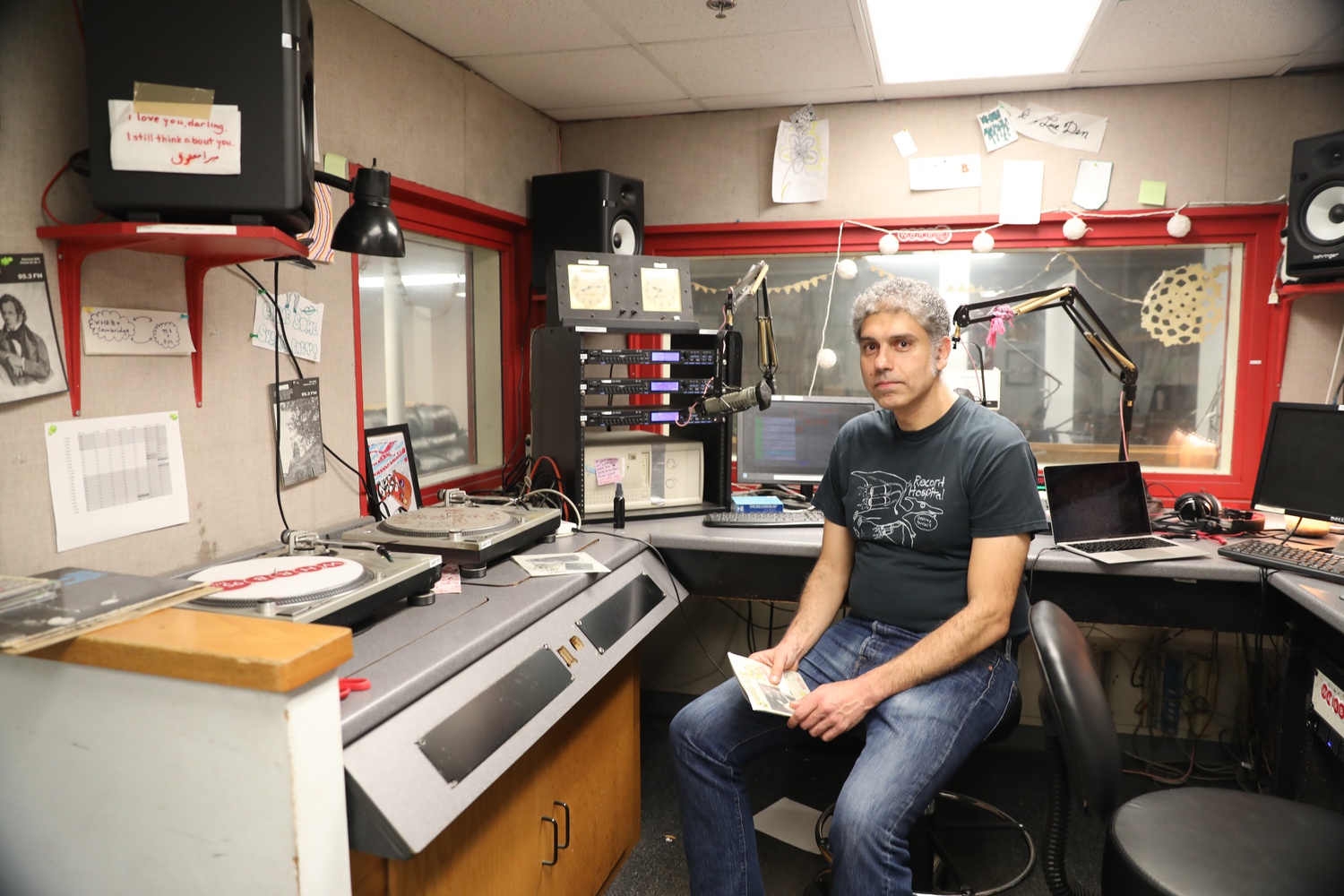 Dinos has been hosting his radio show Our By Marina Qu

The same questions about human nature that drew him to his profession also pertain to how he thinks about music. “What is it that shapes us into what we are? What is it that we find meaningful, and what not?” he asks. “What is genius? What is taste, what’s good taste? What does that mean to people? How does it change?”

If there’s one thing that hasn’t changed, it’s that Mekios cares deeply about the quality of the show for his listeners. “I really have to confess that I really don't like to intellectualize a lot of this,” he says, growing unexpectedly uncomfortable in the philosophical turn our conversion took. “I feel like it takes the fun out of the music part. So in the show, I play things that make sense to me because there is some kind of connection in my mind with the things I like to play, but I feel like if I try to comment too much, it usually falls apart.”

When we ask what more he wants in life, his answer is simple: “I don't have enough records,” he laughs, gesturing to the stacks of records behind him in his apartment. “I’m just kidding. That’s probably my demise.”

— Magazine writer Sam E. Weil can be reached at sam.weil@thecrimson.com.