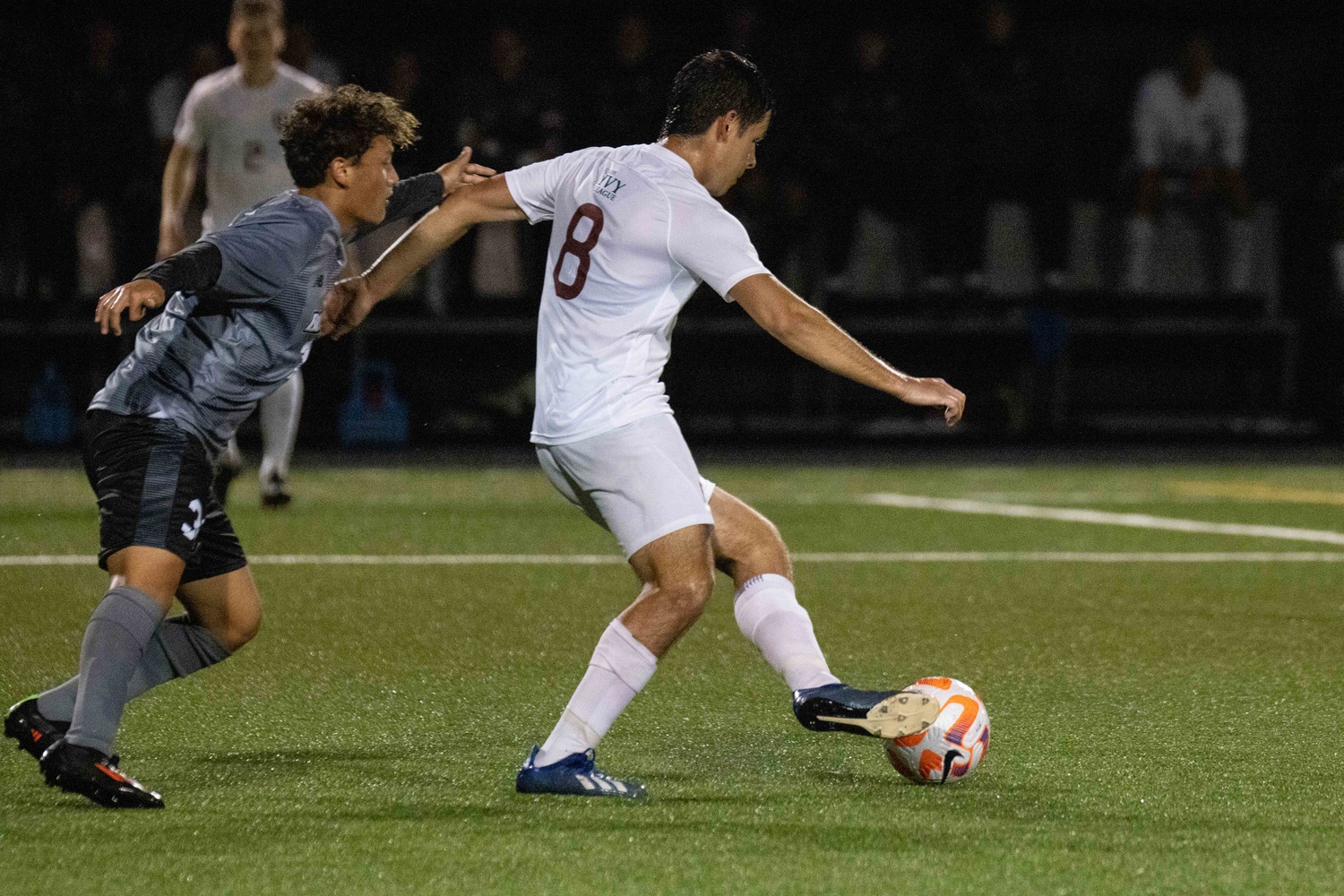 Sophomore midfielder Marko Isakovic dribbles past a defender in a 2-1 victory over Bryant on Sept. 6, 2022. Isakovic notched his third assist of the season in Saturday's loss to Cornell. By Dylan J. Goodman
By Maddie B. Barkate, Crimson Staff Writer

The Harvard men’s soccer team (5-4-1, 0-1) dropped a close contest to the Cornell Big Red in its Ivy League opener, but bounced back quickly a few days later by shutting out its crosstown rival, the Boston University Terriers. Although the loss was undeniably a disappointing start to its Ivy League campaign, the Crimson was undeterred and performed well against the Terriers.

The Crimson rallied after the weekend loss to face the Terriers on their home field in its final non-conference road game of the season. In a low-scoring game, the Harvard defense did its job, holding BU to no shots on net for the entire 90 minutes. Junior forward Ale Gutierrez netted the game-winner in the 25th minute, which was all the Crimson needed to emerge victorious.

Gutierrez’s goal was a team effort. Junior defender James Fahmy played a give-and-go back to junior midfielder Kaoru Fujiwara, who passed the ball to a waiting Gutierrez. From 18 yards out, Gutierrez drove it home in the bottom left corner to give Harvard the lead.

Tuesday night was a game of firsts for the Crimson, with first-year goalkeeper Cullen MacNeil notching the first collegiate shutout of his career, and giving Fujiwara the first point of his college career. Other Harvard players were also able to add to their stats, with Fahmy earning his third assist and Gutierrez his third goal.

This game moved the Crimson to 28-16-8 all-time against the Terriers.

Crimson sophomores Sam Bjarnson and Alessandro Arlotti put on a show in Ithaca this past Saturday, but ultimately it was not enough to overcome an early deficit against the Big Red.

It was a record day for Bjarnson, who netted his first career goal, which came off of sophomore Marko Isakovic’s third assist of the season. Arlotti continued his strong start, as it was the second straight game he had scored a goal and he now has 10 points on the year. Junior Willem Ebbinge assisted Arlotti’s goal, bringing his tally up to a team-high five assists on the season. 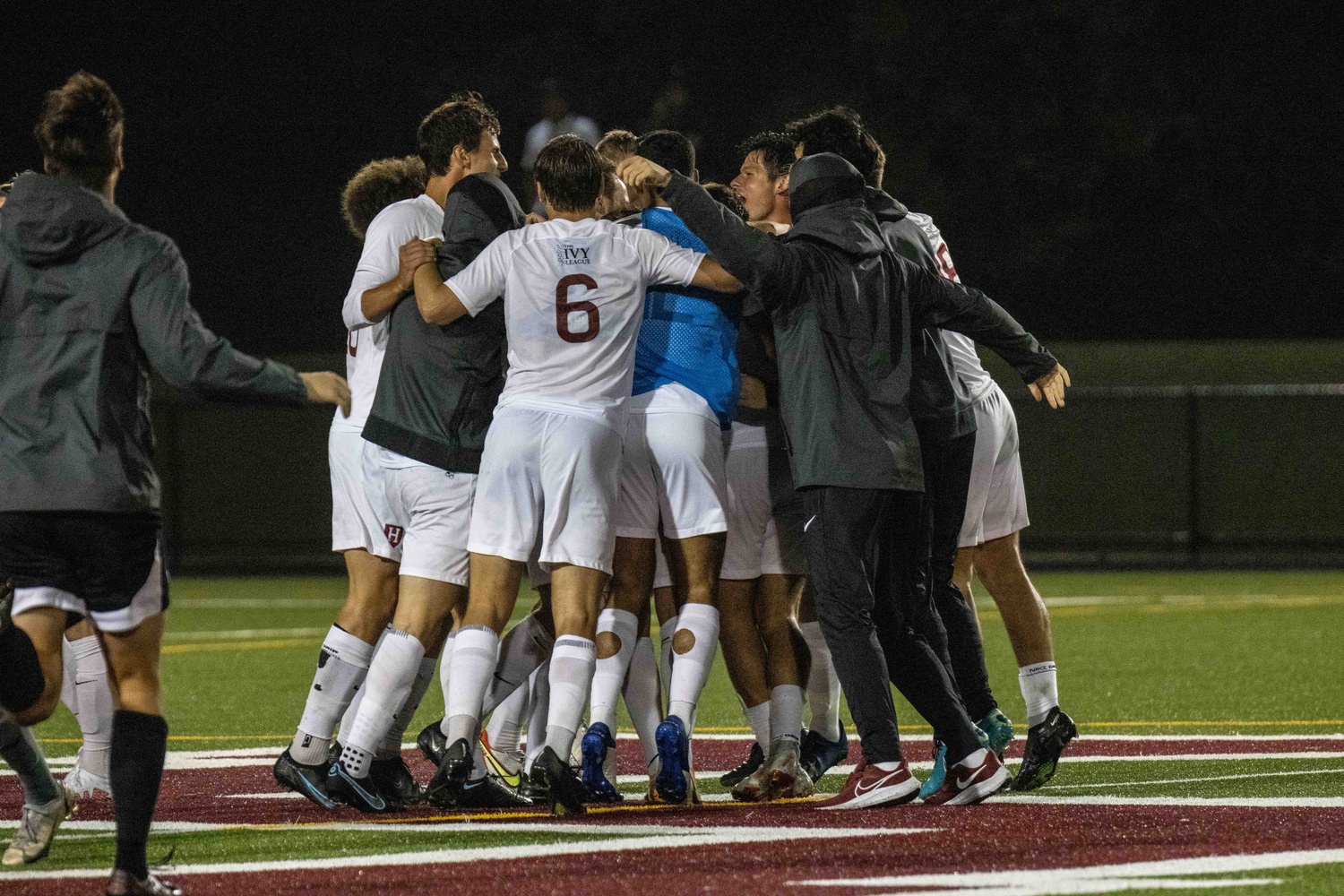 Harvard men's soccer celebrates after a 2-1 victory on Sept. 6, 2022, against Bryant. After a strong 2021 campaign, the team is off to a solid start again a season later. By Dylan J. Goodman

The Big Red took an early lead, with Cornell fifth-year Emeka Eneli scoring first in the 34th minute. Harvard equalized in the 44th, as Isakovic drove a free kick into the box, where Bjarnson headed it into the net.

The game continued scoreless for almost 30 minutes until Big Red senior Brandon Morales put Cornell up 2-1 in the 70th. This would not be the last time Morales struck against the Crimson, as in the 79th minute, Big Red freshman Ben Goulding finished a ball Morales drove into the penalty area, putting the pressure on Harvard to come up with answers. True to form, Arlotti found one, cutting the margin to one in the 81st minute off an Ebbinge corner. However, it was not enough for the win, and the Crimson ultimately fell 3-2 to the Big Red.

Despite the loss, many players still impressed. After his performance at Cornell, Ebbinge leads the team with 11 points, and has recorded a point in seven of the team’s games this season. Arlotti follows close behind, with his goal this weekend marking his 10th point of the season. Junior defender Nik White and sophomore defender Jan Riecke both played all 90 minutes for Harvard, building on their stability and success from the previous season.

Harvard is looking to improve on its 2021 season, which was their strongest in years with an overall record of 8-5-3, and 3-2-2 in conference. To continue building on its success, the Crimson will need to rely on last year’s leaders: Ebbinge, Arlotti, and senior forward Martin Vician.

Arlotti led the team in 2021 with 25 points, with Vician and Ebbinge following close behind with 19 and 14 points, respectively. For his efforts last season, Arlotti earned the Ivy League Rookie of the Year title and First Team All-Ivy accolades. Arlotti was joined on the first team by Ebbinge, with Vician earning second team honors, and Riecke receiving an honorable mention nod.

However, it is not only Harvard’s goal-scorers that the Crimson will need to make an impact for the team this year. White and Riecke regularly play the entire game, and Riecke has played all 900 minutes this year. Both defenders are coming off of strong 2021 campaigns and are looking to build on that success through the rest of this season.

The Crimson will return to action in its second Ivy League matchup against Columbia on Saturday, Oct. 8 at home.