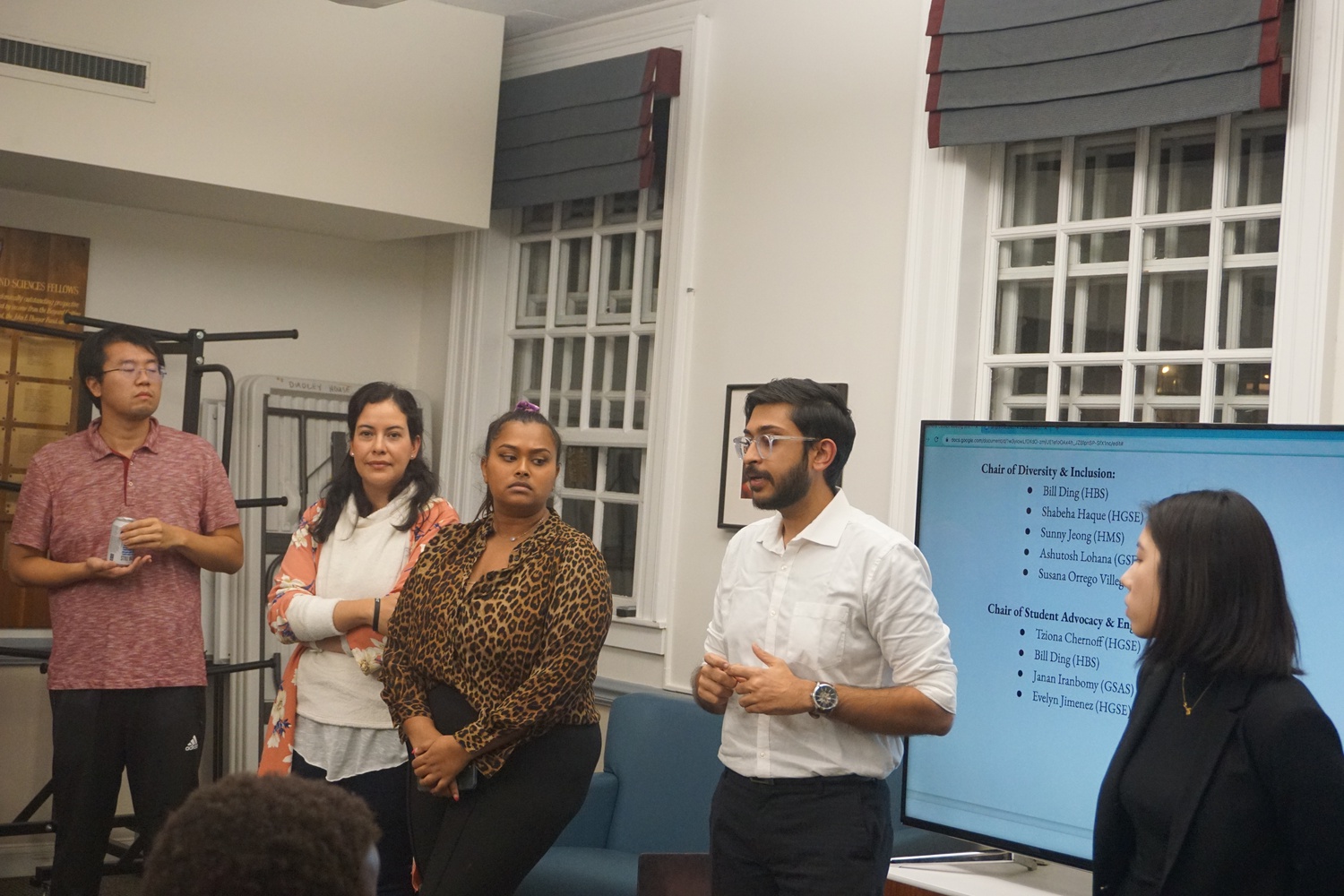 The Harvard Graduate Council met this week to elect part of its board. By Courtesy of Carlos A. Gonzalez Sierra
By Paton D. Roberts and Srija Vem, Crimson Staff Writers

The Harvard Graduate Council elected nine students from across the University’s 12 graduate schools to fill executive board positions this week.

Some of the positions were left open from the Council’s spring elections, in which several roles were left unfilled despite multiple candidates running. Five board members were elected on Monday night and the remaining four positions were filled during a subsequent meeting on Thursday.

At Monday’s meeting, Harvard Graduate School of Education student Ulziijargal Sukhbaatar was elected chair of operations, a role responsible for an array of administrative and logistical tasks. Sukhbaatar said in her candidate speech she is eager to learn “other leadership skills and become a successful chair of operation.”

Sukhbaatar will be the first HGSE student to serve as operations chair in at least a decade, she said.

Azwa Nayeem, another HGSE student, was elected chair of governance, which interprets the provisions of the GSE constitution and bylaws. The body’s current president, Carlos A. Gonzalez Sierra, previously held the role.

Running uncontested, Gabriel O. Pagan, a student at Harvard’s Graduate School of Arts and Sciences and Harvard Medical School, was elected chair of information. Pagan will be responsible for overseeing the design and maintenance of the HGC’s website and archives.

Shreya Verma, an HGSE student, was elected co-chair of programming. She will work to organize social events alongside Prabhroop K. Chawla, a Harvard Divinity School student who was elected in the spring. Seven students ran for the programming co-chair position, but only three were present to deliver candidate speeches on Monday.

“I just love organizing events because the energy and the vibe around that is very exciting,” Verma said on Monday.

In the final round of Monday night elections, Harvard Graduate School of Design student Cayden Z. A. Arja was elected chair of marketing, a role responsible for bolstering the council’s visibility across the University.

On Thursday, the Council elected its chairs of academic affairs, student well-being, diversity and inclusion, and student advocacy and engagement.

HGSE student Shabeha Haque was elected as the chair of diversity and inclusion after a seven-way race.

Haque said in her candidate speech that she hopes to increase transparency and support for international students, who she said are sometimes disconnected from campus happenings.

“During my term, I hope to solve these problems by creating more transparency about events happening on campus, also creating D&I office hours to invite students of the general grad school body to discuss ideas and programming, and also create educational events regarding international school students,” she said.

In the final election on Thursday, GSAS student Janan Iranbomy was elected chair of student advocacy and engagement after a runoff.

Sierra, the council’s president, wrote in an emailed statement that he, alongside other graduate students, is “eager to reignite the campus.”

“Now with a complete board, HGC can be a stronger vehicle to improve graduate student life at Harvard,” he wrote.

The board members will serve in their respective positions into the spring semester, when another round of elections will be held.