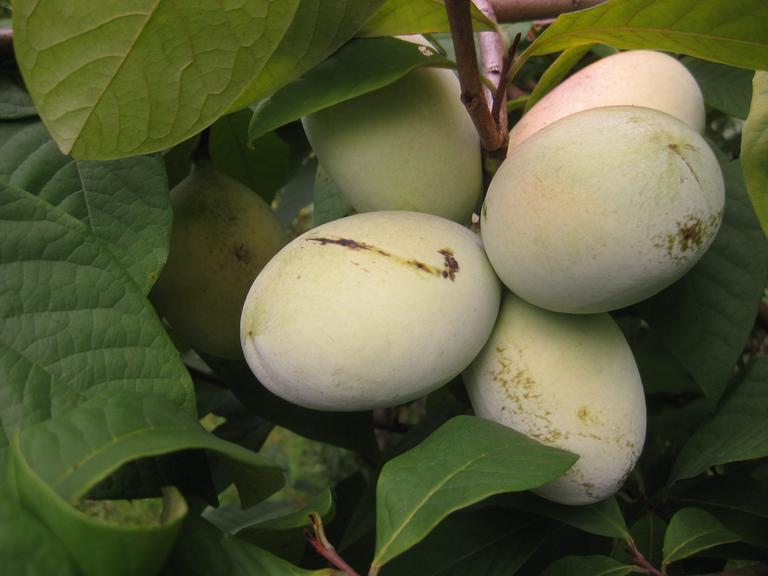 Pawpaws have grown in North America for around 56 million years, but recently, they've been in high demand and short supply. By Courtesy of Theodore B. Ruegsegger
Advertisement
Advertisement

Pawpaws to the People!

Each year, more people are trying pawpaws for the first time and falling in love with their tropical taste and vogue mysteriousness. But the pawpaw isn’t new, and it’s not going anywhere.
By Sarah W. Faber

Abbie C. White planted her first pawpaw tree in 1989 on a whim, as part of a larger project to turn her property into an edible landscape. She liked its glossy, deep green foliage, and that its fruits grew well without the use of pesticides. Today, the “Pawpaw Queen” of Hardwick, Mass., attracts customers from as far away as Quebec City — and most of her fruit is already reserved for the season.

Cambridge locals might recognize pawpaws from Clover Food Lab, which sells the fruit for one to two weeks each year. This year, Clover is selling boxes of 3 pawpaws for $25 — limited to two boxes per customer. “It’s October and we just got our first shipment of paw paws from our secretive paw paw farmers,” reads the blurb on the site, urging customers to preorder pawpaws two weeks in advance.

Asimina triloba, known commonly as pawpaws, are a fruit native to North America. They’re about the size of an apple, with a thick, black-spotted, light green skin, a grainy and custardy flesh, and seeds the size of quarters. They taste like a cross between a banana and a mango. While pawpaws have been in Massachusetts for millions of years and have historically served as an important foraged food source, the past few years have seen a sharp increase in both demand for the fruit and excitement surrounding its native Northeast origins, sustainable reputation, and unique taste.

After White successfully raised her first pawpaw tree, she planted a few more varieties: Shenandoah, Susquehanna, and Rapanoic. Within just two years, the Shenandoah trees were loaded with fruit. Thus began White’s career as “The Pawpaw Queen,” a moniker she picked up from her colleagues at Worcester Polytechnic Institute, to whom she would bring pawpaws in the early years. She has since left WPI, but the title has stuck.

In 2007, White started selling pawpaws at her local farmers market.. “I want to help my community thrive in agriculture,” says White. “We have a lot of farmers in my area, so if people are interested in the pawpaw fruit, why don’t they come to the farmers market and help all of our vendors?”

In recent years, White has started receiving requests to reserve pawpaws starting in July and August. This year, by early September, most of White’s fruit had been reserved.

“There’s so many people that want trees, they want fruit, and I keep updating my website — but it seems the more I try to say ‘there’s a lot of demand,’ the more people want them,” White says.

Clover’s pawpaw grower wishes to remain secret to avoid the kind of high demand White is experiencing. At first, White found it funny that Clover’s supplier wished to remain anonymous, but she’s since grown sympathetic: “What I’ve been dealing with … I kind of miss the old days when nobody bothered me,” White says, laughing.

Each year, more people are trying pawpaws for the first time and falling in love with their tropical taste and vogue mysteriousness. But the pawpaw isn’t new, and it’s not going anywhere.

Pawpaws for the Planet 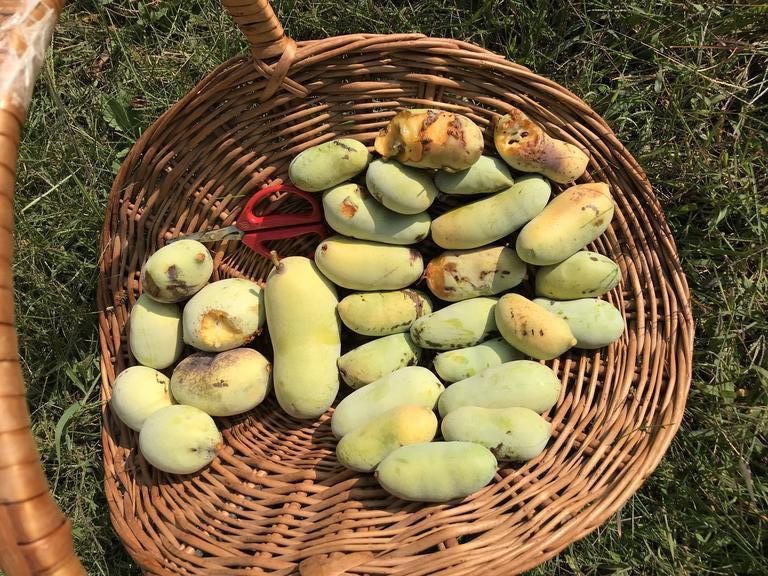 Archaeological evidence from sites ranging from Mississippi to New Jersey suggests pawpaws have been in North America for about 56 million years. Their seeds were dispersed by megafauna — giant ground sloths, wooly mammoths, saber-toothed tigers, and other large creatures that once roamed the area. Seeds have also been found at the earliest human settlements on the continent; after the megafauna went extinct, it was Native Americans across the continent who kept the pawpaw alive by spreading and planting its seeds by hand.

When SEAS Faculty Coordinator Anna V. Frej first read about the pawpaw, she was struck by the fruit’s foundation in both archaeology and sustainability. “I thought the pawpaws were the perfect catalyst to discuss ancient climate change and farming practices,” she says.

Pawpaws are considered to be one of the most sustainable fruits to grow for two main reasons: first, because they’re native to the Northeast, pawpaws are adapted to the climate and rarely require resources or succumb to disease; second, very few animal species alive today feed on pawpaws, so there is little need for farmers to use pesticides on their trees.

In 2017 and 2018, for her thesis at the Harvard Extension School, Frej explored the feasibility of pawpaw cultivation in New England from the perspective of sustainable agriculture. Her project took her to pawpaw sites around the Northeast and as far as Albany, Ohio, for the 19th Annual Ohio Pawpaw Festival.

“I hypothesize that yes, it could be [feasible] within the New England region,” Frej says. “I think that with climate change and warming, this is going to be an ideal location for the potential to start a pawpaw farm.”

According to Frej’s calculations, within the next 30 years, nearly all of New England, among other regions where the pawpaw currently thrives, will be the ideal climate for pawpaws to grow.

Frej notes that pawpaws can be a profitable crop if farmers grow them in conjunction with other staples. “Some years they have great years and some years they don’t,” Frej says. “No one just grows one thing.”

Methods of pawpaw cultivation vary depending on geographic area and scale. Chris Chmeil, a longtime pawpaw farmer and founder of the Ohio Pawpaw Festival, raises pawpaws alongside goats. His farm, Integration Acres, employs silvopastoralism — a method that integrates grazing livestock with forests. Goats don’t eat pawpaws, so they can be raised in pawpaw groves, grazing the land around the trees, which reduces growers’ need to clear land. Goats also fertilize the soil with their feces, which attracts flies and beetles that pollinate the pawpaws.

Like Frej, Chmeil became interested in pawpaws from a sustainable agriculture point of view. He calls himself an “ecopreneur of sorts.” After studying economic anthropology in college and graduating with a degree in sustainability, he wanted to create value out of the pawpaws that he saw rotting on the ground in Southeastern Ohio, where pawpaw trees are abundant.

“What I thought I brought to the table of the pawpaw was wanting to preserve it,” Chmeil says, “and one of the challenges is its short shelf life and how crappy they wind up looking after they’re ripe.”

Integration Acres is one of the only growers to ship raw pawpaws and pawpaw trees in addition to prepared products such as pawpaw salsa, pawpaw jam, pawpaw salad dressing, and frozen pawpaw pulp. 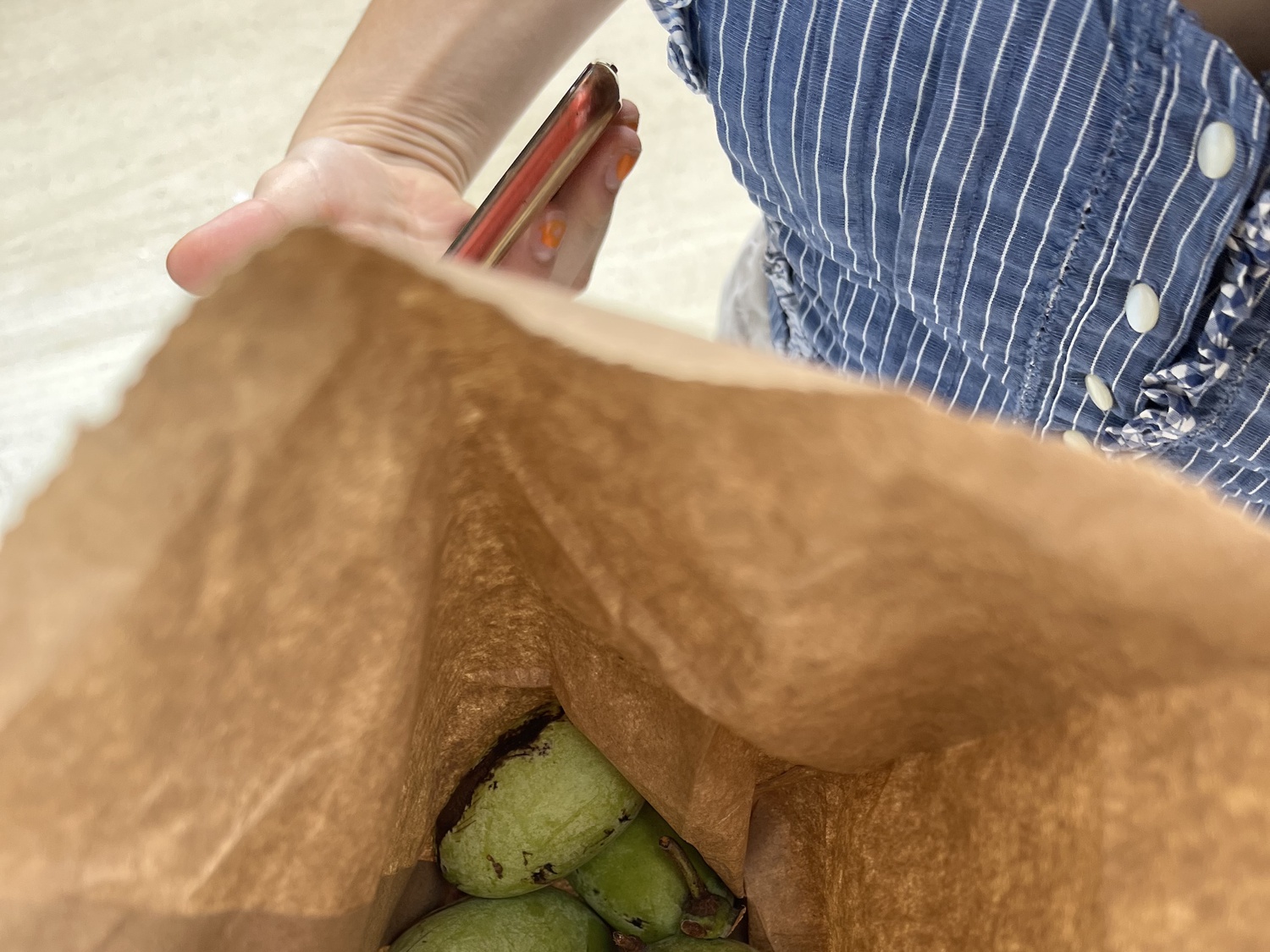 There are only a couple places in the Cambridge area to buy pawpaws, including The Mushroom Shop in Somerville and Clover Food Labs, which sells 3 fruits for $25. By Sarah W. Faber

Though never planted on a large-scale like other fruits, pawpaws have been present throughout American history. At one point during their expedition westward, explorers Meriwether Lewis and William Clark subsisted for three days on pawpaws alone. Thomas Jefferson sent pawpaw seeds to associates in Europe as an example of a uniquely American fruit. George Washington planted them at Mount Vernon.

But perhaps most importantly, pawpaw foraging has proven an important foodway for those without regular access to food supply. They’ve been foraged by people living in food deserts, enslaved people, people experiencing homelessness, and by the tribes who first cultivated them.

The pawpaw’s history as a vital food source stands in contrast to its current cult following. On one hand, you may find pawpaws on the ground in the woods. On the other hand, you can buy 3 of them from Clover for $25 (the price bears repeating).

Somewhere in between is The Mushroom Shop in Somerville, where owner Tyler M. Akabane sells pawpaws alongside locally foraged mushrooms. Last year, Akabane donated 50 percent of the sales from pawpaws to the Mashpee Wampanoag Tribe, writing to his Instagram followers: “This fruits occurrence [sic] in this region is largely thanks to indigenous stewardship … This fruit along with #ramps reminds me that we (or many of us) are on stolen land. And that while it may be very difficult to right the wrongs, we can make some steps to make things … less wrong?”

In his work with mushrooms, Akabane has seen a similar disconnect between those who forage to survive and those who are willing to pay higher costs for foraged foods as a delicacy. “It’s kind of the same thing — it can be very boujee in the restaurants, you can get a wild mushroom pasta that’s really expensive, but if you’re poor, it’s also free food,” he says.

For those looking to forage for pawpaws, Theodore B. Ruegsegger has made it easier. Ruegsegger has endeavored to restore the pawpaw in New England as much as he can. When he goes on hikes, he’ll plant half a dozen trees in a small circle so they grow into a thicket. So far, at least 40 of his trees around Massachusetts and Connecticut have sprouted.

“When the settlers — I hate that word, it’s like there was nobody settled here before — when the white settlers came in, they cleared all the fertile bottomland along rivers to make farms, and that’s where pawpaws like to grow, so they probably wiped out a lot of them,” Ruegsegger says, “So I’m giving ’em a little help getting back.”

As pawpaws have become more popular, more people are growing them at home. “I’m 62, and I’m having a lot of fun with this, but I will be at some point happy to reclaim my Sundays,” says White, laughing. “I’m excited that people are growing trees, and they’ll send me photos of their seedlings or flowers, and I’m like ‘yes, that’s wonderful!’”

For people interested in growing their own pawpaws, Ruegsegger has some advice: Take the seeds you have left over from your pawpaws in the fall. Find the right place to plant them — one that’s not too dry and has access to sun. Come back in spring. Over the winter, the seed will have prepared to sprout, and will send its first shoot up in May. You won’t see any green until August, though, as the seed makes its taproot, solidifying its place in the earth. Take note of your GPS coordinates. Check back in a few years. You may just have fruit.