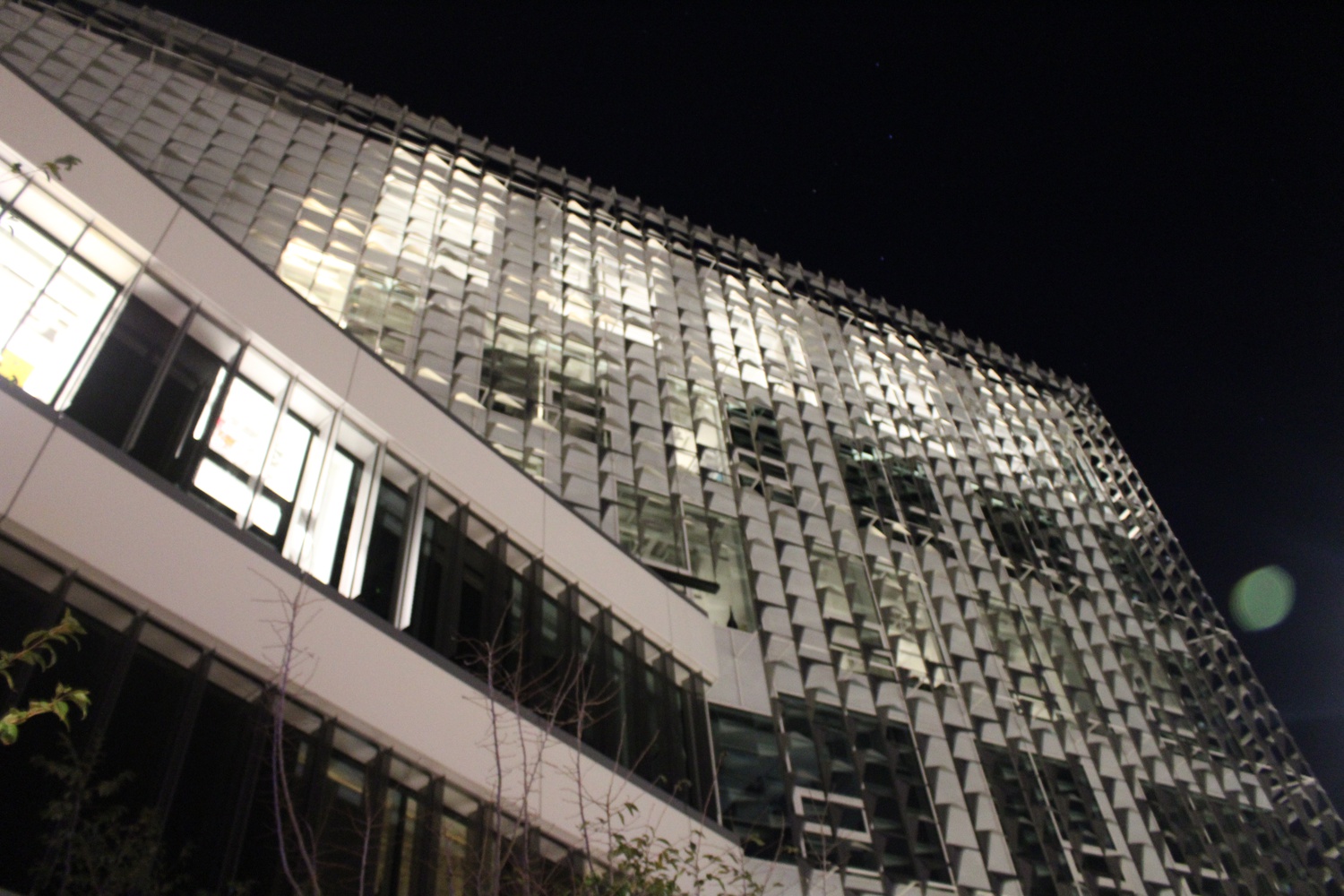 One Night at the SEC

I jumped at the idea of spending a night there — partly for the meme, partly for the lure of experiential reporting, and partly to feel more connected to the colossal construction I only ever visit for math class.
By Dina R. Zeldin

It was late on a Thursday and I was out of breath on a Bluebike, cruising across Weeks Bridge toward the Science and Engineering Complex. A night of sneaking around, looking for trouble in Harvard’s Allston bastion lay ahead of me.

The $1 billion, eight-story, 500,000-square-foot building, coldly abbreviated as SEC or “ess-ee-sea,” opened its doors to lectures and labs for the first time in the fall of 2021. Since its inception, it has been lauded for its energy-efficient features, its collaborative design, and its ultramodern amenities. As with the rest of Harvard’s developments in Allston, it has also drawn criticism for moving into existing neighborhoods. As students settled into its classrooms, offices, labs and makerspaces, rumors blossomed that some of them began to ditch the commute to and from Cambridge, instead creating a residence for themselves in the building.

It’s too convenient not to. Apparently, there are showers in the basement (true), a giant warehouse where you could skateboard (true, though I didn’t try), Peloton bikes (on the fifth floor, facing a glass wall), and pods for napping (I found benches instead). I jumped at the idea of spending a night there — partly for the meme, partly for the lure of experiential reporting, and partly to feel more connected to the colossal construction I only ever visit for math class. It seemed a good opportunity to hit up as much of this cornucopia as I could. Plus, I thought being inside one of the focal points of scientific innovation would activate a deeper level of my brain, allowing me to fly through all the homework I hadn’t finished earlier in the week. 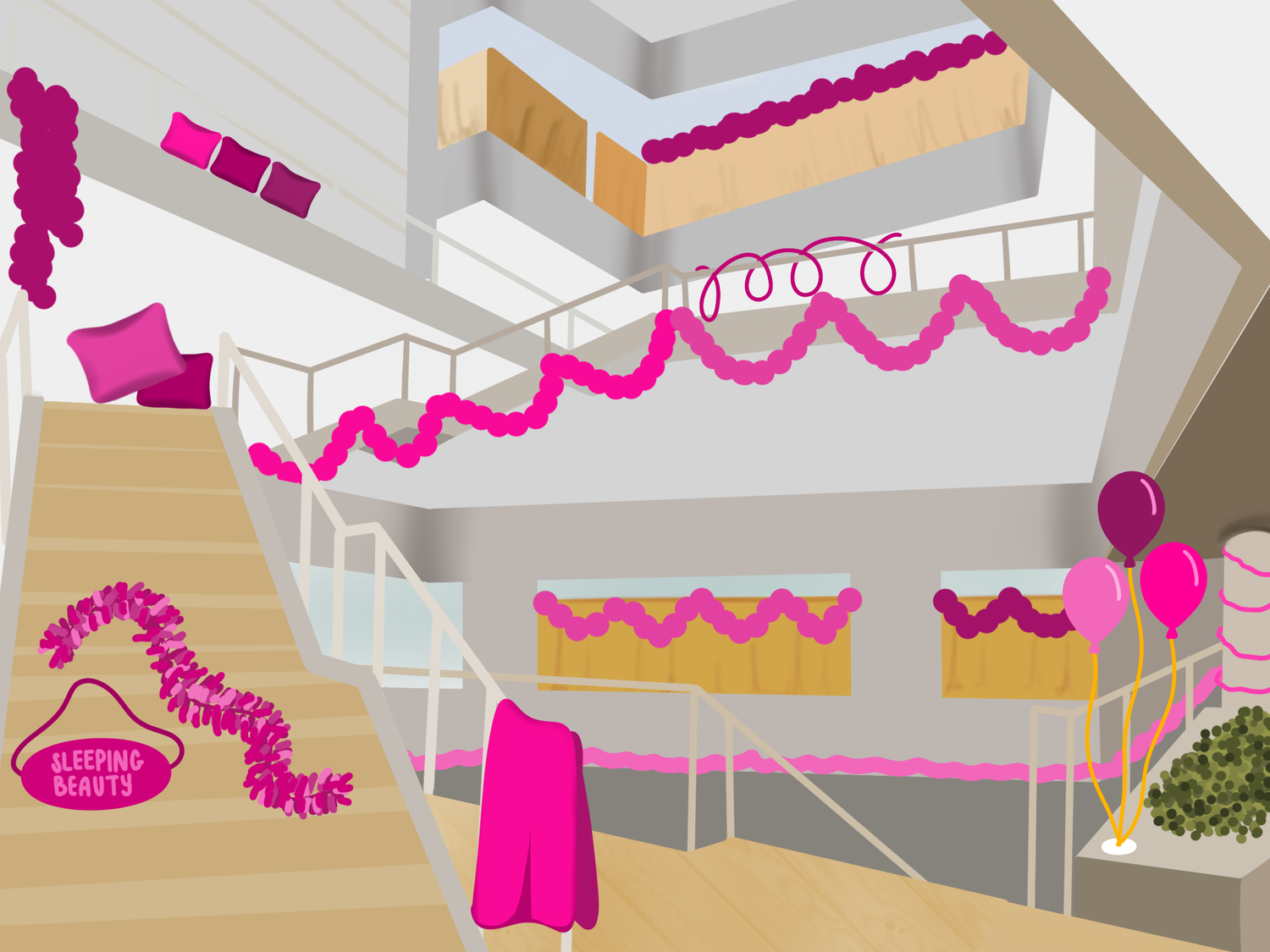 Trader Joe’s in Allston, just up the road from the SEC, is a familiar stop on my commute to class, and tonight was no different. I picked up grub — tomatoes, dried mango, and microwavable mac and cheese — in an attempt to make the industrial interior where I would be staying more homely. I imagined the other shoppers were hurrying home after a late night in the lab; the cashier said at this time of day, there were only stragglers.

Prior to this, I had only ever seen the SEC in the mornings when I arrived for class, squinting against the sunlight reflecting on its glass edifice and bouncing across its metal exoskeleton. At night, it has an eerie glow instead. No one batted an eye when I strolled in at a quarter past nine. I settled my groceries into the fridge of an open-concept kitchenette in the basement. Feeling slightly more comfortable — ah yes, my $1 billion home — I posted up in a study room. 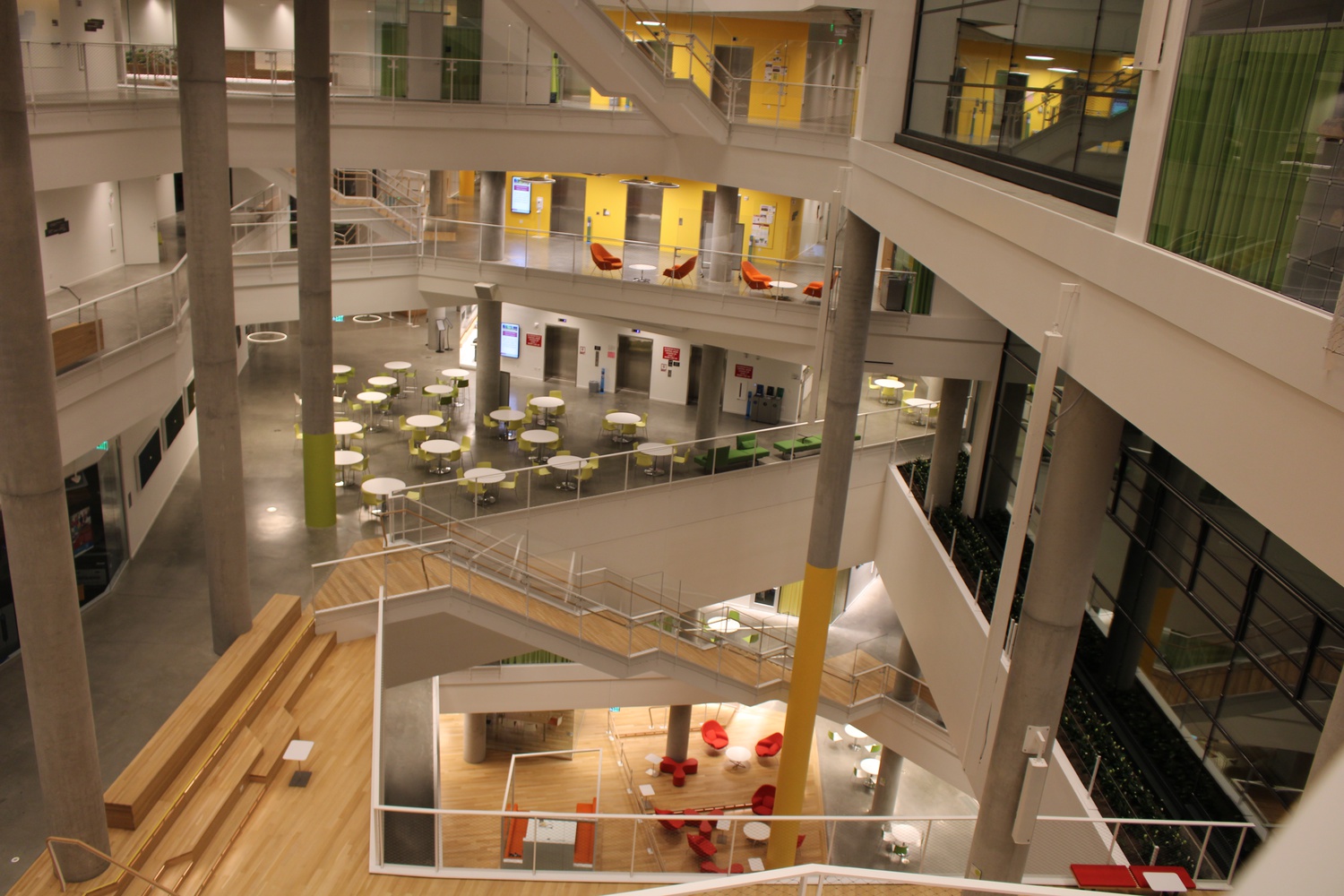 Over the next few hours, I worked on my pset. Around me, loose phrases of conversations and squeaks from shoes on clean tiles echoed through the atrium and down to the lower level where I was camped. The plaque on the glass of my study nook held a dedication to someone’s physics professor. This struck me as oddly quaint. In many of its design choices, the SEC nods to the history of engineering at Harvard; the beech saplings on the lawn are the same species as the ones that stand outside Pierce Hall, the former SEAS headquarters in Cambridge.

As part of its commitment to simulating storiedness, the SEC commissioned a kinetic art installation that hangs at the main entrance. The installation compiles digital silhouettes of every person who’s walked past, playing and replaying all the interactions it has observed since it was first plugged in, using tiny rotating tiles as pixels. On my first visit, the sudden whoosh of clicking and clacking tiles took me by surprise as I walked past. Tonight, though the SEC stood empty, I still heard the tiles click into shapes of people passing in and out, ad infinitum.

Eventually, the only other sound was the whir of air conditioners as the building heaved in anticipation of the next morning, when PIs and professors would trickle in. I wondered if anyone could smell the fake cheese of my dinner wafting.

Ultimately, I gave up on my homework. Overtaken by SEC wanderlust, I began to explore, starting in the basement until I made my way to the sixth floor.

Even though I was simply walking through the halls, the ceiling — an exposed web of metal pipes — made me feel as if I was a woefully ignorant car mechanic in the underbelly of a machine. I am not an engineer, so I don’t know what flows through the pipes, nor why, nor how, and seeing so many woven together was discomfiting. My dad had tried to explain these things: why the car battery could be charged just by driving far; why the dryer doesn’t work when it snows; why plugging in everything at once would blow the fuse. The SEC’s exposed pipes forces you to ask these questions, to realize that engineering abounds. Its persistence feels like mockery — I prefer to be ignorant to these inner workings.

The SEC is unimaginably endless. There are countless little study rooms and lab benches and kitchenettes built at oblique angles. I stumbled into a library, one lonely plant bed, and a meditation room. Just when I thought I was alone, I ran into a tired grad student struggling against a printer. Almost all the doors have a scanner on them, and I swiped at each, hoping more easter eggs await. This strategy did not get me very far. When the mystery was unresolved, I told myself there’s probably nothing there anyway. Most parts feel barely used, a new-car smell still faint on the paint. It feels like a too-large apartment. 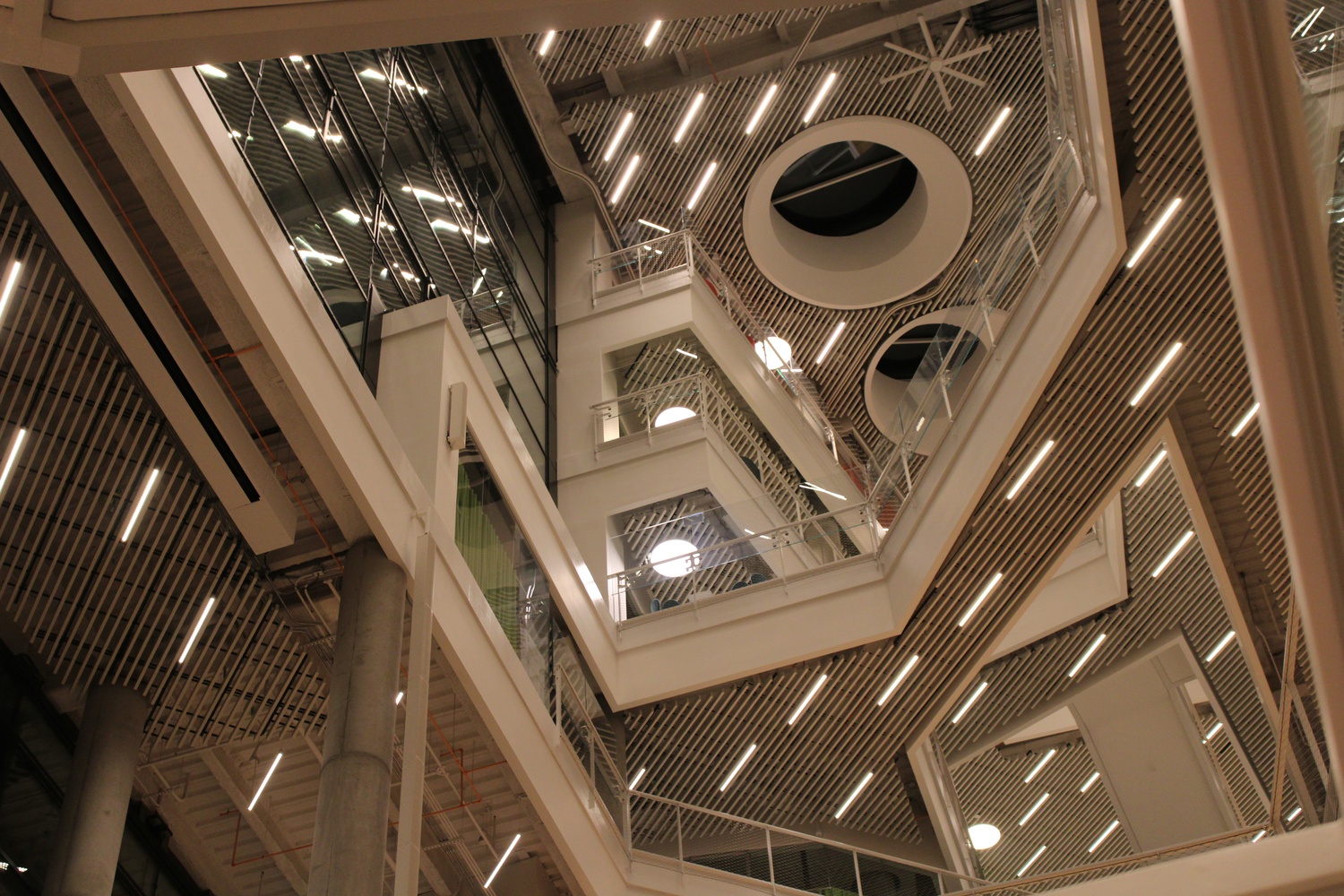 In a few years’ time, perhaps the SEC will become the dynamic space it hopes to be. All the features beckon us to come and stay, work, 3D-print something useless, soak in the sun through the windows, exercise and shower, warm up a frozen meal, and wake up to a BoardPlus breakfast. It’s not quite settled yet. At dusk, when I headed back on the bike, there were no rats scampering until I got to the Square. No one was there to leave crumbs out for them.

Luckily, time is one thing that the SEC has plenty of. Certified for its sustainability by the International Living Future Institute and the U.S. Green Building Council, the building is also armed to stand the test of climate change, with special systems to manage stormwater and mitigate power outages. A pamphlet online advertises that it could outlast a 100-year-long rainstorm. I won’t be returning to the SEC for any more school-night shenanigans — but if the skies ever open up to a biblical storm, you’ll know where to find me.