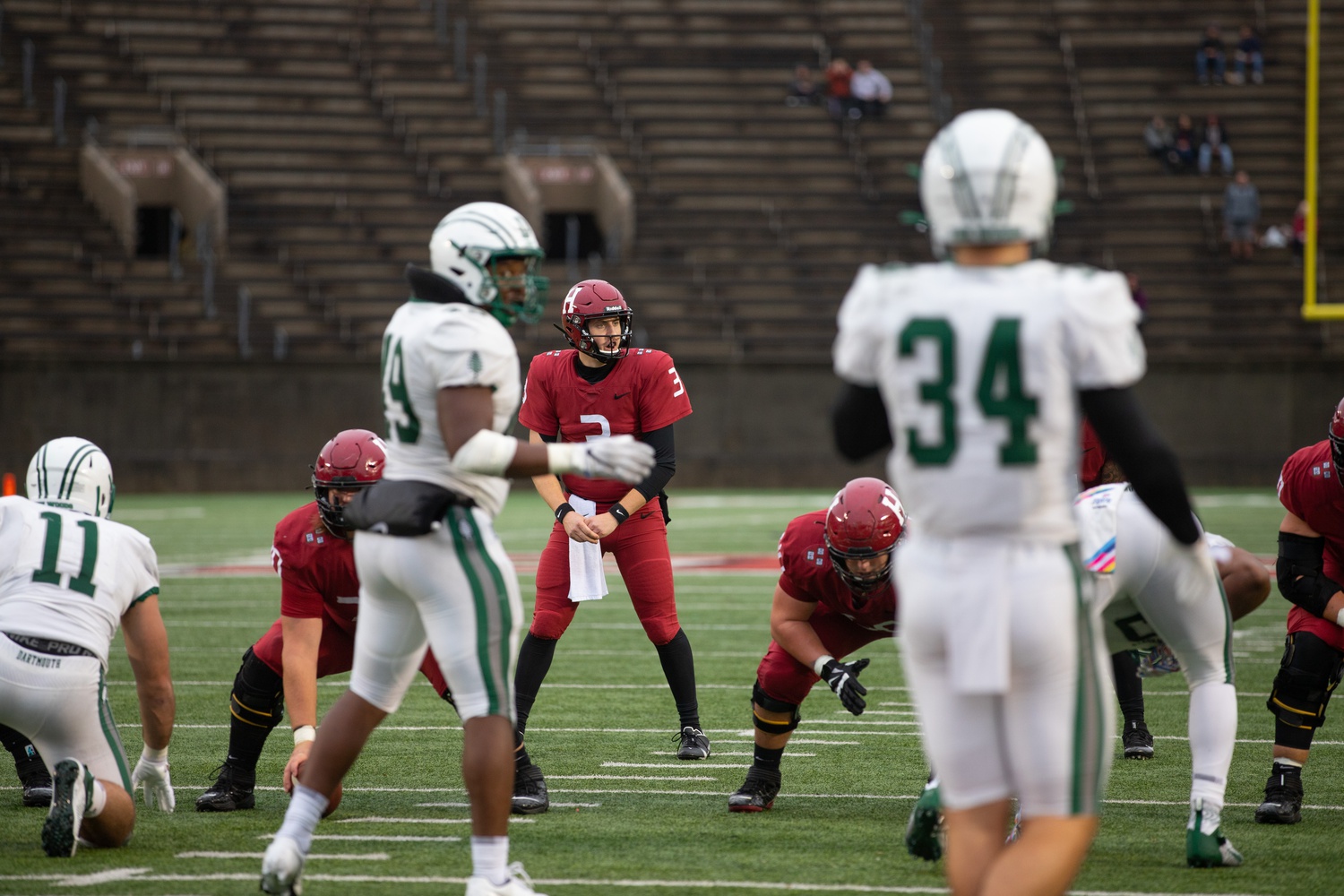 Senior quarterback Luke Emge awaits the snap in a 20-17 loss to Dartmouth on Oct. 30, 2021. On Saturday, Emge got his revenge, completing 11 of his 17 passes for 195 yards in a 28-13 victory over the Big Green. By Angela Dela Cruz
By Griffin Wong, Crimson Staff Writer

After last week’s 37-10 loss to Princeton dropped Harvard (5-2, 3-1) into third in the Ivy League standings, the Crimson needed a win to keep its hopes for an Ivy League championship alive. Harvard likely has to win each of its last four games in order to have a real chance at claiming the conference title, and the Tigers must lose once. During Saturday’s 28-13 victory over Dartmouth (2-5, 1-3), the Crimson offense was rarely pretty, but it scrapped its way to a needed win. It helped Harvard gain a spot in the Ivy League standings, as previously undefeated Penn shockingly fell to Brown, 34-31, in Providence, R.I. The Crimson now stands in second, as Princeton continued its hot play by blowing out Cornell at home, 35-9.

“We battled,” head coach Tim Murphy said. “It was an old-fashioned type game, obviously, in the best possible context.”

Senior quarterback Charlie Dean, who had started each of the first six games of the season, was unable to play due to minor injuries that he suffered last Friday, so Murphy turned instead to senior quarterback Luke Emge. Emge is best known in Harvard lore for taking over the offense after Dean’s season-ending injury at Princeton in 2021 and leading the Crimson to a 3-0 record in his starts, including a remarkable late-game comeback to secure a memorable 34-31 victory at Yale. Emge picked up right where he left off; after developing impressive chemistry with senior wide receiver Kym Wimberly late last season, his connection with his star was evident early on. The Slidell, La. native hauled in two passes for 56 yards on the second drive of the game, including a 34-yard touchdown where he had at least three yards of separation from the nearest Big Green defender. Wimberly’s first-half exploits accounted for more than a third of Emge’s passing yards throughout the game, as the Lancaster, Pa. native completed 11 of his 17 passes for 195 yards, one touchdown, and one interception.

After running into the second-best rushing defense in the Football Championship Series (FCS) last weekend in the loss to Princeton, senior running back Aidan Borguet faced a much friendlier opponent on Saturday in Dartmouth, which had allowed an average of 166 yards per game on the ground to opposing offenses entering the contest. After he was held out of the end zone for the first time this season against the Tigers, Harvard’s star player rebounded on Saturday. Emge handed the ball off to Borguet 26 times, and the running back made the Big Green pay, slashing his way through its secondary for 179 yards and two scores. 136 of those yards came in the second half, as the Crimson, clinging to a one-point halftime lead, turned to the run game, outscoring Dartmouth, 14-0, in the final two frames. On Oct. 20, the Franklinville, N.J. native was added to the watch list for StatsPerform’s Walter Payton Award, awarded annually to the top offensive player in collegiate football, and he undoubtedly strengthened his case on Saturday.

The Big Green, fresh off a 27-24 victory over Columbia the week prior, posed a strong challenge to Harvard in the first half. Dartmouth head coach Buddy Teevens – a childhood friend of Murphy – operates an unorthodox offense, alternating two quarterbacks in a platoon. In last season’s 20-17 victory at Harvard Stadium, Teevens ran this system to perfection, as the combination of Derek Kyler and Nick Howard flummoxed the Crimson defense. Despite Kyler, a Second Team All-Ivy player in 2021, graduating, the veteran head coach opted to maintain his strategy this year, with Dylan Cadwallader replacing Kyler as the primary passing quarterback. 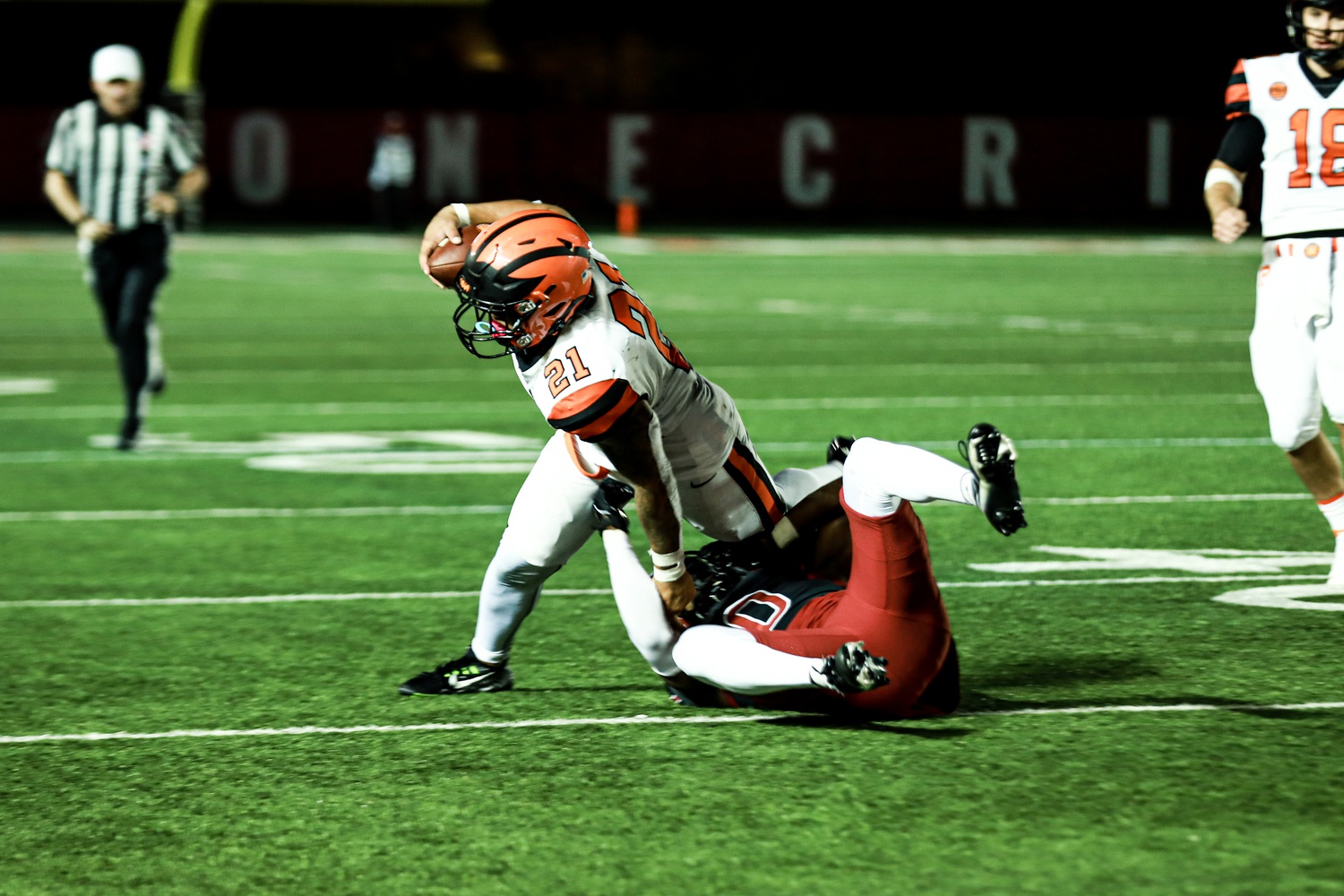 Senior defensive back Alex Washington attempts to bring down Princeton running back Ryan Butler during a 37-10 loss to the Tigers on Oct. 21. This Saturday, Washington and the defense were critical in securing a 28-13 victory over Dartmouth. By Josie W. Chen

His preferred style appeared to be successful in the first half on Saturday, as though Howard – who received all the snaps behind center on the Big Green’s first two drives – completed just one of his six passes for two yards throughout the game, Dartmouth embarked on two consecutive touchdown drives in the second quarter to cut the deficit to one point. Cadwallader was strong throughout the first half, completing seven of his 11 passes for 113 yards and finding wide receiver Jamal Cooney for a beautiful, arcing deep ball that the senior brought in on a dive for a 44-yard gain. Cooney’s reception brought the Big Green inside the 30-yard line and set up a one-yard scoring plunge by Howard. Then, after Wimberly’s nine-yard touchdown run on an end-around, Cadwallader and Howard led their offense down the field again. On the 13-play, 75-yard drive, four Cadwallader completions and two Howard scrambles resulted in a four-yard rushing touchdown by running back Zack Bair.

“It’s always a challenge because their running guy can throw and their throwing guy can run,” Murphy said. “They’re so sound. The two quarterbacks makes it harder, not easier.”

In fact, Harvard only had a halftime advantage on the strength of its special teams, as senior defensive lineman and team captain Truman Jones got a hand on Dartmouth kicker Ryan Bloch’s extra point attempt. It was the Crimson’s seventh blocked kick this season, a category in which it ranks second in the FCS, behind only Morehead State.

“After the first extra point, I was able to just get a feel for the offensive line and how they were blocking,” Jones explained. “I was able to get in there and use my height to get my hand up, and just grateful that the play opened up and I was in that position.”

After halftime, Harvard’s strong rushing offense took over, as 30 of the Crimson’s 49 rushing attempts came in the final 30 minutes of play. As a result, it was also able to control the clock, possessing the ball for more than 19 minutes across the two quarters and holding the Big Green to just three minutes, 15 seconds of possession time in the third quarter. The key drive in the third period was a nine-play, 76-yarder that took four minutes, 11 seconds off the clock and resulted in a 12-yard rushing touchdown by Borguet, who took a handoff and waltzed in completely untouched by the left pylon.

“All the credit goes to our coaching staff and our offensive line,” Borguet said. “They make our job as running backs – and my job – a lot easier.”

Harvard’s methodical offense did wonders for the other side of the ball, as defensive coordinator Scott Larkee ’99’s unit put together its most complete half of football all season. The Big Green amassed just 10 yards of total offense in the third quarter, picking up one first down, and rushed for only six yards in the entire second half. Although Dartmouth was able to throw for 95 yards in the fourth quarter, 84 of them came during the final two possessions, with the Crimson holding a two-touchdown lead and playing “prevent defense”: a strategy typically employed by a team willing to give up small chunks of yardage in order to prevent an explosive play. Harvard even ended the game with a flourish, as Cadwallader’s Hail Mary attempt with eight seconds remaining fell into the waiting arms of junior safety Victor Tademy at the goal line, which was just the Crimson’s fourth interception of the season. 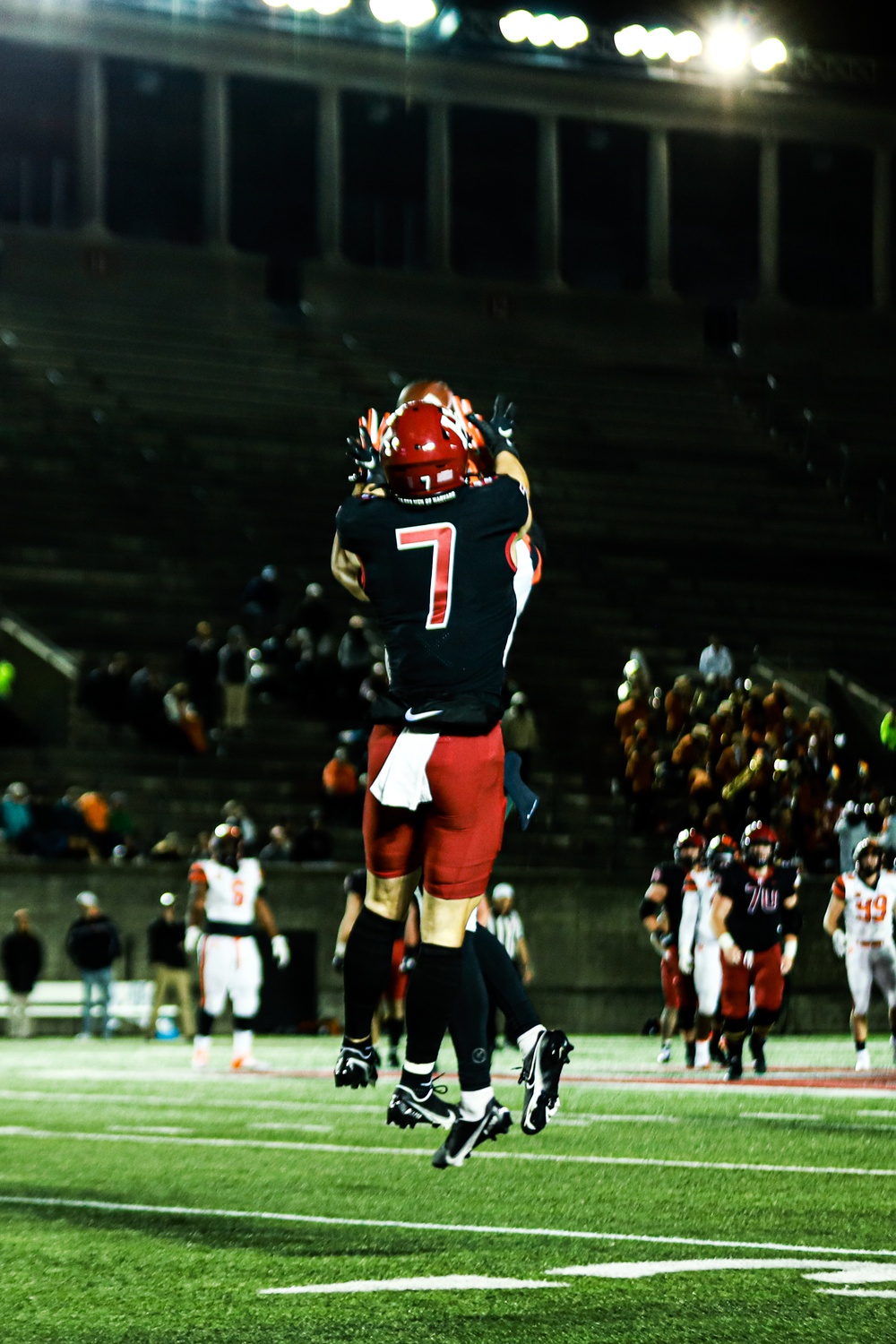 Junior wide receiver Kaedyn Odermann battles for a jump-ball against a Princeton defender, a play that would result in an interception. On Friday, Odermann stepped up in the second-half injury absence of Kym Wimberly, hauling in two catches for 15 yards and helping Harvard to a 28-13 win over Dartmouth. By Josie W. Chen

Despite the victory, there were a few areas of concern for Harvard. After being among the best third-down defenses in college football last season, the Crimson has slipped to 84th this year, allowing opposing offenses to earn a fresh set of downs on 43.8 percent of opportunities. Last Friday, the Tigers successfully moved the chains on nine of 16 occasions, and Harvard was not much better on Saturday, as the Big Green managed to convert six of its 14 chances. Additionally, the Crimson was undisciplined at times on Saturday. After being one of the most-penalized teams in college football in the first few games of the season, it played much cleaner against Howard and Princeton, but was flagged 10 times for 70 yards against Dartmouth. Two of the penalties came on a late-game punt with the victory secure, but more disciplined play will likely be a focus for Harvard moving forward.

The offense may have also lost arguably its second most-valuable player. On a trick play late in the second quarter, Wimberly went down awkwardly on a six-yard loss. After a few minutes on the turf, he was helped to the sideline by two members of the Crimson training staff, not putting any weight on his left leg. He did not return to the field, and Murphy did not provide a diagnosis after the game. If he misses any time, it would be a huge blow for Harvard, as the senior has made tremendous strides as a receiver this year, hauling in an Ivy League-leading 50 passes for 598 yards and four touchdowns.

After its convincing victory on Saturday, the Crimson will hope to continue its momentum when it welcomes Columbia to Harvard Stadium on Nov. 5. The last time it faced the Lions, it raced out to a 42-0 lead in New York City last Nov. 6 in the first of a season-ending, three-game win streak. If Harvard can repeat the feat against Columbia, which has yet to win an in-conference matchup, it should keep itself in the thick of the Ivy League mix. And no matter who starts at quarterback next weekend, Murphy was confident that his team would step up.

“Whichever guy’s at the helm,” he said, “we’re going to be okay.”
–Staff writer Griffin Wong can be reached at griffin.wong@thecrimson.com. Follow him on Twitter @Wong_THC.