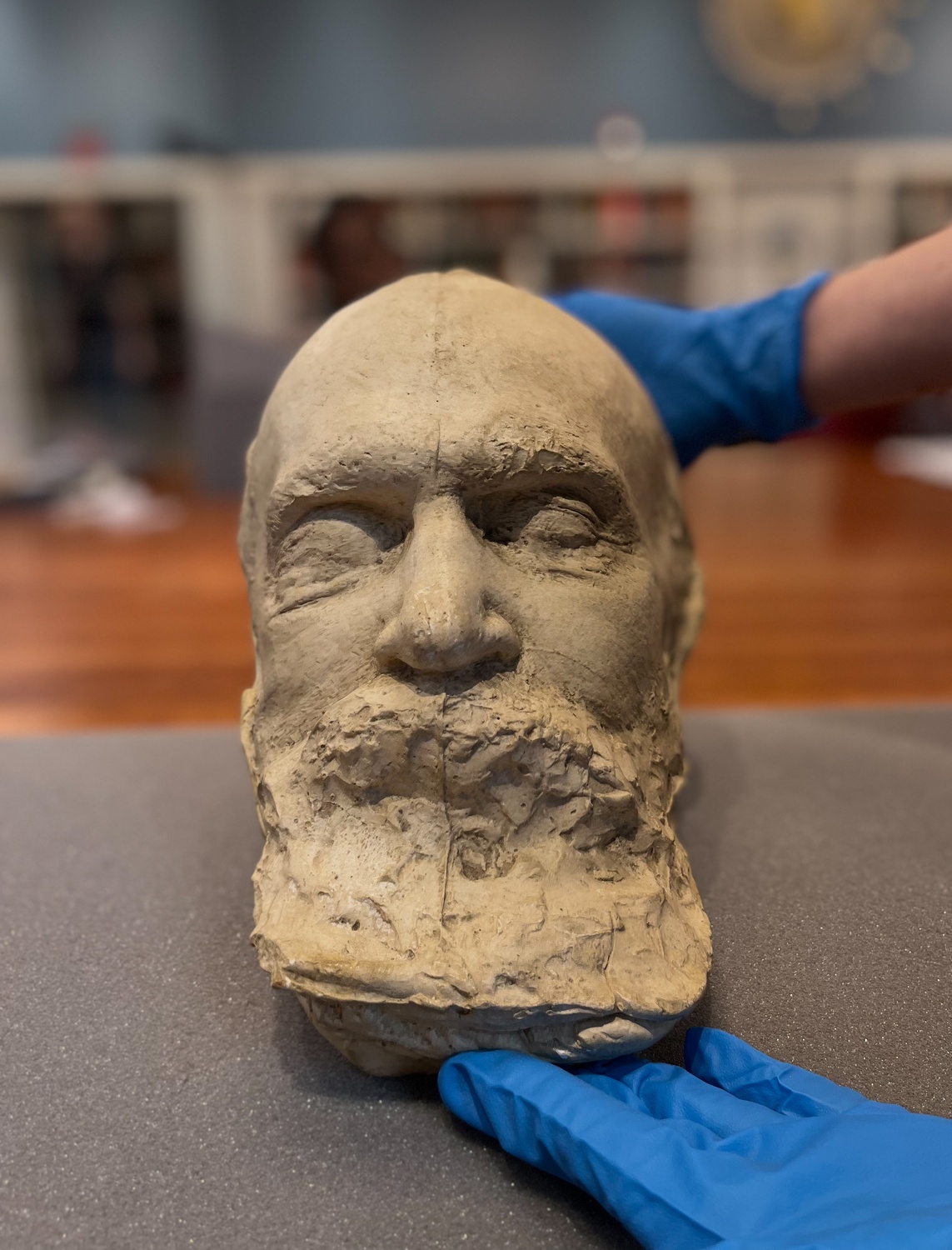 In a box lined with crinkled tissue paper lies renowned Harvard philosopher and psychologist William James. Yellowing plaster one centimeter thick preserves his receding hairline and strong brow and makes permanent the wrinkles under his shut eyes. His beard, bushy and full in life, is now a lump obscuring his mouth, rendering him doubly silent.

James’s face is just one of the so-called death masks kept in the special reserves collection of Houghton Library, three levels below the main floor. Before entering the collection himself, James had gifted Harvard a death mask of 17th century French mathematician, Blaise Pascal. His family turned the gifter into the gifted when they donated James’s death mask to Harvard, after years of using it to cast duplicates, like shadows of a shadow.

The practice of preserving likenesses of the deceased dates back to ancient Egypt, when sculpted masks were created during funeral ceremonies. Creating death masks using cast plaster molds first started in the Middle Ages and continued well into the 20th century. The idea was to create as accurate a likeness as possible to immortalize celebrated figures, usually men.

The heads, of which there are over a dozen, were almost all given as gifts to Harvard.. Housed across the Houghton, Schlesinger, and Widener libraries, the Harvard Art Museums, and the Harvard Law School, the death masks aren’t a unified collection. Instead, the ghostly impressions are kept wherever their owner’s papers or books are housed, adding something tactile to two-dimensional sources.

Leslie A. Morris, Gore Vidal Curator of Modern Books and Manuscripts, describes the death masks as “rather ghostly.” “They can seem to float in a way,” she says. “It’s just a disembodied head.”

After his death, James was both cast and photographed by his son of the same name, the painter and photographer William “Billy” James. “There was a real sense of family there,” Morris says.

But it was the death of James’s other son, Herman, who spurred James’s study of the supernatural. After Herman died as an infant in 1885, the same year James became a full professor at Harvard, he and his wife visited a Boston medium to try and connect with Herman’s spirit. The same year, James founded the American Society for Psychical Research, a spiritualist research institute.

Spiritualism is the belief that the dead can communicate with the living through the use of a medium. One of ASPR’s main functions was to audit those mediums, trying to determine who could truly pierce beyond the veil.

Though the scientific community today thinks of spiritualism as pseudoscience, in the 19th century, it was considered a legitimate scientific pursuit.

According to Deborah Blum, a Pulitzer-prize winning journalist and author of “Ghost Hunters: William James and the Scientific Proof of Life After Death,” the leading figures of spiritualism in the 19th century were “hardcore, very respected scientists.” Blum lists Nobel Prize winners Charles Richet, Lord Rayleigh, and Marie Curie as being among those with research interests in the supernatural.

In the 19th century, the scientific community’s interest in spiritualism stemmed from a crisis of belief, according to Blum. The advents of geology and evolutionary theory started “revealing these layers of the Earth’s history that are very challenging to the Biblical explanation of creation,” she says.

“There’s this sort of cultural angst,” Blum says. “What’s real? What’s not real? Who explains the world? Who doesn’t?”

Loss of faith in the Church led some to turn to alternate systems of belief — including spiritualism.

However, as more scientists dove into spiritualism, they found that the field was not “nearly as trustworthy as they thought,” as Blum puts it. Gradually, scientists began “backing away.”

Despite the waning popularity of the field, William James continued his research. “It’s really interesting when you get into his later thoughts on the subject,” Blum notes, “because he’ll talk about why he doesn’t give up on the issue.”

“Let’s just say there’s a door to unlimited possibilities in the universe,” says Blum, paraphrasing James’s reasoning. “You slam it shut, because science has persuaded you that everything is tangible and fungible and concrete.”

“Well, his argument at the end was: that’s a mistake. Because that’s hubris. We don’t know everything.”

Although spiritualism never again reached the level of legitimacy it had in the 19th century, interests in the field have spiked at different points throughout history.

For example, interest in spiritualism rose after the American Civil War, as families of the deceased grappled with loss, says Blum. “Their families desperately wished for some way to communicate with them,” she says. “The Ouija board was invented in that time period.”

Blum describes similar spikes in interest after World War I and during the more recent wars in Iraq and Afghanistan. She says that all three instances are times when “everything feels uncertain.”

“These periods of anxiety, when the explanations we have don’t seem enough, tend to drive an interest in spiritualism.”

That interest in spiritualism persists even today. After all, James’s ASPR still exists in New York. “This is as uncertain a time as any,” Blum says.

We can try to combat that uncertainty by ways of mediums or molds to find understanding of both the world around us and the world beyond us. While James’s corpse is still six feet under, at a simple Hollis special request his likeness can rise from below and up three floors to the Houghton reading room. In visiting the archives, we can access James’s legacy not only through his texts, but by looking him right in the eyes.