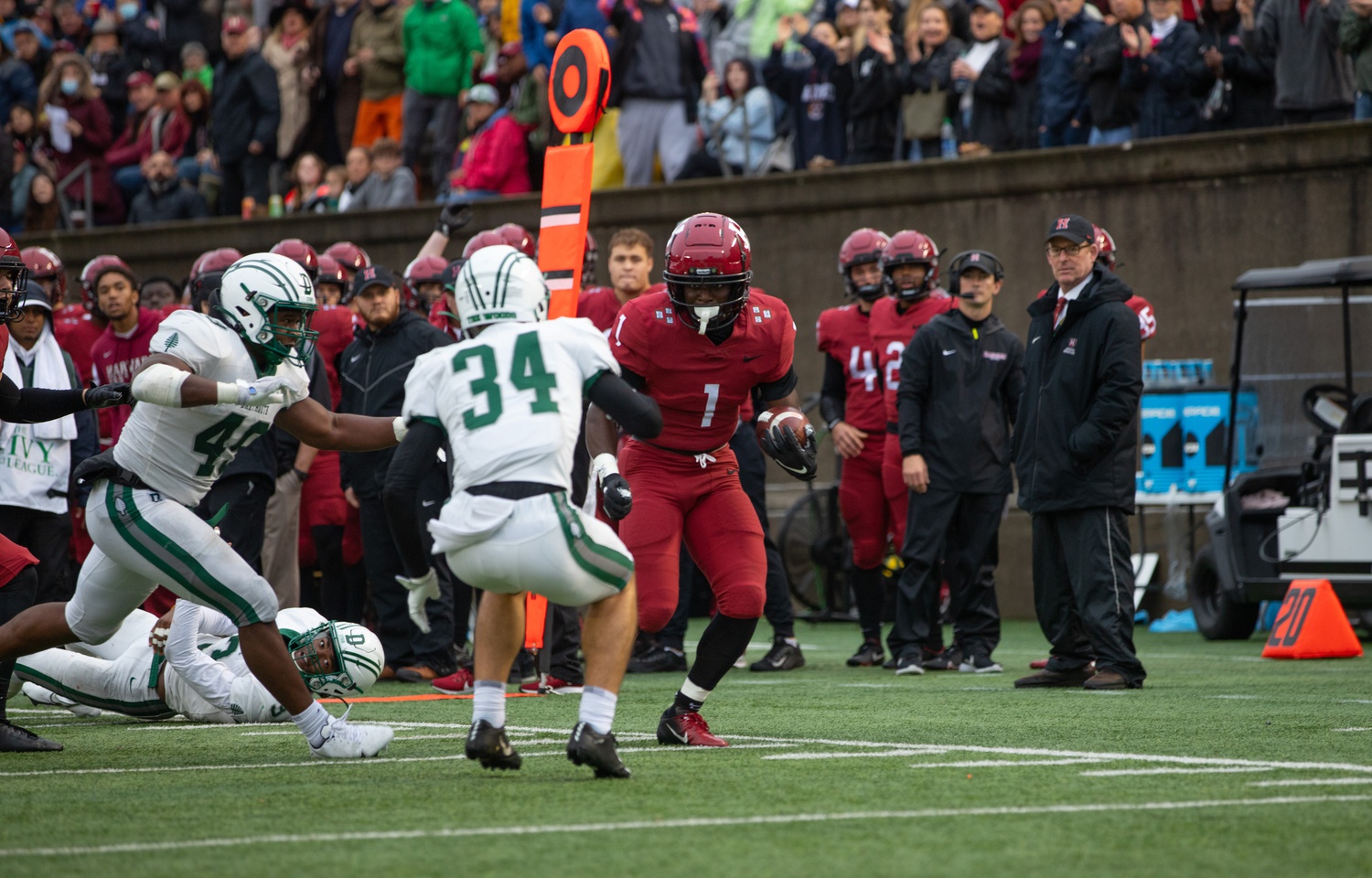 Senior wide receiver Kym Wimberly looks to make a move against a Dartmouth defensive back in a 20-17 loss to the Big Green on Oct. 30, 2021. This season, Wimberly has hauled in 45 passes for 528 yards and three scores. By Angela Dela Cruz
By Jack Silvers and Griffin Wong, Crimson Staff Writers

Coming off its most lopsided defeat in more than five years, it is crunch time for Harvard football (4-2, 2-1). Sitting in third alongside Yale in the Ivy League standings, the Crimson likely must win each of its last four games to have a chance to win its ninth conference title this century. Harvard’s gauntlet starts this Saturday, when it will travel to Hanover, N.H., for a 1:30 p.m. clash against Dartmouth (2-4, 1-2). It will be another opportunity to avenge a defeat, as the Big Green won last year in Harvard Stadium, 20-17. Dartmouth and Princeton, with dual records of 9-1 (6-1), shared the 2021 conference crown. Senior defensive lineman and captain Truman Jones expressed confidence in his team’s chances on Saturday.

“We definitely know the football that we’re capable of playing,” he said. “We’ve been on an upward trajectory and feel like it just all hasn’t come together yet. … We’re still hoping to maintain that upward trajectory, make more plays, [and] play with better fundamentals.”

The Crimson never got its offense off the ground in the 37-10 loss to the Tigers last Saturday, as senior quarterback Charlie Dean tossed for just 186 yards, senior running back Aidan Borguet failed to find the end zone for the first time this year, and Harvard was held off the board after junior tight end Tyler Neville’s touchdown with one minute, 24 seconds remaining in the first half. Meanwhile, its defense could not keep Princeton off the field, as wide receiver Andrei Iosivas hauled in nine passes for 176 yards and a touchdown and the Tigers earned 469 total yards.

On Saturday, the Crimson will be facing a team that has momentum on its side. Despite getting off to a slow start this season, the Big Green found some success in its last game, a 27-24 victory over Columbia in New York City. Dartmouth utilized a quarterback-by-committee approach in its win, just as it did last year, when Nick Howard and Derek Kyler split reps under center. Howard completed five of his eight passes for 77 yards, while counterpart Dylan Cadwallader went eight for 15 for 116 yards and a touchdown. It was Howard who led the offense during the final five-play, 65-yard drive that led to Ryan Bloch’s game-winning 32-yard field goal.

Howard has built on his All-Ivy League First Team campaign in 2021 with a strong 2022 season, taking on a bigger role in the passing game. After throwing for just 126 yards last season, Howard has amassed 414 in the first six games of the season. But just like last year, when he turned his 125 carries into 787 yards and 15 touchdowns, Howard figures to be more of a threat in the Big Green’s rushing attack. So far this season, he has been stellar on the ground, with 383 yards and six touchdowns in 76 carries. His 383 yards rank fourth in the Ivy League, behind only Borguet and the Yale duo of running back Tre Peterson and quarterback Nolan Grooms. His efforts on the ground will be supplemented by the running back duo of Q Jones, who has rushed for 335 yards in his sophomore campaign, and senior Zack Bair, who has added 321. 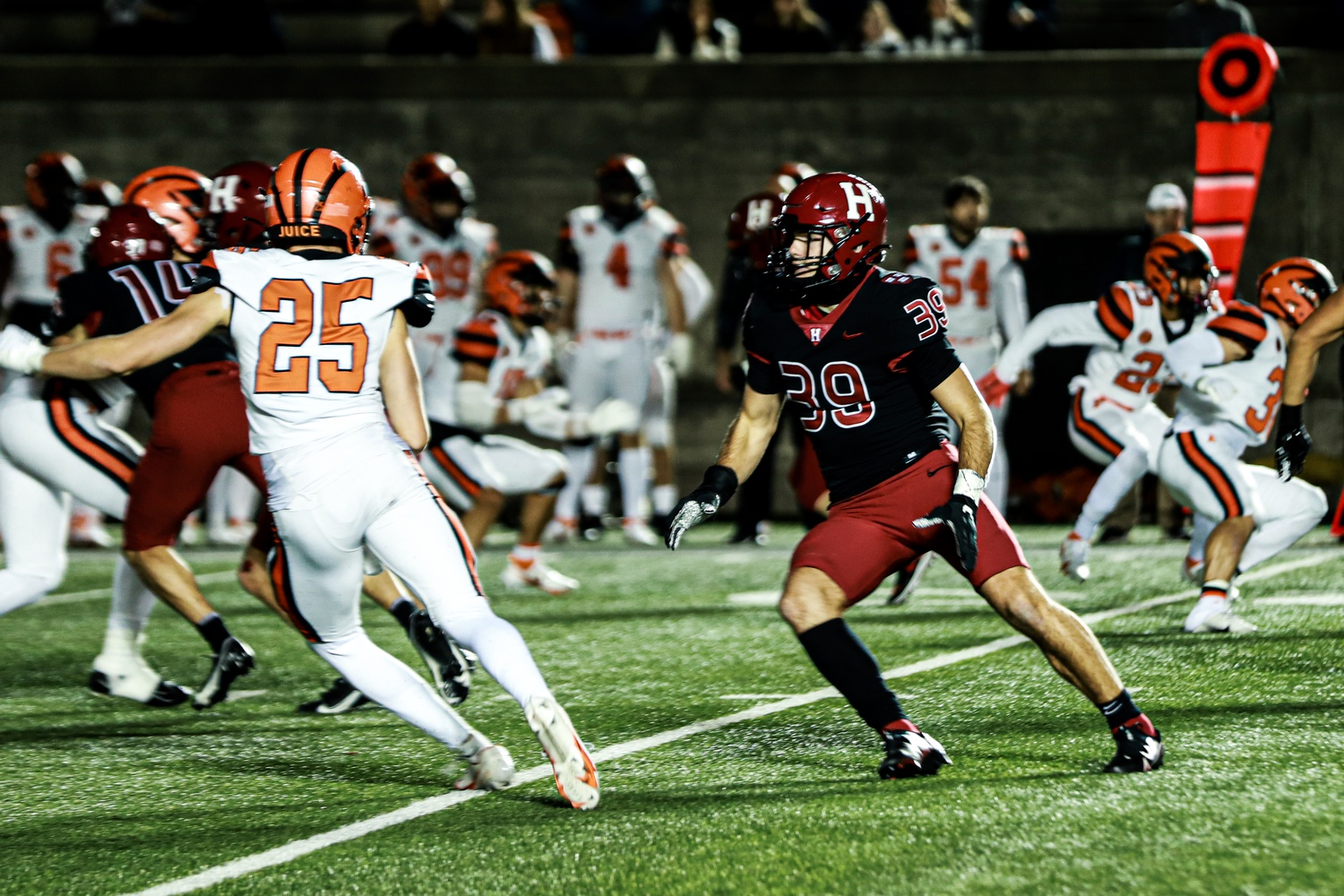 Sophomore linebacker Mitchell Gonser lines up a tackle attempt in the Crimson's 37-10 loss to Princeton last Friday. After its worst defensive performance of the season, Gonser's unit will hope for better results on Saturday. By Josie W. Chen

Dartmouth’s aerial attack will be led by Cadwallader, who took over as the top passing option after the Sept. 30 loss to Penn. In his first season of consistent action, the junior has been solid, completing 54.3 percent of his passes for 450 yards, three touchdowns, and two interceptions. His top target on Saturday will likely be Paxton Scott, who had his strongest game of the 2022 campaign in the win over Columbia, as he hauled in six passes for 104 yards. In last year’s win over the Crimson, he caught six passes for 60 yards, which was enough to make him the team’s second-leading receiver. There has been a lot of turnover in head coach Buddy Teevens’ receiving corps, however; tight end Robbie Mangas, who scored a touchdown last year in Cambridge, graduated, and that game’s leading target, wide receiver Dale Chesson, has not played since the Sept. 24 loss at Sacred Heart.

The fact that Dartmouth has the 11th worst passing offense in the Football Championship Subdivision (FCS) bodes well for Harvard, which has struggled mightily to control opposing teams’ quarterbacks in 2022. In fact, the Crimson, which allows 272.2 yards per contest through the air, has the worst passing defense in the Ivy League. Senior defensive backs Alex Washington and Khalil Dawsey will hope to rebound from a shaky performance in last Friday’s loss to Princeton, while junior safety Victor Tademy and senior defensive back James Herring will join them in the secondary. Among Harvard’s starters, only Washington has recorded an interception, as the Crimson is tied with Yale for the country’s ninth-worst turnover margin.

Instead, defensive coordinator Scott Larkee ’99 will rely on his front seven to slow down Dartmouth’s rush-centered offense. Despite allowing Princeton to rush for 191 yards last week, Harvard still holds the eleventh-best rushing defense in the FCS, allowing a paltry 95.7 yards per game. The run-stopping unit is led by junior defensive tackle Thor Griffith, who ranks second on the team in tackles with 31 despite not recording one in the 41-25 win over Howard on Oct. 15. Joining Griffith on the defensive line are seniors Nate Leskovec, whose 4.5 sacks this season all came in the 28-21, season-opening win over Merrimack, and Truman Jones, who has recorded at least half a sack in each of the past four games. Behind them, junior linebacker Matt Hudson had a career-best game last weekend, adding ten tackles to pace the team, and senior linebacker Jack McGowan has 30 tackles and three pass deflections.

“As a [defensive] line, just focusing on our techniques and really patch those moves, playing with better hands, as well as getting a read on what the guy across from us is doing, so we can anticipate and get a better jump on the ball,” said Jones of his team’s keys to success this weekend.

For the Crimson to win on Saturday, though, it will need more variety out of its offense. After spreading around the ball and getting his primary deep threat, sophomore wide receiver Ledger Hatch, involved in the early part of the season, Dean relied primarily on senior wide receiver Kym Wimberly and junior tight end Tyler Neville in the loss to Princeton. Dean has done a tremendous job protecting the ball this season, throwing just two interceptions, both of which came in the season opener. He has been aided all year by the sure-handed Wimberly, who leads the Ivy League in catches with 45 and his 528 receiving yards ranks third in the conference, behind the Tigers’ Iosivas and Dylan Classi. But for Harvard to succeed against the Big Green defense, the passing game will have to be more varied, as head coach Tim Murphy alluded to after the defeat.

“We need to distribute the ball for a lot of reasons,” he said. “One is just to make yourself as unpredictable as you possibly can, and also don’t allow them to double-cover our best guys.” 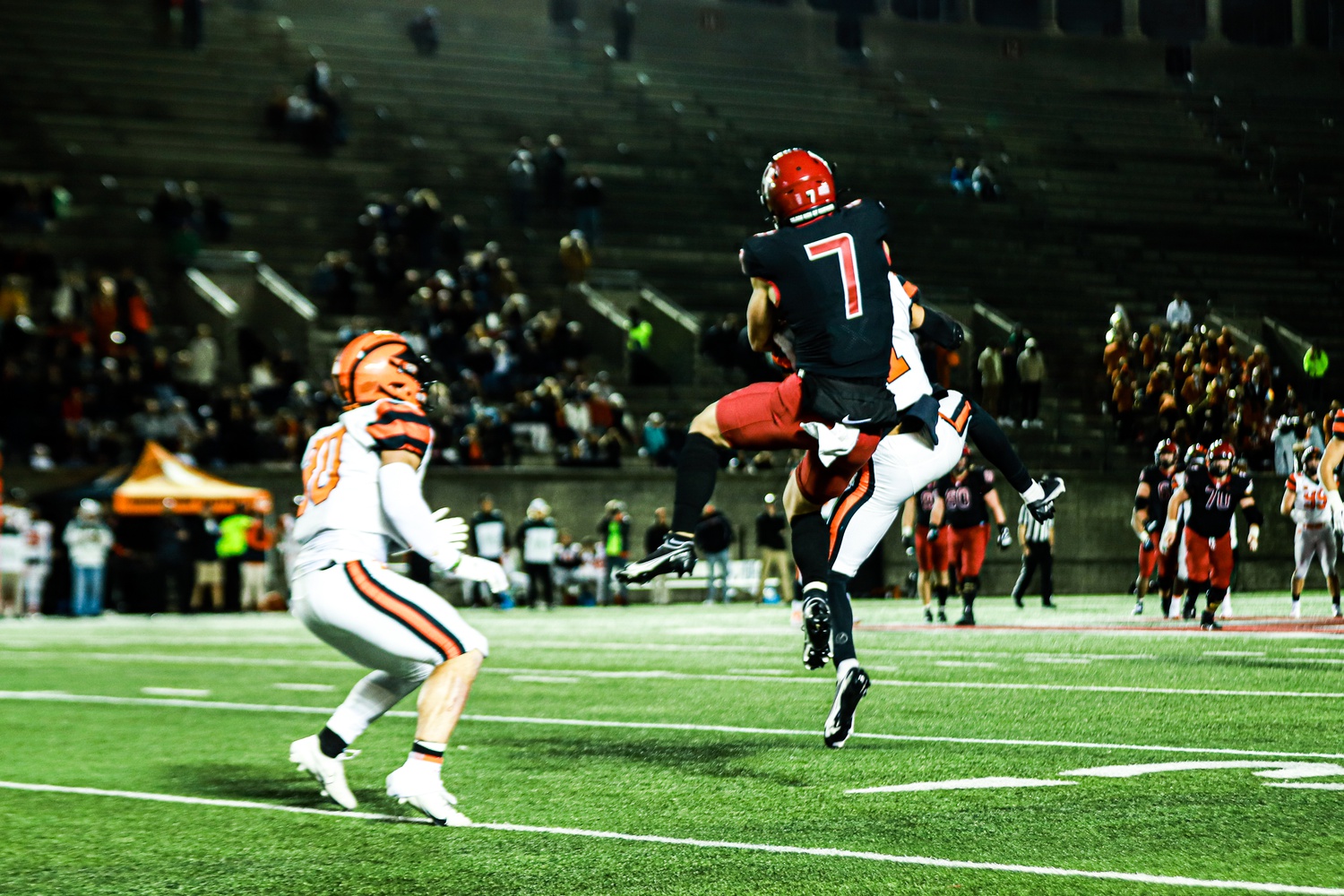 Junior wide receiver Kaedyn Odermann attempts to high-point a ball in the 37-10 loss to Princeton last Friday. Unfortunately for the Crimson, the play resulted in an interception. By Josie W. Chen

Borguet will also hope to bounce back after a relatively shaky game against Princeton – by his lofty standards. After taking 104 carries for 620 yards and seven touchdowns in the first five games of the season, he was kept out of the end zone on his 15 carries, totaling 96 yards. An Oct. 20 addition to the watchlist for the Walter Payton Award, which honors collegiate football’s top offensive player, the senior has been the focal point of the Harvard offense all season, accounting for 31.2 percent of the Crimson’s plays through the first six games.

Borguet can expect to put up a stronger performance against a Dartmouth defensive front that ranks as the second-worst rushing defense in the Ivy League. In a conference where coaches typically prioritize stopping the run, opposing backs have gouged the Big Green for 166 yards per game on the ground. Dartmouth’s defense features breakout linebacker Macklin Ayers, who saw play time sparingly as a sophomore in 2021 before ranking second in the FCS with 60 tackles in just five games. He put up a monster 16-tackle performance at Yale before missing the Columbia contest. Additionally, Harvard will have to contend with a familiar foe in safety Quinten Arello, who recorded an interception in last year’s victory and ranks third on the team with 41 tackles. Like the Crimson, though, the Big Green has struggled with takeaways this season, nabbing just three picks in 2022 so far.

All time, Harvard has a dominant record against Dartmouth, winning 71 out of the previous 124 contests. However, the teams have been more evenly matched in recent years, as the Big Green has claimed each of the last three games against the Crimson, including a last-minute victory on a Hail Mary pass in 2019, which portended Harvard’s five-game losing streak to end that season.

The Crimson will have a lot riding on the line on Saturday – redemption for narrow losses in each of the past three games between the teams and a chance to get back into the conference title chase. Harvard fans can catch the game on ESPN+ or NESN+ or hear it over the radio on WRCA at 1330 AM, 105.1 FM, or 92.9 FM-HD2.