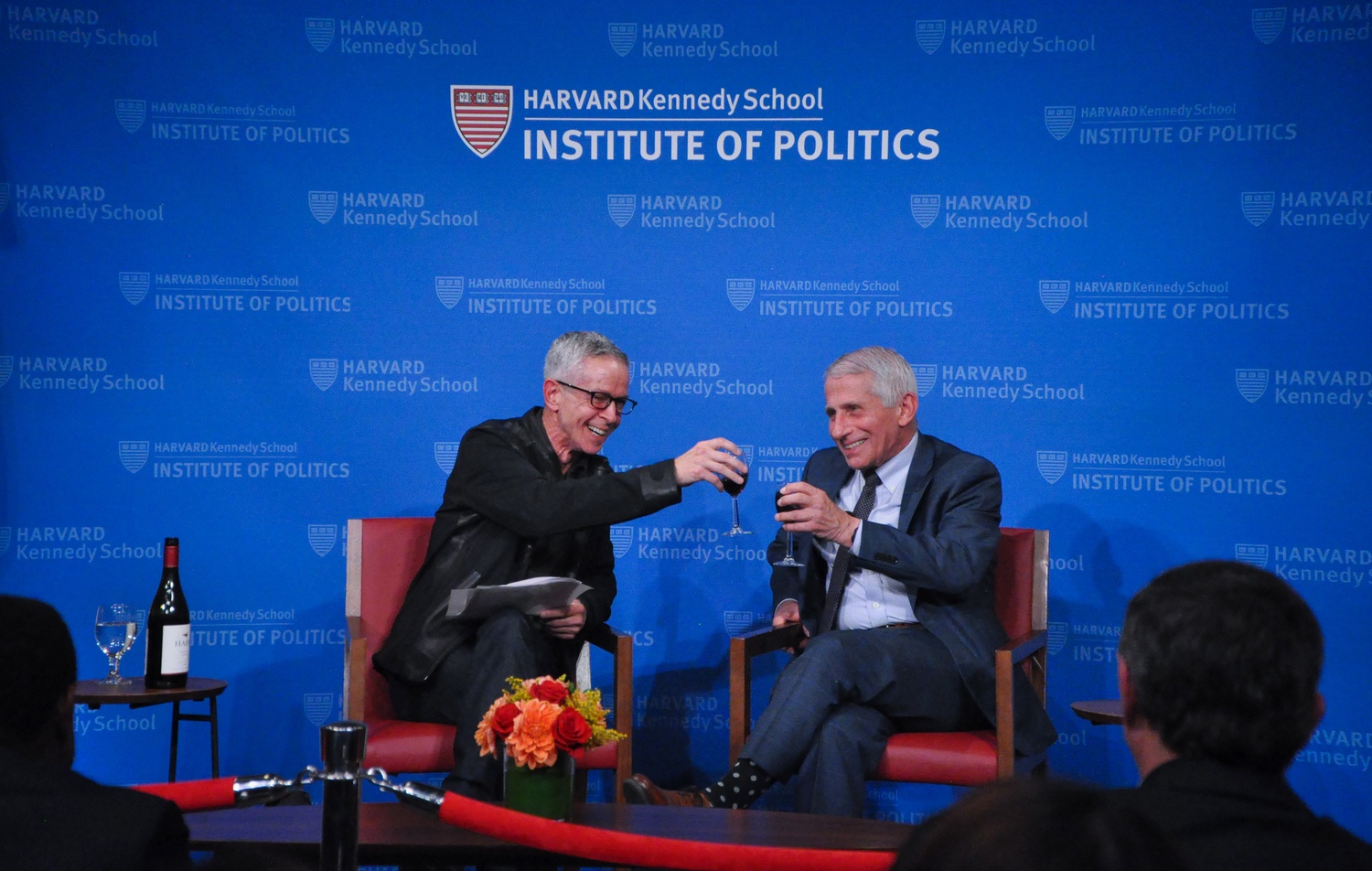 Anthony S. Fauci, who has led the United States government’s response to Covid-19, reflected on his five-decade career in public service during a Harvard Institute of Politics forum on Wednesday.

Fauci, who serves as President Joe Biden’s chief medical advisor and the director of the National Institute of Allergy and Infectious Diseases, is set to step down from his current roles in December. But he said in an interview with The Crimson prior to the event that he plans to stay active even after his departure.

“What I have to offer is experience and judgment, and that’s what I'd like to do — is to inspire young people,” Fauci said. “I am not retiring in the sense of playing golf or something.”

The event was moderated by AIDS and LGBTQ+ rights activist Peter Staley.

Fauci discussed the government’s response to Covid-19 at the start of the pandemic in January 2020, including his statements about masking. Fauci said he initially advised against wearing a mask, but changed his messaging after new data indicated it could prevent the spread of the disease.

“In science, which I'm sure most people in this audience know — it's a self-correcting process,” Fauci said during the event. “You have an obligation as a scientist to change what you're saying about something based on the data. And that’s what we did.”

“When you politicize something, almost by definition, you have ideological differences,” he said. “That was, I believe, really one of the reasons why we had a less-than-optimal public health response to Covid.”

Regarding U.S. Senator Rand Paul (R-Ky.), whom Fauci publicly clashed with during several Capitol Hill hearings, Fauci said Paul and others were politicizing the pandemic, which he deemed unacceptable.

“I think the thing that's important is that what he and others are doing is politicizing a very serious situation that the American public is facing,” he said “It’s the historic pandemic, the likes of which we haven't seen in 100 years. And to politicize it is really unacceptable.”

Fauci discussed his experience working with policymakers throughout his career.

“One of the things that I had to do from the very beginning was make up my mind that as a physician and a scientist, the thing that matters is truth and reality,” he said. “If you’re going to deal, on a public policy level, with people like elected officials — presidents and the senior staff around them — you’ve got to make up your mind that you will always tell the truth, even if the truth is inconvenient.”

In the interview prior to the event, Fauci also discussed the impact misinformation has on public health.

“The striking thing that we're dealing with now is what I call the normalization of untruth, which means there is so much misinformation and deliberate lying going on that it is now accepted as normal,” he said.

As for the possibility of a future pandemic, Fauci said in the event that he remains uncertain of the country’s preparedness to handle one.

“How do we get the general public to be committed to the long-term investment in preparation for something that hasn't happened yet?” he asked. “I think that's really a tough one. I hope we can deal with it, but I'm not sure we can.”