In Most Lopsided Loss in Five Years, Harvard Football Gets Trounced by Princeton, 37-10 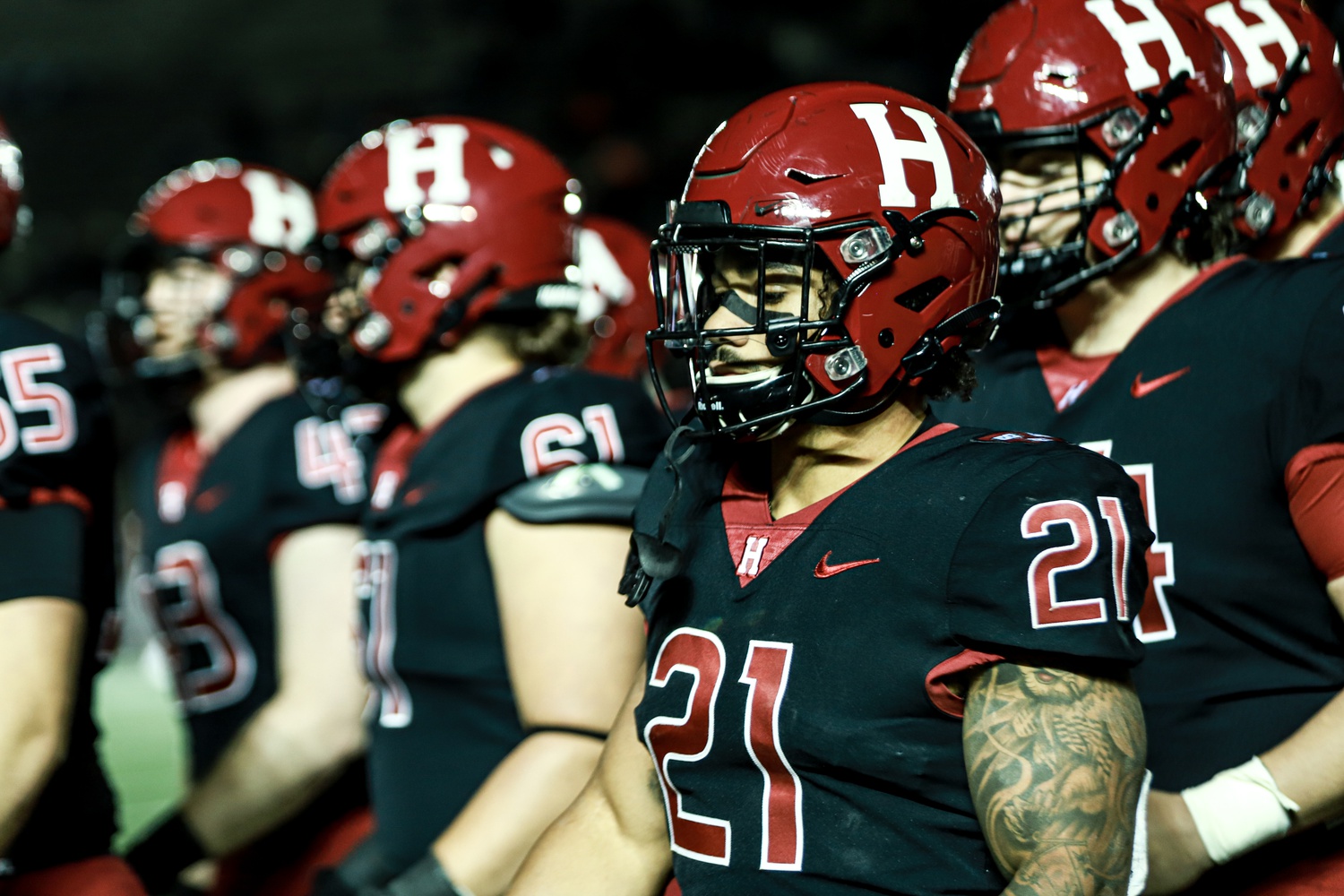 Senior running back Aidan Borguet was locked in before Friday night's contest. He had a strong showing while debuting Harvard's new black jerseys, taking his 15 carries for 96 yards. By Josie W. Chen
By Griffin Wong, Crimson Staff Writer

For Harvard football, Friday night’s clash against No. 23 Princeton (6-0, 3-0) marked an opportunity to exact revenge after a heartbreaking, controversial defeat to the Tigers 363 days prior. The Crimson (4-2, 2-1), armed with a largely different roster and donning fresh, black jerseys for the first time, hoped for a new result. But Princeton’s star wide receiver, Andrei Iosivas, proved to be too much for Harvard’s porous pass defense to handle, as the senior took his nine catches for 176 yards and a touchdown, while his co-star, Dylan Classi, added three catches for 59 yards and another score. In last week’s victory over Howard, the Crimson used a 24-0 run after halftime to pull away for a 41-25 win. However, Princeton flipped the script completely on Friday, scoring 23 unanswered points after halftime as the Tigers claimed pole position in the Ivy League title chase with a 37-10 victory. The 27-point margin of defeat was Harvard’s largest since a 52-17 loss to Princeton on Oct. 20, 2017.

“To state the obvious, we got our butts kicked,” head coach Tim Murphy said. “[I] can’t remember us being in that situation … in forever. Give tremendous credit to Princeton. They’re an outstanding football team.”

Although the Crimson entered the contest with the seventh-best rushing defense in the FCS, Princeton established the run early on, as each of its first five plays from scrimmage were on the ground. Then, on its sixth snap, head coach Bob Surace called for a trick play, suspecting that Harvard was expecting another run. After receiving a handoff, Tigers running back Ryan Butler pitched it back to quarterback Blake Stenstrom, who found Iosivas open deep down the middle of the field with no black jerseys within ten yards. The signal-caller delivered a strike, and Iosivas waltzed easily into the end zone for a 61-yard score, just over three minutes into the game. It gave Princeton a 7-0 lead that it would never relinquish, and set the tone for a dominating performance by Iosivas.

“They just kept getting shots,” Murphy explained. “Their receivers were just tremendous, starting with Iosivas.” 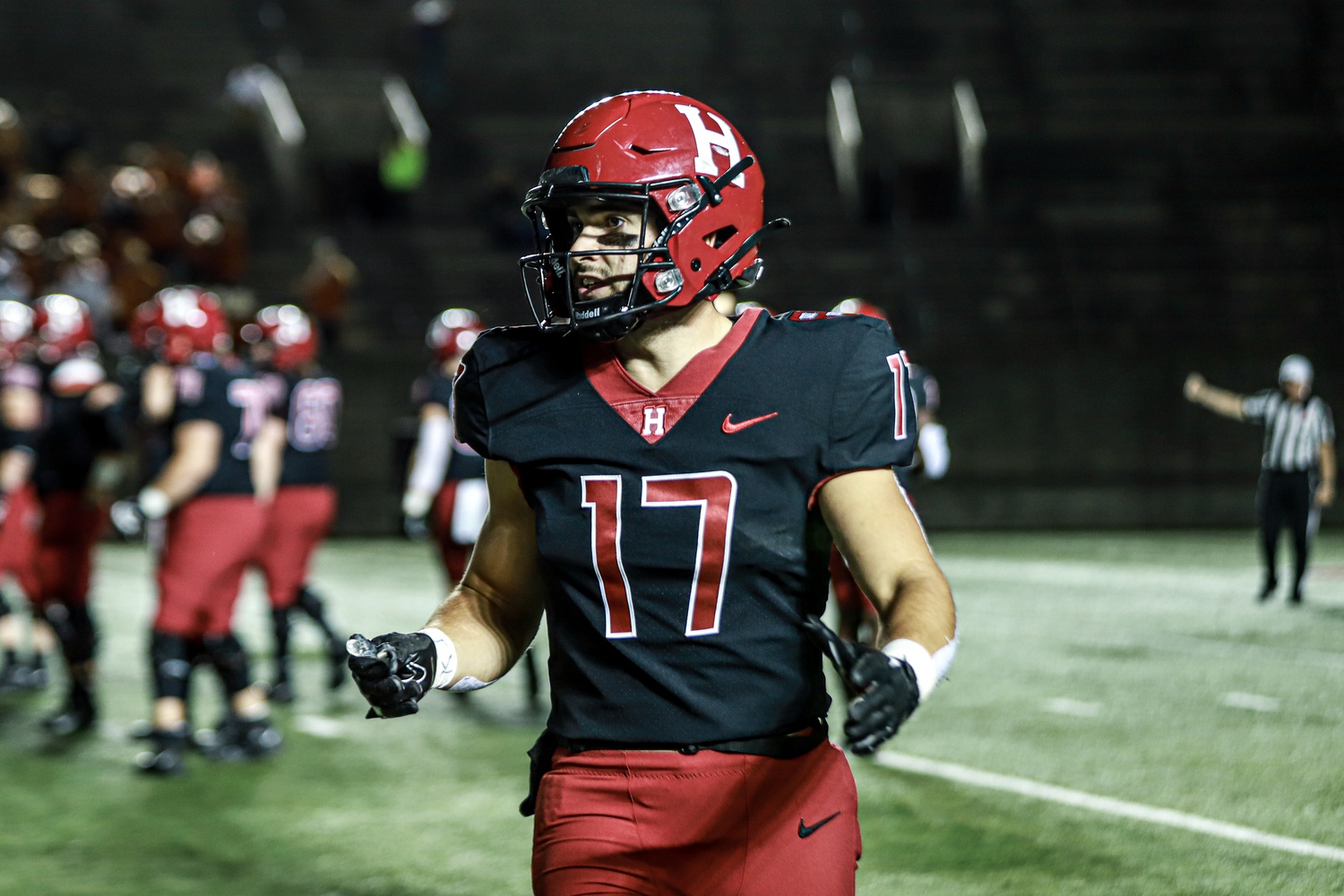 One of the few players who put up a strong performance on Friday night was senior wide receiver Jack Bill, who took his six kickoff returns for 121 yards and added two catches for another 20. By Josie W. Chen

Throughout the game, Stenstrom was in control, both on the ground and through the air. Although he had rushed for negative-four yards in the first five games of the season, Stenstrom was a dual threat from the very start of the game, scrambling 14 times for 60 yards. He diced the struggling Crimson pass defense all game, repeatedly completing well-placed deep passes over the top of the Harvard secondary. All in all, the former Colorado quarterback completed five passes of more than 20 yards, including two that went for scores. Stenstrom, who Murphy described as “probably the best quarterback in the league”, played with poise throughout the game, completing 18 of his 27 passes for 278 yards and three touchdowns despite occasional pressure from the Crimson’s talented front seven. Although the Princeton offensive line had allowed 3.4 sacks per game entering the contest, Harvard managed to bring down Stenstrom in the backfield just twice, owing to the quarterback’s scrambling ability.

“There were so many contested balls,” Murphy said. “It just seemed like the quarterback just dropped it in there perfectly, quite honestly, a lot more than we had seen on film over the past three or four games.”

Stenstrom’s counterpart, senior quarterback Charlie Dean, was never able to get much going against a suffocating Tigers defense that forced him to attempt a lot of short passes. Early in the game, Dean relied almost solely on his top target, senior wide receiver Kym Wimberly, to earn small chunks of yardage. Even on third-and-long situations, Harvard was often forced to settle for screen passes to Wimberly. Although the Slidell, La. native set a new career high with 11 receptions, his exploits were not nearly enough to overcome Princeton’s defensive front. Outside of Wimberly’s 70 yards, only junior tight end Tyler Neville was able to produce any real offense through the air, taking his five catches for 78 yards and a score. As a result of its stagnant offense, the Crimson went just three for 11 on third down conversion opportunities. The Tigers dominated possession, controlling the ball for 36 minutes, 55 seconds.

“We just didn’t sustain drives. We didn’t convert enough on third down. And their offense was on the field a long time,” Murphy said. 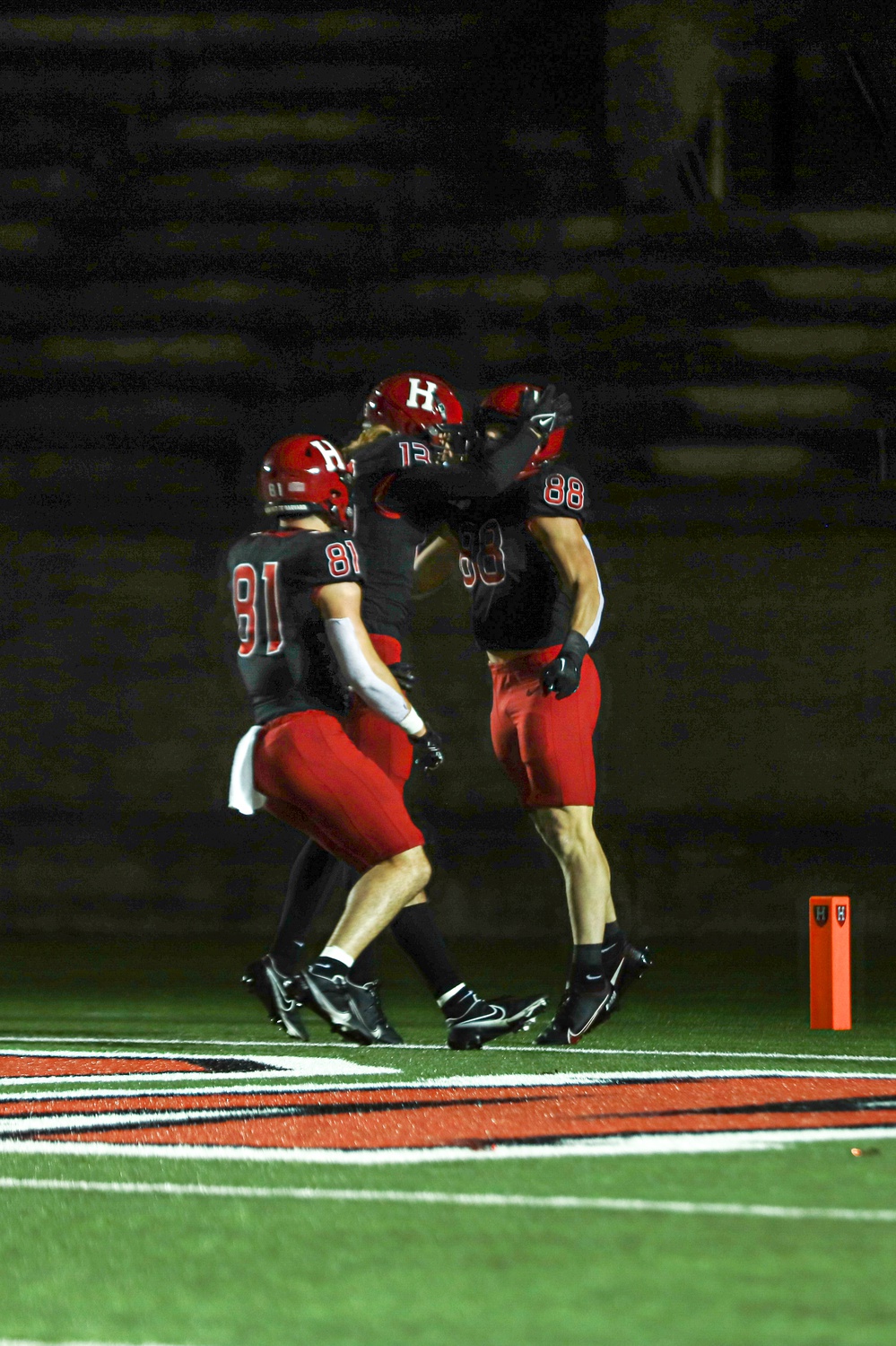 Junior tight end Tyler Neville (88) celebrates with sophomore wide receiver Ledger Hatch (13) and senior tight end Haven Montefalco (81) after his second-quarter touchdown. Neville, who hauled in five passes for 78 yards and a touchdown, was one of the few bright spots for Harvard on Friday. By Josie W. Chen

Even the vaunted Harvard rushing defense struggled on Friday night. Prior to the contest, its previous worst performance against an opposing ground attack came in the 30-21 loss to Holy Cross on Oct. 1, when it allowed the Crusaders to rack up 147 yards on the ground. Despite the Tigers’ averaging just 85.2 rushing yards per game through their first five matchups, the Crimson failed to stop either Stenstrom or Butler. The freshman has started his college career on an absolute tear, scoring eight rushing touchdowns in his first five games and earning the Ivy League’s Rookie of the Week award three times. He made a strong case for a fourth trophy on Friday, taking his 20 handoffs for 80 yards and adding a score each on the ground and through the air. All in all, Princeton racked up 191 rushing yards, the most that defensive coordinator Scott Larkee ’99’s unit has conceded since a 24-17 loss to Dartmouth on Oct. 27, 2018, when the Big Green raced its way to 320 rushing yards.

There were a few positive takeaways from the game despite the loss. Princeton entered the game as the second-best rushing defense in the FCS, behind only Columbia, who Harvard will face on Nov. 5 at home. Prior to Friday’s contest, the Tigers had conceded just 46.0 yards per game on the ground, but the Crimson managed to rack up 112. As always, the unit was led by its driving force, senior running back Aidan Borguet, who was quietly productive on his 15 carries, earning 96 yards. Friday’s game was the first time this season that the senior has failed to find the end zone. Fellow senior Sone Ntoh, who had missed the previous two games, achieved moderate success as well, turning his six carries into 36 yards. Additionally, after being one of the most penalized teams in college football through the first four weeks of the season, Harvard was flagged just four times for 15 yards. 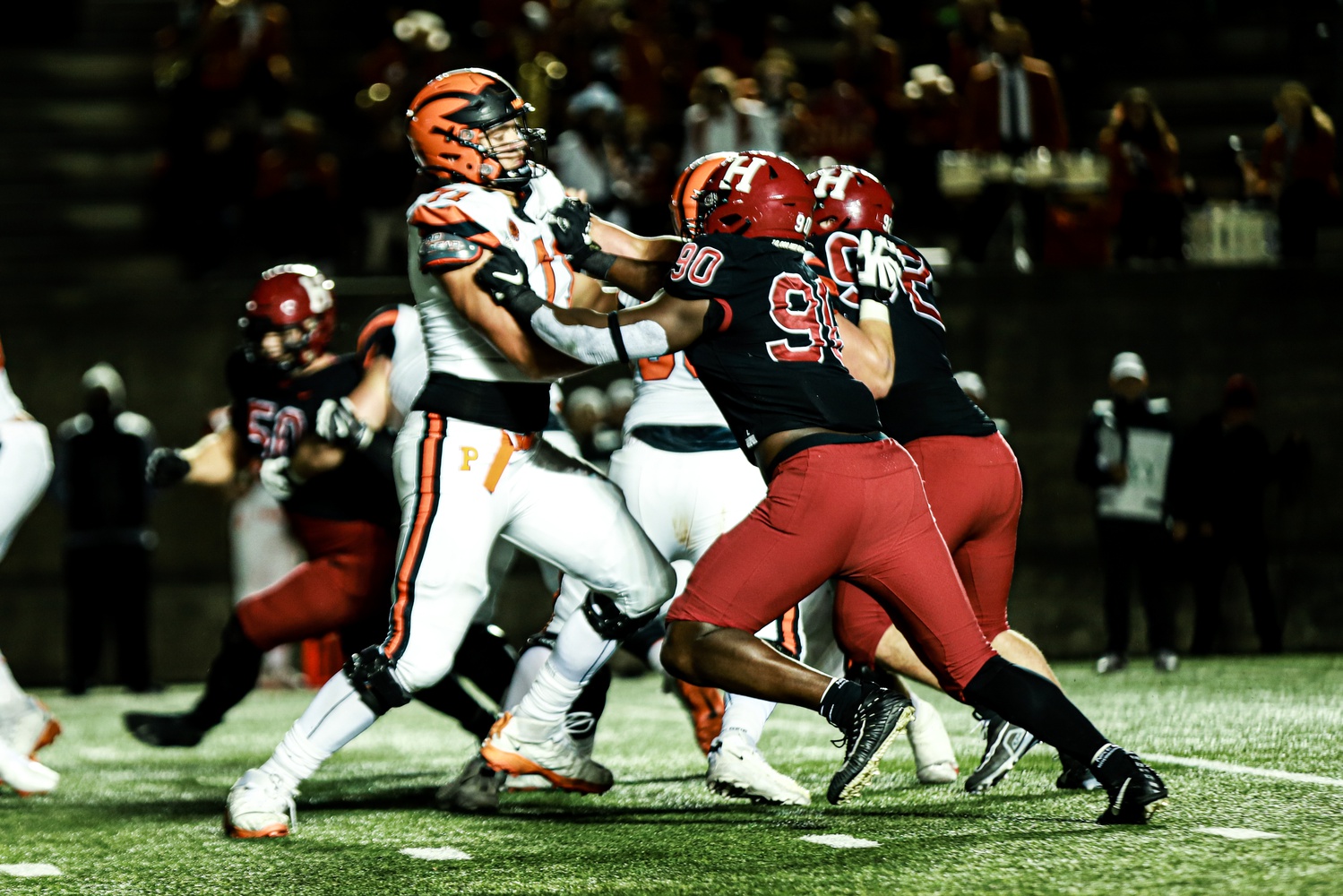 Senior defensive lineman and captain Truman Jones grapples with a Princeton offensive lineman in Harvard's 37-10 loss on Friday. Jones recorded one of the Crimson's two sacks in the loss. By Josie W. Chen

Although the Tigers currently hold the inside track to a conference title, the Crimson still has a solid chance at achieving what it has not been able to do since 2015. Last season, Princeton and Dartmouth, each with 6-1 conference records, earned a share of the Ivy League championship, with Harvard sitting just behind at 5-2. With just one conference loss through its first three games, the Crimson is not out of contention, but its remaining four games are most likely must-win situations. The road will start next week, when it travels to Hanover, N.H., to take on Dartmouth on Oct. 29. Senior defensive lineman and captain Truman Jones expressed confidence that his team would be able to bounce back from the defeat.

Although the road will be tough from here on out, resilience is a cultural pillar that Murphy has instilled throughout his 28-year career as Harvard’s head coach. The Crimson will need to lean on that value next Saturday if it hopes to redeem itself for not only Friday’s loss, but also last year’s nail-biting, 20-17 defeat at the hands of the Big Green in poor weather conditions at Harvard Stadium.