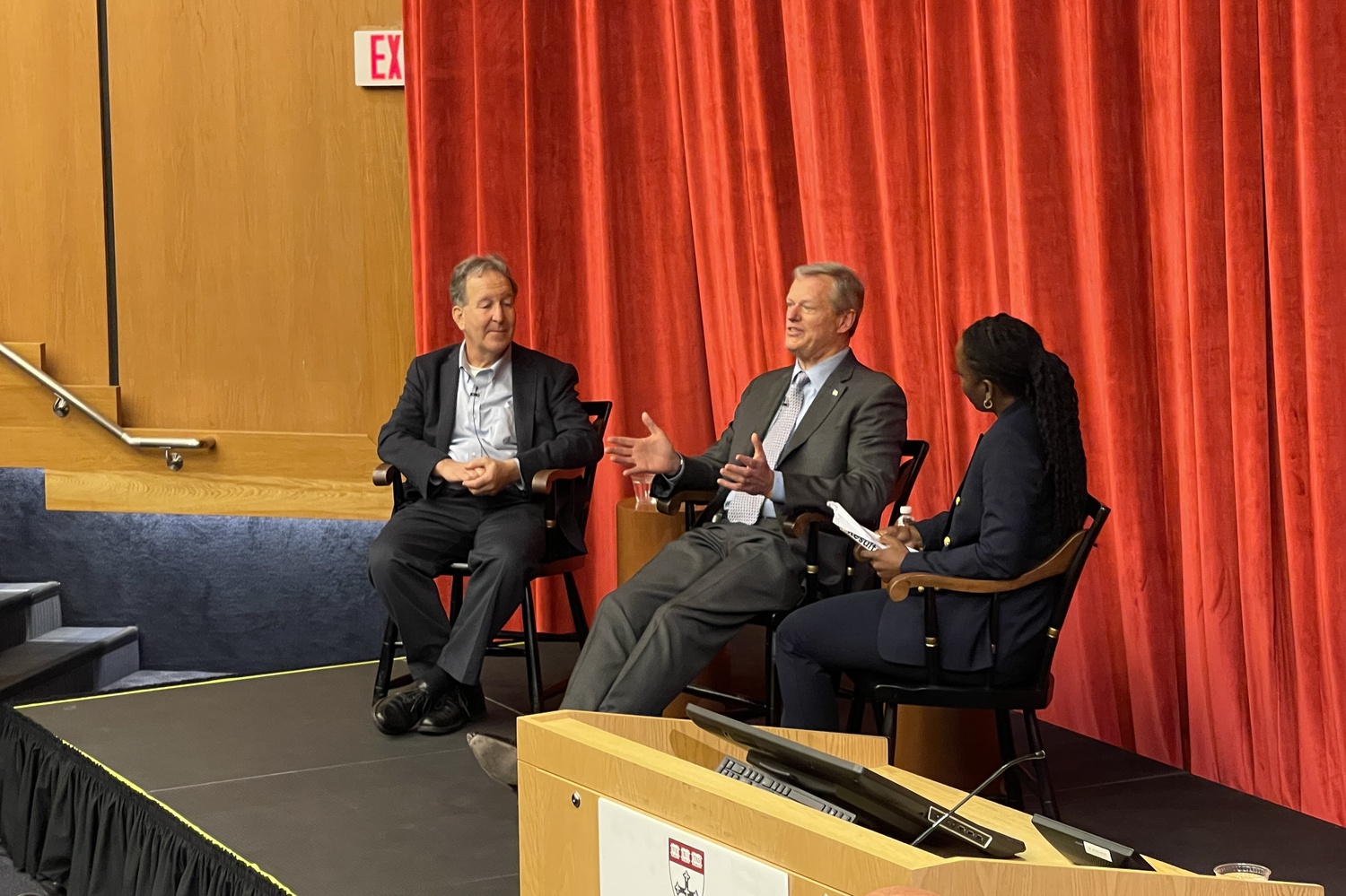 Massachusetts Governor Charlie D. Baker ’79 reflected on the state government’s response to the Covid-19 pandemic and other health policy issues in a panel at the Harvard School of Public Health on Thursday afternoon.

Baker, who has led Massachusetts throughout the pandemic, discussed navigating the challenges of lockdowns, testing, and monitoring during the rampant spread of Covid-19 with his former chief of staff, Steven Kadish, a current Harvard Kennedy School senior research fellow.

Through Baker’s second term as governor, Massachusetts experienced record Covid-19 cases, at times peaking among states in the Northeast in Covid-19 deaths per capita.

Since the pandemic’s onset, the state had reported more than two million Covid-19 cases and more than 21,000 Covid-19-related deaths as of Thursday evening, according to a New York Times database.

Despite the CDC’s collection of the genetic code of the Covid-19 virus in January 2020, Baker said the slow process in developing a test proved to be a serious challenge.

“The CDC had been given a pretty simple format to develop a test in January,” Baker said. “This was March, and we still didn’t have a test to speak of.”

“[Sudders] told us what she needed from the other parts of the state government, and then we went shopping and brought a whole bunch of people into the command center who were working in other parts of health care,” he said.

In mid-March that year, Baker said more than three million masks ordered by the Massachusetts government “disappeared” after the federal government took them to be distributed “to places they thought were more important.” In response, Baker recounted how he used the New England Patriots’ private plane to fly personal protective equipment over from Alaska.

“We did that route with charter flights seven or eight times over the course of the next couple of months to get all kinds of stuff — swabs and gowns and gloves,” Baker said.

Kadish, who served as an advisor to the governor throughout the pandemic, added that the use of charter flights to deliver supplies after the 2010 Haiti earthquake inspired the Baker administration to use the Patriots’ plane.

“We figured out when other airports were closed that if we could get people’s private charters to be filled with medical equipment and medical professionals, that they could land in the D.R. — the Dominican Republic — and then drive into Haiti,” Kadish said of the 2010 emergency response.

Asked about the pandemic’s impact on underserved populations, Baker said the state partnered with public health non-profit organization Partners in Health when planning its Covid-19 response to focus on “hard-to-reach communities.”

Aside from the virus, Baker noted food insecurity as a major issue during his tenure. He said the state used The Ride — a program that provides transportation to residents with disabilities in Greater Boston — to bring food to residents around the state.

“The Ride ended up becoming a food delivery business over that period of time — sort of like Uber Eats, but no one charges you for it,” Baker said.

“If you are boring, you don’t get follow-up,” he said.

Outside of the public health issues posed by the pandemic, Baker, a Republican, stressed that some of his more instructive experiences in government have been working with people across the political spectrum, including Kadish, who is a Democrat.

“Most of the most important lessons I’ve learned over my life come from people who didn’t agree with me,” he said.

—Staff writer Krishi Kishore can be reached at krishi.kishore@thecrimson.com.