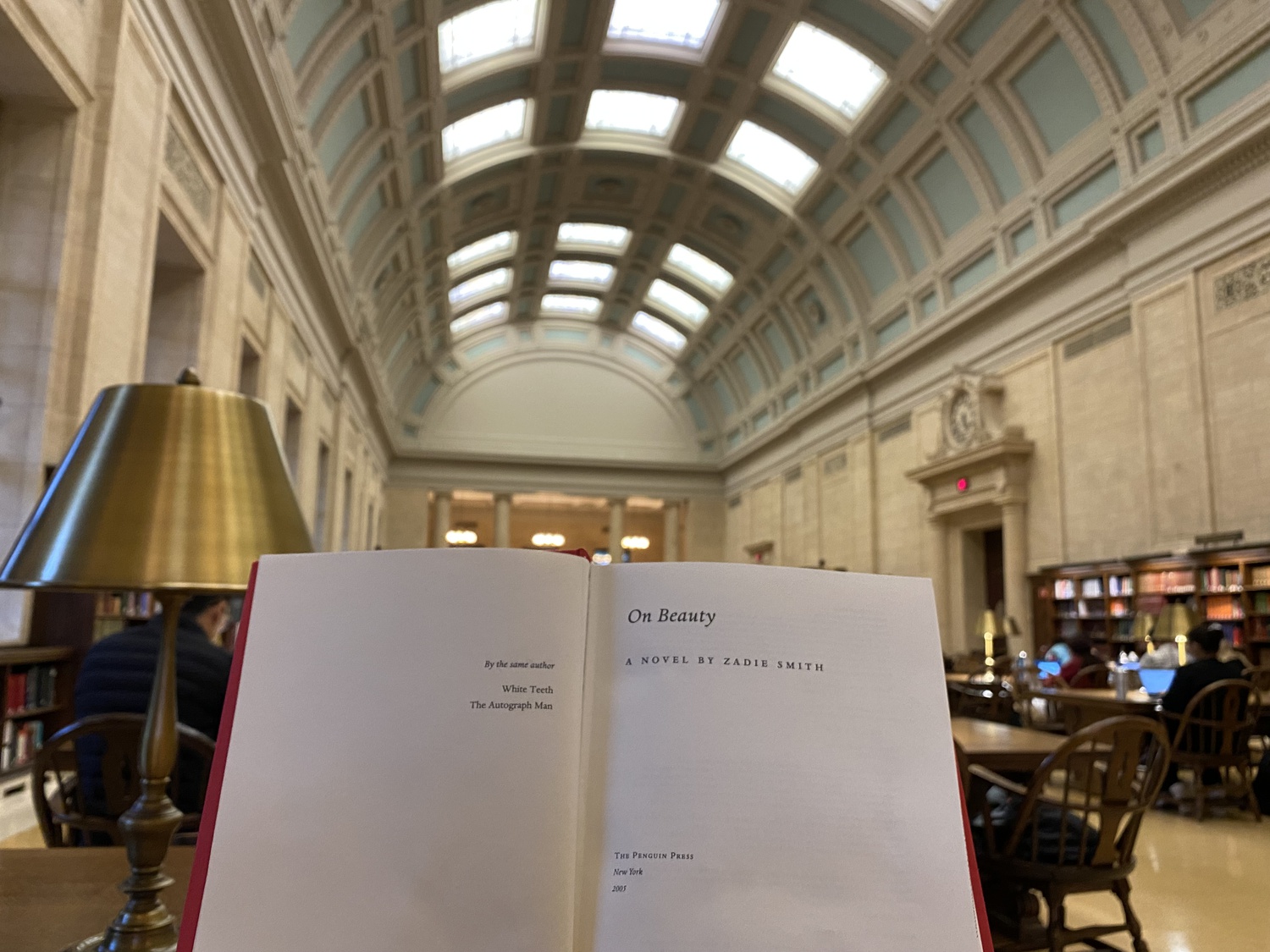 Yet as I read “On Beauty,” her wonder of a 2005 novel, I couldn’t shake the one central mystery it posed: does Harvard by any other name sound as sweet?
By Sazi Bongwe

Before I saw Harvard through my own eyes, I saw it through Zadie Smith’s. The absurdity of accepting an admissions offer from a school, a city, a state — a country — all purely from my imagination was dampened, if only momentarily, by turning the page as I turned the corner of the streets of Cambridge with Zadie (for whom a first-name basis feels right) leading the way. Before I even knew what Harvard looked like, I had sipped coffee in a campus library café with Howard Belsey — the left-wing, brave-hearted academic of British working-class origins at the centre of the novel — attended a performance of Mozart’s “Requiem” at Boston Common as one of the Belseys, and, in a way only Zadie could capture, smelled the air of entitlement and elitism that I was about to breathe.

Yet as I read “On Beauty,” her wonder of a 2005 novel, I couldn’t shake the one central mystery it posed: does Harvard by any other name sound as sweet? It was one thing to read about “Wellington College” (Zadie’s fictional name for Harvard) and another to see the “tall, garnet-coloured buildings in the New England style” she writes of for myself. What I didn’t know was that there were other ways that Zadie was bracing my 12,638 km fall from Johannesburg to Boston; that with a new country comes a new politics, as unfamiliar to me as driving down the right side of the road.

That those politics would concern me was something to which I was even more blissfully naive. I’d thought endlessly about how being Black and African made it harder for me to reach Harvard’s wrought-iron gates, but not at all that some mystical set of hands was supposedly prying them wide open for me. And I’m not centering myself here: before I could think about affirmative action in terms of the political or the personal, Zadie made it all too clear that the two are one and the same. As academic clashes with academic — Belsey clashes with Kipps — and radicalism clashes with conservatism, hope clashes with despair, optimism with naivety, joy with altruism, and love with life.

Perhaps it will only be in retrospect that my Black and brown classmates and I come to terms with the effects of having your place in this larger-than-life university called into question by the land’s highest court. Had Zadie chosen sides and written not a novel but a statement of her own beliefs about the education system, “On Beauty” might not resonate as strongly as it does today in understanding who gets into a school like Harvard, who doesn’t, and why and how. Her goal isn’t persuasion, nor even reconciliation — the two ends of the spectrum are intolerably at odds; she’s acutely aware of this. She simply wants to know: why do people think the way they do? Why are we so susceptible to the pull of viral ideas? What do our politics say about who we are? There’s a reason she called her first collection of essays “Changing My Mind.” 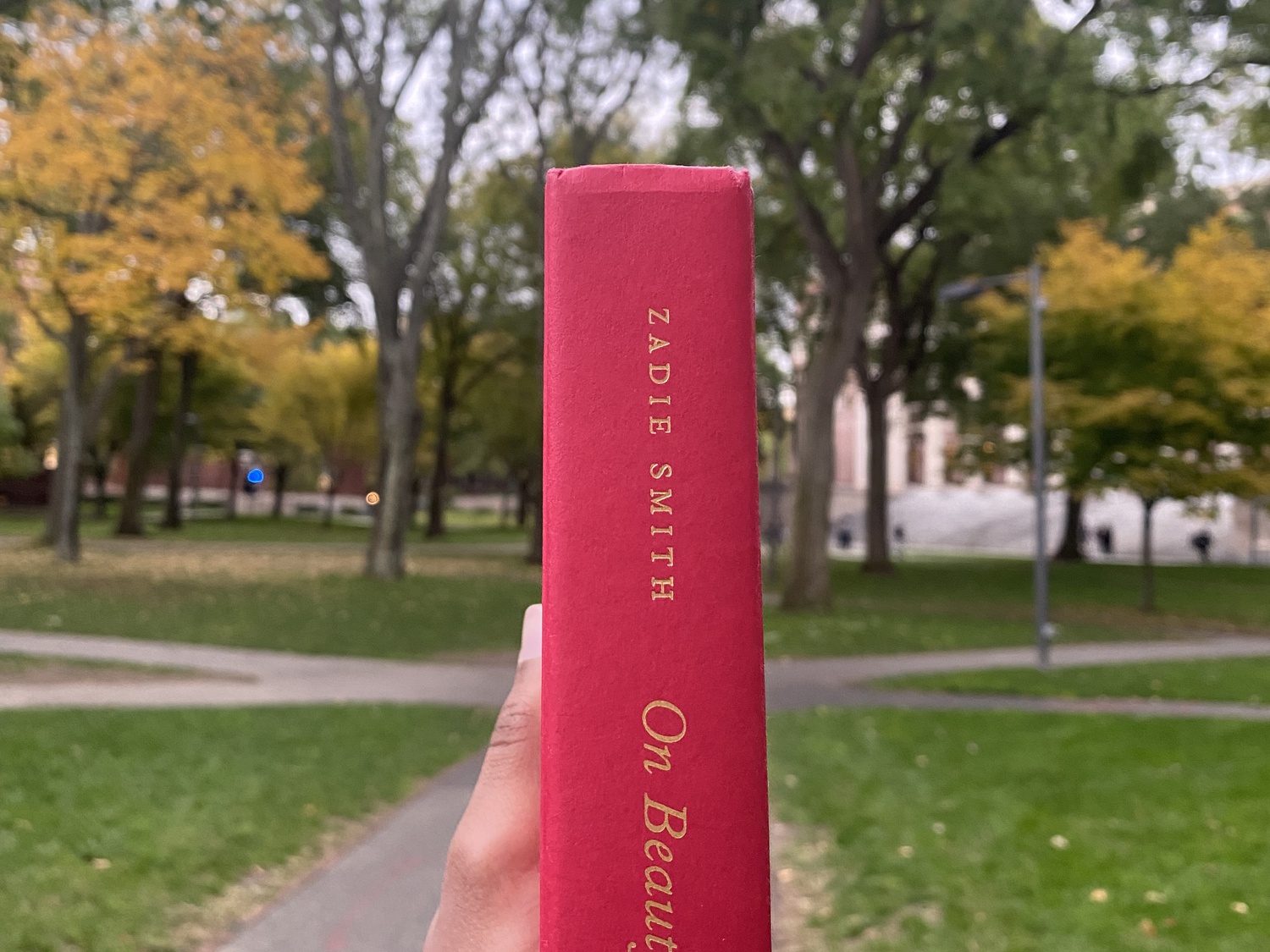 Before I saw Harvard through my own eyes, I saw it through Zadie Smith’s. By Sazi Bongwe

If there is a position that Zadie takes, it’s one that Harvard also uses in its central defence of its admissions policies: that diversity is a virtue in and of itself. How floral and lovely that sounds in the abstract: that universally accessible and therefore arguable idea that the diversity of the many enriches the one, that it is worth something far beyond syllabi and course materials to learn in an environment that looks different than the one you came from. But is it as pretty up close?

I’d so love to be a contrarian, to bask in the self-importance and righteousness that comes with opposing the establishment, to tell Harvard, “I see through you.” But in this case, it really is true what they say. Who knew that the way Turkish perpetuates patriarchy through its grammar and language is the same as in IsiZulu; that kids from Poland, Myanmar, and China could find common ground at 2 a.m. in an empty common room over having been surveilled by their states; or even that Harvard can look the same when viewed from Beirut as from Johannesburg. Who knew I could find so many different meanings and understandings and interactions of what it meant to call oneself Black in a sea of white. Who knew that I could find, in someone from an entirely culturally different country than my own, a sense of home.

None of this could’ve happened by chance. I’ve felt my world expand in ways I couldn’t have imagined precisely because of the intentionality with which Harvard picks its class, in the same way that I’d like to believe those around me have been even the tiniest bit better for hearing me talk endlessly about life in South Africa. Amongst my deepest fears in coming to Harvard — a school that, from anywhere outside of America, one only really has a mystical idea of — was that I would feel as though I was at the school but never truly of it. To find myself surrounded by 18-year-olds just as uneasy about the continental voyages they’ve just taken is a deep comfort.

In this way, Harvard’s considering identity in the class that it builds seems far less about any outward preference or discrimination or desire to actualise an abstract theory of redress than it seems purely selfish — the more pluralistic the class is, the more vibrant and stimulating it is, the more different the backgrounds its students have learned in are, the more they learn from each other here. Amid the culture war that the affirmative action debate has descended into, Zadie’s twisted account of her time here is a reminder of just how beautiful the culture itself is.

“On Beauty” is a book that poses more questions than it answers, but it’s okay with doing so. Maybe even happy to. How else do you chronicle a place as sprawling and imposing as Harvard? I thought that my first semester here would be a grand exercise in deciphering how much of the book is true of Harvard and how much isn’t, but I’m less concerned with that now. Between the factual and the fictional there is a distance, and that’s where I’ve found myself — between the land of my imagination and of my own experience of the place. Zadie gave me somewhere to begin, and I’m so grateful she did.

“A university is among the precious things that can be destroyed,” wrote Elaine Scarry in “On Beauty and Being Just,” a 1999 book of philosophy that was the inspiration for Zadie’s title. Reading “On Beauty” in 2022 is a reminder that universities are as virtuous and as enduring as the society — inside and outside — that holds them up. I’ve been reminded of that too, as I walk around and begin to locate myself here: for every right-wing frenzy that puts a target on this place, I’ve seen people around me refusing to be pulled away from their moral centres, blending their values with reason in defense of the vulnerable — beginning with affirmative action but stretching much further. That is a community I’m proud to be a part of, and that, dare I say, I deserve to be.