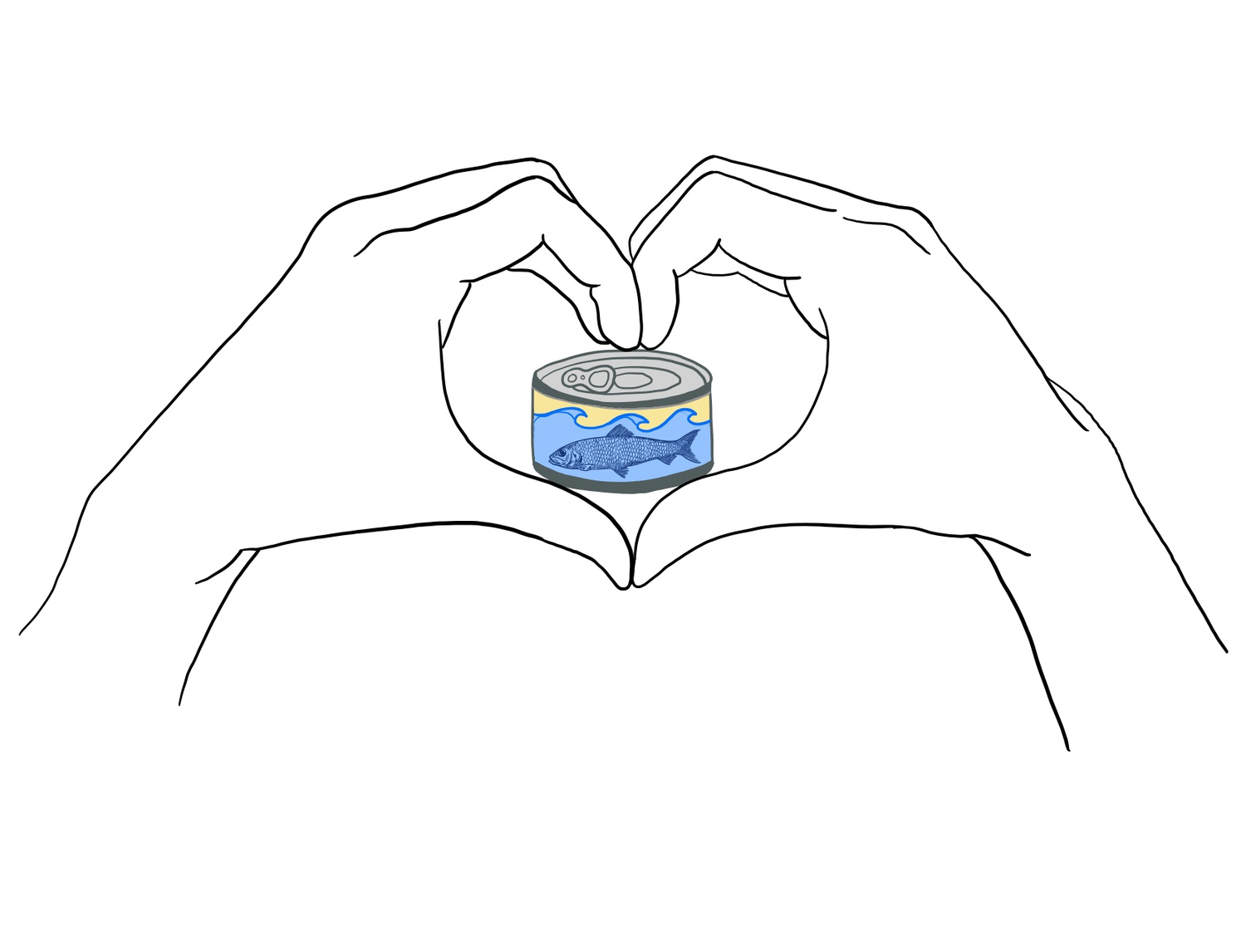 The Fish that Loved Me

Sardines were there for me when no one else was.
By Una R. Roven

I doubt I’ve ever made my father happier than when I texted him, in the throes of frugal-college-student hunger, to ask him to mail me some tinned sardines. I was living on campus for a summer research program, with a perfect view of the Charles River and an incredibly meager dining plan, and I was looking for an easy lunch that wouldn’t immediately spoil in my sweltering dorm room. He sent me back a simple ❤️.

Sardines have loomed large in my family for the last couple of years, starting in the early hoarding days of the pandemic. I remember my father sitting at the kitchen table between Zoom meetings, either hunched over a plate of sardines spread on seedy crackers, or eating them straight out of the tin with hot sauce. I think sardines reminded him of his English mother’s wartime childhood rations, conjuring a European struggle-chic aesthetic. I, silly young thing that I was, thought he was disgusting for eating something so … nonperishable. Something so stinky. My family agreed with me — especially my mother, who couldn’t handle the smell of the empty tin in the garbage bin or the sardine remnants on his breath.

I can’t remember exactly when I tried my first tin of sardines, but I do remember how I had them: between Zoom classes, on near-blackened toast, with a smear of mustard, thinly sliced red onions, and flaky sea salt. A spicy stinky oily umami masterpiece. I apologized to my father for calling him gross.

From then on, sardines became my comfort food. They were never the first thing I reached for at home, but I liked knowing that they were always there for me, should I fail to find a more conventional snack — my father always kept that particular shelf well-stocked. I tried my dad’s other favorites — mackerel and tuna — but no other fish piqued my interest quite as much.

Although I eventually came to revere sardines, I never would have guessed that the tiny fish would become a personality trait. I never thought that I would repeat the words hot girls eat canned fish like a mantra, fitting it into every conversation, mumbling it in my sleep. But from the moment I found myself opening my first 18-pack of Chicken-of-the-Sea Sardines in olive oil of the summer, bringing an embarrassing Covid-era snack into my precariously cool college life, I was doomed.

This past summer, I ate sardines for lunch every day. I’d spend each morning in the air-conditioned haven of the Smith Campus Center writing about bubonic plague. When the clock struck 1 p.m., I’d take my lunch break on the sunny deck, crack open a tin, and eat the fish with grainy dijon and sourdough. It was a sensory experience — olive oil seeping through the holes of the bread and down my wrists — that made me feel like a mysterious, independent, hot girl. Almost immediately, I began to spread the sardine gospel, telling everyone how well I was eating for such little money. And how they never go bad, either!

Unbeknownst to me at the time, my love story with sardines coincided almost perfectly with the Tinned Fish Renaissance. The hors-d’oeuvre-ification of tinned fish has taken TikTok by storm, appearing on charcuterie boards, lists of date night ideas, and salads. Videos like the ones from user @alihooke turn tinned fish into the essence of luxury, with ASMR-like clips of gorgeously packaged mussels and tuna alongside farmers’ market veggies and natural wines. Sardines are also the perfect college student lunch. Although brands like Fishwife have scaled up the glamor of tinned fish, most options remain incredibly cheap for the amount of nutrients they deliver — my go-to costs just over $1 per can.

Sardines are a magical fish, but we’ve known this for millenia. Some sources trace their name back to Sardinia, a Mediterranean island where they were abundant. When canning technology was developed in the early 1800s, sardines became cheap and accessible around the world.

Sardines have also had a distinct impact on world culture. The phrase “packed like sardines” has been dated to the mid-19th century, and the game Sardines (essentially the opposite of hide-and-seek) has been around since 1924. Sardines are also some of the healthiest fish around, loaded with proteins, minerals, vitamins, and one of the highest concentrations of omega-3 polyunsaturated fatty acids of any commonly eaten fish.

So why the stigma? Perhaps it’s because sardines seem like a food that’s designed to outlive you. The tins don’t expire for years, so cracking one open means you must have exhausted all your other options. If you eat them without adding any other flavoring (or, God forbid, buy them in water), the sheer fishiness of them can be overwhelming. And do I even need to mention the smell?

Yes, sardines can be gross — but that’s only if you don’t know what to do with them. By now, I’ve made every mistake in the book. I’ve bought the wrong kind — for some reason, Trader Joe’s sardines are needlessly massive, and being forced to hear yourself crunching their spines in your teeth is just wrong. I’ve eaten them plain — naked sardines scream out for mustard, hot sauce, or anything sharp, spicy, or crunchy. I’ve disposed of them improperly — a freshly opened sardine tin is fine, if slightly pungent, but letting the fishy oils rot in a garbage bin too close to you is dangerous. I once absentmindedly threw out a tin in my shared hallway bathroom, and the next day the entire floor smelled like the depths of a severe yeast infection. Lesson learned: tins straight to the garbage room.

Once you get into the sardine groove, though, it’s hard to go back. There’s nothing like the smooth metallic pop of an opening tin. The fireworks of healthy fats in the very first bite. These oily fish fill my dreams. Despite their minor faults, I have never before fallen so hard for a food. Sardines were the highlight of my summer. Sardines made me happy like no other food could. Sardines were there for me when no one else was.