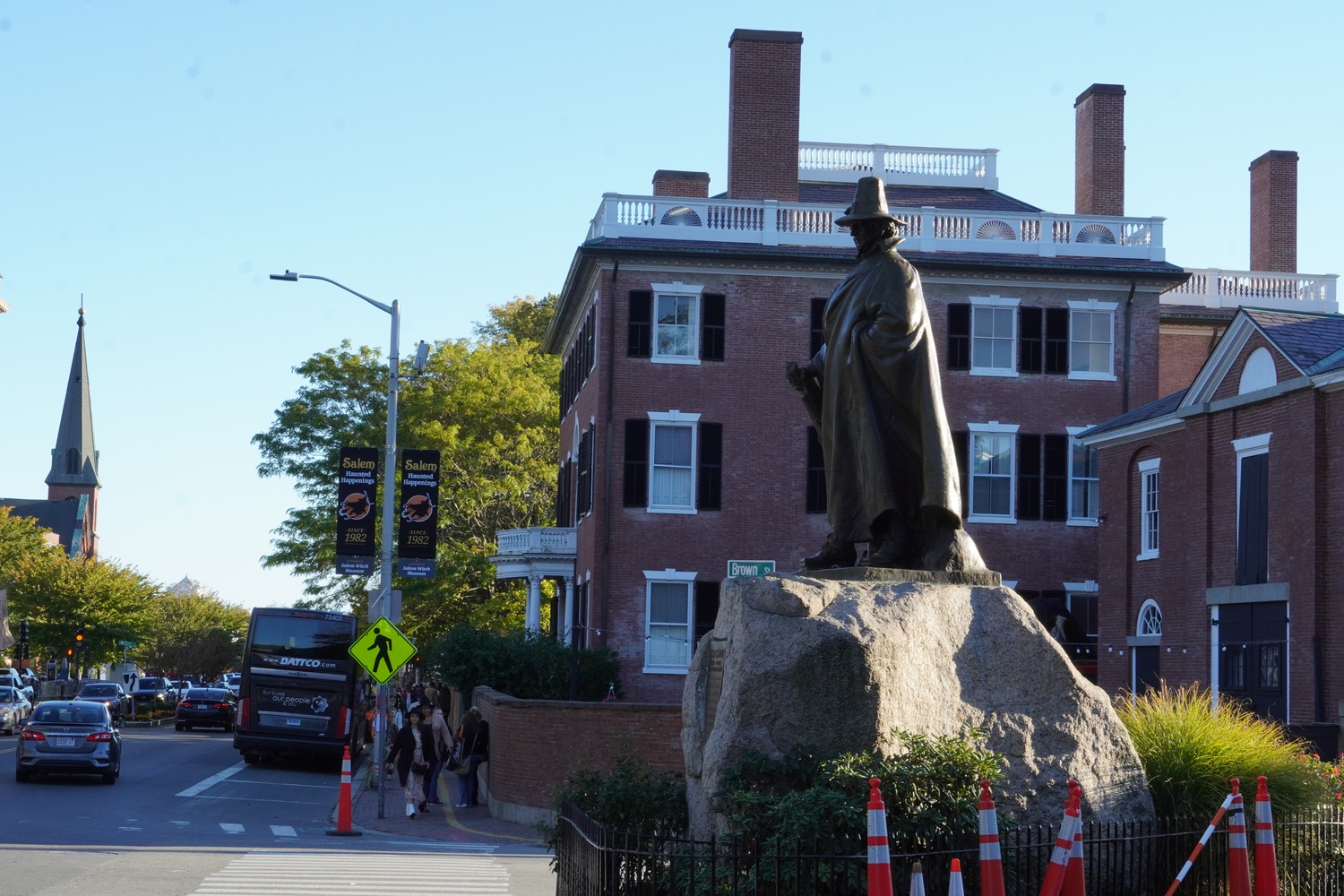 A statue of Roger Conant, who founded Salem in 1625. In addition to a popular Halloween destination, Salem is a residential town — and the site of a historical tragedy. By Brandon L. Kingdollar
Advertisement
Advertisement

Salem doesn’t dictate a singular impression to its visitors. It offers multiple entry points: to shop, to learn, to reflect, to live.
By Jem K. Williams

SALEM, Mass. — For those seeking a quiet day trip, coming here on a Saturday in October is a mistake. Copious traffic can be a nightmare to navigate, and the commuter rail will undoubtedly be packed to the brim with people dressed up in tones of black, brown, or olive green. The crowd would probably look the same if the train car was headed for a convention for hair dye, cartilage piercings, or tote bags.

The crowd is most likely headed to celebrate spooky season in the historic city — where, in 1692, 20 people were executed on charges of witchcraft. October is by far the most profitable month for the town’s tourism industry. This celebration, dubbed “Haunted Happenings,” is marked by orange banners hanging from the city’s light posts, merchandise displaying witch caricatures, and endless vendors of metaphysical supplies lining the streets. 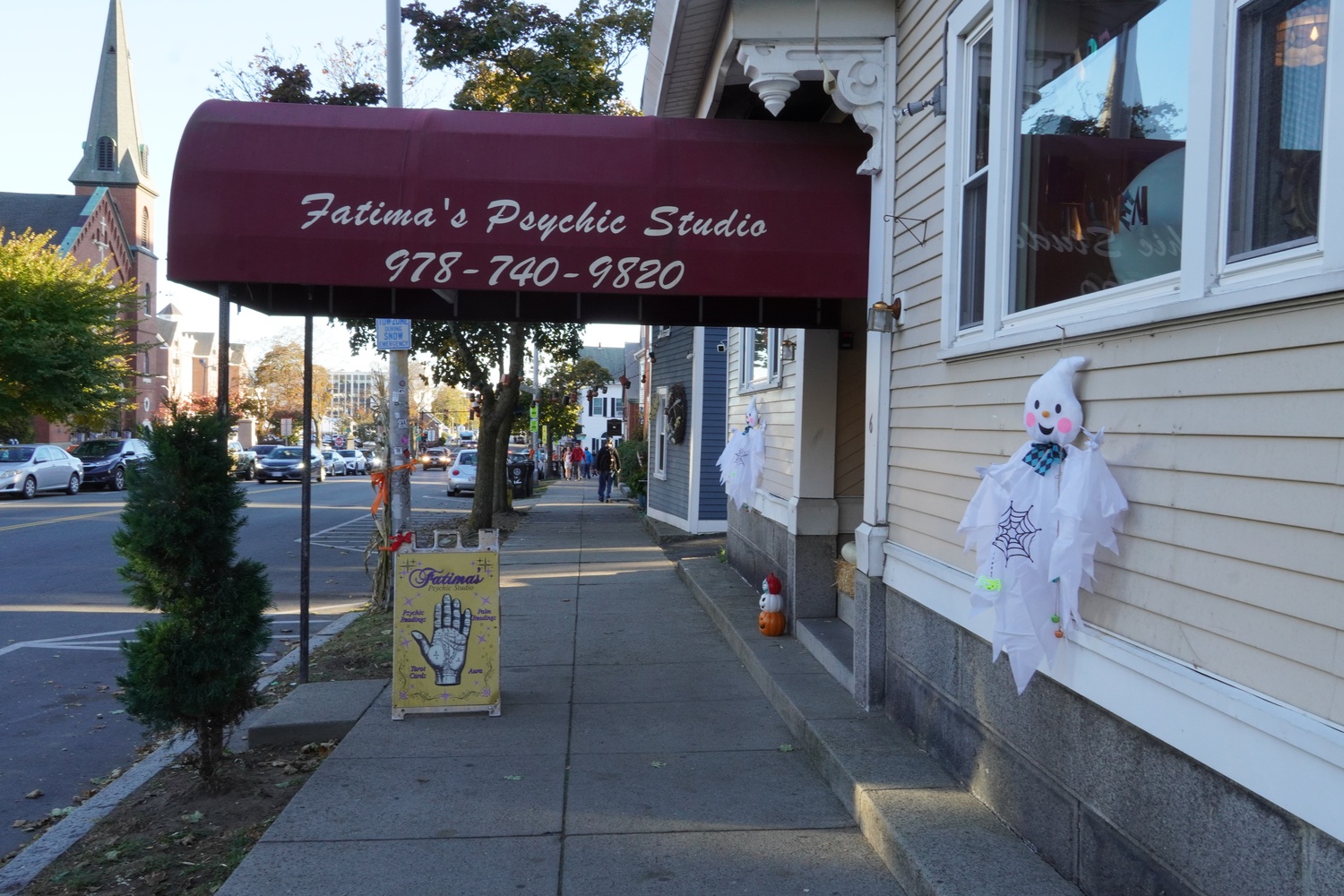 A view down Hawthorne Boulevard in Salem. By Brandon L. Kingdollar

Even the tourists are dressed up in wide-brimmed hats and dark lipstick — the number of women in witch hats is too many to count. The Halloween spirit will smack you in the face as soon as you pass City Hall walking South on Washington St., probably immersed in a flock of tourists.

At the end of the day, though, Salem is not just a popular destination for those seeking Halloween festivities. It’s a residential town where the buildings aren’t much taller than the highest church steeple, and it’s the site of a historical tragedy.

“There are several museums and attractions where you can learn more about the witch trials when you’re in Salem,” says Kate L. Fox, executive director of Destination Salem. “That history is something we hope people take something from when they’re here, but in October the visitation is often much more focused on having fun.”

As Zachary S. Jacobsen, an employee at the Magic Parlor and practitioner of witchcraft, puts it, “The atmosphere of Salem depends on who you are. For some people, they might find it very loud and very in your face. For others, they find it to be exciting.” 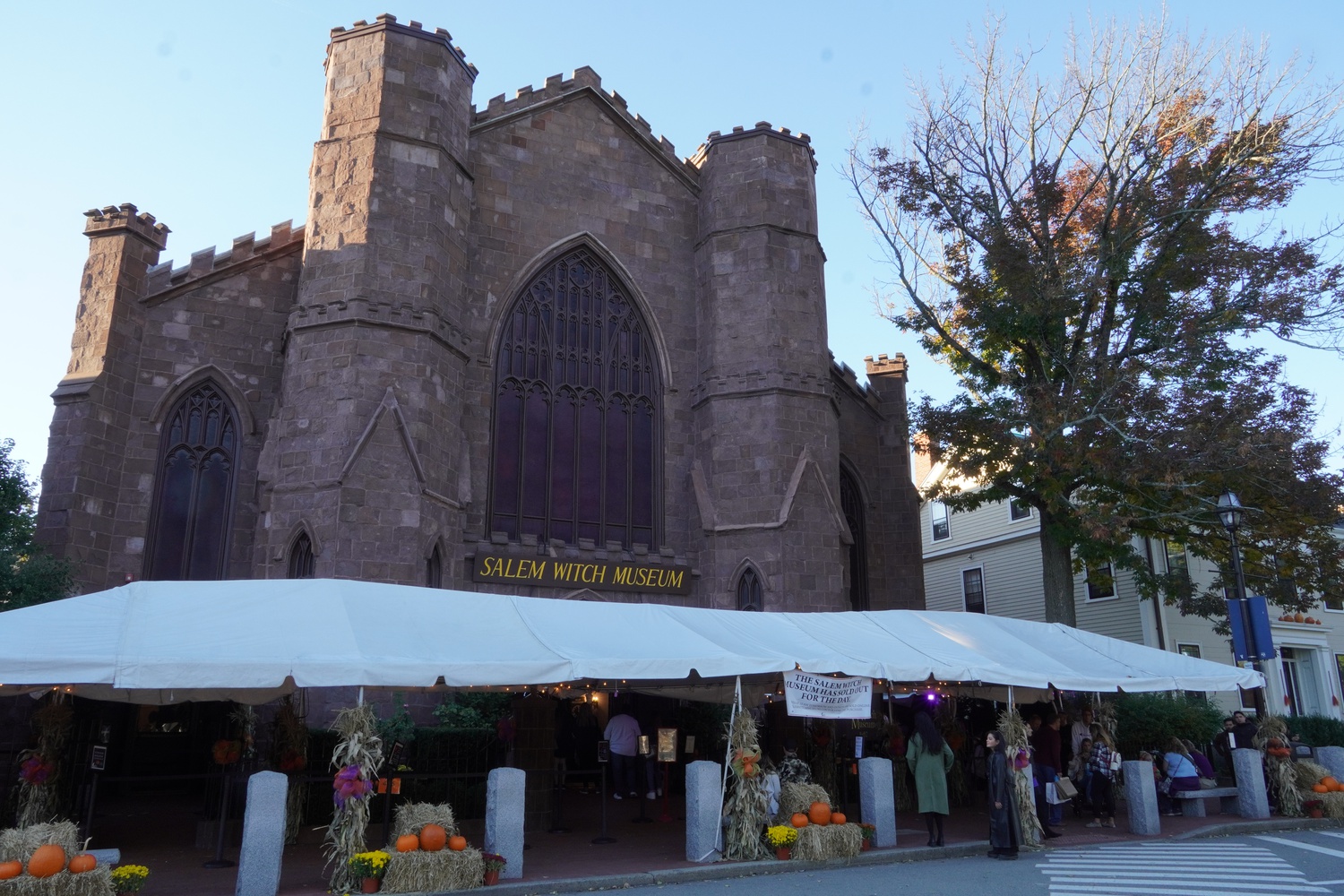 The Salem Witch Museum documents the Witch Trials of 1692. The city is now a tourist attraction for history buffs and Halloween enthusiasts. By Brandon L. Kingdollar

Something else that will hit you is the contrast between the celebration and the history. One minute, you’re on Essex St. listening to someone perform a drum solo on a set of upside down buckets and metal dishes — one so surprisingly good that they periodically exclaim, “It’s working!” But then, as you walk down the path that connects Essex to Charter St., the music fades, and by the time you reach the other side of the block, the beat is gone.

There, at 51 Charter St., you’ll find the burial ground. It’s one of the few places in Salem where a musician hasn’t set up shop. The air is heavier and the history becomes more apparent. There are still people talking — albeit a bit quieter at the sight of the tombstones — but it feels silent.

The memorial, a stone wall with slabs jutting out, sits in front of the burial ground. On each slab is inscribed the name of a witch trial victim and how and when they were killed. For Giles Corey, whose inscription reads “pressed to death,” a few stones rest on the slab — offerings from tourists that have passed by before. 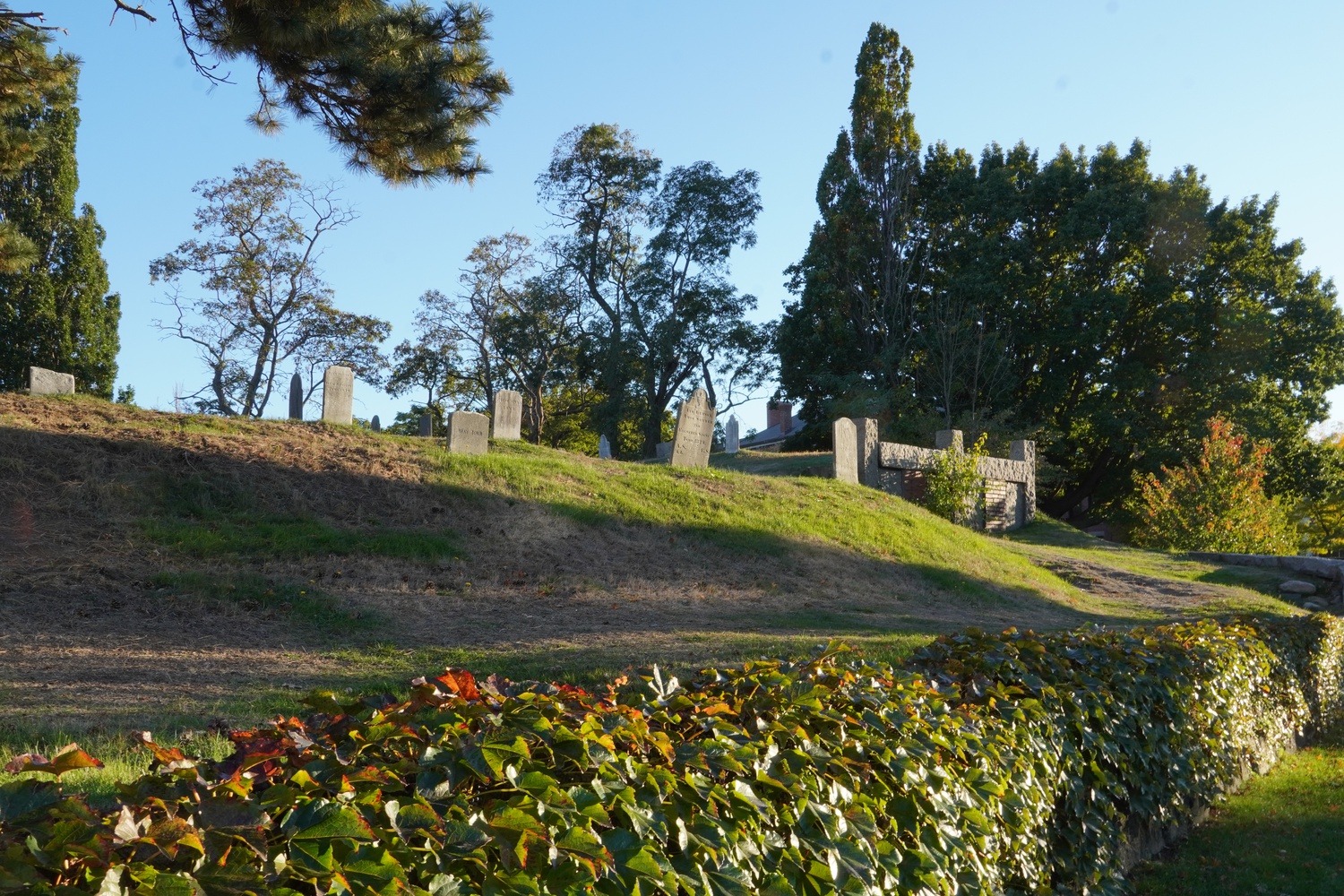 Tombstones at Salem's Howard Street Cemetery, said to be the site where Giles Corey was pressed to death during the 1692 Witch Trials. By Brandon L. Kingdollar

Salem’s history is displayed both at this memorial and at the plaque on the corner of Front St. and Washington St., an installation by the nonprofit Voices Against Injustice. It is inscribed with a quote from Holocaust survivor Elie Wiesel: “The opposite of love is not hate, it’s indifference.”

East of the burial ground lies yet another facet of Salem — the residential area. It’s hard to imagine, especially in the midst of the October crowds, that anyone could live in Salem without having their peace interrupted by rambunctious tourists, music at all hours, and unmanageable traffic.

But the municipality of Salem largely keeps the crowds away from the houses, guiding tourists with painted yellow lines on the sidewalk that lead them between destinations. The city also keeps the noise to a minimum by only allowing performances on certain streets and at certain decibel levels — keeping tourism “confined to one month,” Fox says.

“We have a lot of people who are descended from victims of the trials who come to Salem,” Fox says. “Some come during the rest of the year when it’s not October, and they do that on purpose because they don’t want to get involved in the Haunted Happenings revelry.” 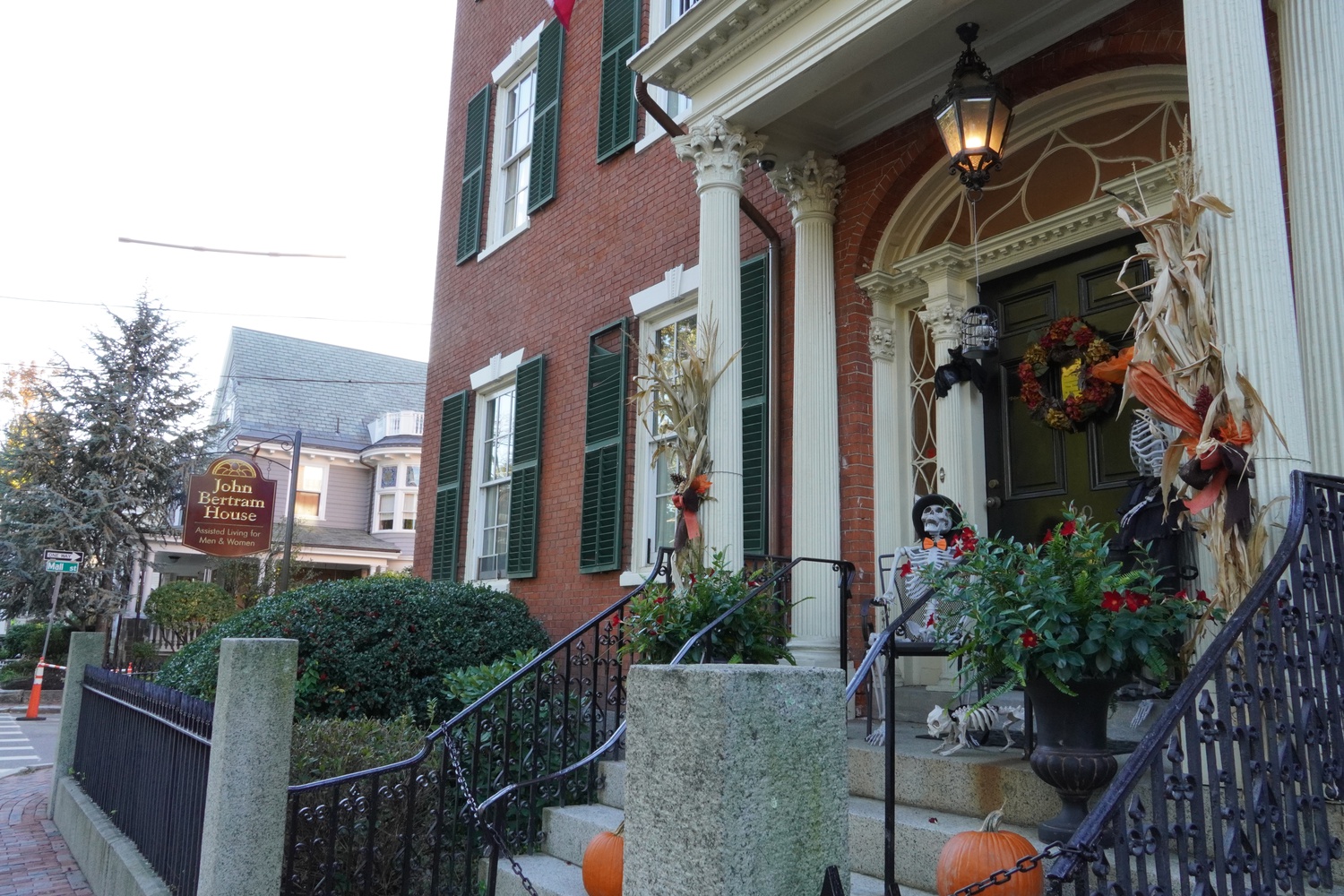 Skeletons and autumnal accoutrements decorate the front step of a house in Salem. By Brandon L. Kingdollar

Jacobsen sees Haunted Happenings as a celebration of the victims. Rather than exploiting a tragedy, the modern visitors and vendors of Salem flourish in the city’s unique culture. “The persecuted have become the populace. This is now Witch City,” he says.

Salem doesn’t dictate a singular impression to its visitors. It offers multiple entry points: to shop, to learn, to reflect, to live. The relationship between residential, historic, and commercial Salem is best summed up by Fox, who says, “There’s a lot going on, and I always like to say that those three themes operate on parallel paths. And sometimes they’re very close together, and sometimes they’re further apart.”