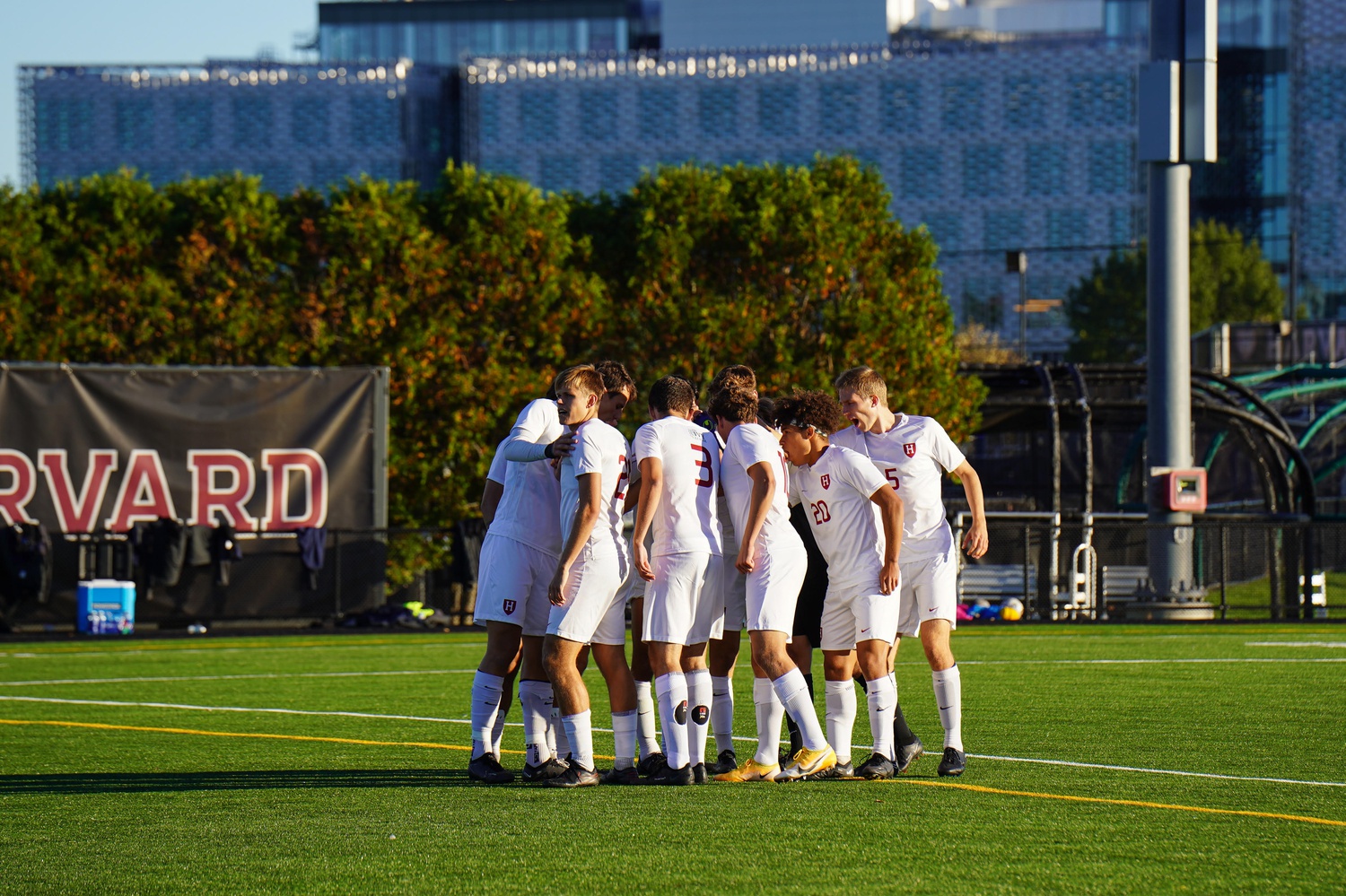 The Crimson breaks a huddle in Saturday’s stalemate against Columbia University. The team plays Brown next weekend. By Samuel M. Bennet
By Maddie B. Barkate

The Harvard men’s soccer team (5-4-2, 0-1-1) met Columbia at home this past Saturday while on the hunt for their first Ivy League win. Although the Crimson led for most of the hard-fought contest, the Lions were able to net one in the second half, ending the game tied 1-1.

The first goal of the game came quickly for Harvard. Junior defender Nik White scored his third goal of the season off of a stellar corner kick from junior midfielder Willem Ebbinge at the 3:21 mark, putting Harvard up early. Ebbinge is now at a team-best 6 assists on the season, also leading the team with 12 points on three goals and six assists. He is one of the Crimson’s most consistent players, marking points in most of the games this season.

Unfortunately for Harvard, immediately after White scored, he went down with an early injury. Although this was a big blow for the Crimson, they rebounded quickly, keeping Columbia to only one shot on goal in the first half, which senior goalkeeper Oskar Nilsson knocked away with an impressive dive. The defensive players for the Crimson have been steady this season, only allowing 16 goals to Harvard’s 22 goals.

A particular bright spot for the Crimson is sophomore defender Jan Riecke, who once again played all 90 minutes of the competition, bringing his total tally on the year up to 990 minutes. White has been another important player for Harvard, playing most, if not all, of many games and contributing 3 goals and 1 assist. His 7 points place him fourth on the team, behind sophomore forward Alessandro Arlotti, senior forward Martín Vician, and Ebbinge.

Harvard entered the second half up by 1, which was almost extended by Vician early on, but thanks to a great effort from Lions senior goalkeeper Michael Collodi, he was denied from adding to his 5 goals on the season. The game continued for around 10 minutes, until Columbia made it a tie game off of first-year midfielder Joao Lima, who laid in an assist from teammate first-year midfielder Ryan Yang. Yang regained a failed clear, passed it though to Lima, who corralled the ball quickly in order to sweep it past Nilsson and knot the game.

Columbia’s Lima has had a strong season so far, earning Ivy League Rookie of the Week honors off of his performance at Harvard, in which he had his second goal of the year. A Harvard first-year has earned this honor in the past, midfielder Matus Vician, for his performance in Harvard’s 6-0 win over Fairfield on Sept. 24th, in which he posted four points off of one goal and two assists. The younger brother of senior Martín Vician, Matus Vician is making a name for himself early for the Crimson. 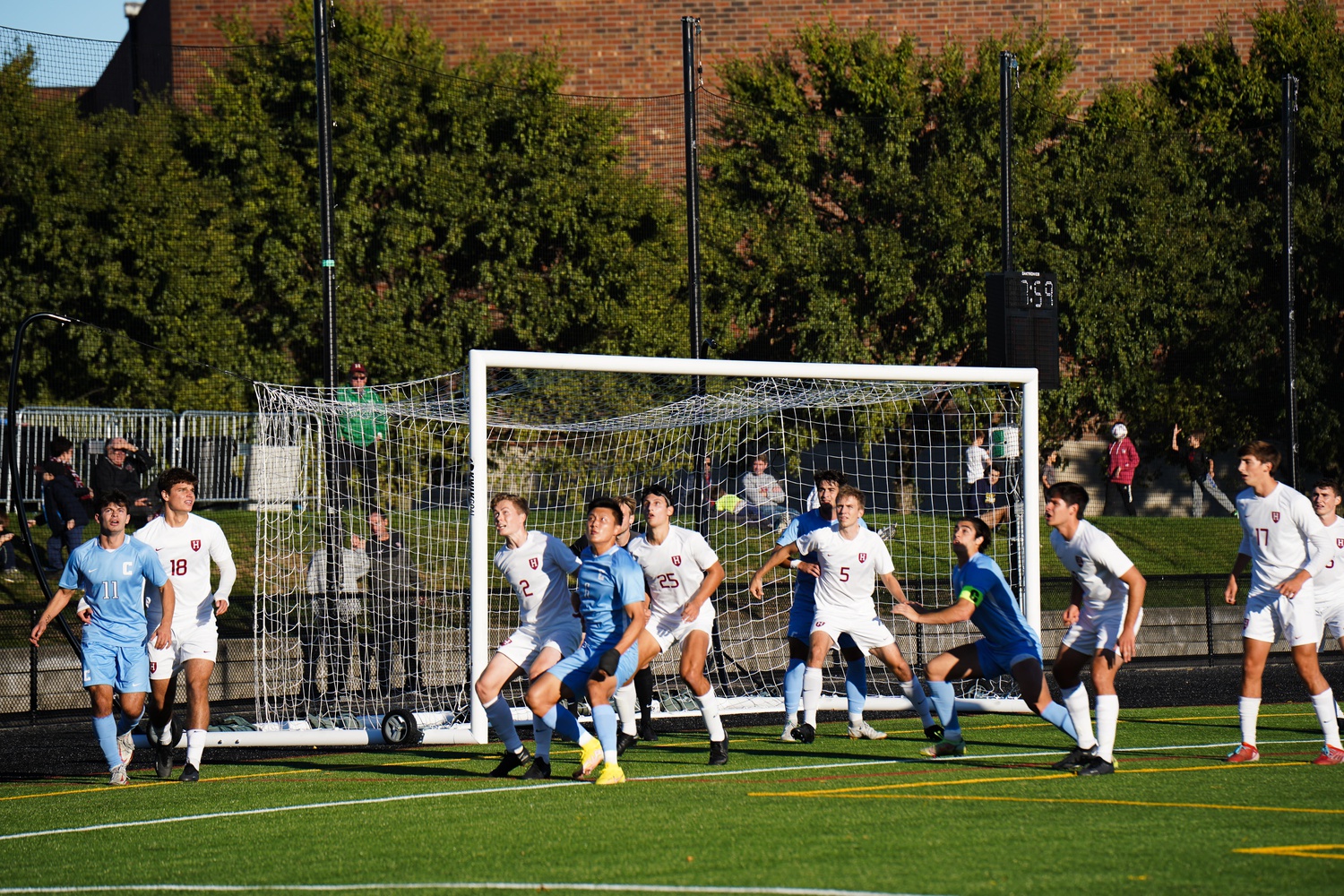 Three Harvard defenders guard the goal against a corner kick from Columbia. The teams tied 1-1 on Saturday. By Samuel M. Bennet

However, the game only got more exciting. Both teams had several other chances to end on top in the last few minutes. Sophomore defender Kristján Gunnarsson almost was able to put the game away for the Crimson in the 73rd minute after sprinting up the right side of the field. However, the shot sailed wide of the net with minutes to play. Nilsson’s goalkeeping skills were on full display in the final five minutes of the game, as he had to come up with two remarkable saves. His last save was one of his most impressive, barely reaching a shot from 15 yards out off the foot of Columbia’s Lima. A relief for Crimson fans, he delivered on all three of his saves, maintaining the tie for Harvard.

This result moved the Crimson to 39-26-6 all-time against Columbia.

Ebbinge and Nilsson both played well for Harvard. Ebbinge, besides his assist to White, provided many opportunities for the Crimson, while Nilsson made several notable saves in order to keep Harvard in the game. However, it was a team effort, as the Crimson controlled most of the possession during play and proved itself to be a composed and competitive team.

Harvard now looks ahead to the rest of its season, with which the exception of Holy Cross on Oct. 18th, will be all in-league play. After one loss to Cornell and this tie to Columbia, the Crimson is facing several must-win games in order to still have a shot at the Ivy League title.

The Crimson will continue its quest for its first league win on the road against the Brown University Bears this Saturday, Oct. 15.